China's Futuristic Library from Community of Lights on Vimeo.

China opened the doors of its new, futuristic library in November, 2017. The Tianjin Binhai Library, located just outside Beijing, features a luminous spherical atrium with bookshelves lining the walls, from floor to ceiling. What looks to be a book lover's ultimate fantasy could ultimately house 1.2 millions books. Dutch architectural firm MVRDV collaborated with Tianjin Urban Planning and Design Institute (TUPDI) to create the five-story space that resembles a three-dimensional eye from the outside. From the first sketch to its opening, the project took three years to complete. 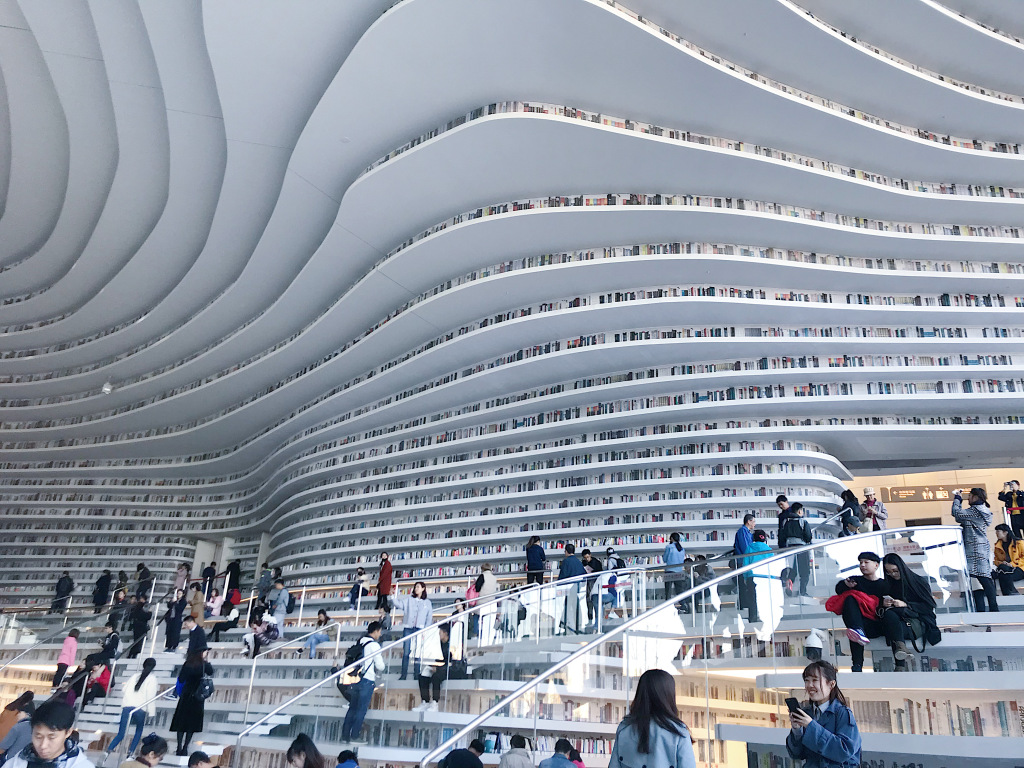 The massive bookshelves that contour the library's walls, rolling across the ceiling like waves, were designed to hold more than books. Visitors can walk among them. 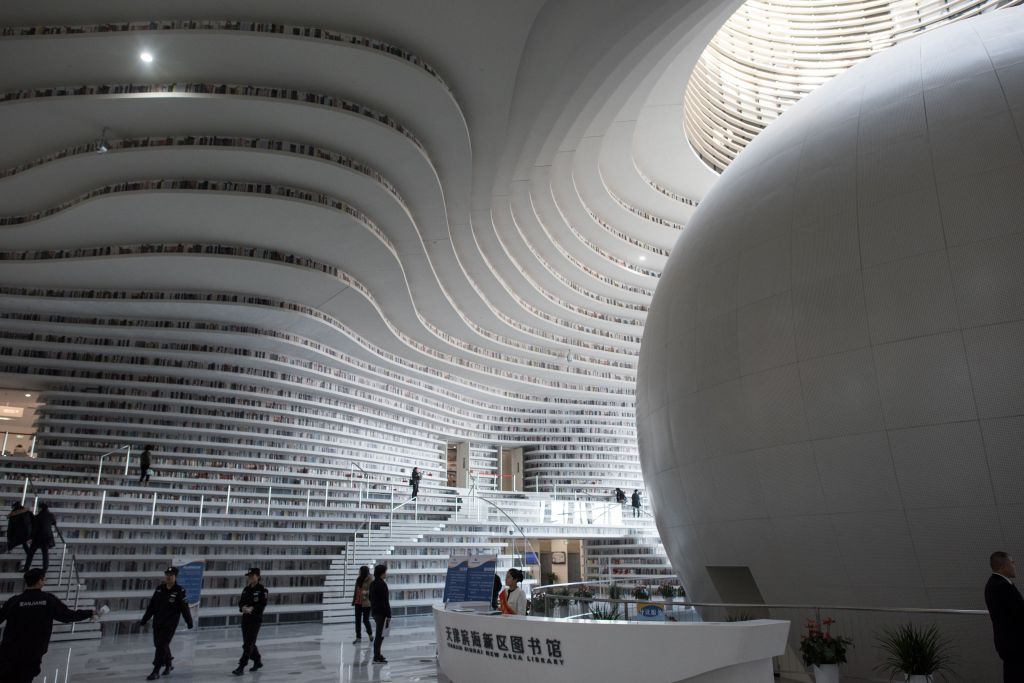 "The angles and curves are meant to stimulate different uses of the space, such as reading, walking, meeting and discussing," Winy Maas, co-founder of MVRDV explained. "Together they form the ‘eye’ of the building."Though some shelves contain stacks of books, others have printed aluminum plates that mimic books—a feature that has prompted criticism that the much-touted space is "more fiction than books." 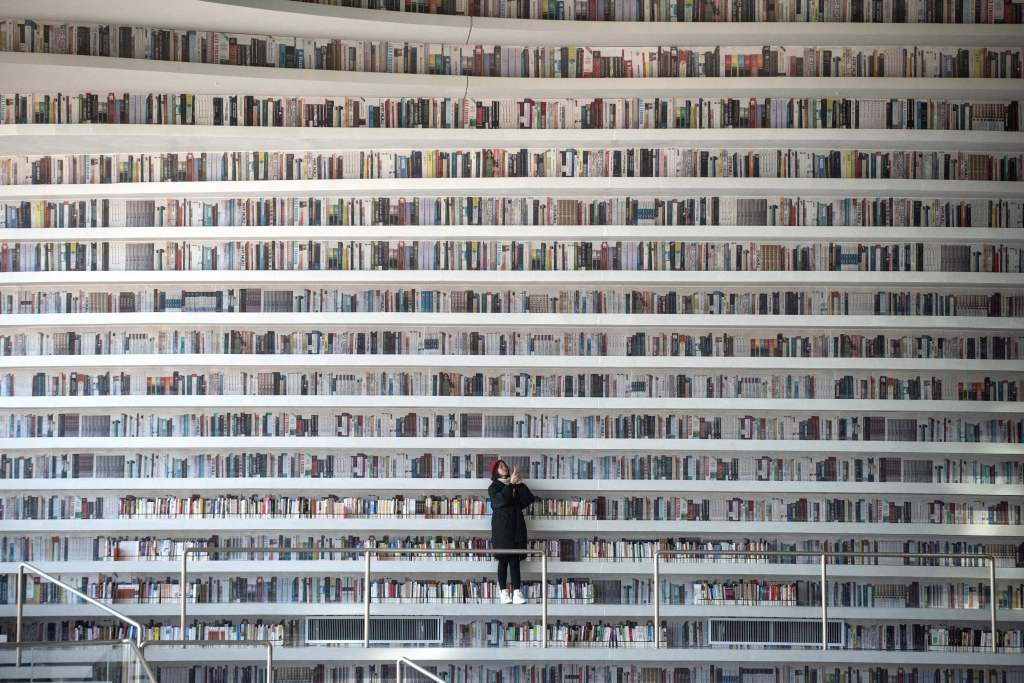 Much of the library's book collection is housed in other rooms. Nevertheless, the atrium is a spectacular feat of design and, as such, has already attracted an average of 15,000 visitors on weekends.

The library is anchored by a giant spherical structure in the center of the space. The surrounding bookshelves curve and ebb around the sphere, all the way to the ceiling. This gives visitors the sense that they are walking inside an eye, an illustion that has inspired the library's nickname: "The Eye of Binhai." 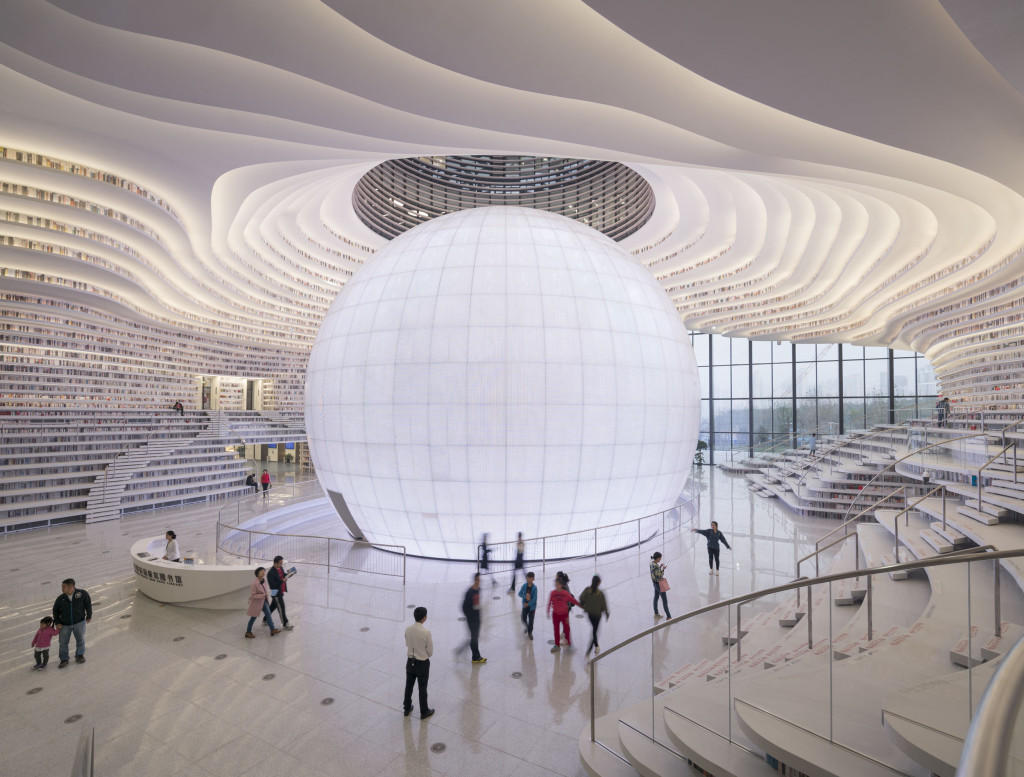 Beyond the eye-popping main space for books, the five-floor building also houses many media spaces. The first and second floors feature reading rooms, while lounge areas and meeting rooms, and offices can be found on the upper levels. The library also boasts two rooftop patios. 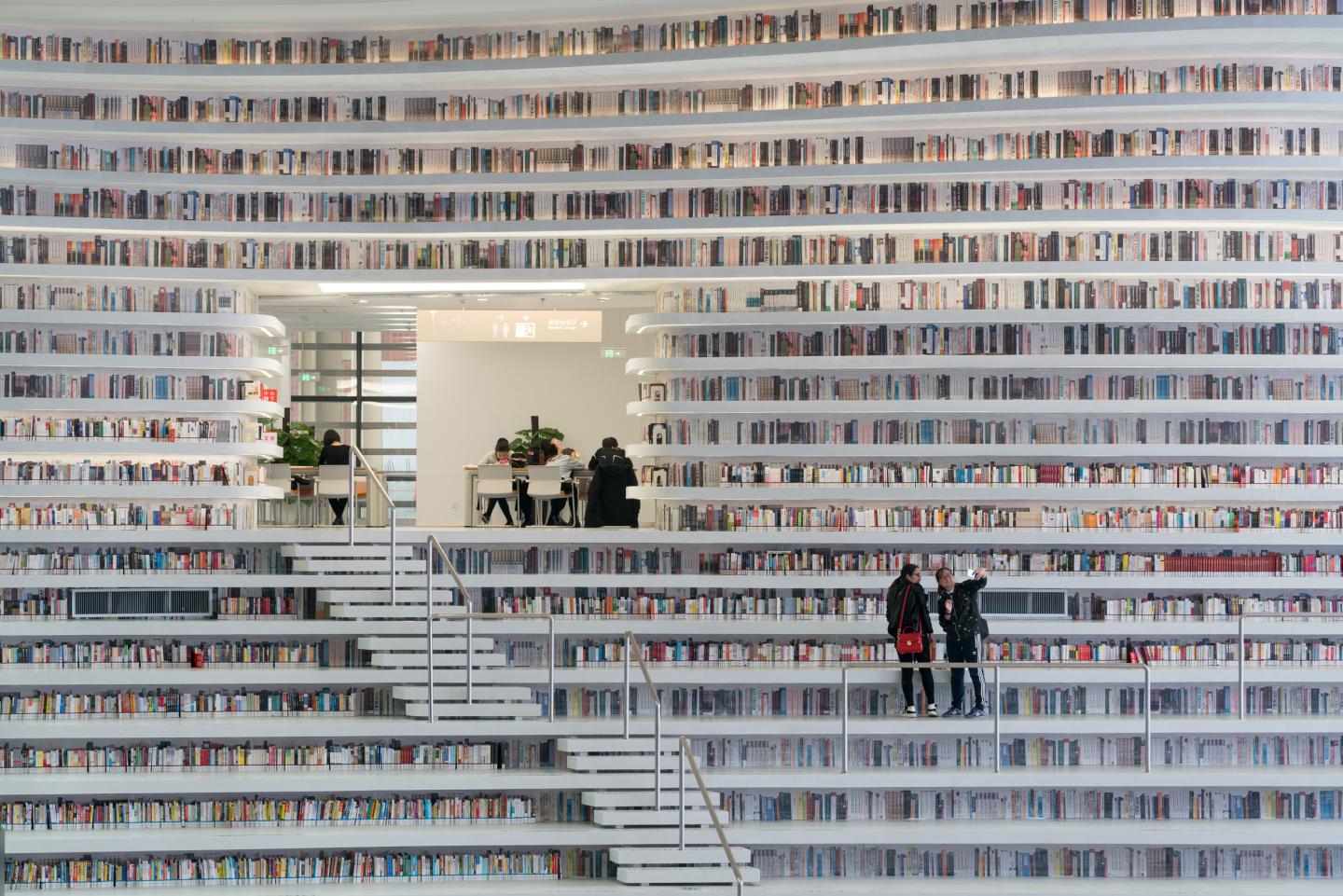 The Eye of Binhai is an ambitious investment in an age where more and more readers are choosing cheaper and more convenient ebooks and readers, like tablets and the Kindle, over conventional books. According to report from The Guardian, ebook sales went from $20 million in 2006, the year before Kindle, to around $1 billion today. Most public libraries offer ebook options, but patrons don't need to visit the physical location for that. That has made the question of how to get people inside libraries again a pivotal one for librarians and administrators around the world. 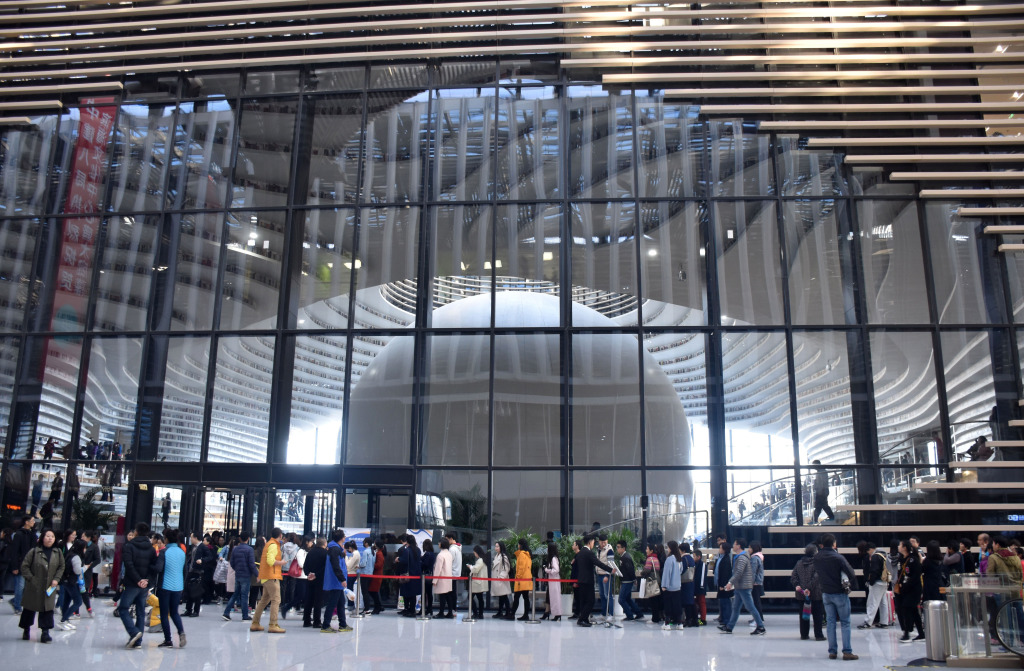 If the popularity of the Tianjin Binhai Library is any indication, a breathtaking cascade of bookshelves is certainly a good place start. 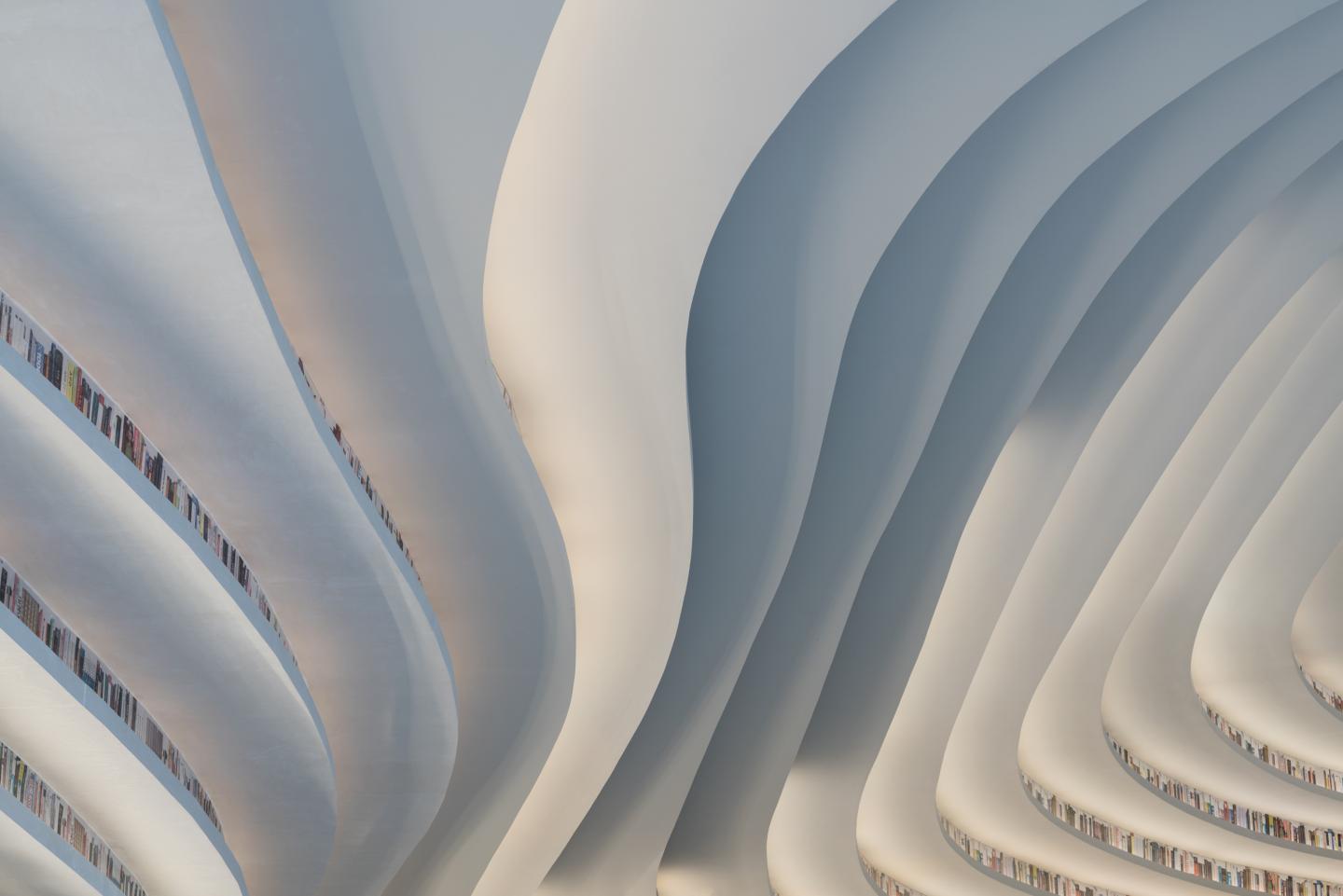 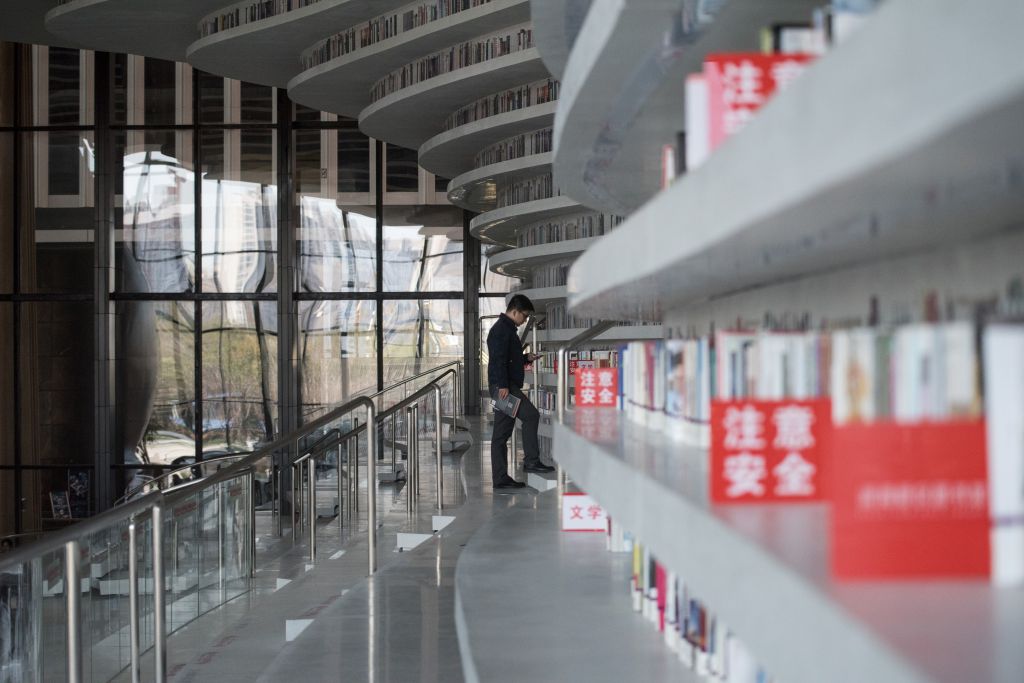