In Loving Memory - Standing Up For What Is Right

Terror in Charlottesvile Virginia from Community of Lights on Vimeo

Heather Heyer was killed Saturday as she pushed back against hatred. She left behind a dog — and an approach to the world that those who love her say needs nurturing now that she’s gone. The chocolate chihuahua’s name is Violet, “because purple is Heather’s favorite color,” her mother, Susan Bro, said Sunday. She paused. “It was . . . was her favorite color,” she said through the tears. 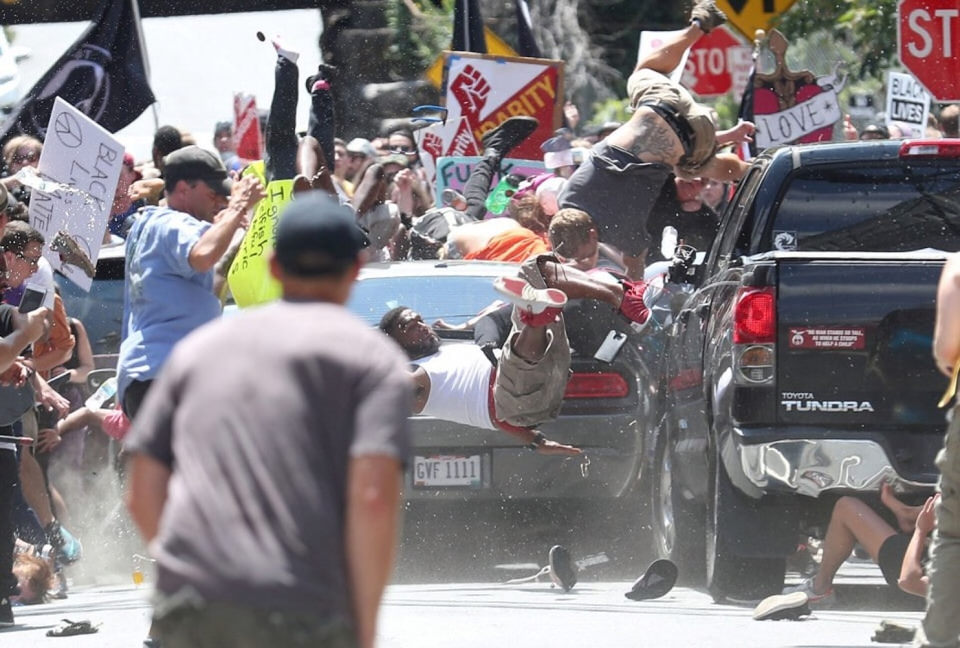 Her daughter was among those gathered to oppose the neo-Nazis, Ku Klux Klan members and other white nationalists making a show of force in Charlottesville.

Heyer, 32, was killed and 19 others were injured after, police say, an Ohio man barreled toward them in his Dodge Challenger.

“I’m not really surprised my child died this way, because she would stand up for what she believed in,” Bro said. Sitting at the kitchen table in her home north of Charlottesville, with Violet wandering by her feet, Bro said her daughter’s last day reflected the way she treated others, including those with whom she disagreed. Over the years, Heyer would ask people why they came to their beliefs. Heyer’s friends told her mother that she was at it again during the demonstrations Saturday, going up to people with opposing views and asking them “Why do you believe this?” or “Why do you think this way?” “Heather has always stood for fairness and equal treatment of everybody,” said Bro, 60. The anguished mother is trying to do the same with the man who authorities say caused Heyer’s death. 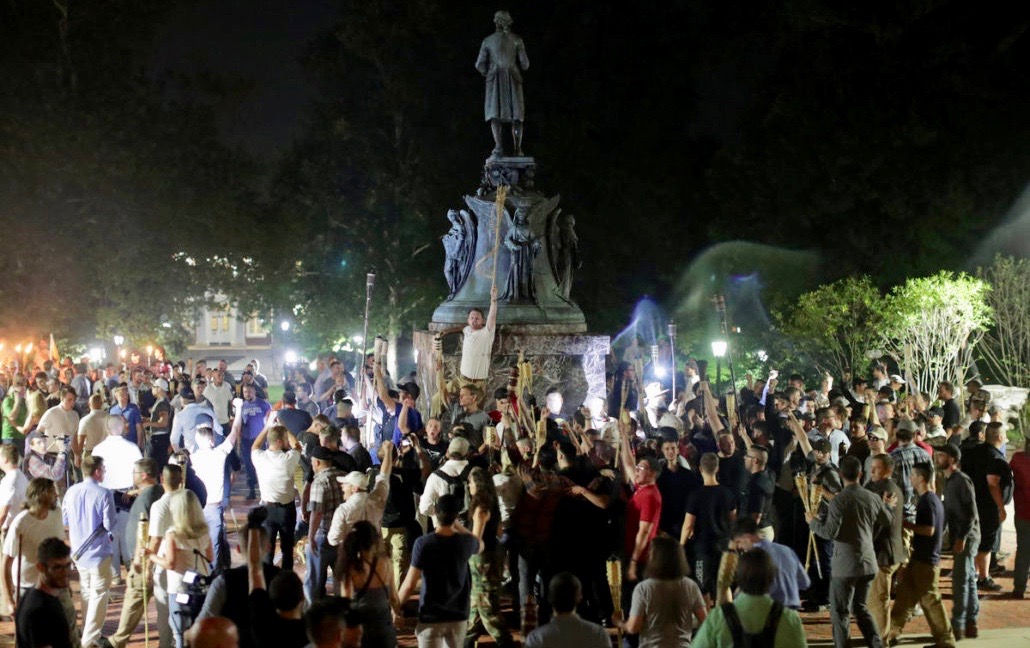 Charlottesville suspect espoused Nazi views in high school, teacher says. James Alex Fields Jr., 20, was charged with second-degree murder after police said the Challenger he was driving “at a high rate of speed” rear-ended another car and pushed vehicles into a crowd of pedestrians. He then backed up and fled, they said. Fields was also charged with three counts of malicious wounding and one count of hit-and-run. State of emergency declared after white nationalists gathering in Charlottesville. 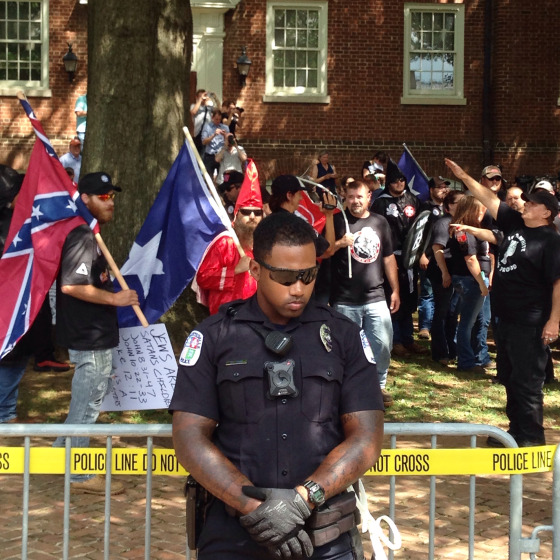 White nationalists were met by counterprotesters in Charlottesville on Aug. 12, leading Gov. Terry McAuliffe to declare a state emergency. A car plowed into crowds, killing one person and injuring 19 others. 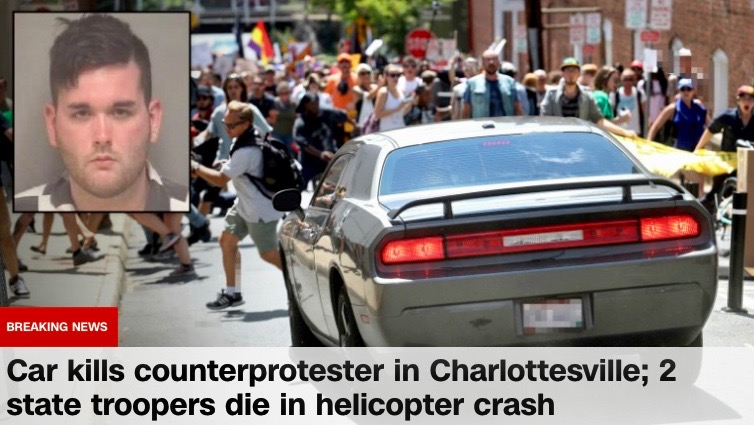 A former teacher said Fields sympathized with Nazi views. Virginia’s secretary of public safety called him a terrorist. Every time Bro closed her eyes Saturday night, the tears would come. When she couldn’t sleep, she tried busying herself doing laundry. “Who does laundry when their child’s died? That’s all I could do,” she said. Despite her pain, Bro said she doesn’t want people to hate Fields. It isn’t what her daughter would have wanted, she said. “Our daughter did not live a life of hate, and hating this young man is not going to solve anything. . . . It’s not that I think he should go unpunished for his crime. But hate only engenders more hate, and there’s no purpose in hate,” Bro said. “Heather’s life was about — passionately about — fairness and equality and caring, and that’s what we want people to take away from this.” 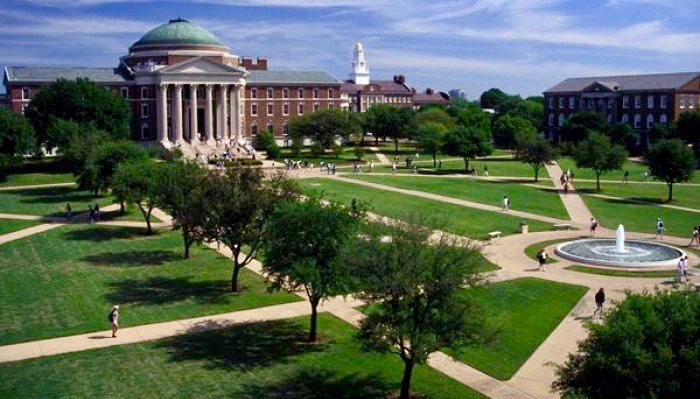 Of the 19 people taken to the University of Virginia Medical Center in connection with the crash, nine had been discharged as of Sunday afternoon, a spokeswoman said. Others who were injured Saturday were also treated at the hospital, although no precise number is available, she said. A childhood friend said she was inspired by Heyer’s mix of backbone and heart. Even as a quiet young girl, Heyer stood up for people who were picked on while riding the schools bus, Felicia Correa said.

On Saturday, she was killed standing up for her country, Correa said. “People will remember her name and remember what she died for,” she said. Correa said she recently was swamped with medical bills after complications related to her multiple sclerosis, so she went to a Charlottesville law firm. When Heyer, who was working as a paralegal there, walked out to meet her, she was ecstatic to see the friend she had known growing up in Greene County, Va. Heyer jumped in and guided Correa, who was uninsured and is a mother of six, through the daunting financial process. She was a “young white woman who died standing up not just for people of color in general, but also the people of color that I love, that I worry about,” said Correa, who is biracial, black and Hispanic. “She died for a reason. I don’t see any difference in her or a soldier who died in war. She, in a sense, died for her country. She was there standing up for what was right,” Correa said. “I just want to make sure that it wasn’t in vain.” 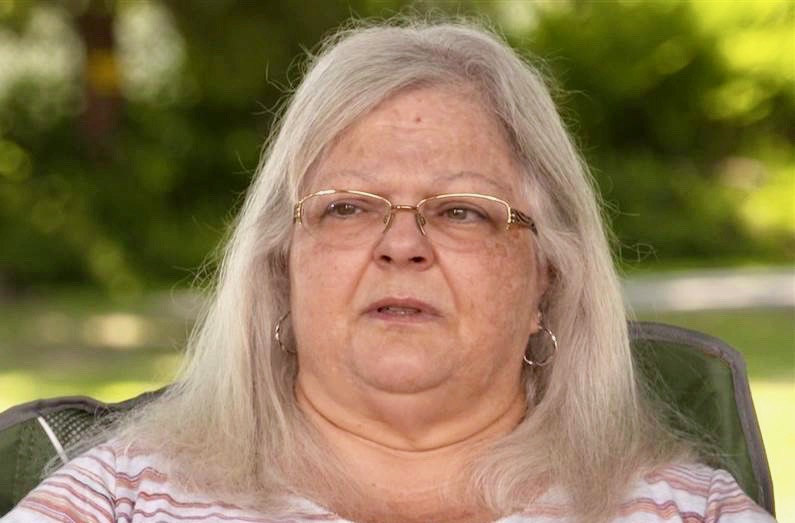 Justin Marks, a longtime friend of Heyer, was sobbing and screaming on the line. Bro didn’t understand what was happening. Then, finally, Marks said he understood that the hospital was trying to reach next of kin and needed a number. Bro said she remembered telling her son, “Your sister is either dead or she’s unconscious because . . . ” She paused to cry while recounting her ride to the hospital Saturday. “. . . she would know my number.” Bro was in such shock that she couldn’t remember Heather’s middle name when a hospital staffer first asked her. It’s Danielle. Marks said he and Heyer had previously agreed not to attend the protests, because they thought it would be too dangerous. Everyone was on edge about it, he said. But the night before, Heyer texted Marks, 30, saying that she felt compelled to go, and who was Marks to say she shouldn’t? “She talked about these things constantly. It weighed on her,” he said. 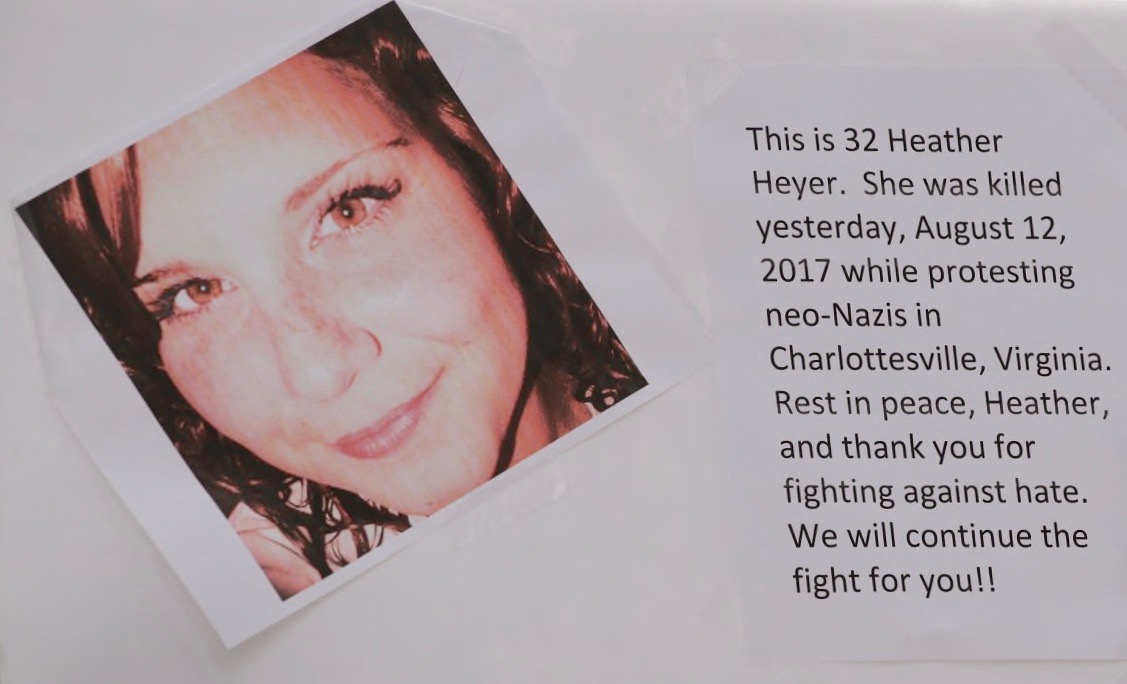 Heyer was a challenge to raise sometimes because she was so strong-minded, but that didn’t upset Bro. She always encouraged her to be independent and think for herself. “If she believed something was right, you could not dissuade her,” Bro said. The two would discuss their shared concerns about racism and hatred. They supported fighting for equal treatment, whether through Black Lives Matter advocacy or by tipping waitresses fairly. Her daughter loved mac and cheese, cigarettes, scented candles, and products for her curly hair. Bro has adopted Violet, who she calls her “grandpup.” “I’m very proud of my baby, but I do miss her,” Bro said. “We would’ve talked about the rally together by now.”

In the wake of the White Suppremacists Terror in Charlottesville, VA we are including in this story this  film which examines the echoes of 20th century fascism that are reverberating today.  This anti-fascist film produced by US Military in the wake of WWII in 1947, deconstructs the politically motivated social engineering of Germany by the Nazi regime.  Its argument is just as timely and relevant today. 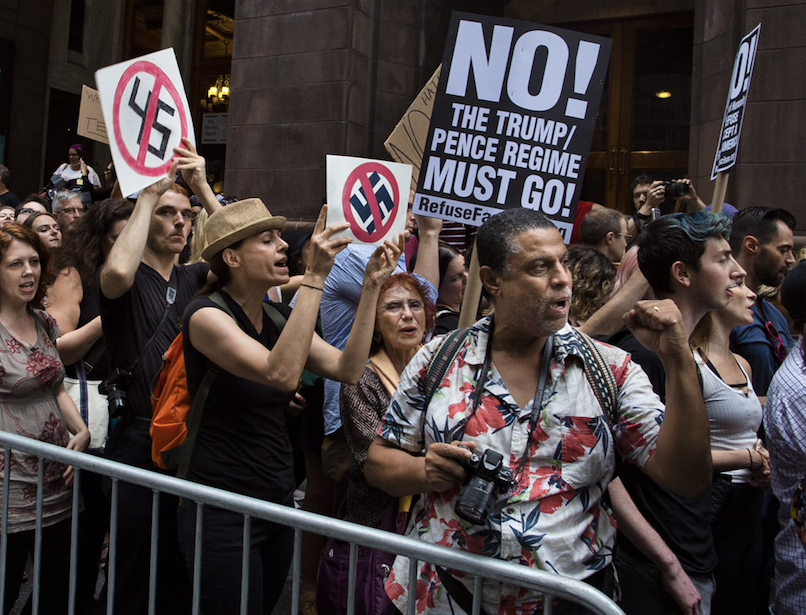 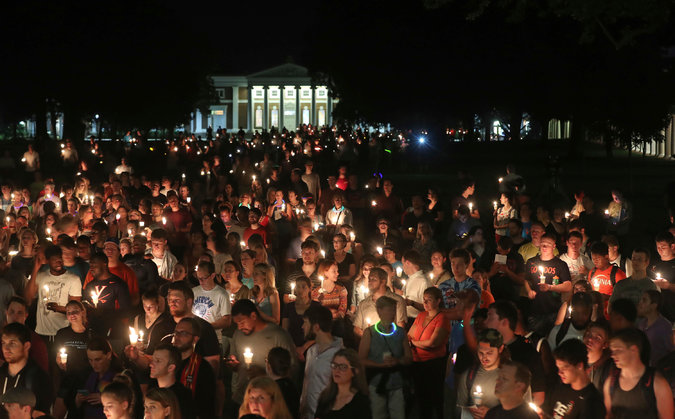 for a Vigil and Peaceful March Against Hate and Violence