The Monument is one of London’s most famous landmarks, even giving its name to a local Tube stop. But this tribute to London’s greatest fire also has a secret second use – as a giant piece of scientific equipment. “I’ll just open the hatch...” says Richard Smith, who is stooped over in the ticket office at the Monument. He’s examining the oak-panelled floor as though it’s hiding a secret chamber, as in an Indiana Jones movie. Above him, a desk is piled high with leaflets “This is to certify that "such individual" has climbed the 311 steps of the Monument”. The thing is, there are actually 345. 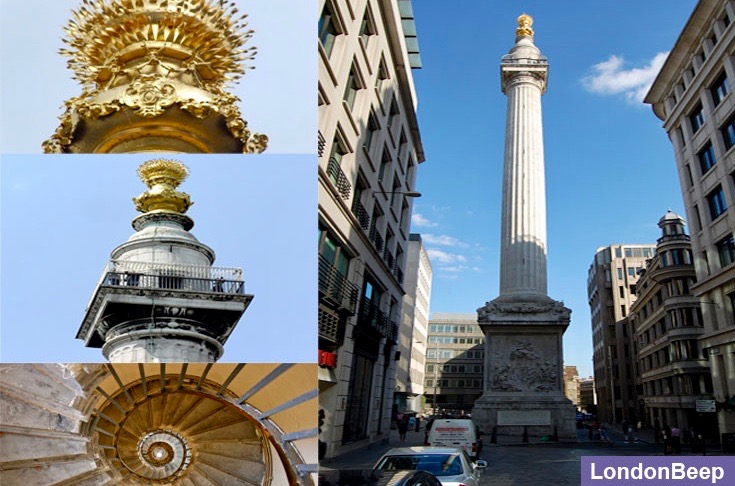 The Monument to the Great Fire of London consists of a towering, 202-foot (61-metre) stone column, decorated with dragons and topped with a flaming golden orb. On the inside, a striking spiral staircase stretches all the way to the top, twisting up like the peel of an apple carved in a single, continuous ribbon. 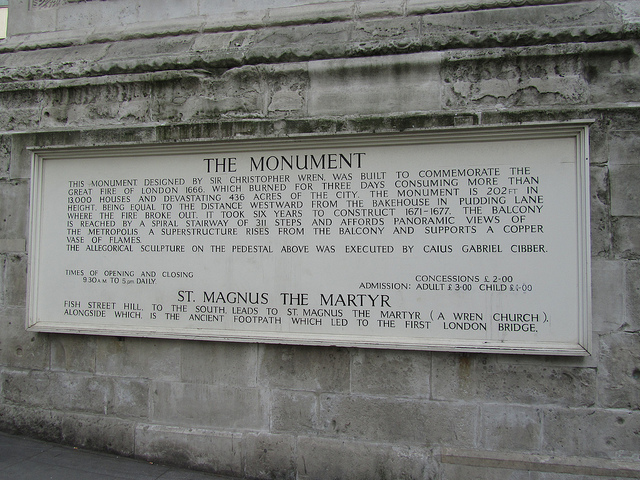 For years, a cracked plaque tacked to the base explained that it had been designed by Sir Christopher Wren. Again, this isn’t entirely truthful.

It makes a lot of sense that the capital’s beloved Monument would be borne of Britain’s most celebrated architect. After all, Wren was widely involved in rebuilding London after the Great Fire destroyed pretty much every inch of ground within the city walls – including 13,200 houses and numerous extraordinary public buildings, from riverside castles to Whittington’s Longhouse, one of the largest public toilets in Europe. He even created the nearby St Paul’s Cathedral. In fact, the Monument was designed by his close friend: scientist Robert Hooke. 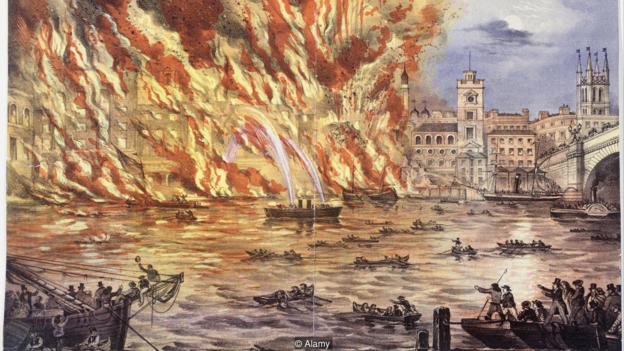 The Great Fire of London paved the way for a new generation of public buildings. Robert Hooke was a man of many passions, who applied his enquiring mind to subjects as diverse as chemistry and map making, at the sober end of the scale, and folk beliefs about toads and his own bowel movements at the other.

In his day, he had a reputation as lofty as the pillar itself, variously described as “England’s Leonardo” and “certainly the greatest mechanic this day in the world”.  Today his name has largely been forgotten, but his contributions have endured. Among other things, he coined the word “cell” to describe the basic unit of life (they reminded him of Monks’ rooms, or “cells”), devised Hooke’s law of elasticity – arguably not particularly exciting, but useful – and invented mechanisms still used in clocks and cameras to this day.

the Monument. It was supposed to be a grand acknowledgement of the fire, but at the time, “what Hooke really wanted was to build a very a long telescope,” says Maria Zack, a mathematician at Nazarene University, California. In the end, he decided to combine both. My guide for the day is Richard Smith, a Londoner with a Cockney accent and infectious enthusiasm for this enigmatic pillar. He lifts up the hatch – the only clue to which is a couple of wrought-iron hinges – and disappears underground. It leads to yet more stairs. Eventually we find ourselves in a room with a domed roof. The ancient brick walls are bare and crumbling and it smells damp, like clothes that have been left in the washing machine for too long. This part is usually off-limits to visitors, though I can’t help thinking they probably don’t mind all that much. Today the room is empty, except for a wireless router and some sensors. “When they put the building next door up a couple of years ago, they had to make sure they didn’t accidentally knock this one down,” says Smith. But a few hundred years ago, it was a state-of-the-art physics lab. 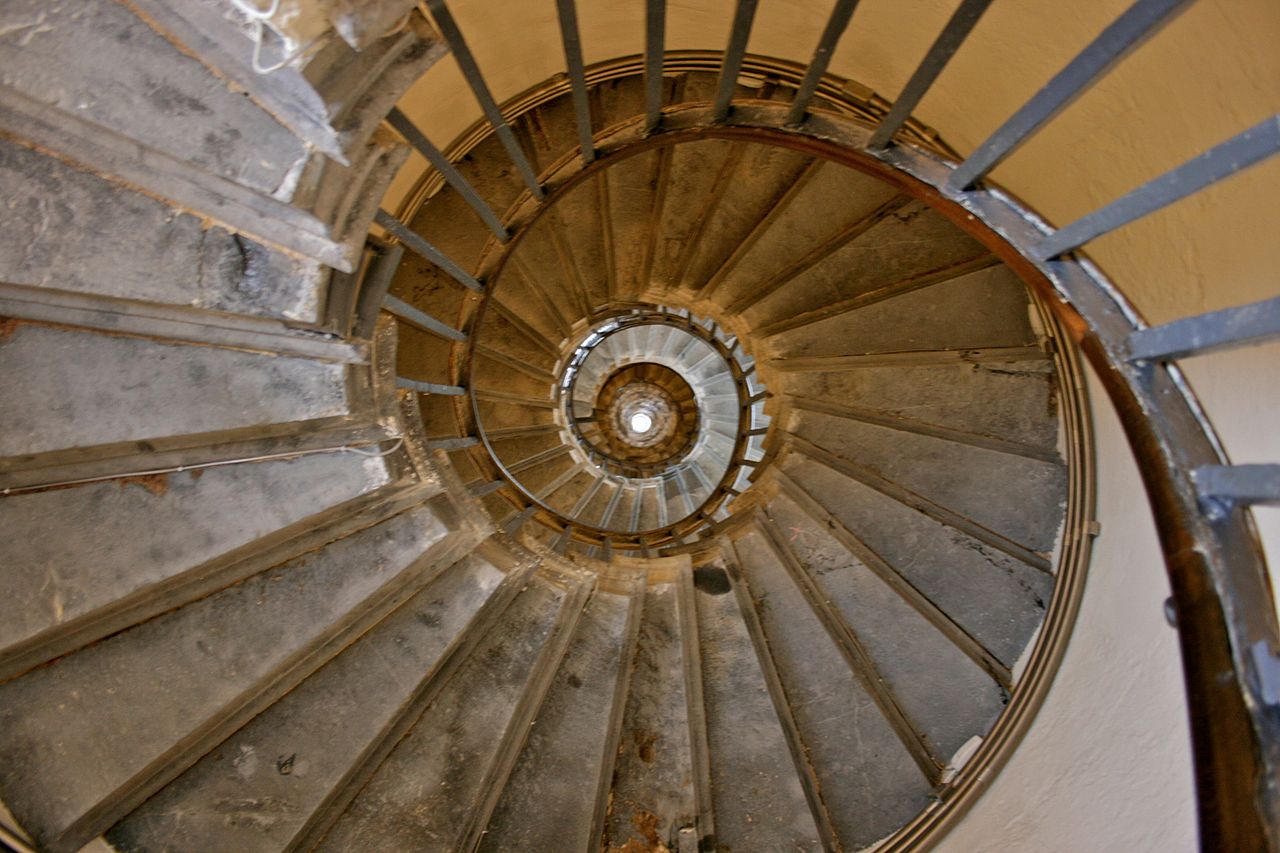 To see why, Smith ushers me into the centre of the room. Looking up through a metal grate, there’s a clear view all the way through the spiral staircase, up to the highest point in the building. Right at the top, hidden inside a decorative golden orb, is yet another trap door – this time made of heavy iron. When it’s opened, you can look all the way up, from the basement lab into the night sky. In fact, the entire building is a giant telescope. 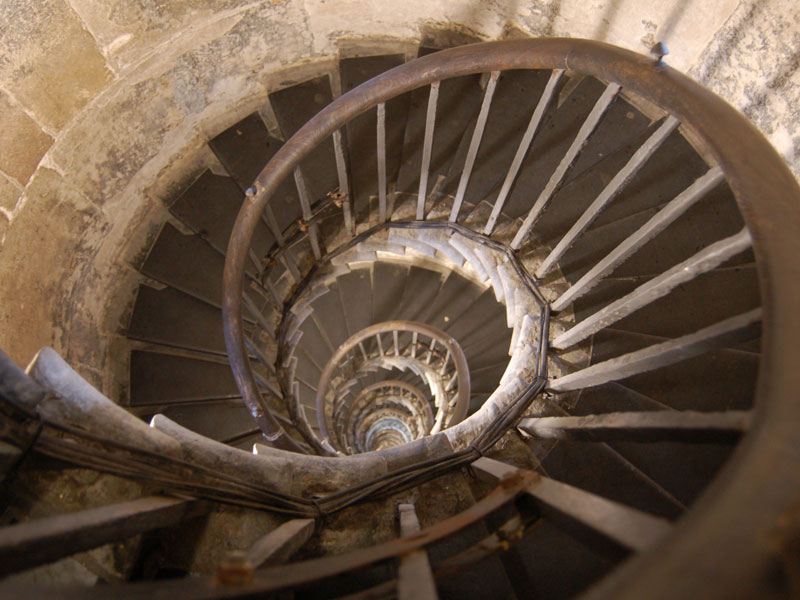 This isn’t as bonkers as it sounds. Back in the 17th Century, scientists were still arguing about whether the Sun revolved around the Earth or the other way around. Like all rational people today, Hooke was thoroughly convinced by the latter. But no one could prove it. In theory, it should have been easy, thanks to “astronomical parallax”, an apparent shift in the position of one object, against a backdrop of another. To experience parallax, all you need to do is hold out a finger and squint at it though one eye, then close that eye and open the other. Though all that’s changed is your viewing perspective, your finger will appear to move. “It’s a concept we all understand intuitively,” says Zack.  Scaling this up, if the Earth changes its position relative to the stars, while circling the Sun – then they should appear to jump from one place to another over the course of a year.  The catch is just how tiny these movements are. Take Gamma Draconis, a giant orange-coloured star around 900 trillion miles (1.4 quadrillion km) away. Instead of using measuring the movement of objects in the sky, from planets to satellites, in metres or inches, astronomers divide up the heavens like the face of an imaginary clock. Every six months, the star moves north or south in the sky at a scale equivalent to the hands moving 22 ten-thousandths of a second. To magnify parallax enough to see it, you need a very large telescope indeed.

Hooke’s first idea was to embed one in his lodgings at Gresham College, where he was professor of geometry. The 36-foot (11m) telescope was so large, holes had to be cut through the structure of the building. In the end, it passed through two floors and out through the roof. Next, Hooke chose his star. Gamma Draconis was the ideal candidate, because it’s relatively bright and passes directly overhead. Now all he had to do was wait for it to pass overhead – he was ready to change our perspective on the Universe forever. Except it didn’t work. The measurements depended on lining the lenses up exactly, but the structure just wasn’t stable enough. They were fixed in place using a wooden structure – a material known to expand in heat and flex in the wind. 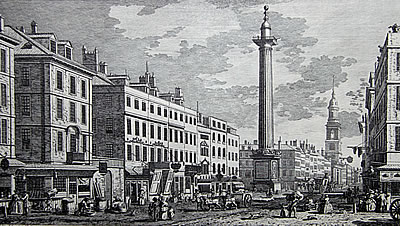 Instead, he turned to the Monument. This time, he was determined the structure would be sturdy. His plans called for 28,196 cubic feet (798 cubic metres) of the finest Portland stone, which is roughly the weight of 14 blue whales. “This wasn’t just some flimsy narrow tube like the other telescope,” says Zack. 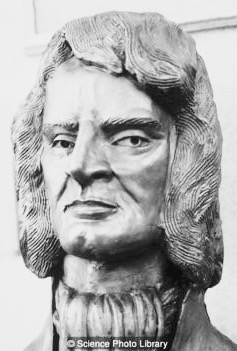 There is no surviving portrait of Robert Hooke, since it is thought to have been burned by his rival, Sir Isaac Newton

The construction took the best part of six years, mostly because they kept running out. Eventually the king issued a proclamation, forbidding anyone from transporting rocks from the Isle of Portland without first consulting Wren, who was officially in charge of the project. There were a few other hiccups along the way, such as the suggestion that it should be topped by a statue of the king, Charles II. This would have ruled out using it as a telescope, of course. “Hooke was like ‘Oh, I know what you mean, but wouldn’t it be better to have this nice golden orb on the top? Then you can use it to shoot fireworks.’” says Zack, while pointing out that the need for a firework launching pad would hardly have been at the forefront of peoples’ minds. Luckily, the King refused to have a statue of himself on top anyway, since he thought this might make it look like he was responsible for the fire. Hooke got his way and it was completed in 1677. 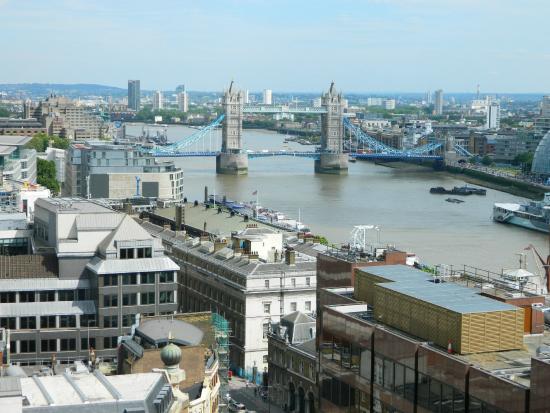 Originally, lenses would have slotted in at either end and an observer, standing in the lab, could take measurements of the stars using a special eyepiece. This time, surely Hooke would get his way. Then disaster struck. “He was trying to keep the two lenses aligned, 200ft apart, with only limited ways to anchor them to the telescope,” says Zack. Worse still, the Monument is next to Fish Street Hill, which was the main route to London Bridge at the time. This was one of the busiest roads in London, mere metres from his highly sensitive scientific experiment. In the end, vibrations from the traffic ruined everything. Parallax wasn’t discovered until 1838, when German astronomer Friedrich Bassel observed the movement of the star 61 Cygni. 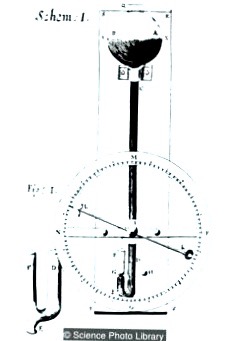 But that isn’t quite the end of the Monument’s story. In the 17th Century, high buildings were rare. At the time, the tallest building in the world was Strasbourg Cathedral, which was only just over twice as high. Previously, Hooke had been forced to conduct experiments requiring height from the top of London’s Westminster Abbey or St Paul’s Cathedral. Now he had his very own laboratory for “tryalls” on the effects of height, particularly on the pressure of the surrounding air. In 1678 he penned a typically muddled diary entry:

Thursday, May 16th – wrote to Grace angry letter about her mothers Shirds. ag. "at Fish street piller tryd experiment it descended at the top about 1/3rd of an inch. DH. view at Bedlam with Govenors 0. Sir Joseph Watt here. Opend Iron chest hurt finger. sat not, discoursd about Experiment at Fish Street Column. with Mr. Henshaw, &c., at Jonathans."

Hooke was using a barometer to measure how pressure changed as he walked up the pillar. He had planned the Monument very carefully – each step is exactly six inches tall – so he could track the changes in pressure with precision. Between the bottom and top of the stairs, the mercury level dropped by about a third of an inch, confirming that air pressure decreases with altitude. Finally, a successful experiment at the Monument. Who cares that this had already been discovered three decades earlier? Even if it was by simply walking up a mountain.