Sex is often complicated. Couples can become muddled in fraught dynamics, power struggles and conflicts between short-term desire and long-term vision. Of course, we are talking about butterfly sex here. Researchers at the University of Cincinnati have pulled the curtain back on the mating habits of the cabbage white butterfly, also known as Pieris rapae. Their previously unknown theatrics are overflowing with complexity that would put the most melodramatic human couples to shame. 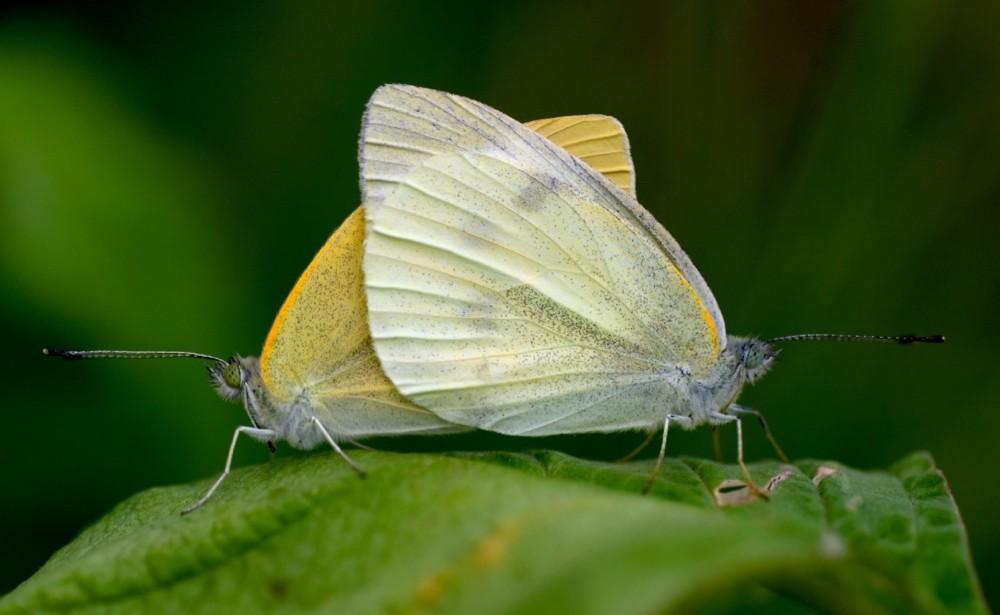 Take sperm, for example. Male butterfly ejaculate is delivered in a package that also includes potent nutrients for the females. That boost of nutrition benefits females, but getting the goods is not so easy. The packaging is a hard shell that takes three days to digest. And during those three days, females are completely unable to mate. That much was already known about cabbage white sex. But further research, newly published in the Proceedings of the National Academy of Sciences, found that the outer shell, the sperm and the nutrients are completely distinct from one another. The male stores each component separately and bestows them upon the female reproductive tract one at a time during mating. The total parcel amounts to a whopping 13 percent of the tiny butterfly's body weight, and only 2 percent of that weight is sperm. 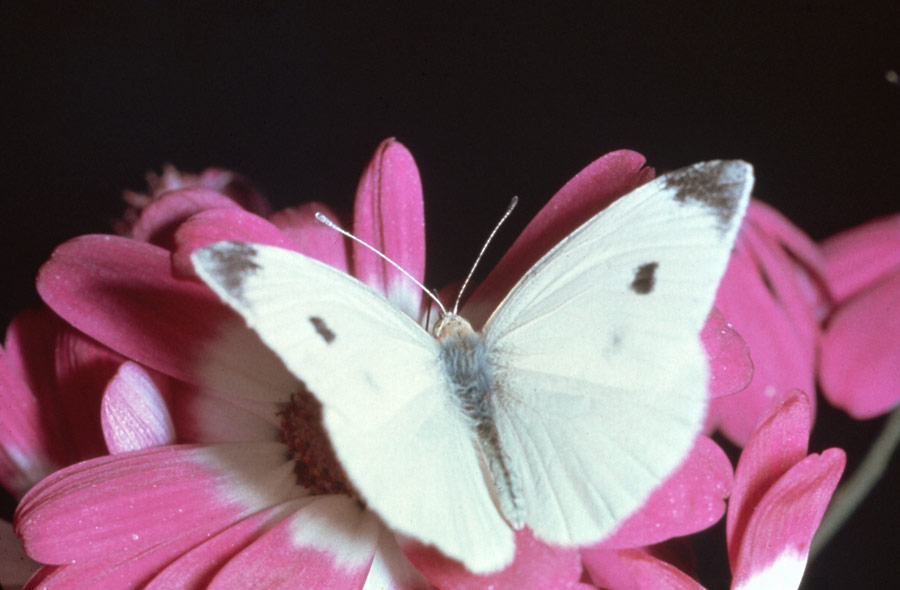 The process gives the males temporary control over females, University of Cincinnati biologist Nathan Morehouse, a lead researcher on the study, said in a statement. The female can’t mate again for three days because the package is too big to allow anything else in her reproductive tract until it is fully digested. The delay gives the male an evolutionary advantage: It ensures that his sperm, and no other, will fertilize the female’s eggs. 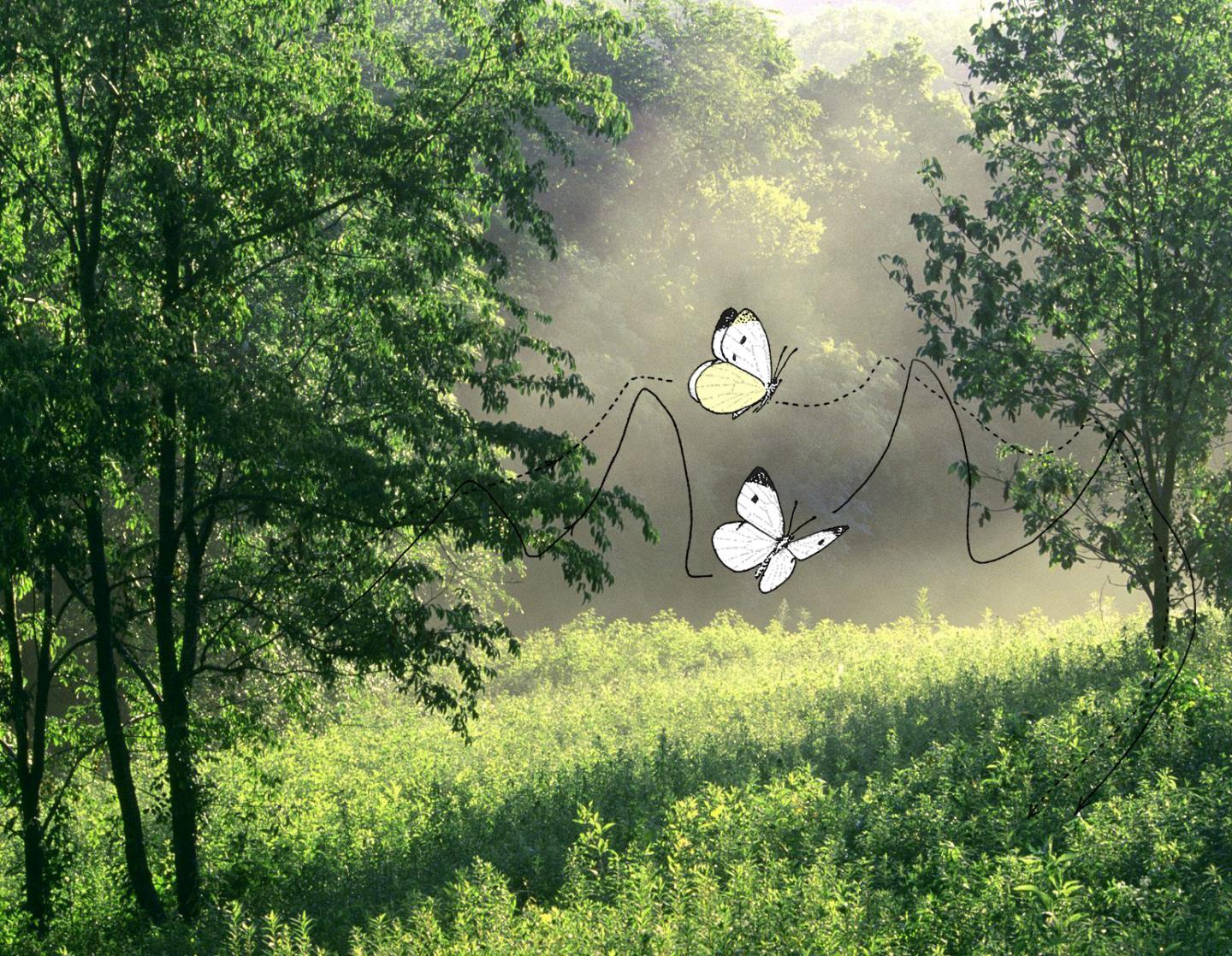 This illustration of two cabbage white butterflies shows their mating dance. The male performs sweeps under the female to show off his bright violet wing colors, visible only to the butterflies. The brighter the violet on the wings, the more nutritious his reproductive package. 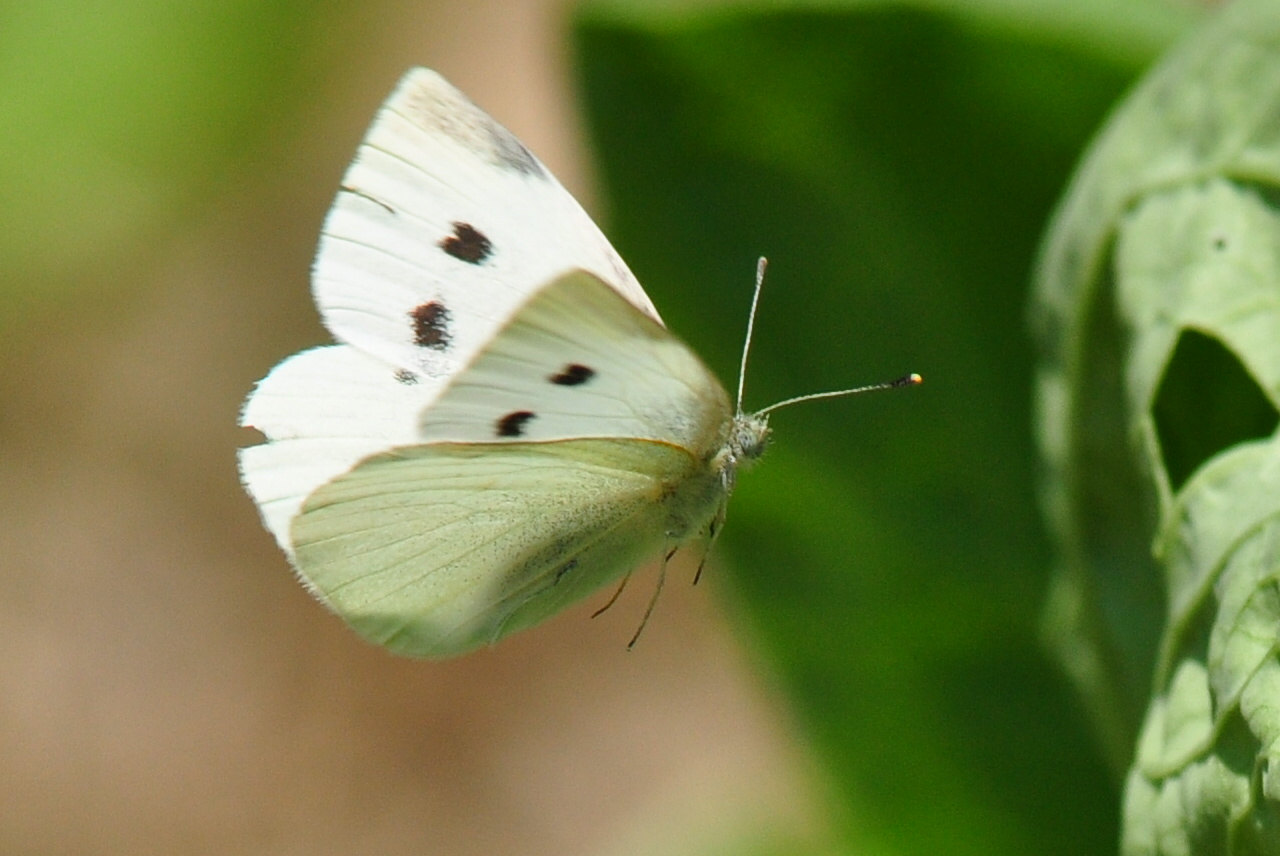 But the females are not completely beholden to their mates. The nutrients in the ejaculate package help them make their eggs. The researchers estimate that mating just two or three times provides enough protein for up to 40 percent of her eggs. In other words, she is getting what she needs and moving on.

Also, the female is "actually very well equipped to quickly digest the nuptial gift from the male," said Camille Meslin-Auclair, a biologist at the University of Pittsburgh and lead author on the study. Her main tool is a toothlike structure inside the reproductive tract that can eat right through that hard outer shell in just a few hours. Without that bit of ingenuity, "it would likely take a week or more," said Morehouse. This structure, which the researchers "affectionately call vagina dentata," is also known as a signum. 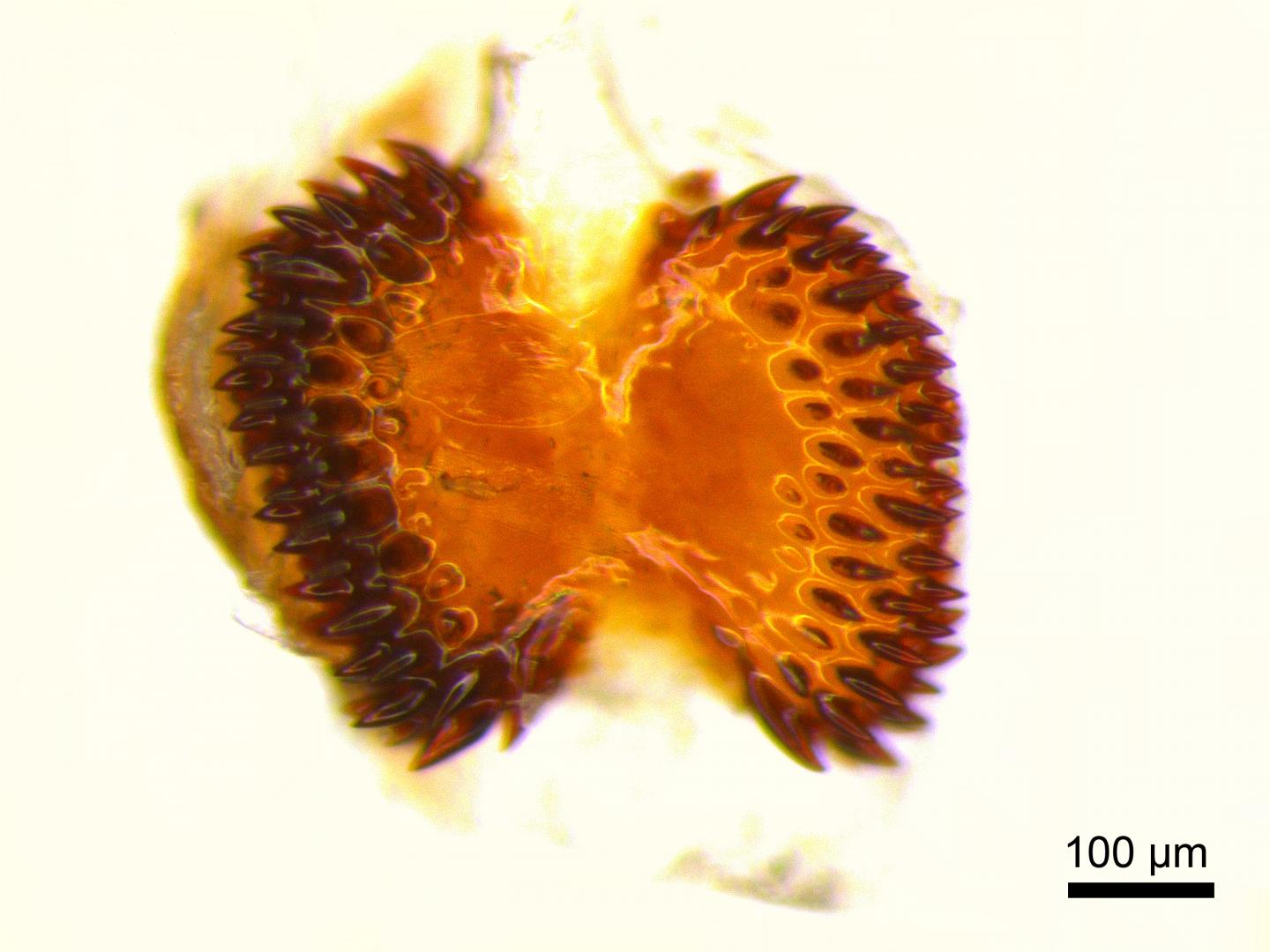 The signum, which researchers also call vagina dentata, part of the cabbage white butterfly female reproductive tract. This hinged, chewing jaw helps the female break down the hard shell encasing the male's sperm and other nutrients.

But like with human mating, things don't always work out. Sometimes male and female reproductive materials don't meld, resulting in low egg fertilization. Further research into how the females overcome this issue at the molecular level could inform efforts to treat similar conflicts in human reproduction, between male sperm and female enzymes. 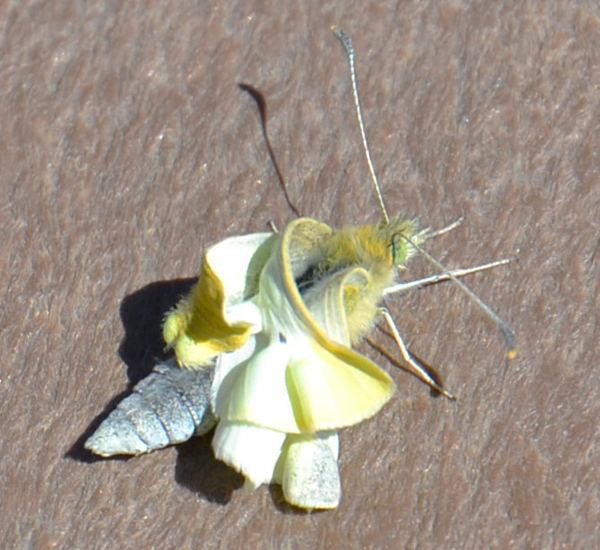 The evolutionary forces that have shaped interactions between males and females across all animals are not well understood, explains study co-author Nathan Clark, who teaches biology at the University of Pittsburgh. "Knowing how one set of species has worked out their cooperative relationship as well as their conflicts helps to explain why certain human proteins may be malfuctioning," says Clark. Other animals do possess similar reproductive structures. Spermatophores—the shell-nutrient-sperm combination—are found in many insects. Mice, snakes and chimpanzees also have plugs and other comparable features. But this research may be the most detailed examination of insect reproductive structures to date. 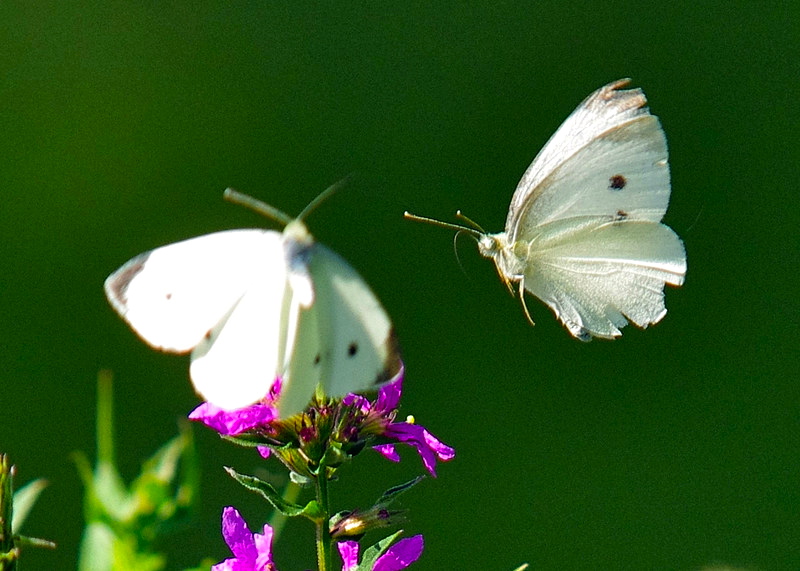 The researchers are now studying how the female chemically digests the spermatophore using proteins she produces in her reproductive tract. This deeper examination could reveal potentially incompatible males and females, says Clark, and whether the female proteins are shaped specifically around certain male proteins or if they are less particular. "There is magic all around us," said Morehouse, "and the lovely thing about science is that sometimes clues that might actually help with health issues like human infertility can come from a butterly in your own backyard."