Inside two Kansas Underground Survival Shelters for the Super Rich

Inside the Kansas survival shelter that will save humanity from a devastating meteorite or a nuclear holocaust Caves will be 'the world's largest private underground survivor shelter. Kansas caverns are 100-ft to 150-ft below the surface supported by thick limestone pillars six times stronger than concrete with have blast doors built to withstand a one-megaton nuclear explosion. This article takes a look at two complexes in Kansas; Vivos and Atlas Missile Silos, both with the same goals and objectives of surviving a massive crisis. 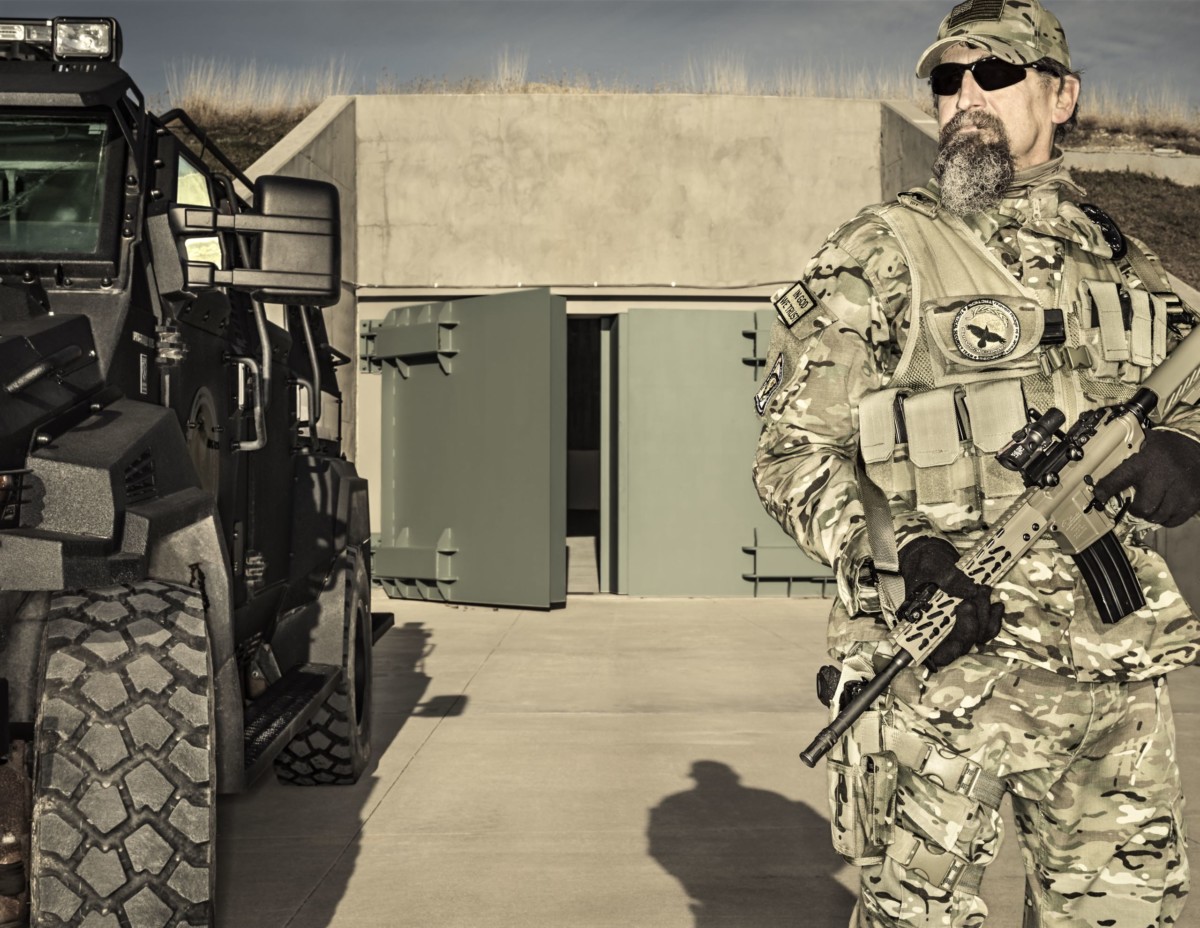 Arm Guard at the Entrance of the Underground Survival Complex

After most of the world's population is wiped off the map by a wayward meteorite or hail of nuclear missiles, the survival of the human race might just depend on a few thousand people huddled in recreational vehicles deep in the bowels of an eastern Kansas mine. That's the vision of a California man who is creating what he calls the world's largest private underground survivor shelter, using a complex of limestone caves dug more than 100 years ago beneath gently rolling hills overlooking the Missouri River. 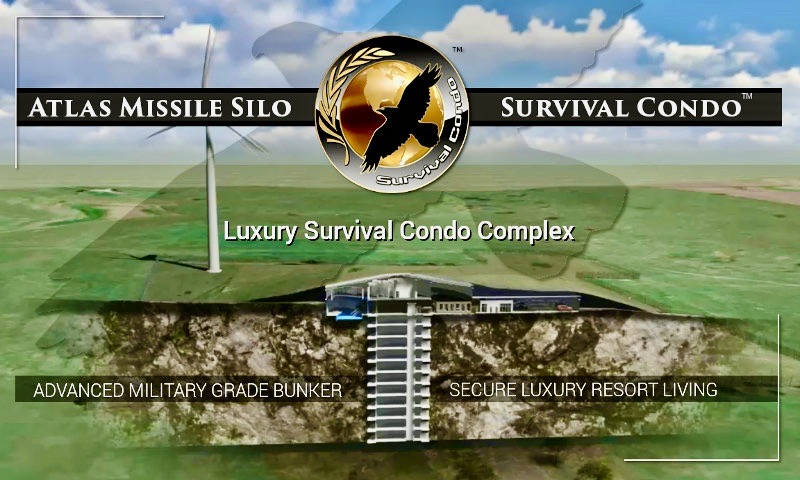 'I do believe I am on a mission and doing a spiritual thing,' said Robert Vicino, who has purchased a large portion of the former U.S. Army storage facility on the southeast edge of Atchison, about 50 miles northwest of Kansas City. 'We will certainly be part of the genesis.' Following a nuclear attack a wayward meteorite, thousands of people could surivive by huddling deep in the bowels of this eastern Kansas mine. 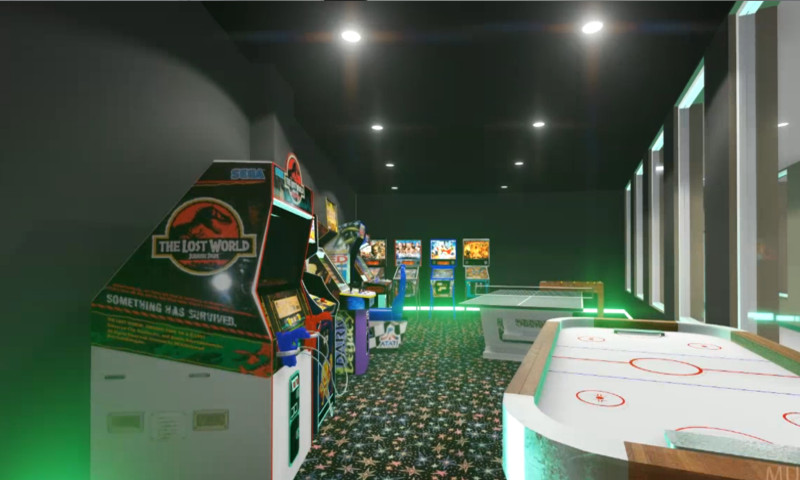 The shelter uses a complex of limestone caves dug more than 100 years ago beneath gently rolling hills overlooking the Missouri River. Before it comes time to ride out Armageddon or a deadly global pandemic, though, Vicino says the Vivos Survival Shelter and Resort will be a fun place for members to take vacations and learn assorted survival skills to prepare them for whatever world-changing catastrophe awaits. 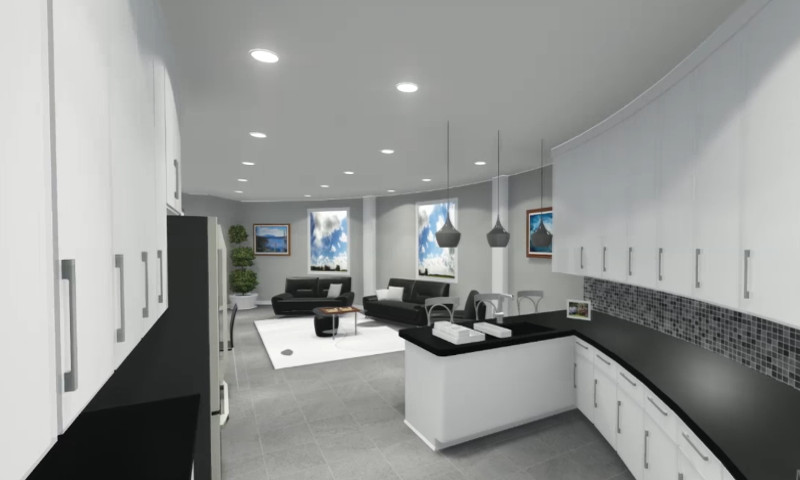 Jacque Pregont, president of the Atchison Chamber of Commerce, said some people think the shelter plan sounds creepy or that Vicino has 'lost his mind,' while others are excited because they will finally get a chance to tour the property. Atchison is known as the birthplace of Amelia Earhart and one of the most haunted towns in Kansas, Pregont said, so the survival shelter is likely to add to the town's tourism draw. 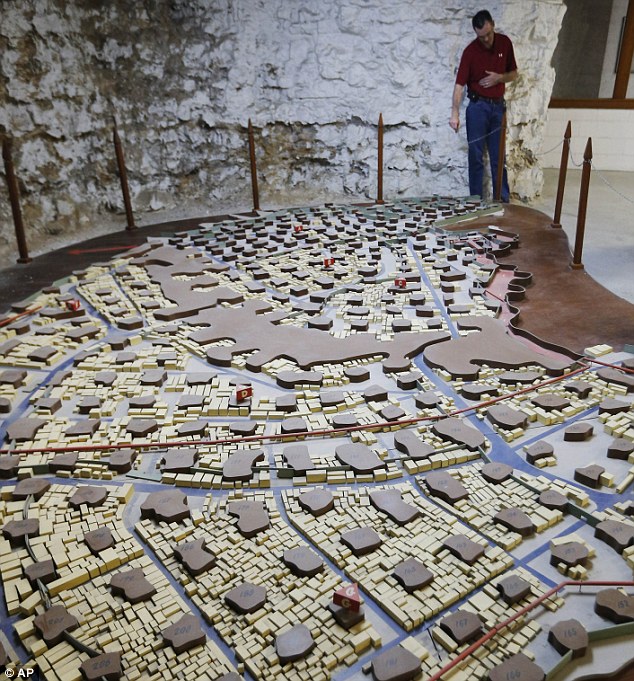 Mr Cullins (above) stands next to a scale model of the Vivos Shelter and Resort. The Army used the caverns for decades as a storage facility before putting them up for auction last yearBefore being used during an Armageddon or a deadly global pandemic, however, the Vivos Survival Shelter and Resort will be a fun place for people to take vacations and learn survival skills. 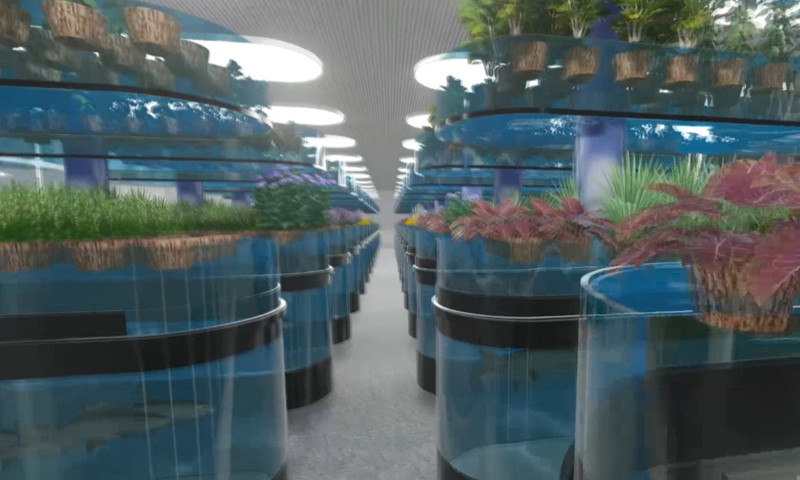 Hidro Fruits and Vegetables are Grown Inside the Survival Complex

Paul Seyfried, who belongs to a group that promotes preparing for manmade or natural disasters, said Americans have become complacent ever since the death of John F. Kennedy, the last president who urged people to build fallout shelters. 'There has been no war on our soil in over 100 years, so the horror of war is not stamped indelibly in Americans' minds,' said Seyfried, a member of The American Civil Defense Association's advisory board. 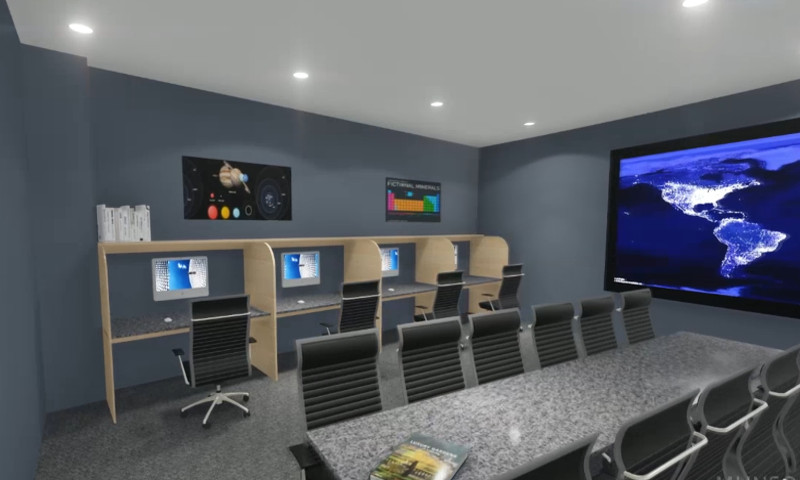 Ken Rose, a history professor at California State University-Chico, is an outspoken critic of underground shelters. Though he acknowledged that interest in underground shelters is growing, he called projects like the Kansas facility a 'colossal waste of time and money.' 'Some people are just obsessed by this idea,' Mr Rose said. '.. Without minimizing the terror threat here today, the threats were much greater at the height of the Cold War. At least then anxiety was based on a realistic scenario.' 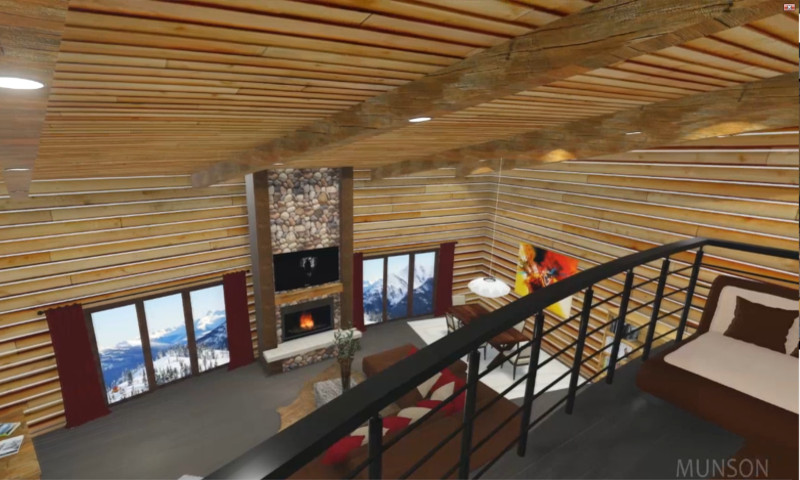 The Kansas caverns are 100 feet to 150 feet below the surface and have a constant natural temperature in the low 70s. Coby Cullins bought the complex and immediately started looking for ways to use it. One of his ideas was to lease the land to a company that builds survival bunkers. 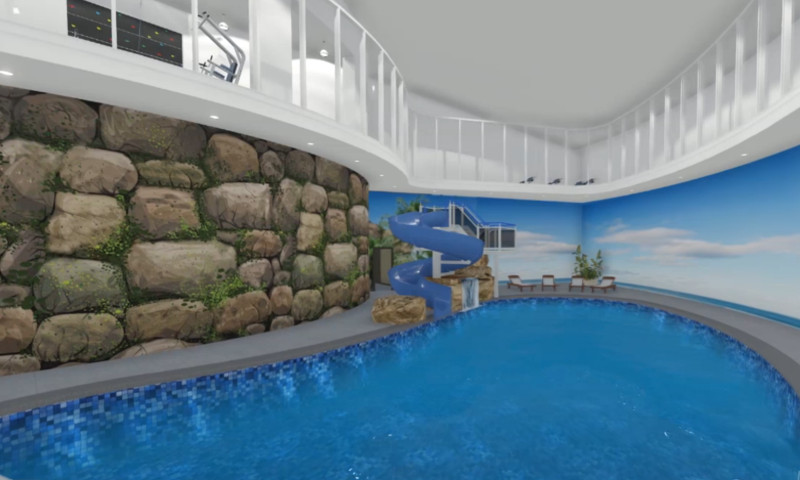 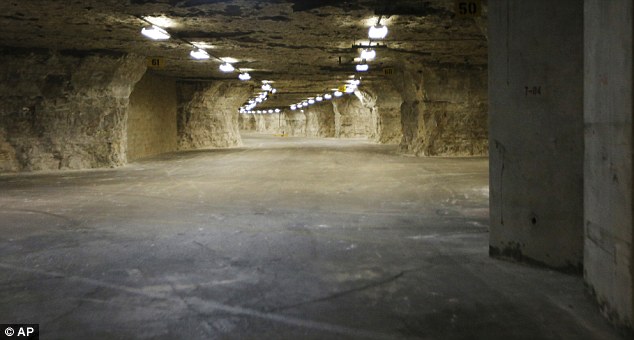 Mr Vicino, whose company is based in Del Mar, California, said he received an email from Cullins and flew to Kansas two days later to check out the property. Vicino agreed to purchase 75 per cent of the complex, rather than lease it, while Cullins retained the rest and is marketing it to local businesses. The complex consists of two fully lighted, temperature-controlled mines with concrete floors. The east cave, which Cullins owns, encompasses about 15 acres and contains offices, vaults, restrooms and other developed work spaces. The much larger west cave, which covers about 45 acres, is mostly undeveloped and will be converted into the Vivos facility. The shelter will have enough space for more than 1,000 RVs and up to about 5,000 people. Members will be charged $1,000 for every lineal foot of their RV to purchase their space, plus $1,500 per person for food. 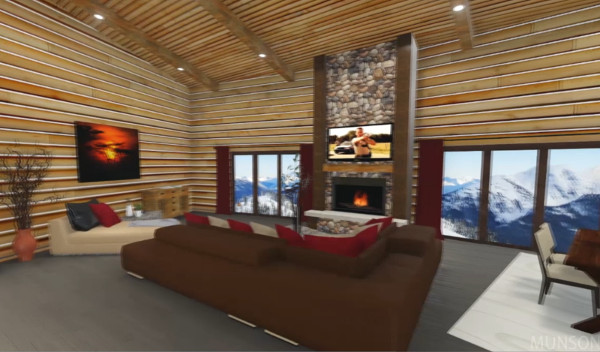 That means a person who plans to park a 30-foot vehicle in the shelter with four people inside will pay $30,000 for the space and $6,000 for food. Actual sales won't begin until a 'critical mass' of reservations are received and processed, Vicino said, which hasn't happened yet at the Kansas shelter. Vivos also owns a shelter in Indiana with room for 80 people to live comfortably for up to a year. There, members pay $50,000 per adult and $35,000 per child, so a family with two adults and two children would have to come up with $170,000 to be part of the post-apocalyptic generation.

Purchasers will required to pay for the full balance before taking possession of their shelter space, though the company has offered limited financing in the past with a sizable down payment. Vicino says he won't say specifically where the Indiana shelter or any of his smaller facilities are located because he fears there would be anarchy in the event of a world-changing catastrophe. And it doesn't matter who comes knocking at the 'moment of truth,' Vicino said, they're probably not getting in. 'I've heard people say, "I will just show up at the door,"' he said. 'Our response is, "great, where is the door?" At our secret shelters, you don't know where to go, and your cash will be worthless at that time.'