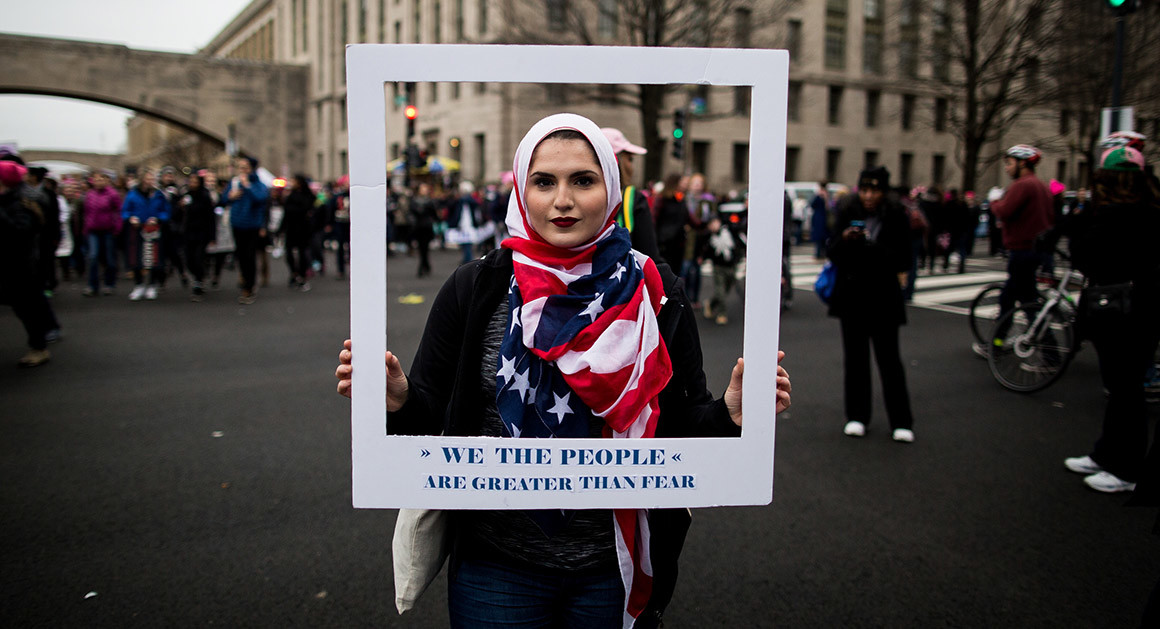 Moments after Mr Trump was sworn in as the 45th president on Friday January 20th, 2017, he delivered a thundering speech in which he promised to improve the lives of millions of Americans. A day later, on Saturday, January 21st, 2017 throngs of women, men and children streamed into the same area where he made that pledge, in order to take a stand for gender and racial equality. 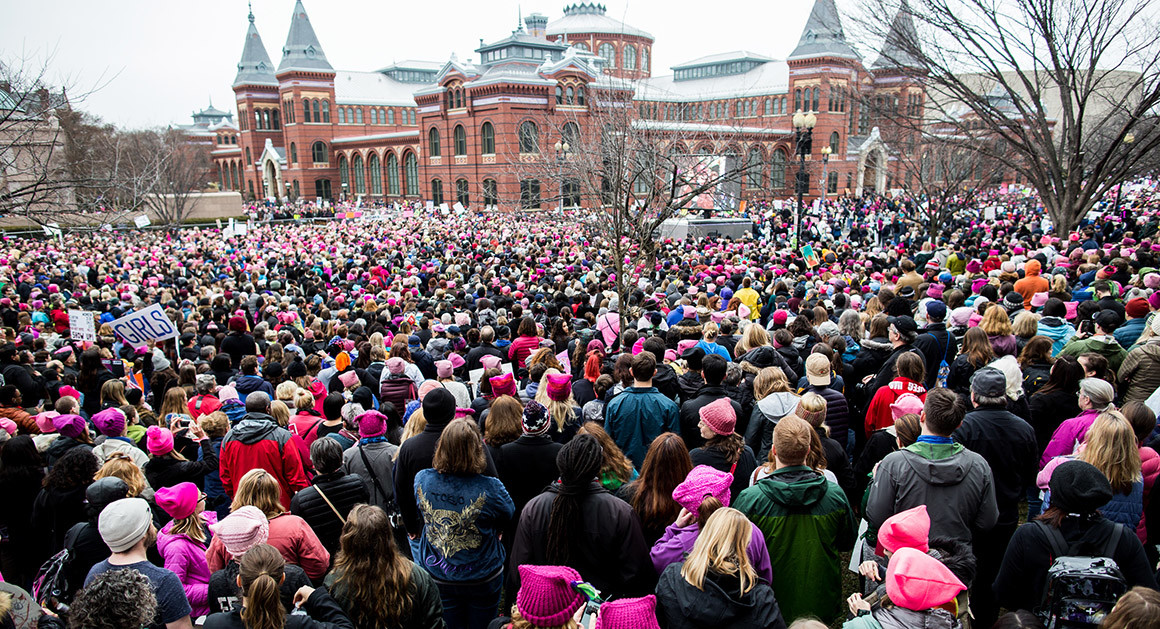 Though Mr Trump's named was mentioned frequently, the march, which organizers estimate attracted more than half a million, was not only about the new US president. Messages ranged from "Thank you for making me an activist Trump" to "We will not be silenced," but the common thread throughout the patchwork of signs was hope.

"It's about solidarity and visualising the resistance," said Jonathon Meier, who took a bus from New York. "And I think it not only helps with the healing process, but it gives me hope for the next four years." 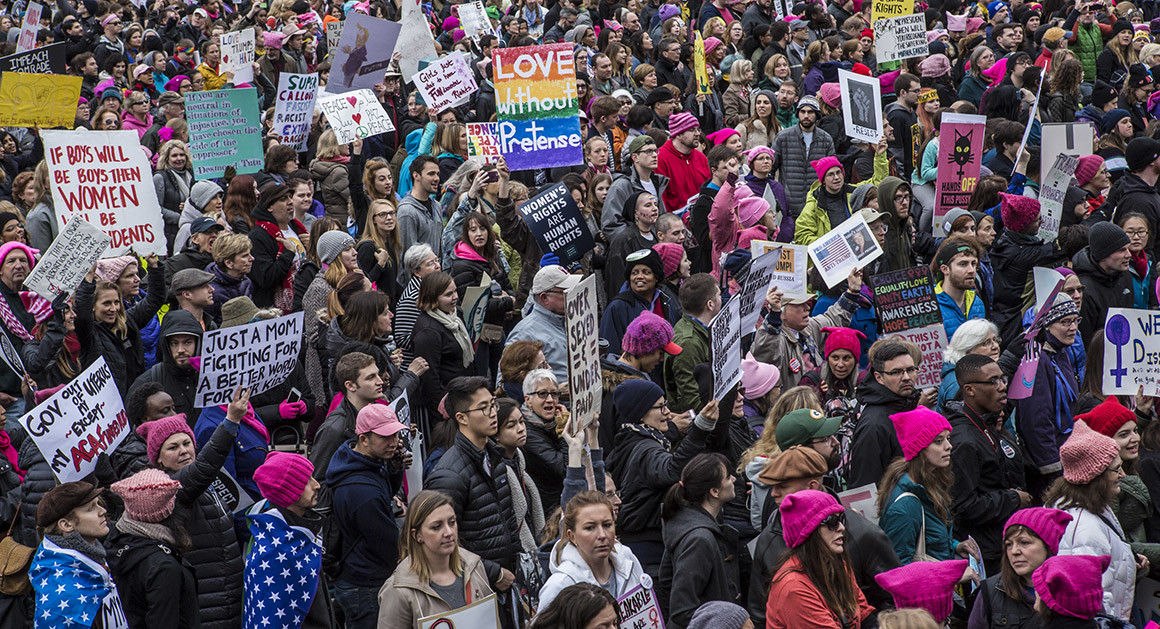 A sea of activists, some clad in knitted, pink "pussy" hats and others draped in American flags, ambled about the National Mall, stopping to catch a glimpse of some of the high-profile speakers and singing along to songs like "This Little Light of Mine". 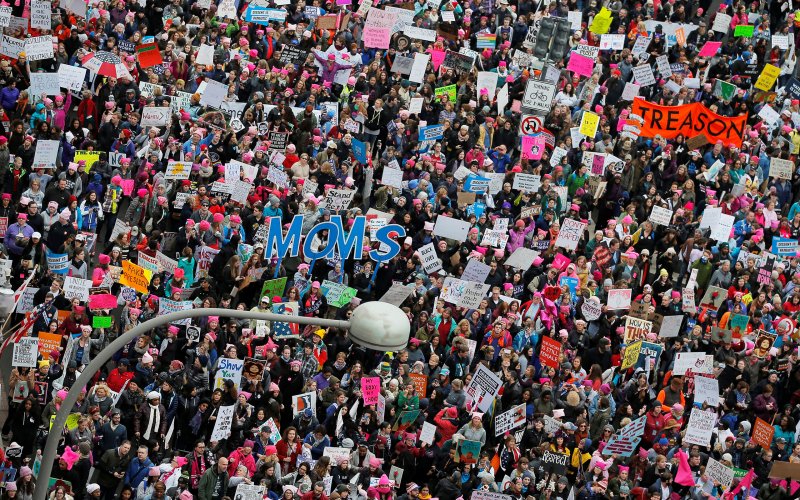 Peppered among the many protest signs were images of ovaries and female genitals, a nod to concerns over losing access to birth control and abortion care under a Trump administration. 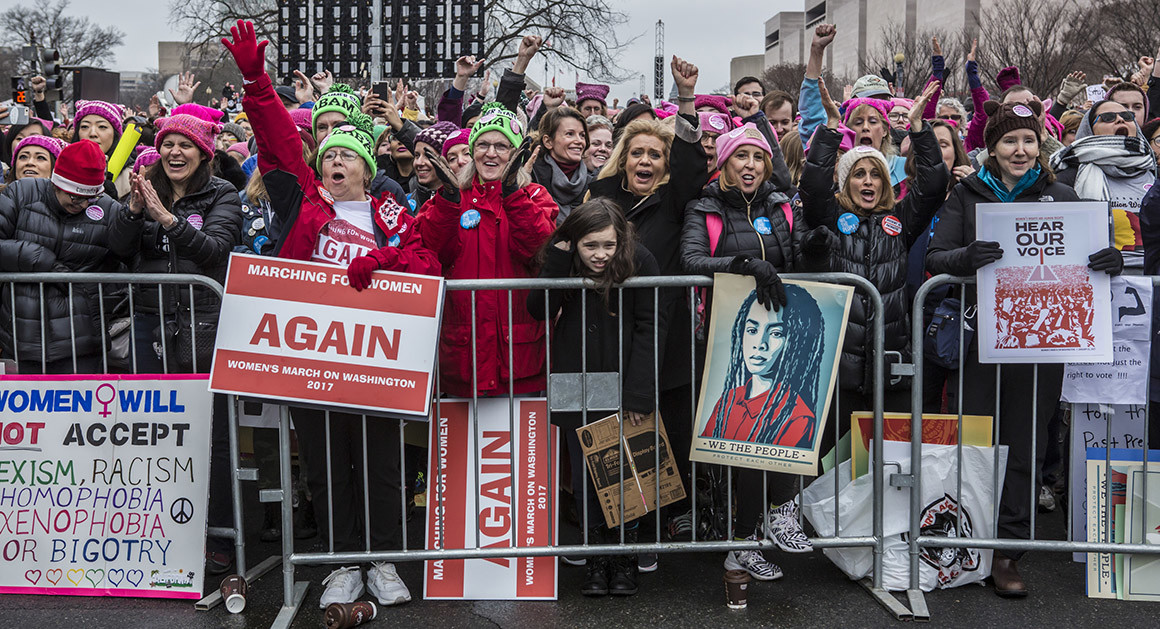 Jellema Stewart, who travelled from Buffalo, New York, said she was marching for her grandmother, who died at age 38 during an illegal abortion in the 1950s. "I'm here to make sure her voice is heard," she said. "I marched in 2004 for reproductive rights and it's now 2017 and we're still fighting for the same thing." Ms Stewart also said she was energised by thousands at the rally, insisting that it sends a message to the new president. "He gave racism a voice again," she said of Mr Trump. "So we have to be louder than the racism and discrimination that came out of this election and show him that we are definitely a force. To show him that we count and we will be watching." 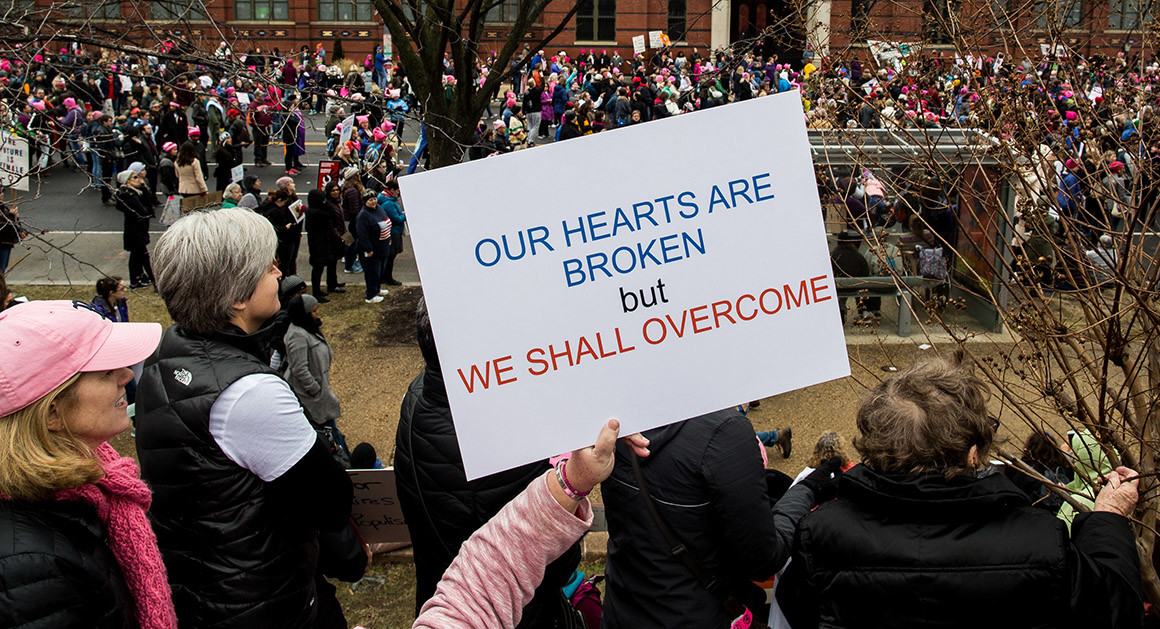 All eyes across the world seemed to be watching, not only the march in Washington, but the dozens of other sister marches that took place in more than 60 countries. 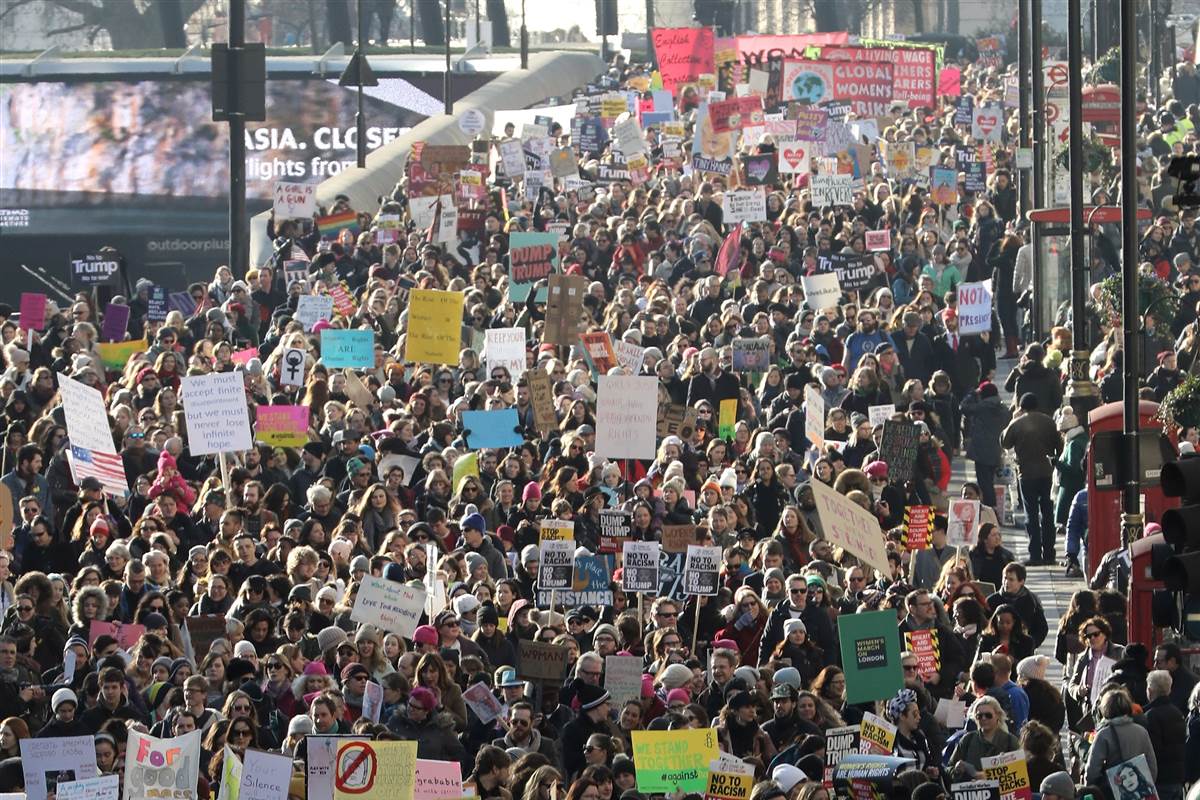 Aerial images showed thousands massing in so-called "solidarity marches" in the UK, Canada, and Australia as well as in US cities including New York, Chicago, Denver and Los Angeles. 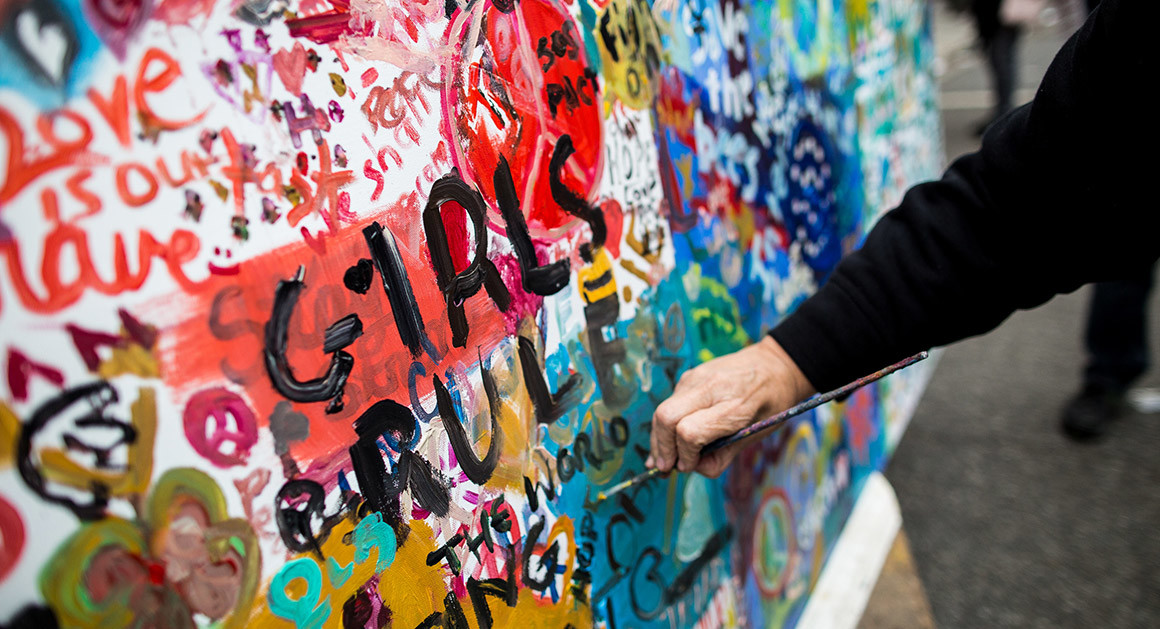 For demonstrator Chrystian Woods, the marches signalled that the US would not be defined by who was in White House. "It's not about being anti-Trump," she explained. "It's letting the world know that America is more than just that. America is love, inclusiveness and unity and that America is accepting people who are not like us." "I believe deeply this country is for all of us," said Brooklyn resident Amy Briggs. "I would have been very dejected yesterday if I wasn't able to be here and experience this solidarity," she said as a young female approached her to sign a rainbow flag. 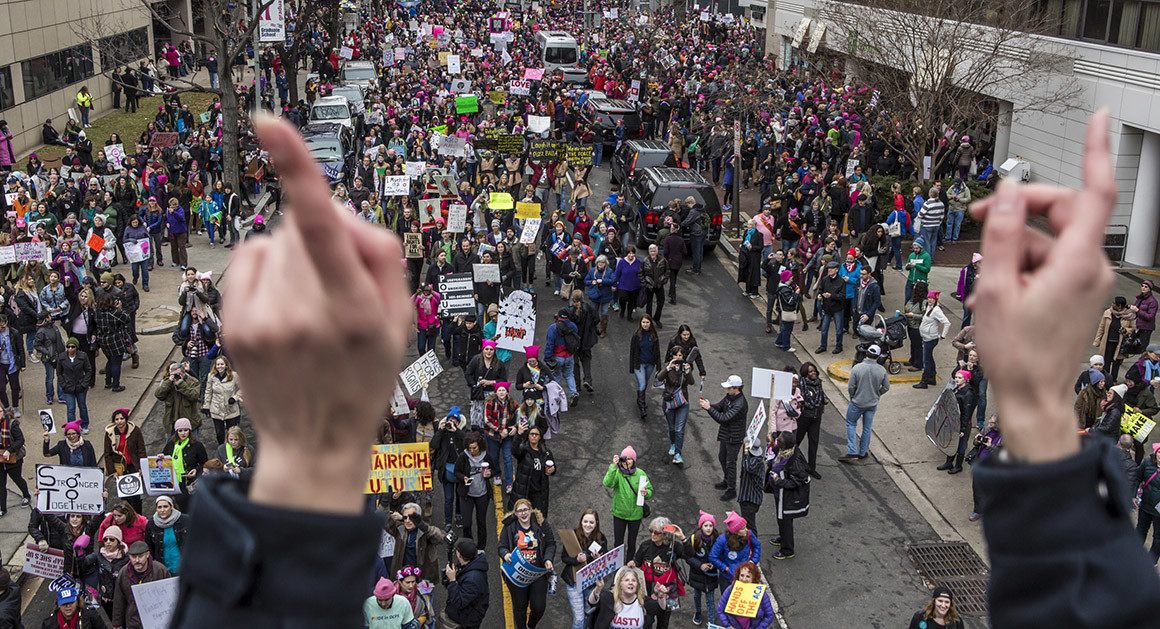 The mood was festive among the peaceful protesters, but some were cautious about what comes after the pink hats come off. Leigh Caputo, a Baltimore public school teacher, said she did not want people to think a march was the only solution. "I'm hopeful that this march mobilizes people because there's a lot of work to be done," said Ms Caputo. 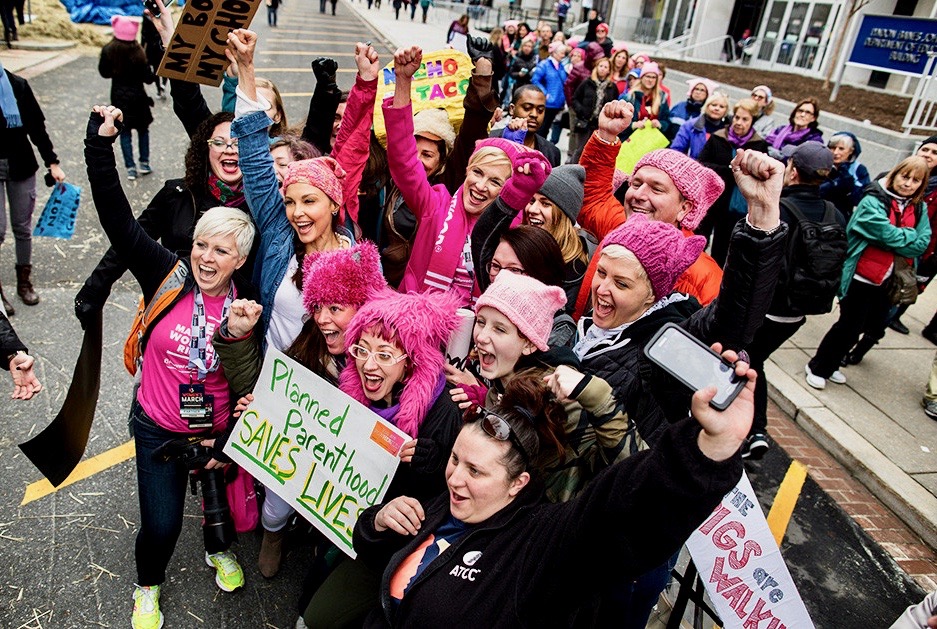 In the months leading up to the event, the organizers faced intense scrutiny over claims that the name exploited past African-American movements and catered to white women. 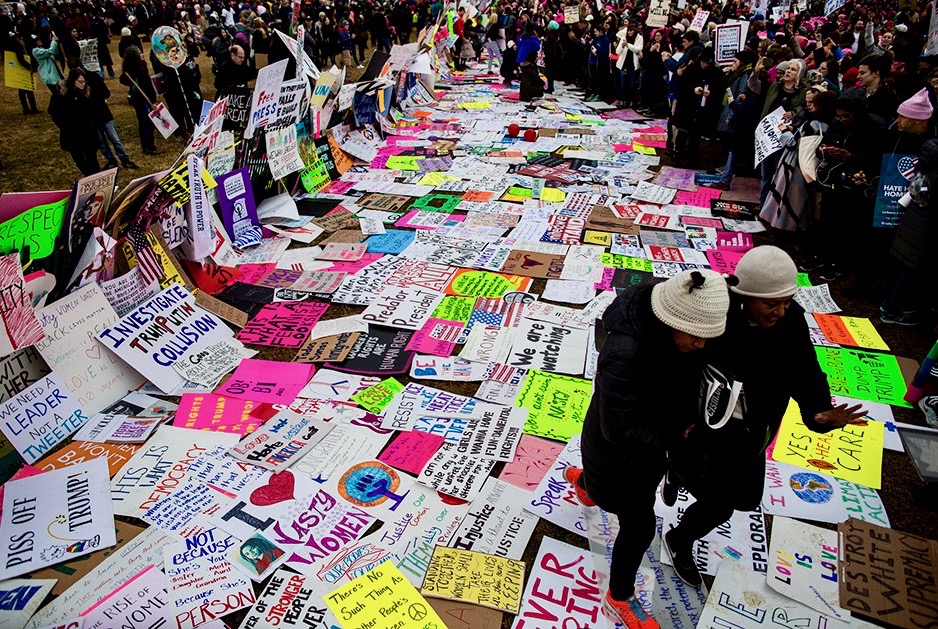 It is difficult to ignore the fact that 53% of white women did vote for Mr Trump while the female half of more than 90 million eligible voters did not cast a ballot at all. So what about the sea of white women at the march? Lesley Mansfield, who travelled from Sante Fe, New Mexico, agreed that it was puzzling that so many women voted for Mr Trump. "It's a reality we have to be aware of," she said. "But being here reminds us that there are people who think like we do - like the majority who voted for Hillary Clinton." 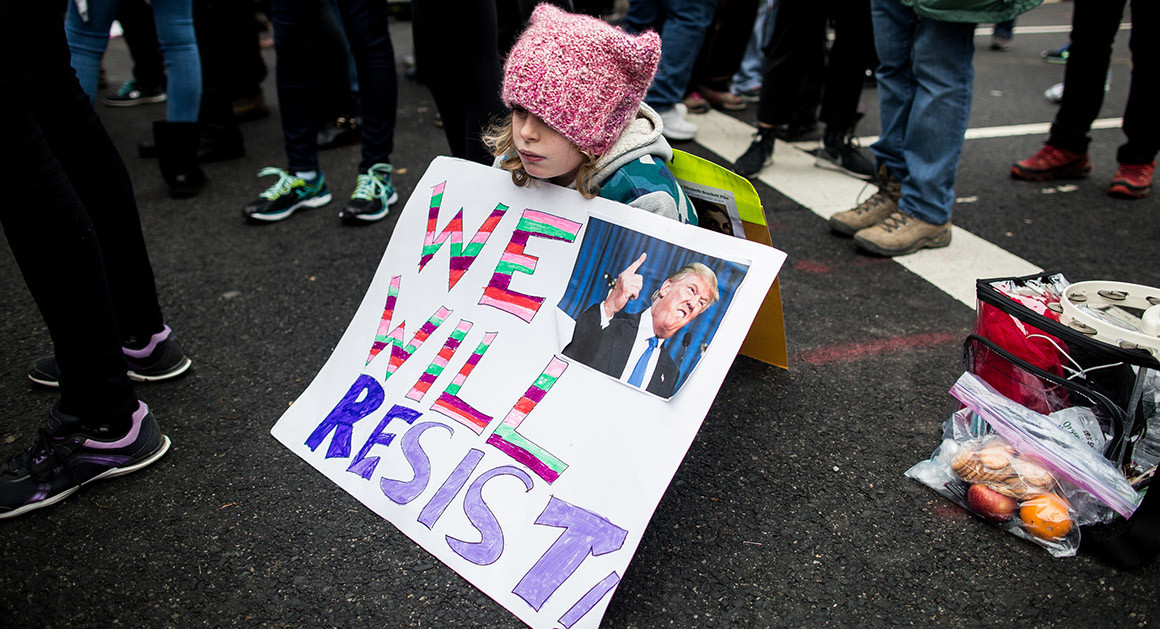 Those sobering statistics did not seem to loom over those in attendance on Saturday, and like the Trump supporters who stood in the same spot 24 hours earlier, they were full of hope for America's future. 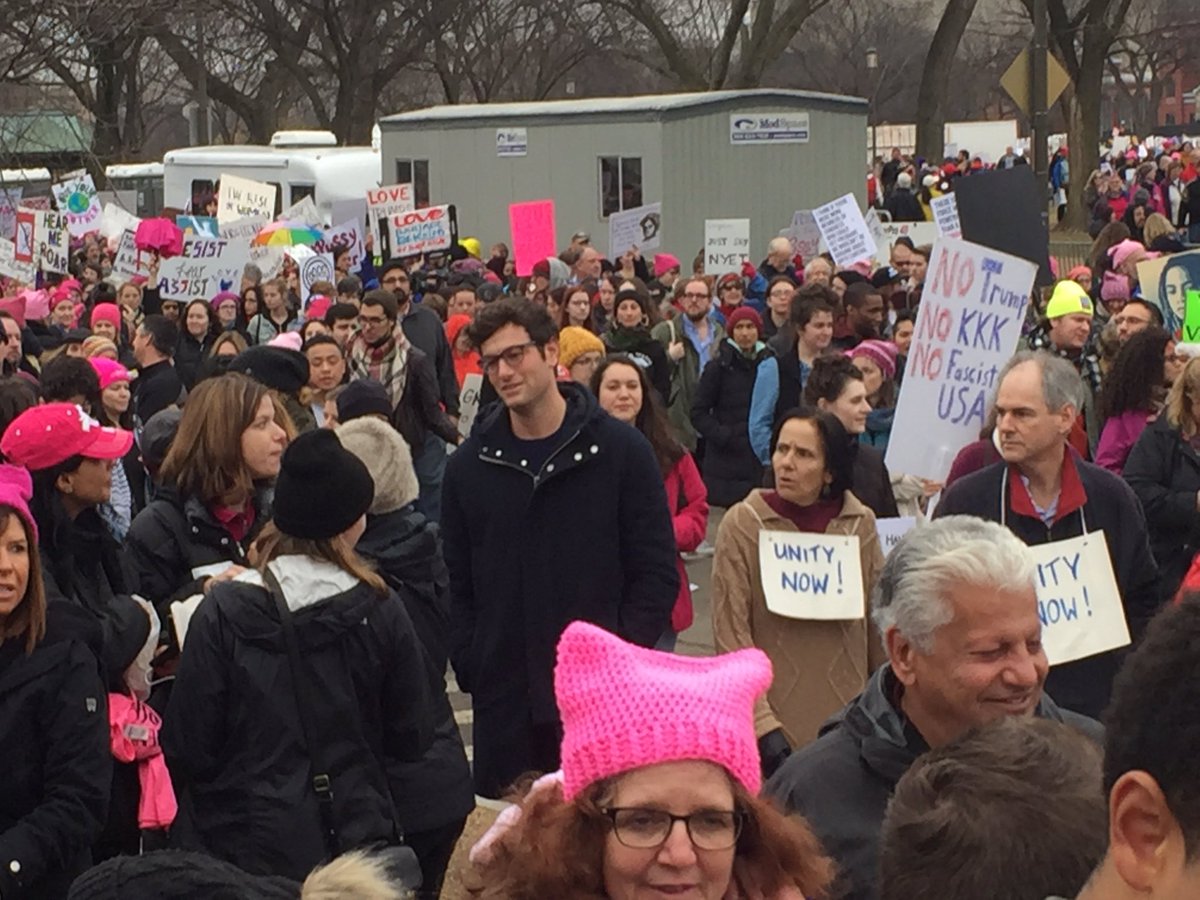 Joshua Kushner (above), brother of Special Advisor to President Donald j. Trump was spotted during the Women's March. "Just observing" he explained and said he did not vote for his brother's father in law for President.