The Lemniscate of Bernoulli - The Infinitum Shape

The Lemniscate of Bernoulli Described in 1694

A lemniscate is any of several figure-eight or ∞ shaped curves. The word comes from the Latin "lēmniscātus" meaning "decorated with ribbons."  In astronomy, an analemma (from Greek ἀνάλημμα analēmma "support") is a diagram showing the deviation of the Sun from its mean motion in the sky, as viewed from a fixed location on the Earth.

An analemma can be traced by plotting the position of the Sun as viewed from a fixed position on Earth at the same clock time every day for an entire year, or by fixed camera taking time lapse pictures throughout one year. The resulting curve resembles a long, slender figure-eight with one lobe much larger than the other, known as a lemniscate of Bernoulli. 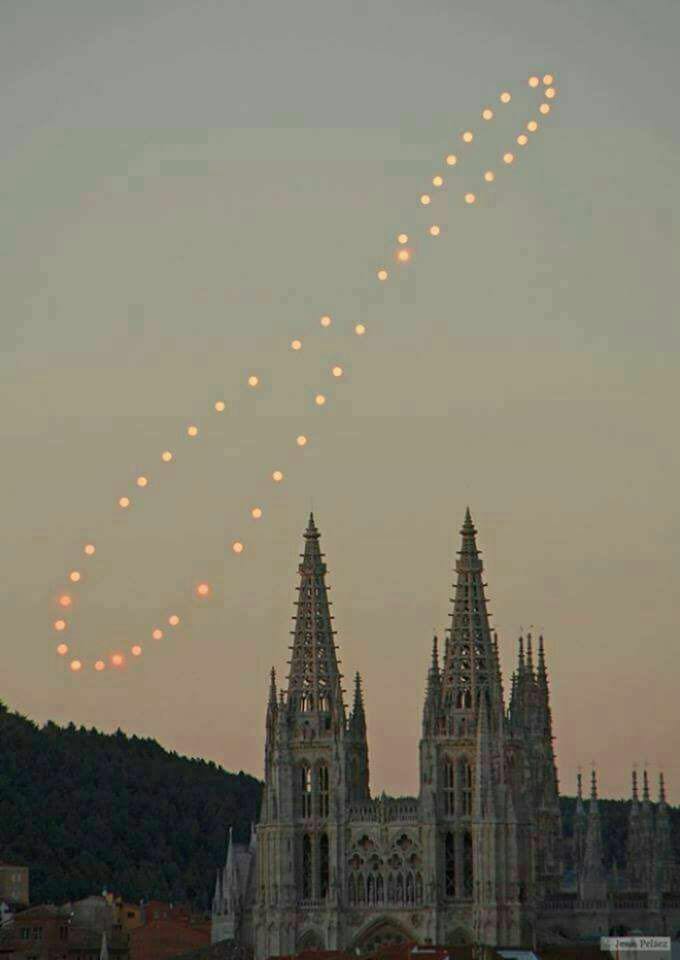 They Form the Infinitum ∞ Shape

The first analemma photograph ever made was created in 1978–79 by photographer Dennis di Cicco over New England in the United States. He made 44 exposures on a single frame of film, all taken from the same location with a solar filter. Since then, most photographers take a single foreground image and superimpose multiple Sun images on top of it 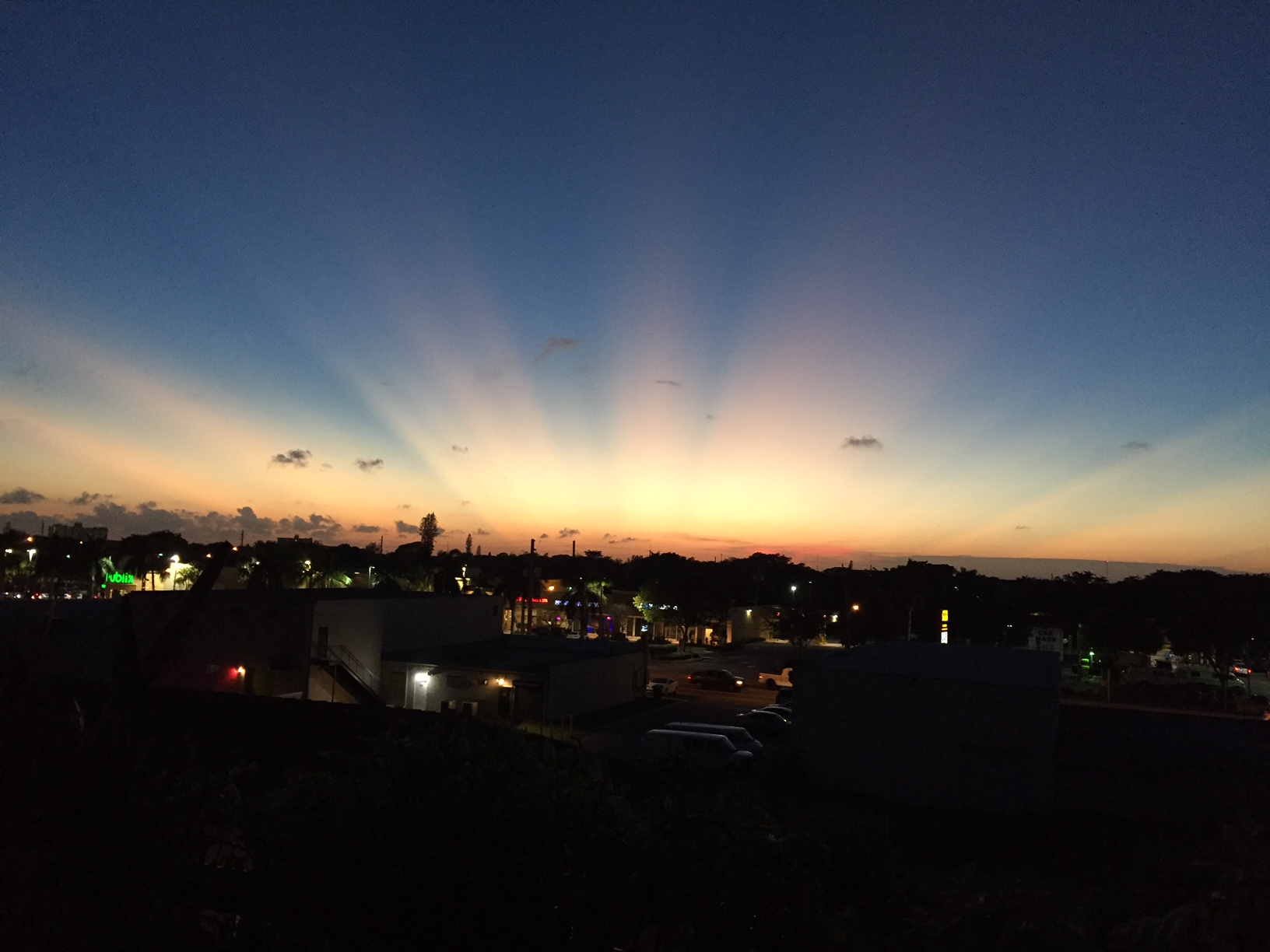 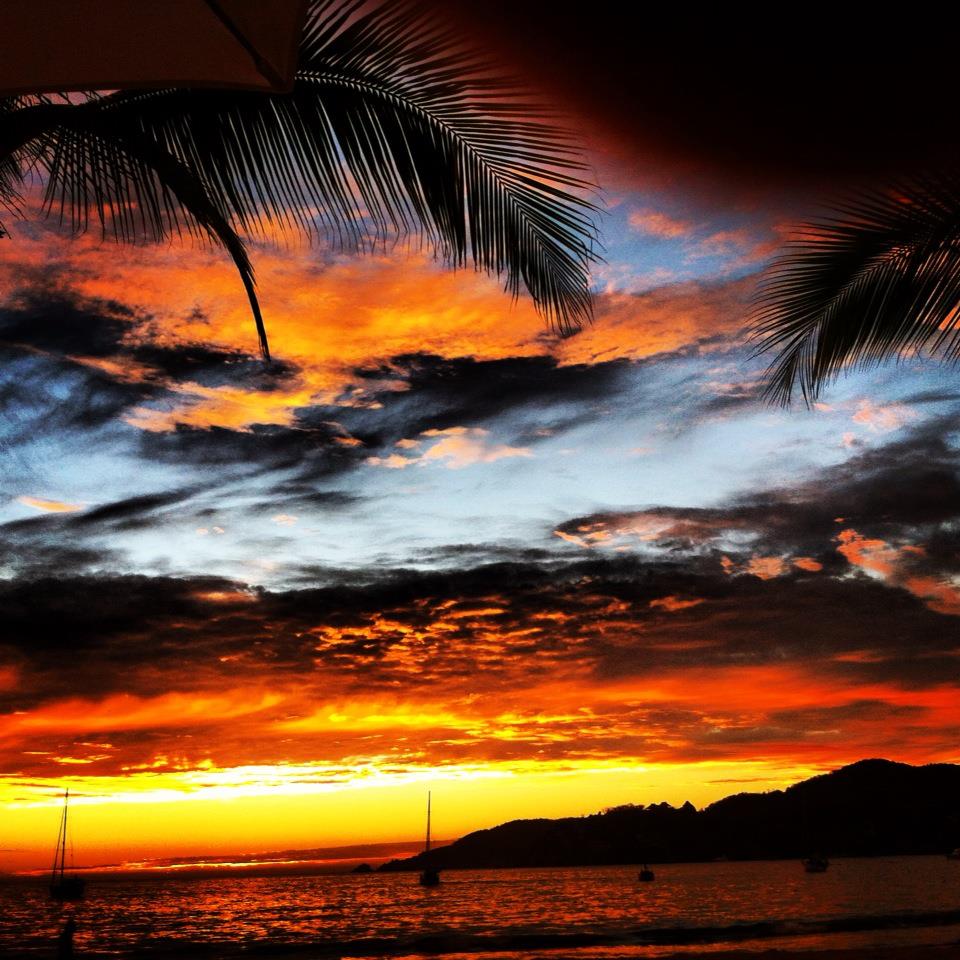 If it is marked to show the position of the Sun on it on fairly frequent dates, such as the first, eleventh, and twenty-first days of every calendar month, the analemma summarises the apparent movements of the Sun, relative to its mean position, throughout the year. A date-marked diagram of the analemma, with equal scales in both north–south and east–west directions, can be used as a tool to estimate quantities such as the times of sunrise and sunset, which depend on the Sun's position. 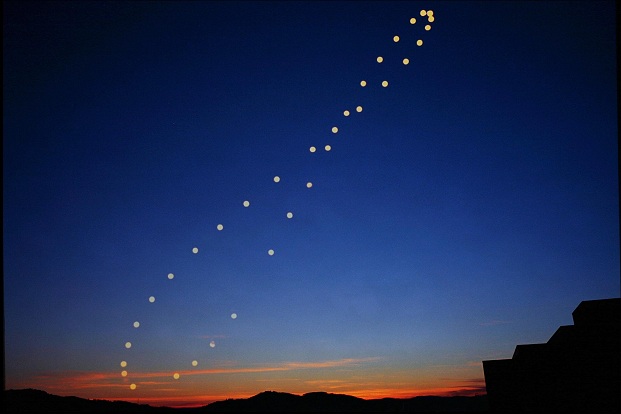 Generally, making these estimates depends on visualizing the analemma as a rigid structure in the sky, which moves around the Earth at constant speed so it rises and sets once a day, with the Sun slowly moving around it once a year.

Some approximations are involved in the process, chiefly the use of a plane diagram to represent things on the celestial sphere, and the use of drawing and measurement instead of numerical calculation. Because of these, the estimates are not perfectly precise, but they are usually good enough for practical purposes. Also, they have instructional value, showing in a simple visual way how the times of sunrises and sunsets vary. 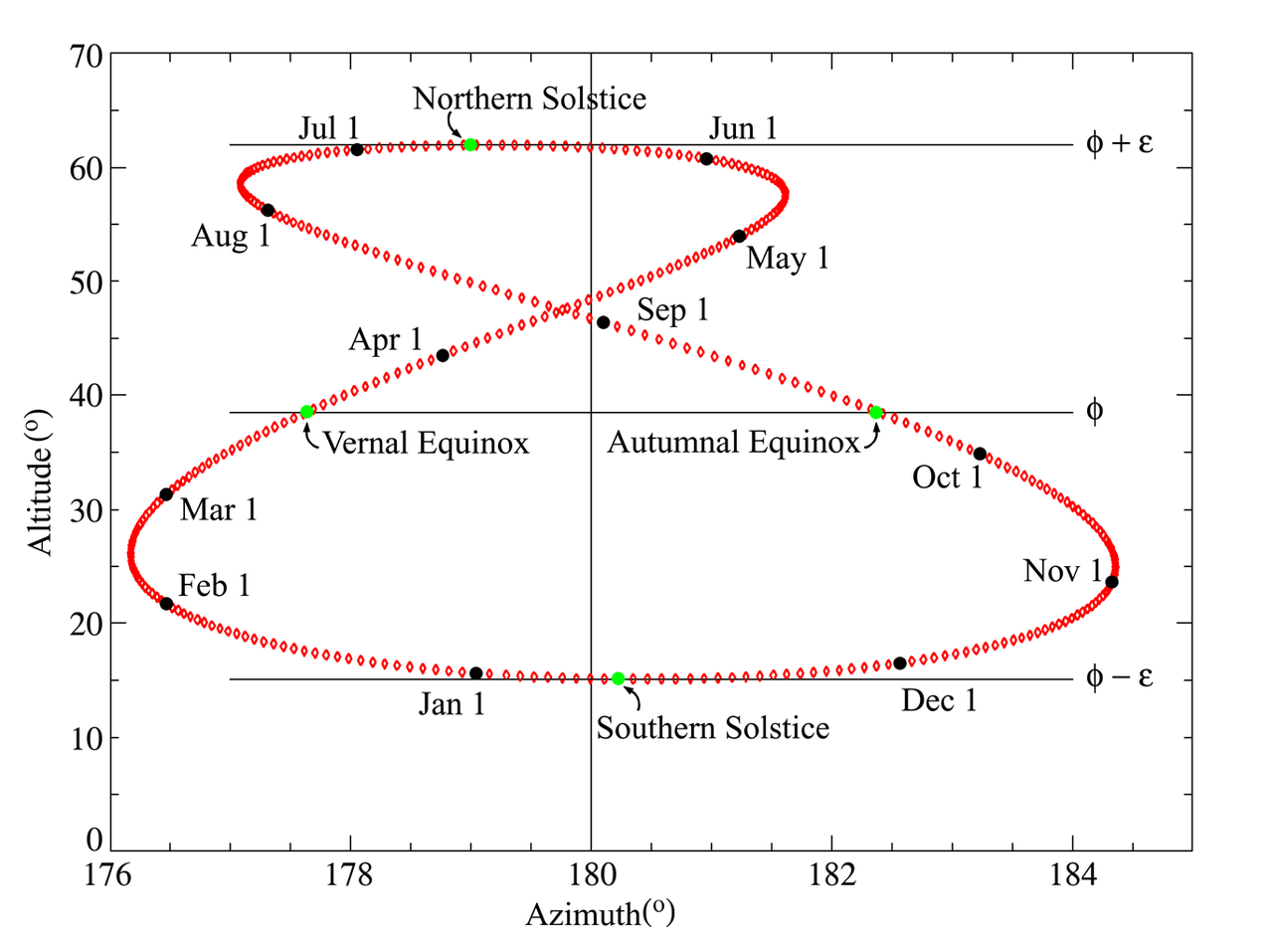 Diagram of an Analemma Looking East in the Northern Hemisphere. The Dates of the Sun's

Position are Shown.  It has been Calculated, not Photographed 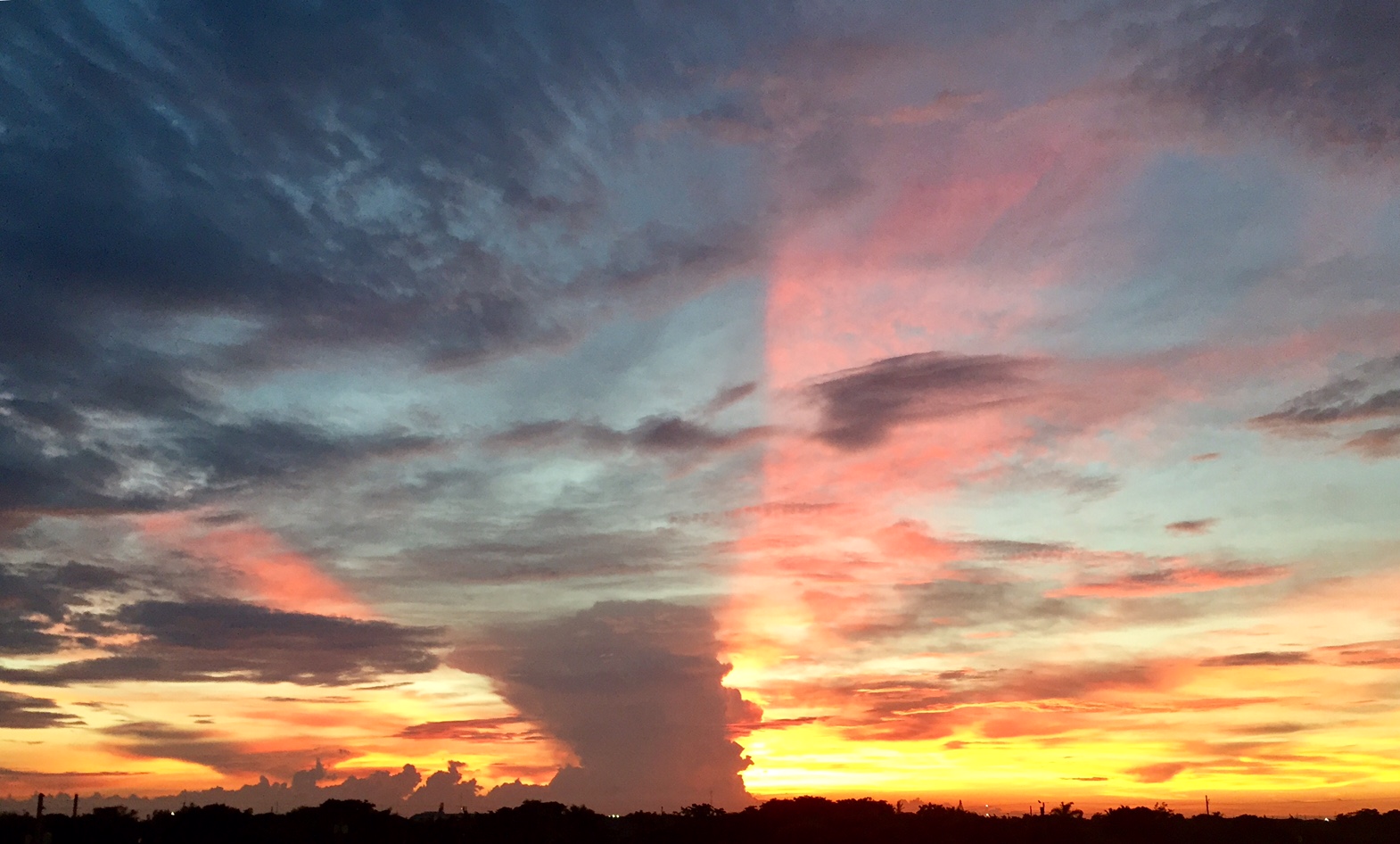 Earliest and Latest Sunrise and Sunset: 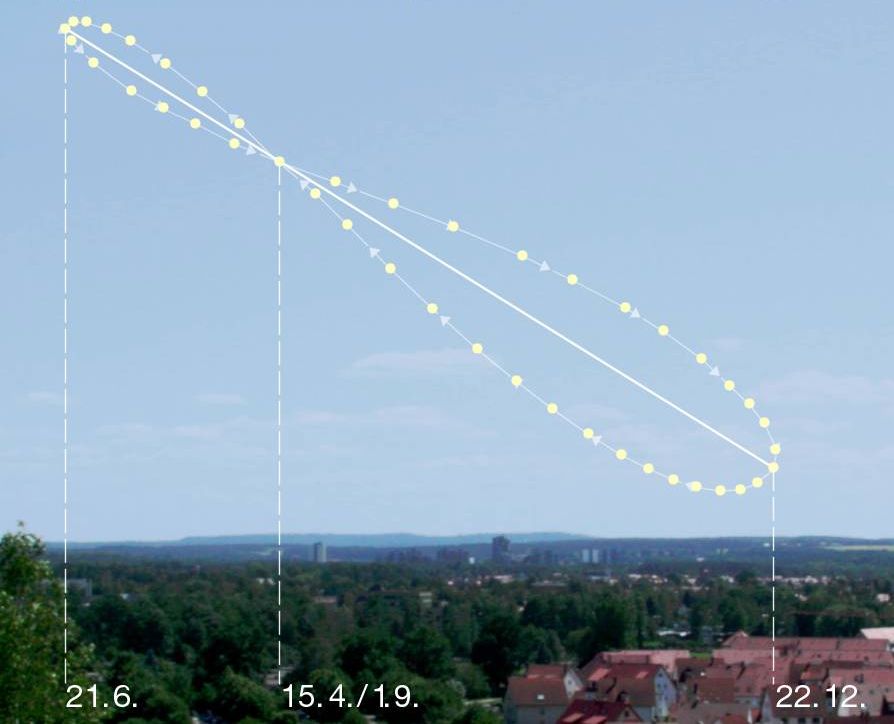 None of these points is exactly at one of the ends of the analemma, where the Sun is at a solstice. As seen from north-mid-temperate latitudes, as the diagram shows, the earliest sunset occurs some time before the December solstice – typically a week or two before it – and the latest sunrise happens a week or two after the solstice. Thus, the darkest evening occurs in early to mid-December, but the mornings keep getting darker until about the New Year. 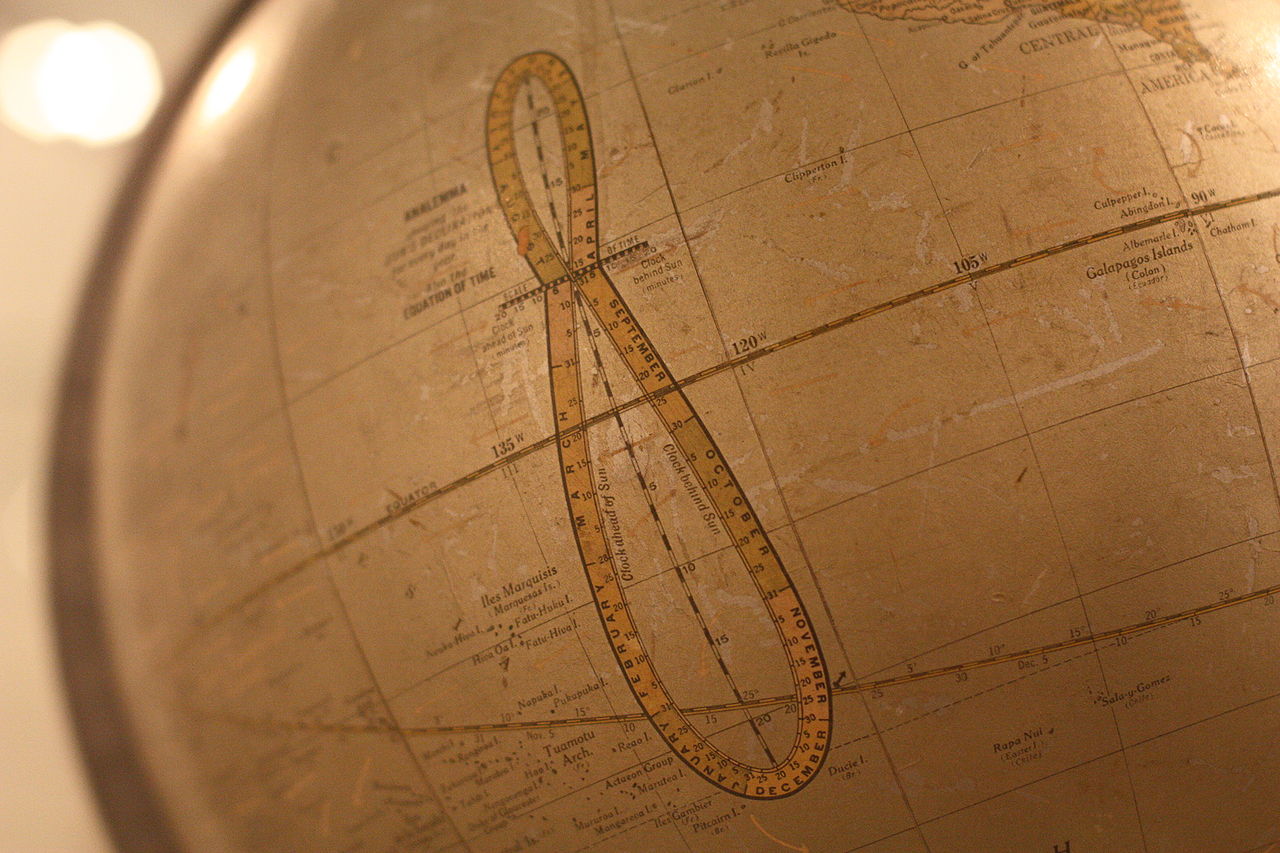 The major arcana are in some ways the most important cards in the tarot deck. Generally they are the cards that a new tarot user will learn first; partly because there are fewer of them, (there are 22 major vs. 54 minor arcana cards) and partly because they are considered to signify the deeper, more meaningful, more “spiritual” parts of life.the Magician and Strength often contain lemniscates, and the Two of Pentacles traditionally incorporates a large lemniscate entwined around the two discs. 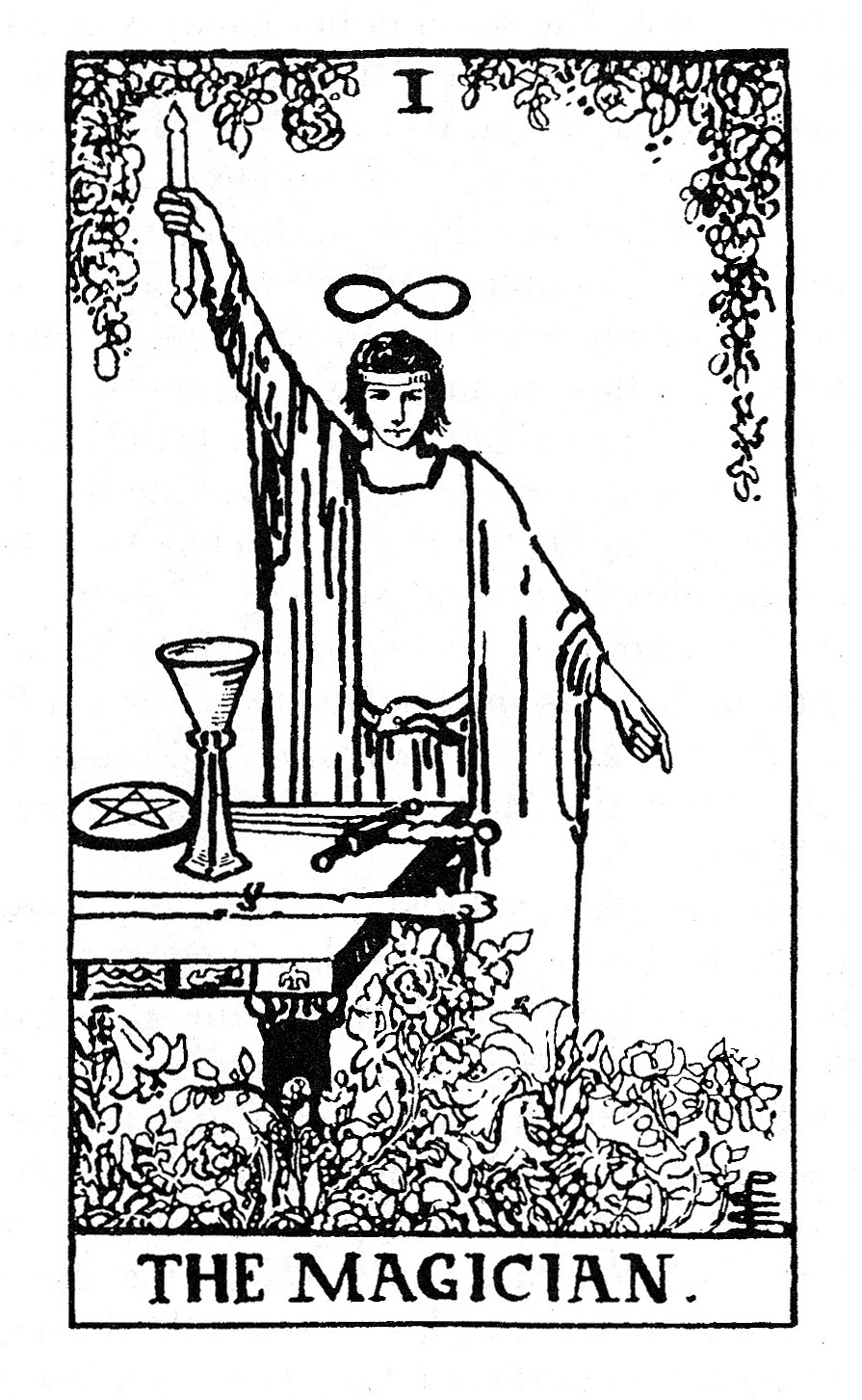 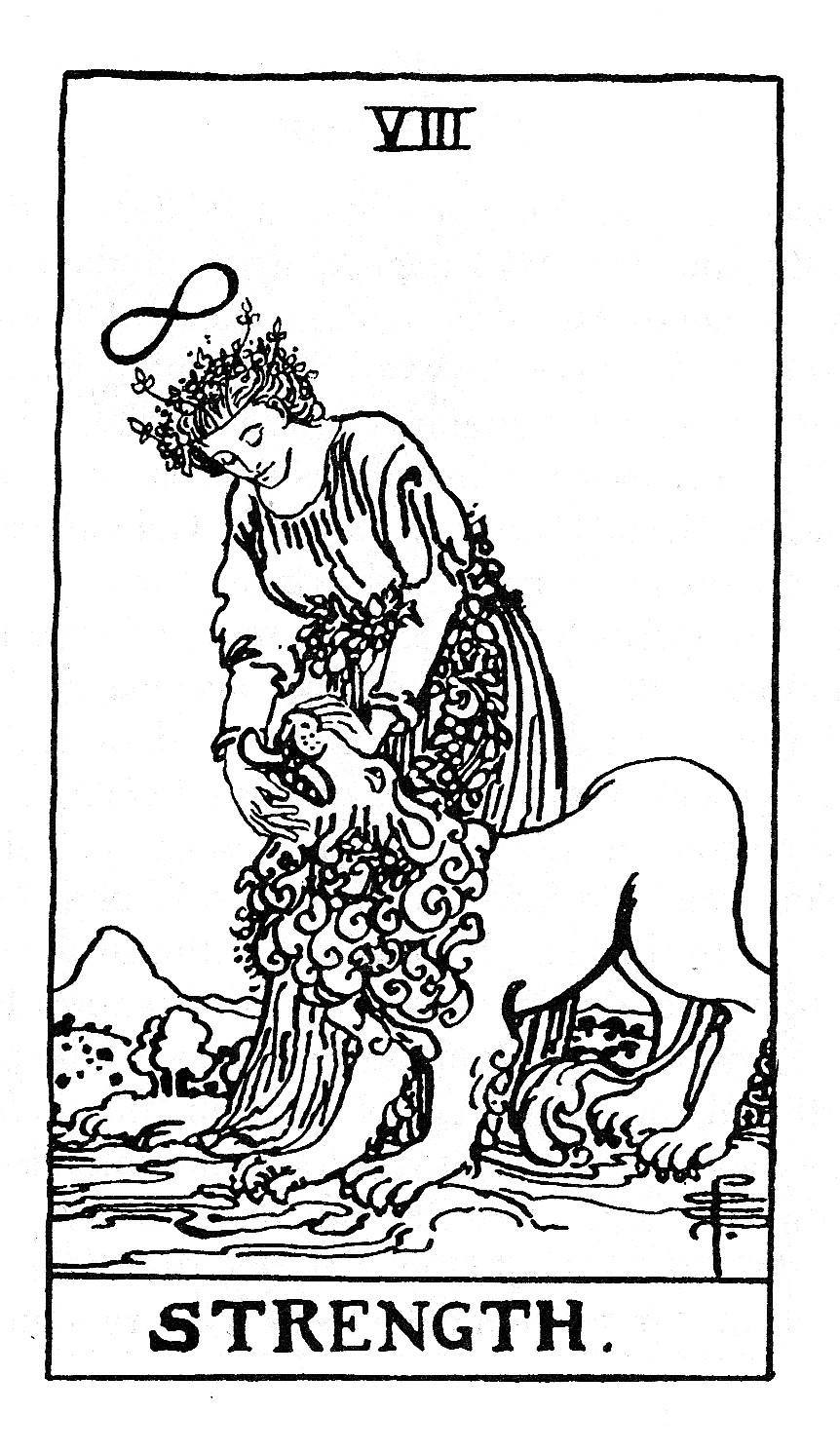 The shape dates back to Greek Neoplatonist philosopher-mathematician Proclus. He called the shape a hippopede, or “horse-fetter,” the twist of rope used to hobble a horse. One loop around each front hoof and voila! The horse’s power is commanded, which can play into potential Tarot meanings.The analemma is the same shape in grand, celestial terms. It’s the figure-8 found on the side of a globe, its northern- and southern-most ends – at the Tropic of Cancer and the Tropic of Capricorn, respectively – marking the solstice extremes of the Sun’s motion, where the Sun “turns around.” More spectacularly, the analemma is also the Sun’s motion as seen in the sky over the course of a year. Viewed daily, same time and vantage point, the Sun’s position shifts higher and lower, farther east and west. Over the year, we see a lop-sided figure-8 emerge, as in the photo above. 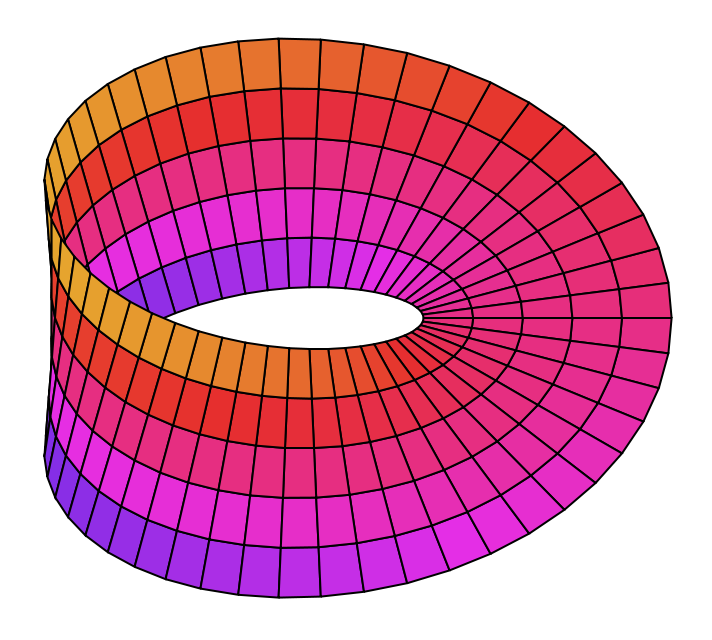 By comparison, the Möbius strip is simple, earthy, physical. It’s just a strip of paper, its ends joined to create a ring but – vital! – with a twist in the paper so that the outer side becomes the inner, and vice versa: It has no end. Find Möbius strip details here. Flattened out, the Möbius strip is the origin of the recycling symbol. 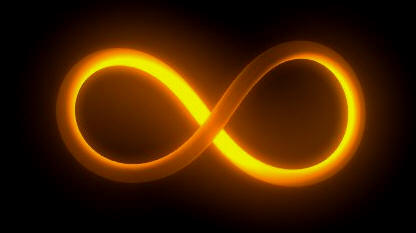 So far, these symbols may read like math or science, but spiritually their meanings expand: The Sun’s motion and our ability to track it and celebrate its turning points; the perpetual continuity found in the lemniscate and the Möbius strip; our awareness of our earthly presence, expressed in the recycle symbol, and so much more. Symbols are our visual tools, and in these, What goes around, comes around.

The Solar Dynamics Observatory (SDO) wil be celebrating its 7th anniversary since it launched on February 11, 2017. This time-lapse video captures one frame every 8 hours starting when data became available in June 2010 and finishing February 8, 2015. The different colors represent the various wavelengths (sometimes blended, sometimes alone) in which SDO observes the sun.