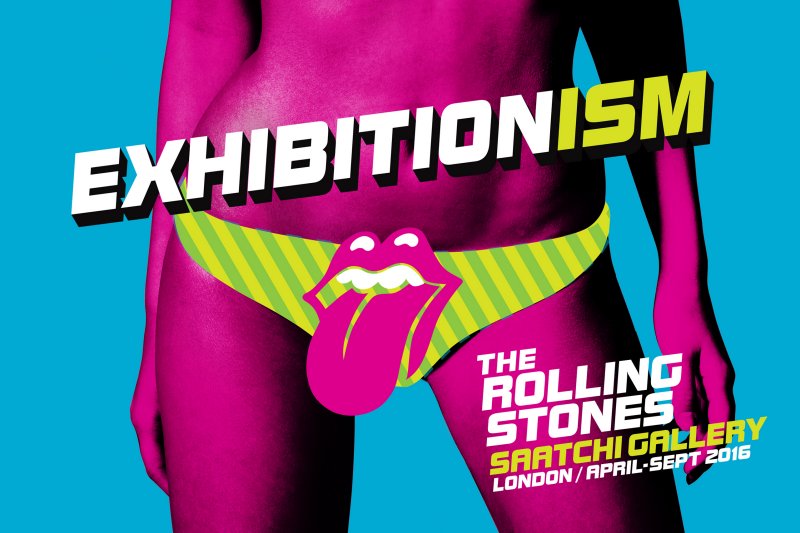 The Rolling Stones have created a lavish, over-priced celebration of themselves at the Saatchi Gallery. It's hard not to love them for it. We're greeted by a wall of screens pulsing with Mick Jagger's trademark strut and snatches of the great Rolling Stones' riffs and licks.The footage at the start of Exhibitionism, a massive gallery show devoted to the Rolling Stones in London, begins with an early '60s gig; Jagger is shirtless and throwing buckets of water over a tiny, bouncing crowd. It ends with their long-overdue and triumphant Glastonbury debut in 2013.

Since this is the first time the exhibit has changed locations – after New York, it will move to Chicago and somewhere on the West Coast before heading to Australia – the biggest challenge of setting up shop at Industria was space. "We had a white-box gallery space in London and this is more warehouse-y with an industrial feel, it's also smaller, so we've had to shrink it down a bit," Exhibit curator Ileen Gallagher says. "But I think it feel great here. It's so raw and the space itself has a lot of energy." 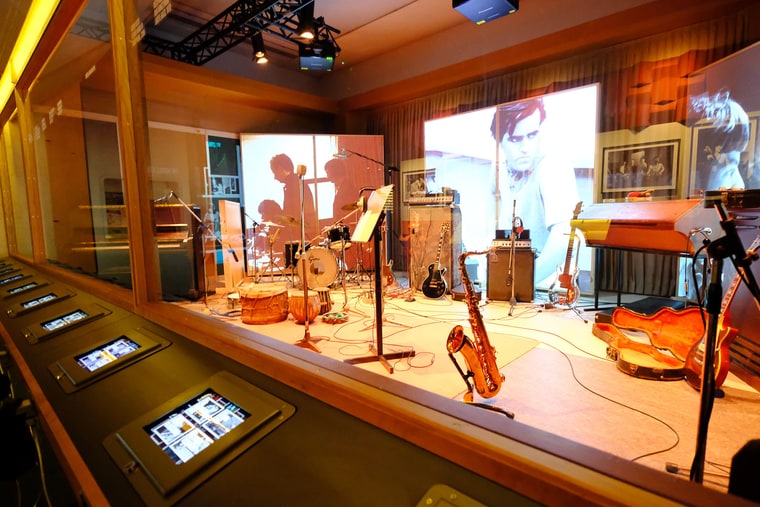 For the London presentation, the band members were heavily involved in the ideation of the exhibit. They weighed in at design meetings and Jagger reviewed and gave feedback on all of the video, prior to its installation. Other band members offered their thoughts on what they included. (Charlie Watts asked them not to include a mariachi-styled shirt he once wore.) 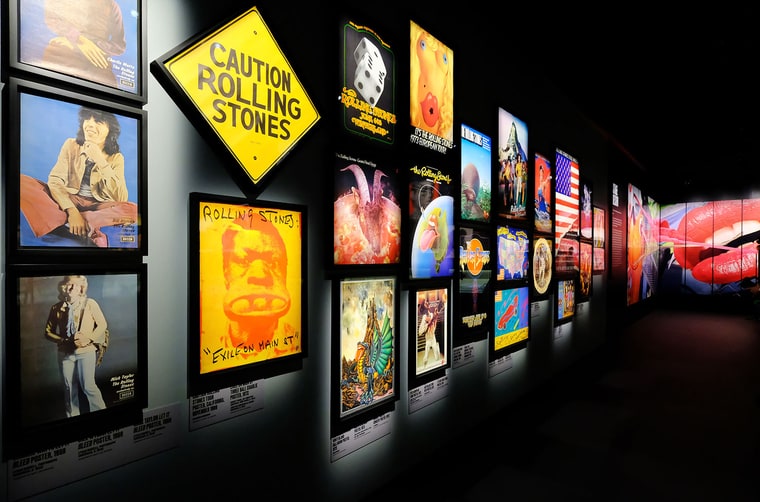 Gallagher says Richards was especially keen on the recreation of the band's 1962 apartment: "He said, 'Oh, I'm home.'" 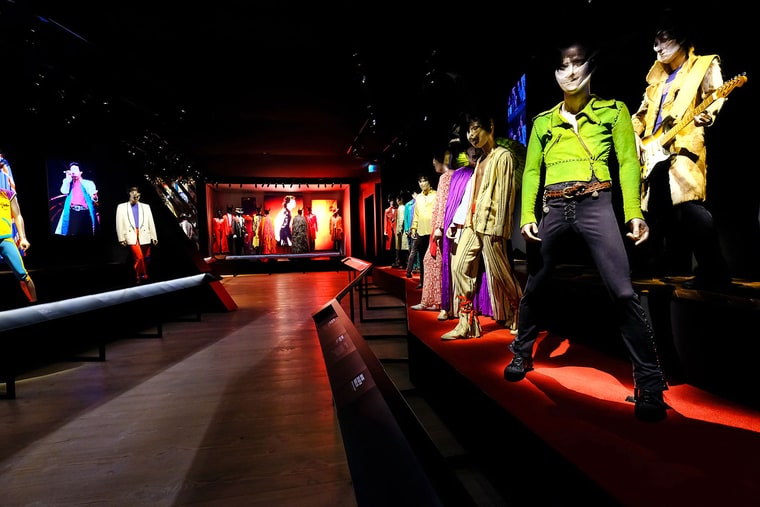 The baby boomer were dancing at the front when the Stones bloomed from raucous pub band into rock 'n' roll powerhouse—many teenagers in England gathered to help film an early promo. Half a century later,  it was the turn of Millennials to witness music history at firsthand during what the founder of Glastonbury would later describe as the festival's all-time greatest set. Spanning London generations with the very same epic tunes, the Rolling Stones have bettered or outlasted every rock 'n' roll band to set foot on stage. One of the great constants of British life is Jagger and co. swaggering off with our money. Their latest ruse may be the best yet: a magnificent and bombastic retrospective exhibition with exorbitant ticket prices ready to be rolled out for a global money-making tour. Decades of stadium shows have made millions, but with the band members now heading into their mid-70s; they have struck upon a wheeze that will keep the crowds rolling in while they sit back in their expensively upholstered armchairs. 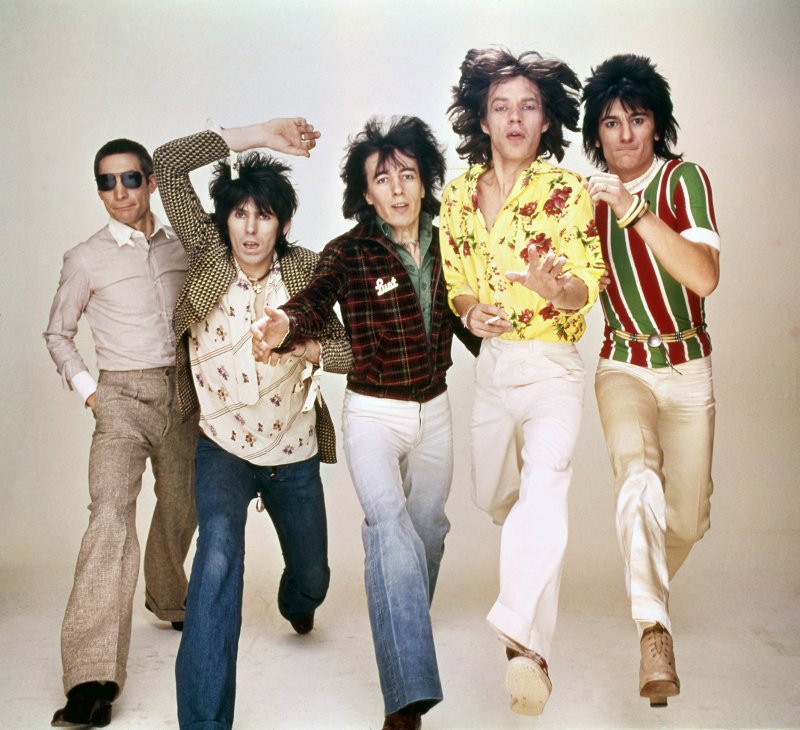 The blockbuster show is housed in the Saatchi gallery at the eastern end of the Kings Road, West London's crossfire hurricane where both the Swinging Sixties and the Rolling Stones were born. The band lived at the other end of the road—their first room-share on Edith Grove is recreated in intimate detail inside the exhibition. Four crowded rooms are brimming with cigarette butts, discarded beer bottles, and filthy plates towering over the kitchen sink. "It was a pigsty, basically," says Keith Richards in the first of dozens of video, audio and written commentaries that accompany visitors around the exhibition. With the band members themselves as your guides, it feels more like an immersive autobiography than an exhibition. The band are credited as producers of the show and their control has both positive and negative effects This is clearly a sanitized version of an extraordinary sex- and drug-soaked adventure. Even the overflowing ashtray doesn't smell in this cleaned-up recreation. 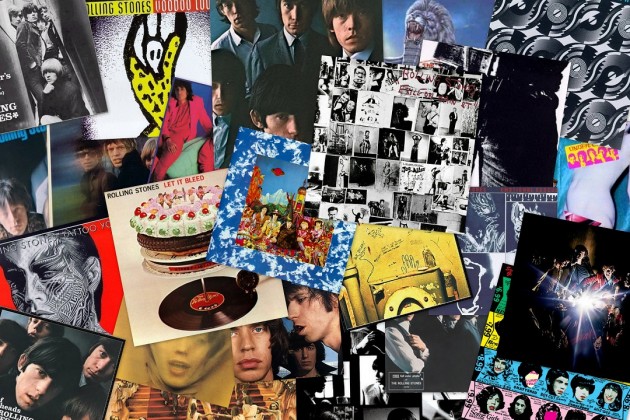 The real-life 102 Edith Grove, which is a mile west of the show, remains disheveled and ungentrified. Two "no dumping" signs are fastened to the wrought iron railings in front and moss is growing out from beneath the cracked paint on the first floor window ledge. As you walk towards the lavish Saatchi gallery, the King's Road—where independent boutiques once provided extravagant clothes and esoteric footwear for the band—is now dominated by sushi chains and international fashion brands. "The scene was great down the King's Road," recalls guitarist Ronnie Wood. "Where you went to be seen—or you could just watch the theater go by." Charlie Watts, the drummer, adds: "It's a bit of a high street now—in those days it was a bit different." 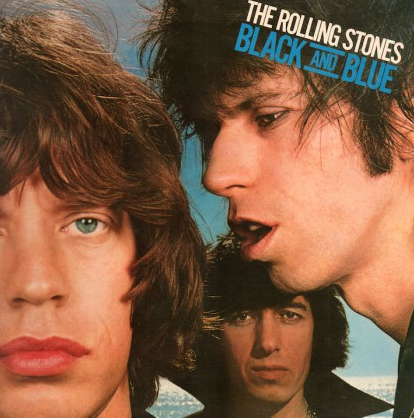 Arriving at the show, it's obvious that we are no longer in swinging, bohemian West London. We're deep in the modern version—a rich-man's playground where Russian oligarchs and investment bakers vie with tourists for tables in overpriced, average restaurants. The band made the same journey long ago. After paying almost $40 for one ticket and an audio guide, visitors are met by huge security men in black suits with ear-pieces. It seems unlikely that the middle-aged couples making their way through the retractable barriers are going to cause them much trouble. 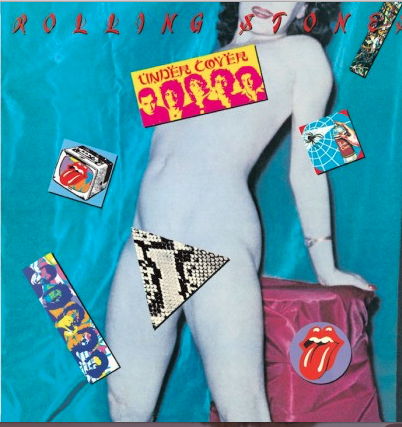 Once we reach the heart of the exhibition, concerns about rock stars selling out start to be eased by the power of the music. Buddy Guy, a Louisiana Blues guitarist, recalls the moment the young Rolling Stones arrived in the U.S. to work with their Blues heroes. "I had never saw a white man with hair that long and boots this tall," he says. "The British made the Blues more popular than any African-American." An old clip of Muddy Waters, himself, appears on screen: "Thanks to the Rolling Stones," he said. "They introduced my music to the white kids of the United States." Next we are invited into a rebuilt studio where those bluesy guitar riffs were laid down. Don Wass, one of the Stones' long-time producers, is on screen to talk us through their sessions. "They are relentless in their pursuit of a good take," he says, explaining the months of hard work that would go into a single song. But more than that, Wass impresses upon us the sheer talent bursting from these men. "One of the things about Mick's vocals is if you're mixing the song and you bring up the faders on the board, you only have to bring up Mick's vocal a little bit and he comes leaping out of the speakers," says Wass. "The definition of a star is someone who can jump out—whose voice jumps out—most people don't ever do that. It's not something you can learn. It's just some God-given thing that you're born with." 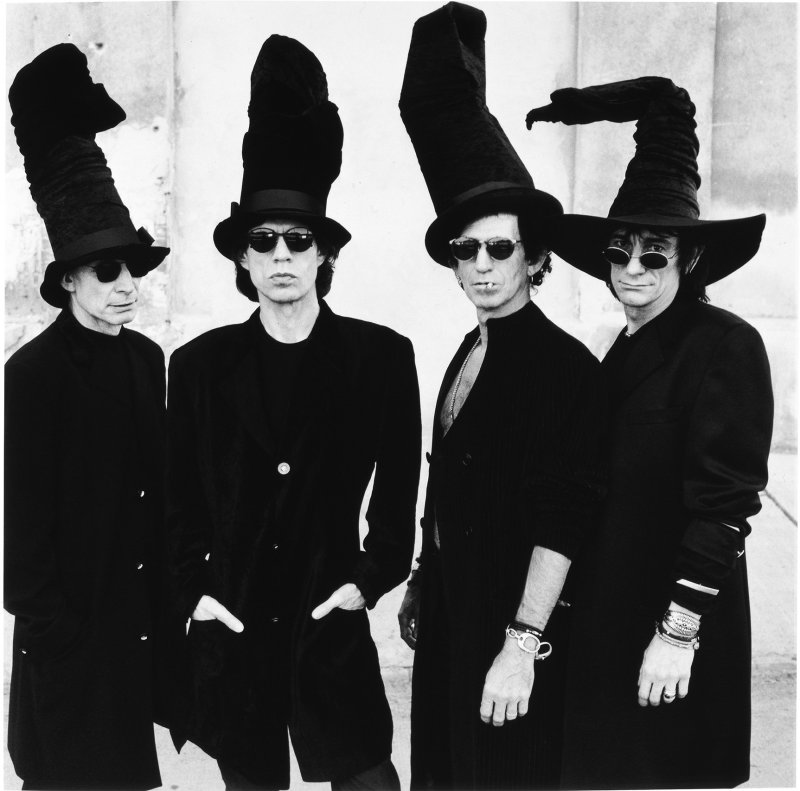 Once we've heard the master, we get a chance to play producer ourselves. A digital mixing desk is amazingly good fun to play with. By fading the different parts up and down you can explore the way the Rolling Stones' trademark sound is created.Take out the brass section from Honky Tonk Women, or max out the bassline in Sympathy for the Devil, one thing is clear—Wass is right, no matter how low you fade the vocal, Jagger's extraordinary voice somehow punches through. 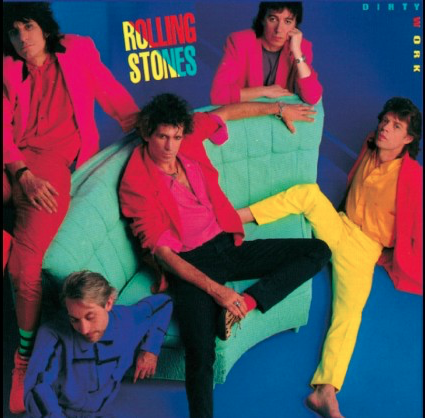 Next Martin Scorsese takes us on an amusing tour through the movies made about the Rolling Stones—which culminates in his own film Shine a Light from 2008. "The Rolling Stones music was part of me. I felt like they were speaking to me directly. Their music cut deep, it was dangerous... and accepting of the dark side of human nature," he says. A section on their videos, however, which featured apologetically brief snatches of their music videos, shouts out what we already knew—this is a live band. They were a rowdy covers band first who leaned to write their own songs, rather than musical theorists who composed first and got dirty playing live later. They were born on stage, and surely at least one of them will drop dead on stage. 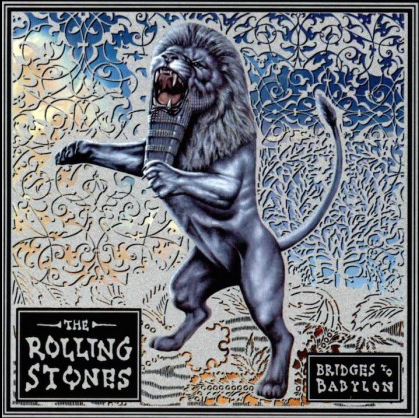 The clothes seem to make the same point. A room full of mannequins wearing the original stage outfits looks like a ludicrous pimps' paradise—but when you see the video and the pictures of Jagger and Richards writhing around in them, they are transformed. A rare early shot of the band looking dorky in matching dogtooth blazers makes them look like a sub-Beatles pop combo. That look was soon replaced by clothing that would help turn the London fashion scene upside down. "It was a very new development that famous photographers would take pictures of rock bands. Suddenly we became part of the whole sixties phenomenon, breaking through the boundaries of pop music into fashion, films, television and everything else," says Jagger. He knew that the image was crucial in their quest to become the world's biggest band. "Musicians like to say it's only about the music, but it's not, of course." Amid the style and swagger on show, there is more evidence of sanitization. Richards' battle with drugs or falling out with Jagger is scarcely mentioned. There's even an odd little attempt to cover up the self-evident commercial instincts of the band. 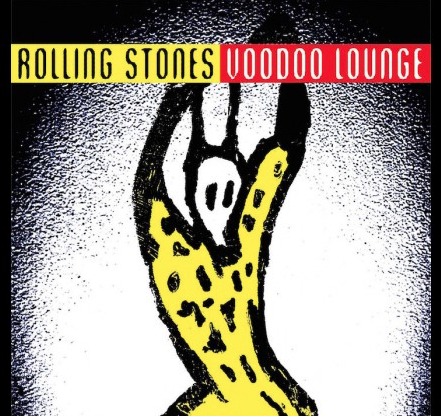 Above some Andy Warhol images of Jagger is a quote from the frontman: "Andy and I decided to do a set of lithographs. It was an artistic thing. He was also making money and, you know, Andy was a guy that wanted to make money." When you listen to Jagger's interview on the audio guide, he actually says: "We were making money." It's a small distinction, but it seems both unnecessary and discomfiting to try and twist the truth. By the mid-1970s, the Rolling Stones were ready to take their studio and billboard success to the next level. "We did a tour of arenas, which we'd never done before and—believe it or not—no one else had ever done before," says Jagger. The Tour of the Americas culminated at Madison Square Garden in 1975. The stage, which was in the middle of the audience, was shaped like a lotus flower. "I had to get inside the lotus and, climb up a ladder and hang on like grim death to one of the petals, which then opened to reveal the band playing," says Jagger. The sketches and stunning scale models of the some of the sets are on show in the exhibition. 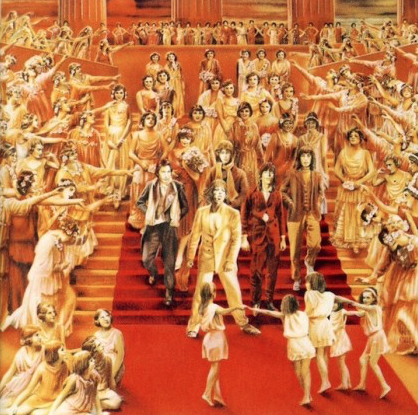 Jonathan Park, who was poached by the Stones after his peerless set design for Pink Floyd's The Wall tour, was one of the geniuses who helped the band create their legendary live shows. He expressed it was thrilling to have some of that behind-the-scenes craft showcased to the public. "It's wonderful to really be able to see all that hard work," he said. As we come to the end of the show, we are invited into a mocked-up backstage where you can hear music blasting in the next room. When it's our turn to walk through the stage doors—this compelling show ends with a 3D live performance Satisfaction. It's not just those leaving the rarified gallery who seem to have been affected by the first week of the Rolling Stone's new West London residency. Further up the road, a hipster in his late-20s was strolling in the spring sunshine with the exhibition T-shirt peeking out from beneath a long coat, and a teenager in a green duffle coat had sewn a Rolling Stones patch into his jeans. Something is stirring on the King's Road.