Interesting Facts about the History of Honey 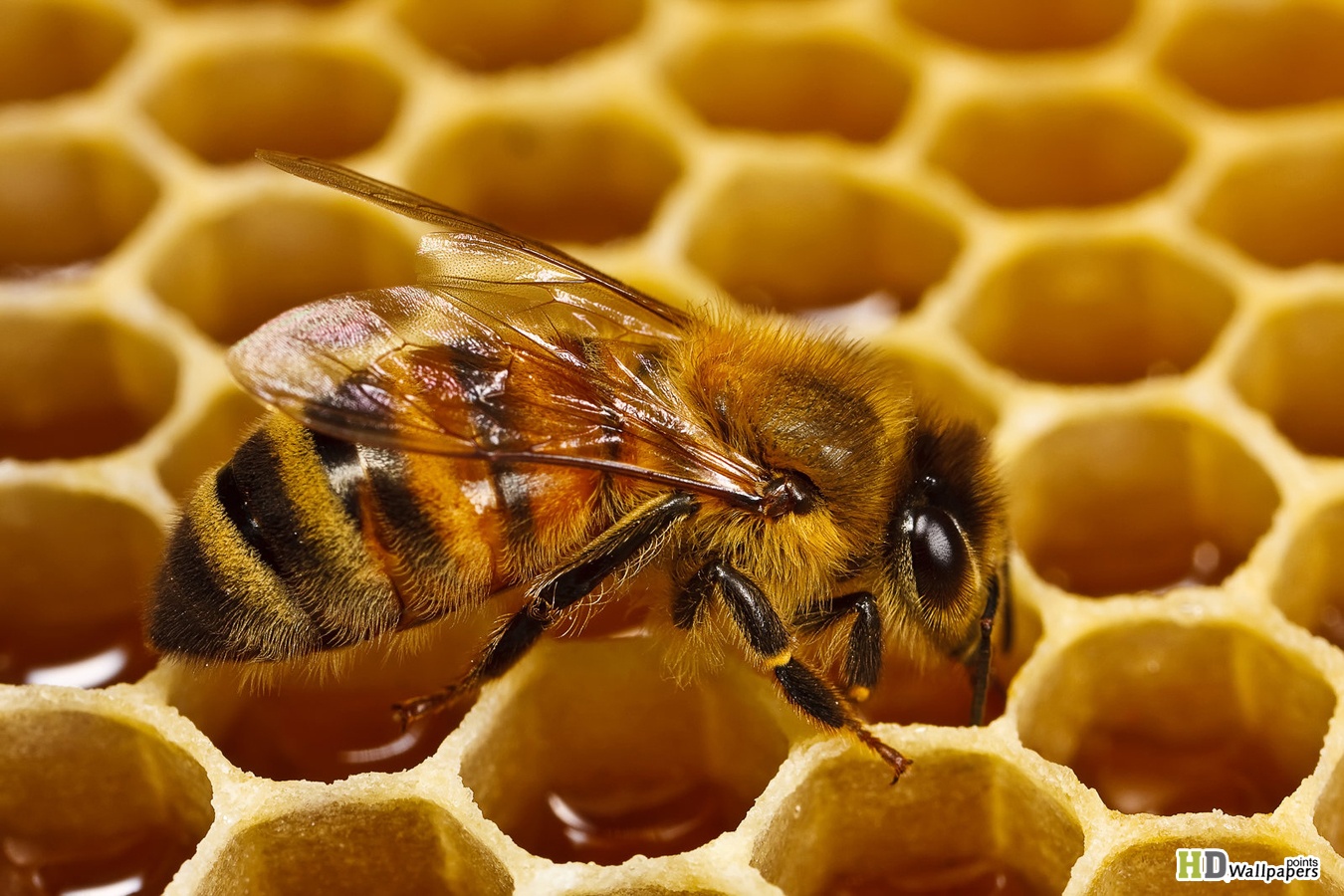 There's no denying that honey is a delicious, nutritious and versatile ingredient with very ancient origins. But do you know exactly who started consuming honey? And how about the fact that ancient Egyptians used to embalm bodies in honey?  Honey consumption has prehistoric roots, with man consuming this sweet delicacy from at least 8000 years ago. But as you spread it on your toast in the morning, do you ever think about how honey is created or what else it can be used for? It has already been uncovered its medical and beauty purposes, but here are more surprising facts about honey. 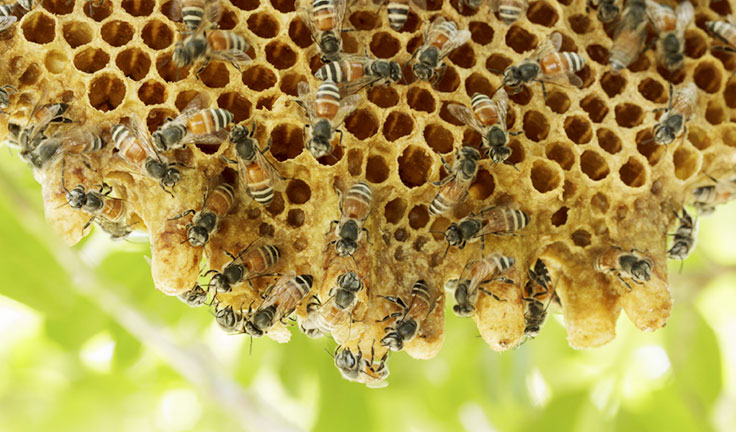 It takes about 60,000 bees, collectively traveling up to 55,000 miles and visiting more than 2 million flowers, to gather enough nectar to make one pound of honey. Once the nectar is gathered, the bee stores it in its extra stomach where it mixes with enzymes, and then passes it (via regurgitation) to another bee's mouth. This process is repeated until the nectar becomes partially digested and is then deposited into a honeycomb. The uses of honey in ayurvedic medicines dates back to almost 4000 years, as blended together in herbal preparation, it is believed to enhance the medicinal value of the herbs. Honey is used in ayurvedic preparations to improve eyesight, enhance weight loss and cure impotence. Honey also helps in treating urinary tract disorders, diarrhea, bronchial asthma and nausea. 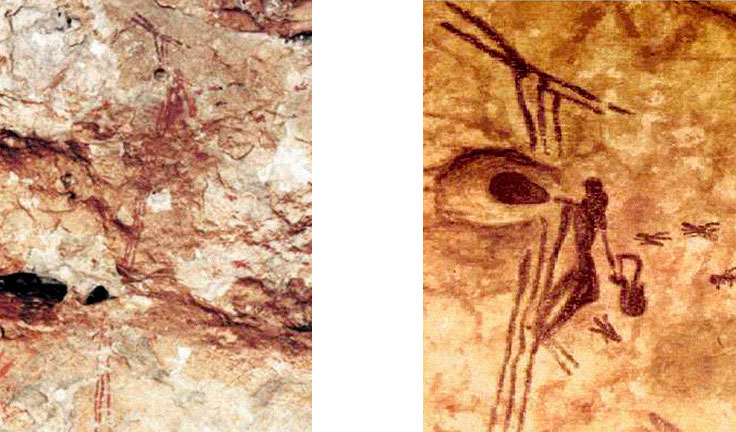 Humans apparently began hunting for honey at least 8,000 years ago, as evidenced by a cave painting in Valencia, Spain. Perhaps guided by the honeyguide bird which guides humans to wild bee hives almost certainly evolved with early hominids. So far, the oldest remains of honey have been found in Georgia in unearthed ancient tombs, dating back some 4,700–5,500 years. In ancient Egypt, honey was used to sweeten cakes and biscuits, and was used in many other dishes. 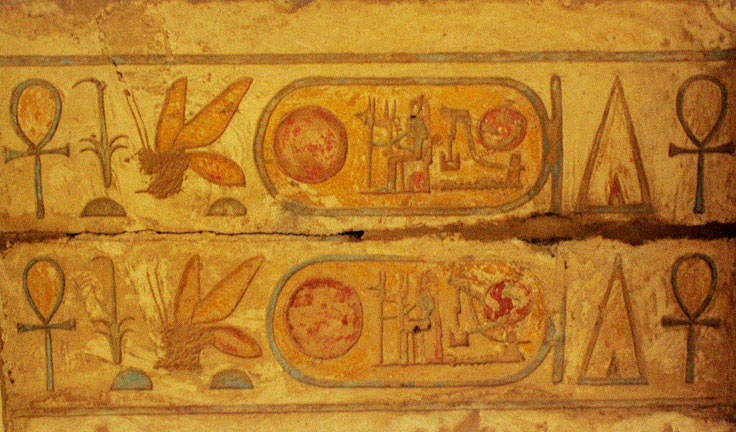 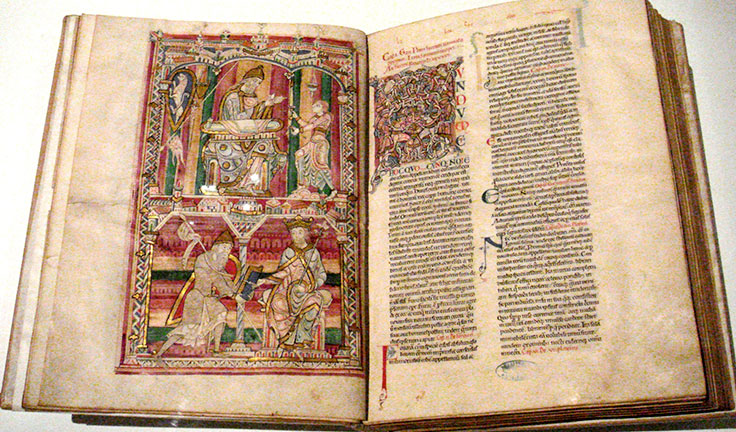 Pliny the Elder devotes considerable space in his book Naturalis Historia to the bee and honey, and its many uses. In the absence of sugar, honey was an integral sweetening ingredient in Roman recipes, and references to its use in food can be found in the work of many Roman authors, including Athenaeus, Cato, and Bassus. 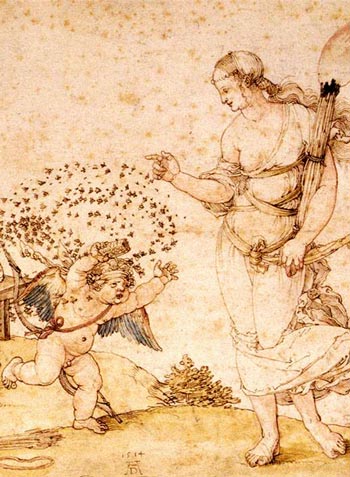 In ancient times, athletes used to consume honey to enhance the endurance level, reduce muscle fatigue and instantly boost the performance. Honey is also known to help in recovery and maintaining glycogen levels. As well as Europe, India and Egypt, the art of beekeeping in ancient China has existed since time immemorial, but also on the other side of the World, in ancient Mesoamerica, the Maya used honey from the stingless bee for culinary purposes. 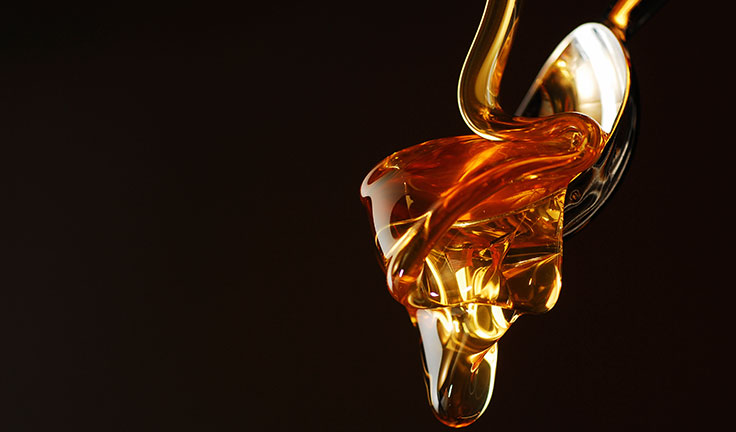 In Hinduism, honey (Madhu) is one of the five elixirs of immortality (Panchamrita). In Buddhism, honey plays an important role in the festival of Madhu Purnima, celebrated in India and Bangladesh. The day commemorates Buddha's making peace among his disciples by retreating into the wilderness. The legend has it that while he was there, a monkey brought him honey to eat. While in Jewish tradition, honey is a symbol for the New Year, Rosh Hashanah. At the traditional meal for that holiday, apple slices are dipped in honey and eaten to bring a sweet new year. 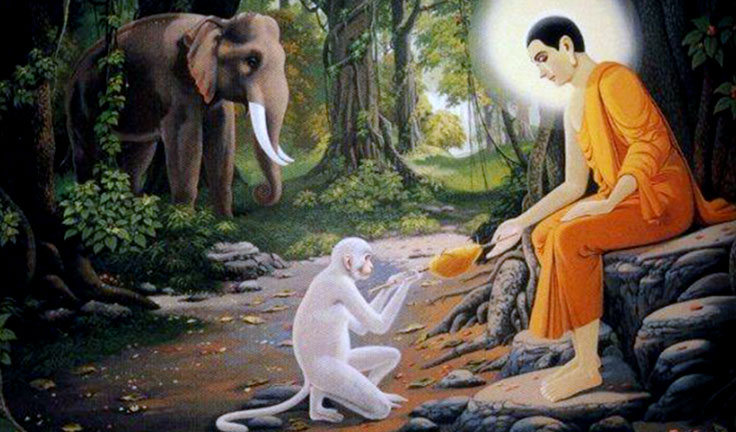 Scriptures from the main three monotheistic religions all mention bees and honey quite extensively. For example, in the Hebrew Bible, which contains many references to honey, the sweet nectar makes an appearance in the Book of Judges, Leviticus Proverbs and Book of Exodus. While in the Christian New Testament, Matthew 3:4, John the Baptist is said to have lived for a long period of time in the wilderness on a diet consisting of locusts and wild honey. In Islam, there is an entire chapter (Surah) in the Qur'an called an-Nahl (the Bee). According to his teachings (hadith), Muhammad strongly recommended honey for healing purposes. 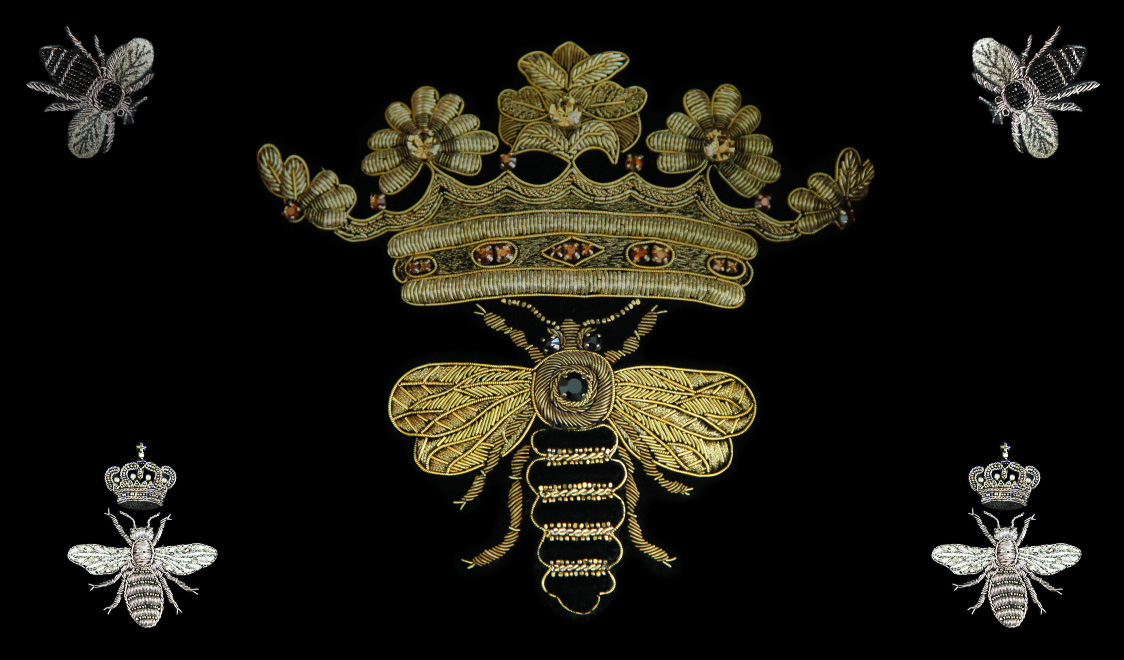 In the eyes of ancient peoples these small flying, extremely busy beings, devoted to their occupation were the messengers that connected men and the gods, the visible and the invisible with their flight. Moreover, in many Middle Eastern and Asian cultures, bees represented the human soul and its journey on earth. Associating the bee with light, the sun and gold, the people of antiquity often incorporated it into their myths and legends. The bee is an emblem of rebirth and the renewal of nature, it is associated with determination and will power as, in fact, given its scale, it should not be able to fly, its body being too large compared to the size of its wings. Myths, rites and legendary narratives, let's find out more about the many symbolic forms that this precious little animal has assumed over the centuries. 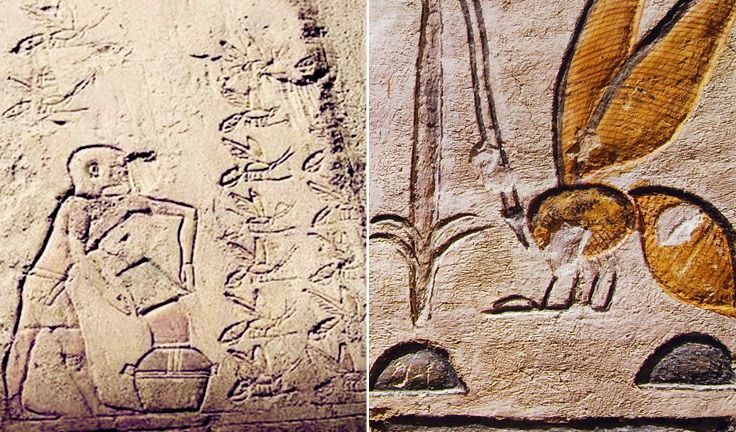 In ancient Egypt the bee was associated with the sun and belonged to the divine world of the after life because it was born from the tears of Ra, the sun god. Beeswax was considered sacred and candles made from it could only be used by priests. In addition, wax was also used for mummification (the term "mummy" comes from the Arabic "mum" or "moum" used to refer to the wax with which the Egyptians impregnated the bands for enveloping the bodies). Still in ancient Egypt, it was said the the bee, material embodiment of the soul, would bring the deceased back to life if it entered his/her mouth. The ancient Babylonians, on the other hand, worshipped the god Mithras, depicted as a lion with a bee in its mouth, the name of which was "dabar" also meaning "divine word". This same name was later to be used by the ancient Jews to invoke the Messiah. In Hebrew, the word "bee" comes from the word "dbure" which originates from "dbr" or "speech". Bees were in fact a symbol of intelligence, eloquence and the ability to use words well. 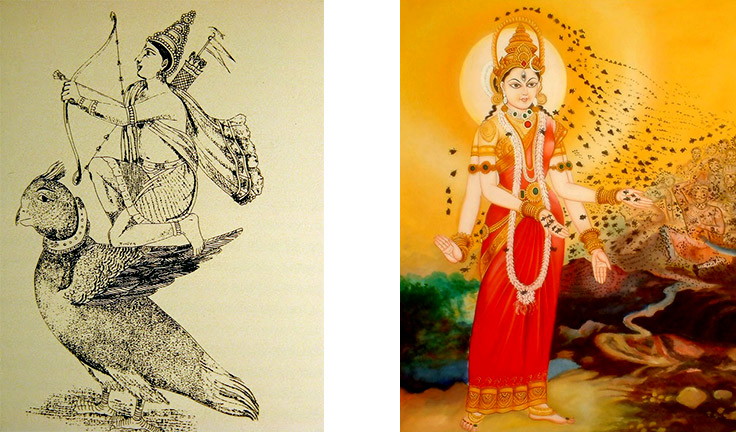 Indian culture places great value on forms of plant and animal life and, over the centuries, has created its many myths from the existence of these natural phenomena. In Hindu literature, for example, Kama, the god of love, manifests himself with a bowstring made of bees. In Indian art, the god Vishnu is portrayed as a bee resting on a lotus and Shiva as a bee over a triangle. The ancient Mediterranean goddesses of bees in Egypt, Mesopotamia and Greece are linked to the Indian goddess, Brahmari Devi, the goddess of bees, and her connection to the teachings inherent in the chakras, the seven centres of consciousness that, it is said, emanate the heartbeat of the goddess. The Great Mother (Maha Devi), the Kundalini, manifests herself in the form of the sound of the queen bee or surrounded by clouds of buzzing bees. 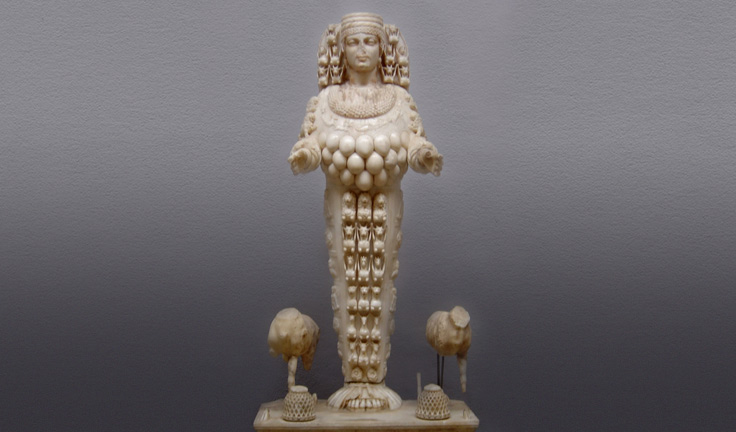 Statue of Artemis in the temple of Ephesus  Greek-Roman Mythology

Considered messengers of the muses for their sensitivity to sound, bees were also a symbol of obedience and respect for civil and political life, both among the Greeks and the Romans (the organisation of the hive was greatly admired, as is clear from the writings of Pliny the Elder and Cicero). In Greece there was a famous myth about the birth of Zeus: Zeus as a child, it is said, was hidden by his mother Rea in a cave on Mount Ida in Crete, to hide him it from his father Kronos who wanted to eat him, and there he was nurtured by a goat and some honey produced by bees. Hence, it is said, he gave the bees a colour reminiscent of the glow of gold. Probably the special attention given to bees is linked to the topic of bugonia or the belief in the spontaneous origin of life (for example, a swarm of insects that forms in the carcasses of sacrificed animals) and, hence, to the theme of eternal life and rebirth. Historically, bees are also linked to femininity, divine women and goddesses. The priestesses of Eleusis were called "bees", while the statue of Artemis in the temple of Ephesus showed the goddess surrounded by various animals, including bees. In Greece, sometimes connected with the myth of the birth of Zeus, there was the widespread worship of the goddess Melissa, half-bee, half-woman, called "virgin goddess" because she had the capacity for self-regeneration, just like bees that reproduce without union with the male. Her incessant creative activity was related to Demeter and her generative and regenerative powers. During the Thesmophoria of Syracuse – festivities dedicated to Demeter and her daughter, Persephone – myollì were prepared, bread with sesame and honey depicting female genitalia. The bee was also a symbol of courage and fortitude for its determination in defending itself and attacking aggressors. However, it was also a symbol of purity and Plutarch took the view that sex slaves should be stung by it. 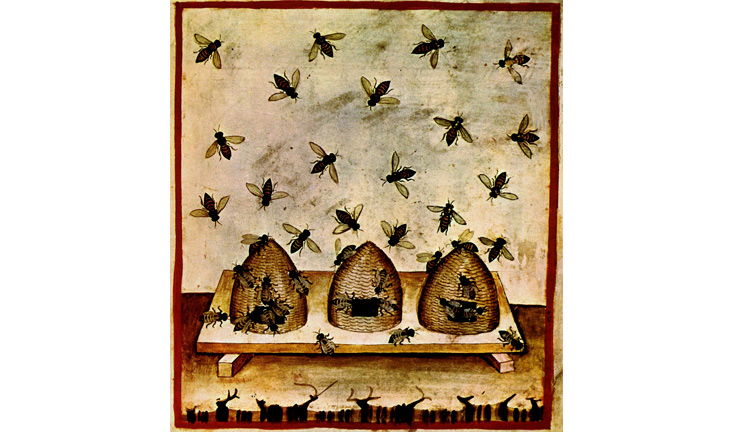 Even Christian iconography has greatly valued this insect, using it as symbol of Christ (honey as mercy and the sting as justice), while the hive has been used as a Christian metaphor for the chaste, protected life (based on the model of monastic communities). The mistaken belief that bees reproduce constantly like the flowers they pollinate also made them a symbol of the Virgin Mary. St. Francis de Sales and St. Bernard likened the soul of man to a bee (perhaps for the restlessness portrayed by the flight of the animal), while Dante and St. John Chrysostom did the same with the souls of the blessed and angels (for its service role and proximity to the sky). However, bees were not only positive symbols, as in the Old Testament, in fact, bees were viewed as annoying insects similar to flies and the Lord announced an invasion of them, heralding a military invasion by the Assyrians (Isaiah). The Psalms, on the other hand, emphasise their ambivalence as being producers of honey but also armed with a sting. 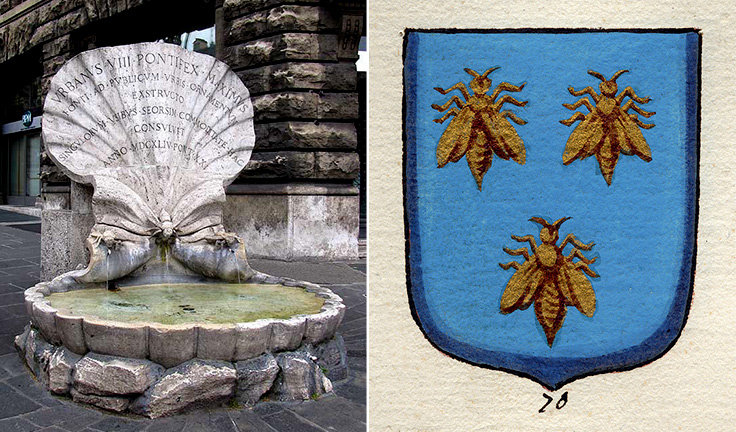 Peoples of the North and Heraldic Symbols

For the Gauls and Celts the bee symbolised the survival of the soul after death (probably related to the fact that in winter bees gather in the hive and then come out in the spring). According to Nordic legends bees emerged on the earth from an enchanted, subterranean world, where they lived together with fairies. It was believed that they possessed prophetic virtues, thus, by watching the flight, the future could be predicted. 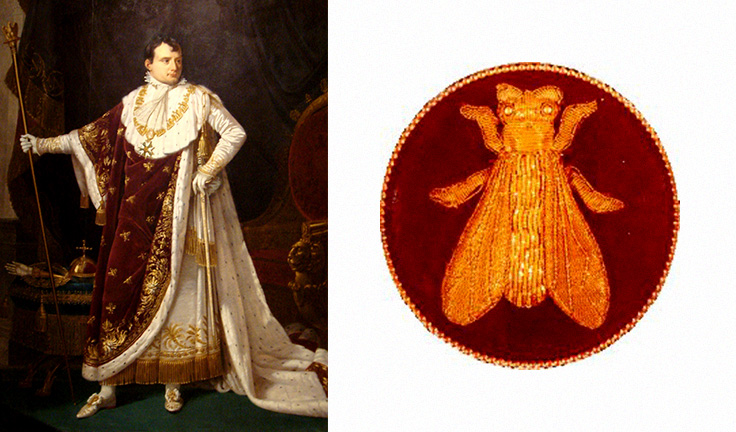 The bee is also a recurring symbol in heraldry, where, over the centuries, it has represented industriousness, work and temperance. In particular, the bee was the emblem of the Abbey of Notre Dame de Melleray and the emblem of the Barberini family (three bees on a blue background), reproduced in the famous Bernini fountain in Rome, sculpted at the request of Pope Urban VIII and today located on the corner of Piazza Barberini and Via Veneto. The bees of Napoleon are also famous; they adorned the imperial cloak as a symbol of immortality and political continuity (golden bees were also found on some flags of the Empire, such as the flag of the Island of Elba).