Signs of Liquid Water Found on the Surface of Mars 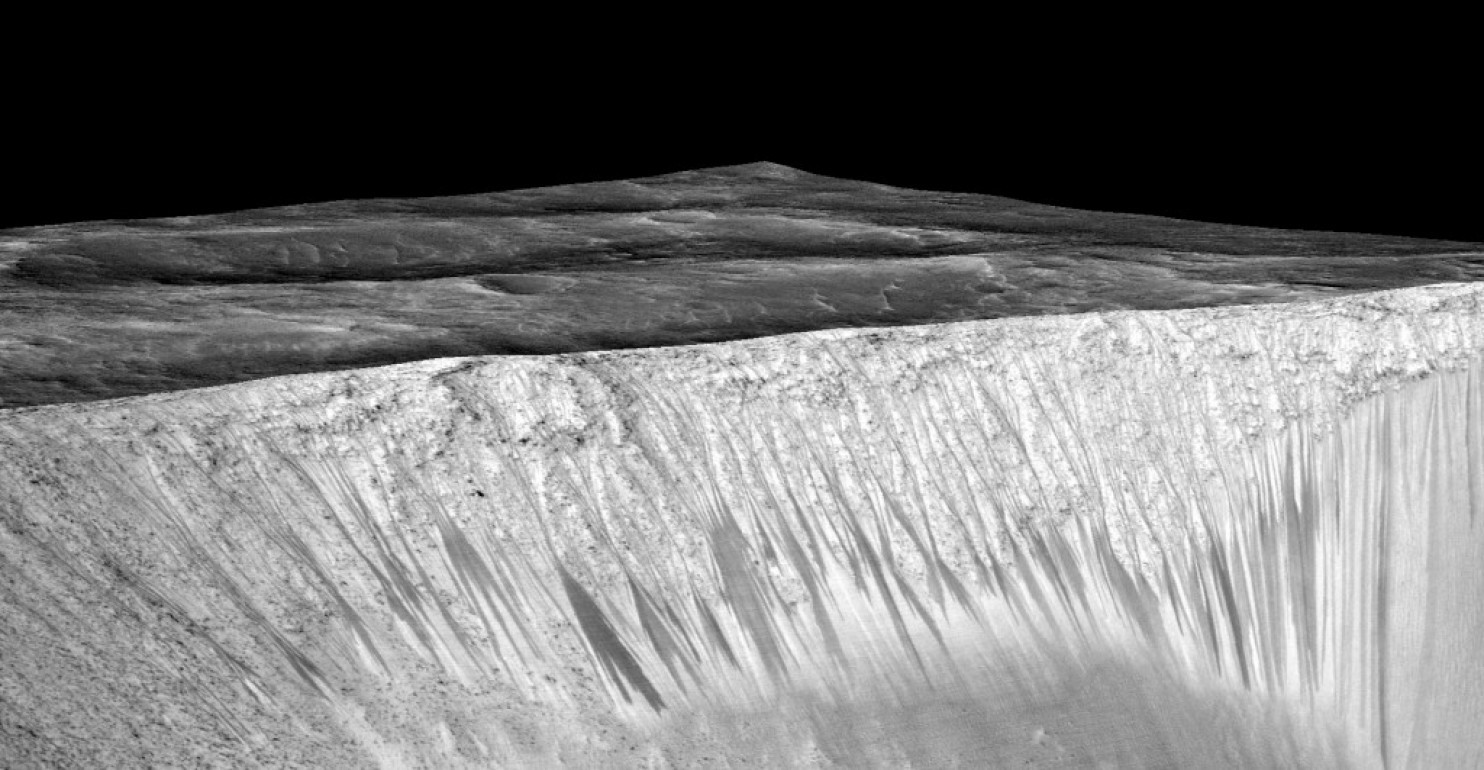 It is not a simple proposition, because the temperatures are usually well below zero Celsius and the atmospheric pressure is so low that any liquid H2O will rapidly boil. But the observation over the past 15 years of gullies and surface streaks that appear to change with the seasons has heightened the speculation. 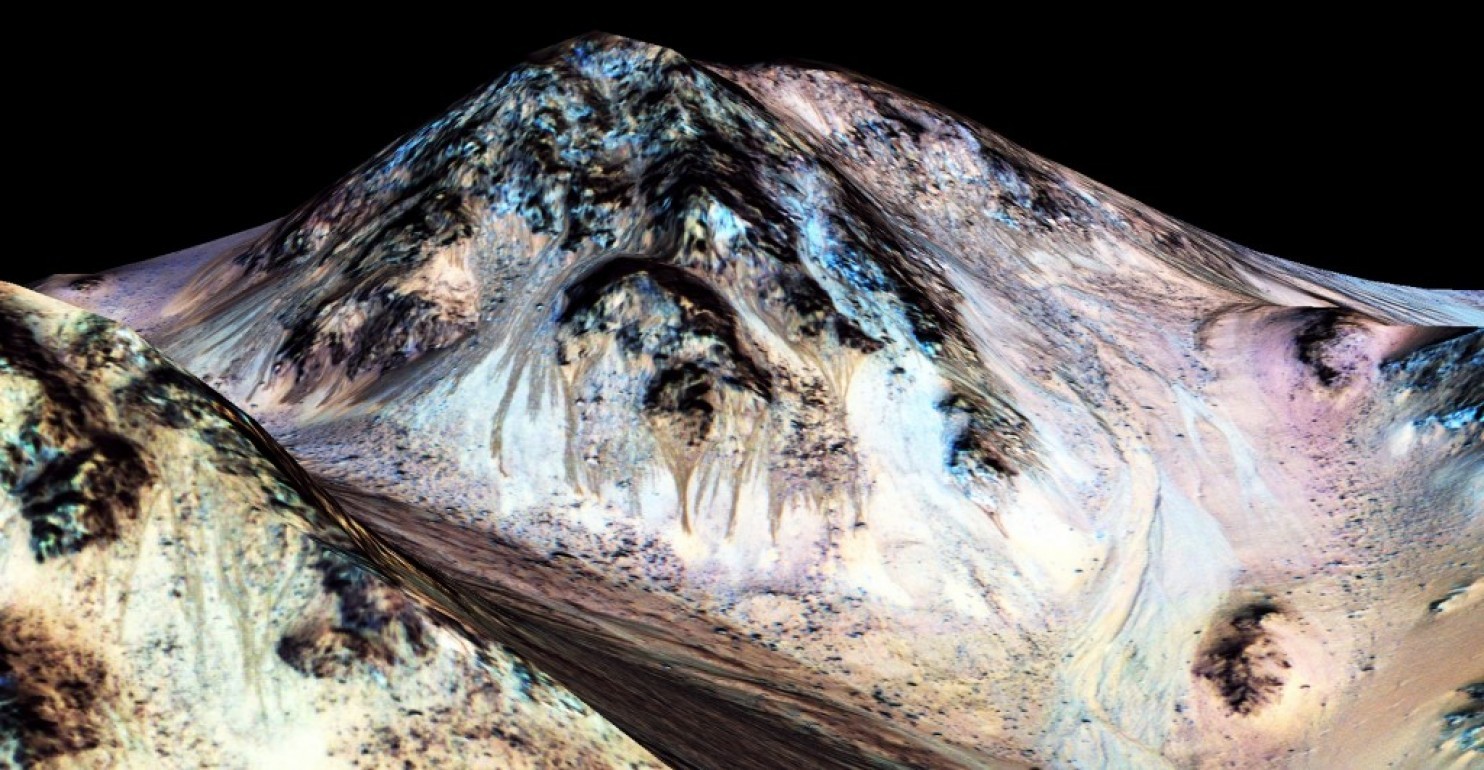 New data from the US space agency's Mars Reconnaissance Orbiter that seems to solve the conundrum. MRO has an instrument called Crism that can determine the chemistry of surface materials. It has looked at four locations where dark streaks are seen to come and go during Martian summer months. Crism finds these "recurring slope lineae" (RSL) to be covered with salts. They are salts - magnesium perchlorate, chlorate and chloride - that can drop the freezing point of water by 80 degrees and its vaporisation rate by a factor of 10. The combination allows briney water to stay stable long enough to trickle down hillsides and crater walls. Quite where the water is coming from to make the streaks is still unclear, however. The locations studied by MRO are equatorial, and any stored water in this region of Mars, perhaps in the form of ice, is thought to exist only at great depth. One possibility is that the salts actually pull the water out of the atmosphere. The Curiosity rover has found some strong pointers to this mechanism. But again, it is not known whether there is a sufficient supply in the air to facilitate a decent flow. 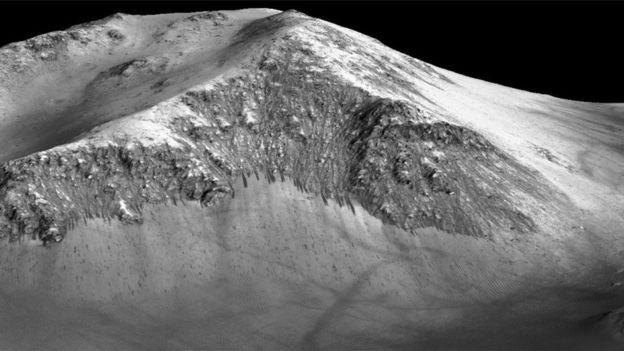 Any mission to such locations would have to guarantee no Earthly contamination.  Dr Joe Michalski is a Mars researcher at the Natural History Museum in London. He called the announcement an exciting development, especially because of its implications for the potential of microbes existing on the planet today. "We know from the study of extremophiles on Earth that life can not only survive, but thrive in conditions that are hyper-arid, very saline or otherwise 'extreme' in comparison to what is habitable to a human. In fact, on Earth, wherever we find water, we find life. That is why the discovery of water on Mars over the last 20 years is so exciting." An interesting consequence of the findings is that space agencies will now have some extra thinking to do about where they send future landers and rovers. Current internationally-agreed rules state that missions should be wary of going to places on Mars where there is likely to be liquid water. A UK space agency expert on Mars landing sites, Dr Peter Grindrod, told BBC News: "Planetary protection states that we can't go anywhere there is liquid water because we can't sterilise our spacecraft well enough to guarantee we won't contaminate these locations. So if an RSL is found within the landing zone of a probe, then you can't land there. That would be kind of ironic for Europe's forthcoming ExoMars rover because it's designed to look for life." 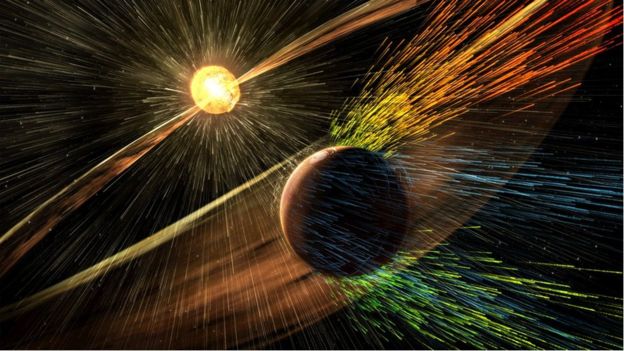 Artist's Impression of Mars and the SunImage

Scientists think they are getting closer to explaining precisely how Mars lost much of its atmosphere. Researchers working on the US space agency's Maven satellite have reported their first big set of results in a clutch of scholarly papers. 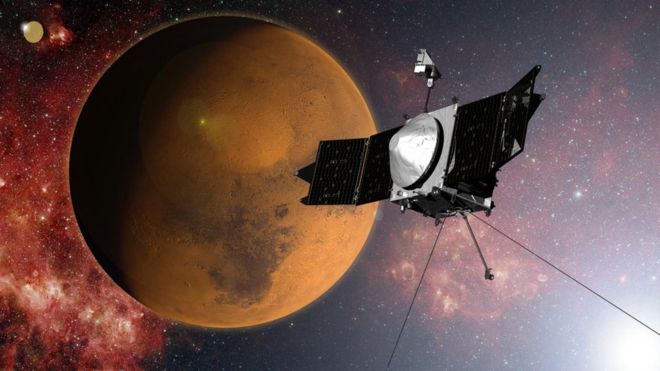 The Mars Atmosphere and Volatile EvolutioN (Maven) spacecraft arrived in 2014

These detail how Martian air today is being removed at high altitudes through its interactions with the Sun.They calculate the rates at which gases escape, and suggest why these rates may have been even higher in the past.

"We're well on the way to answering many of our questions; much further along actually than I thought we would be at this stage," said Bruce Jakosky, the principal investigator on Nasa's Maven spacecraft. "What we're reporting today is data from just the first 6-7 months from our primary mission. "We're still analysing this data, and we have already been approved for a mission extension that will allow us to round out one full Martian year and to see the response of the system to all the seasons on Mars."  The papers are published in Science Magazine and Geophysical Research Letters. 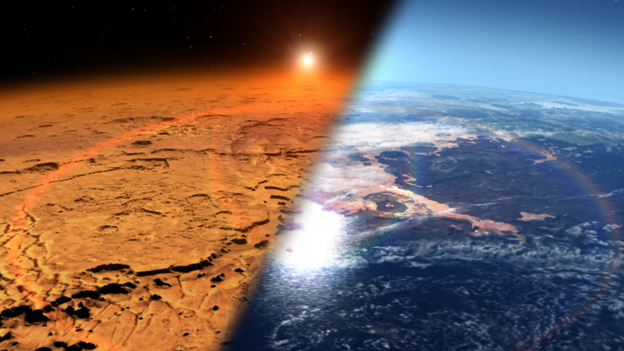 The Dry and Wet Surface of Mars

All the observations by previous satellites and landers at the Red Planet indicate that it was once shrouded in a thick blanket of gases, which supported the presence of liquid water at its surface. This is evident in the many landscape features that resemble the remains of river channels, deltas and lakes. But the air pressure on Mars today is less than 1% of what it is on Earth, meaning any free water would instantly boil away or freeze solid. 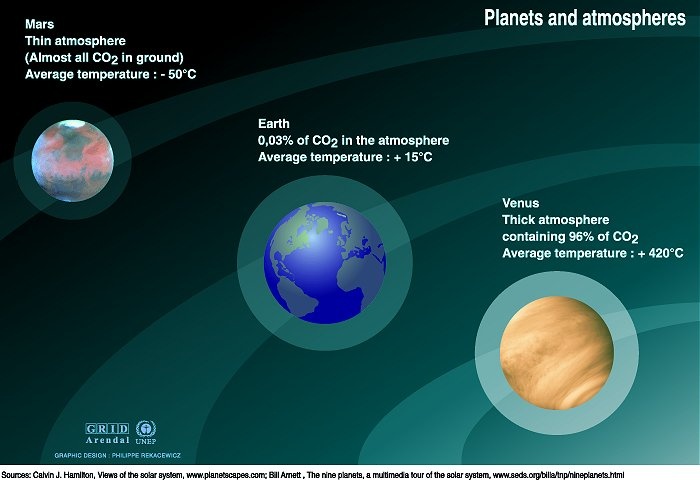 Some of the air has probably reacted with, and been incorporated into, minerals at the surface. However, the most likely explanation for the atmosphere's loss - and the one that Maven began testing last year - is that the Sun has simply stripped it away, turning Mars from a warm and wet world into a cold and dry one.

a lot of Water Moving Across its Surface

When and how did Mars become the dry, cold world we know today? The satellite has been making a series of deep dives into the atmosphere as it orbits the planet. These dips take it to under 200km from the surface - enabling it to sample the gases that are present and to record how they are behaving when excited by our star. The Sun emits a constant stream of charged particles called the solar wind. This wind carries magnetic fields and when these hit the planet they generate electric fields that are then able to accelerate atmospheric ions, hurling them either directly off into space or slamming them into other atmospheric constituents so that they are removed. 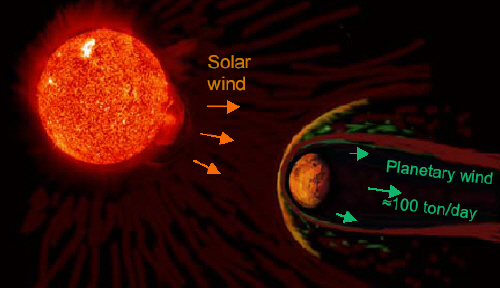 The loss rates may appear on the face of it to be quite small, but they are significant when applied over the 4.5 billion years of Mars' history. Maven scientist Jasper Halekas from the University of Iowa explained: "We find that there are roughly 100 grams of atmosphere escaping every second, a quarter pound escaping every second. "I can't help but imagine hamburgers flying out of the Martian atmosphere - one per second. But fortunately it's instead oxygen and carbon dioxide that are leaving the planet which are important both for water and for the climate of the planet overall." The Maven team also got to observe the impact of a coronal mass ejection at Mars in March this year. A CME is a huge bubble of excited gas that occasionally billows away from the Sun. A CME will move faster than the solar wind and carry even more energy. When this bubble struck the atmosphere, Maven saw escape rates spike 10 to 20 times higher, at least. "Solar storms were more common and more intense earlier in Solar System history, so long ago we expect escape to have been happening all the time and stripping away lots of atmosphere from the planet," said Dr Halekas. 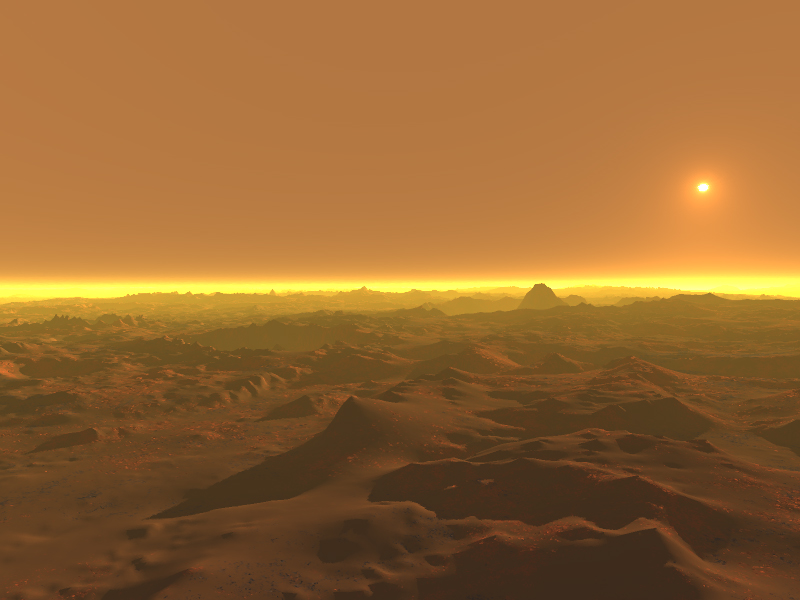 "This implies that not only is Mars' atmosphere escaping today and has been escaping over time, but much of that atmosphere may have been lost early on." Had Mars retained a global magnetic field, it might have been able to deflect and resist this persistent, abrasive assault from our star. Scientists think however that the internal dynamo generating such a field probably collapsed just a few hundred million years after the planet formed. Thankfully for Earth, its global magnetic field continues to operate and afford protection. Otherwise, our climate system could have been altered in a very similar way.