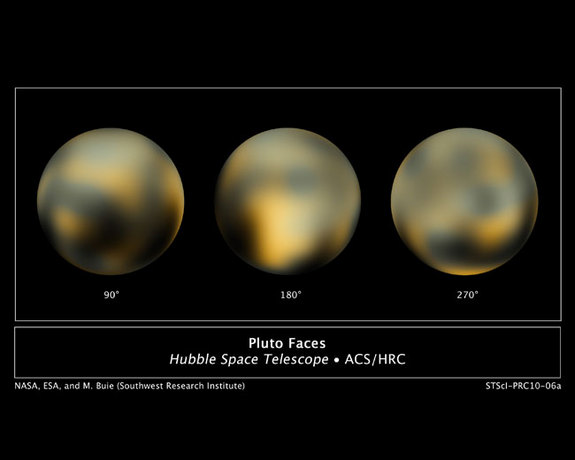 After a decade-long journey through our solar system, New Horizons made its closest approach to Pluto Tuesday, July 14, 2015, about 7,750 miles above the surface -- roughly the same distance from New York to Mumbai, India - making it the first-ever space mission to explore a world so far from Earth. 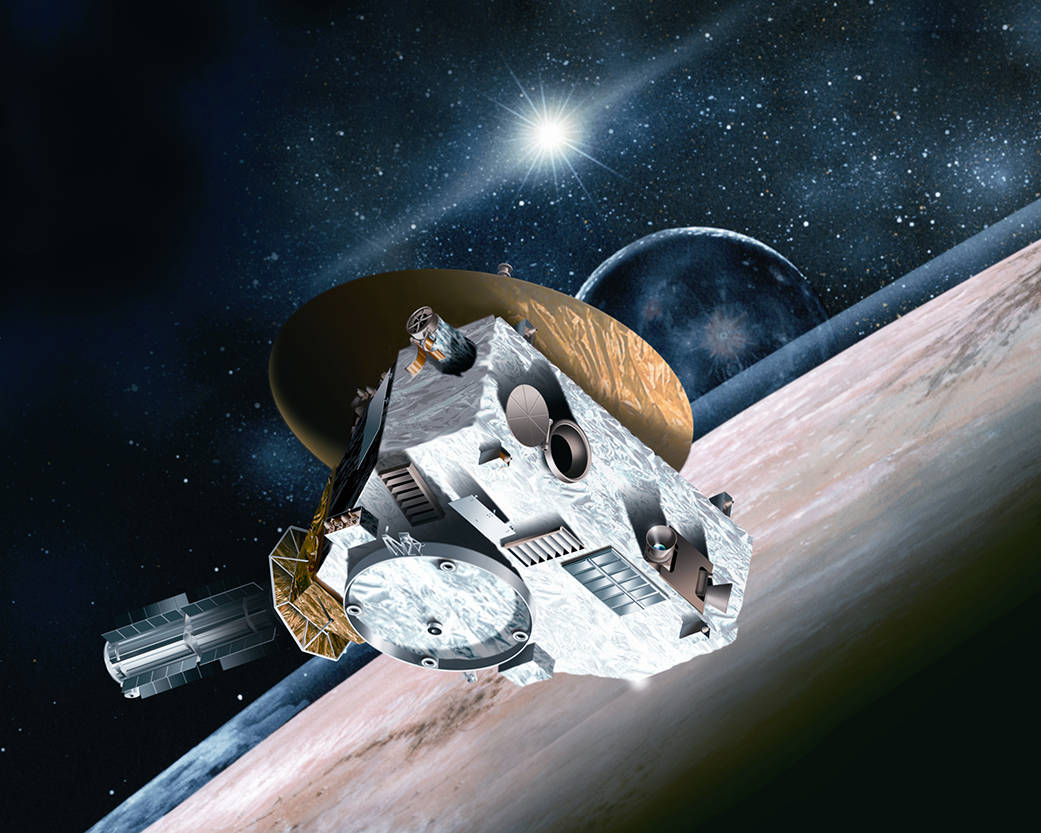 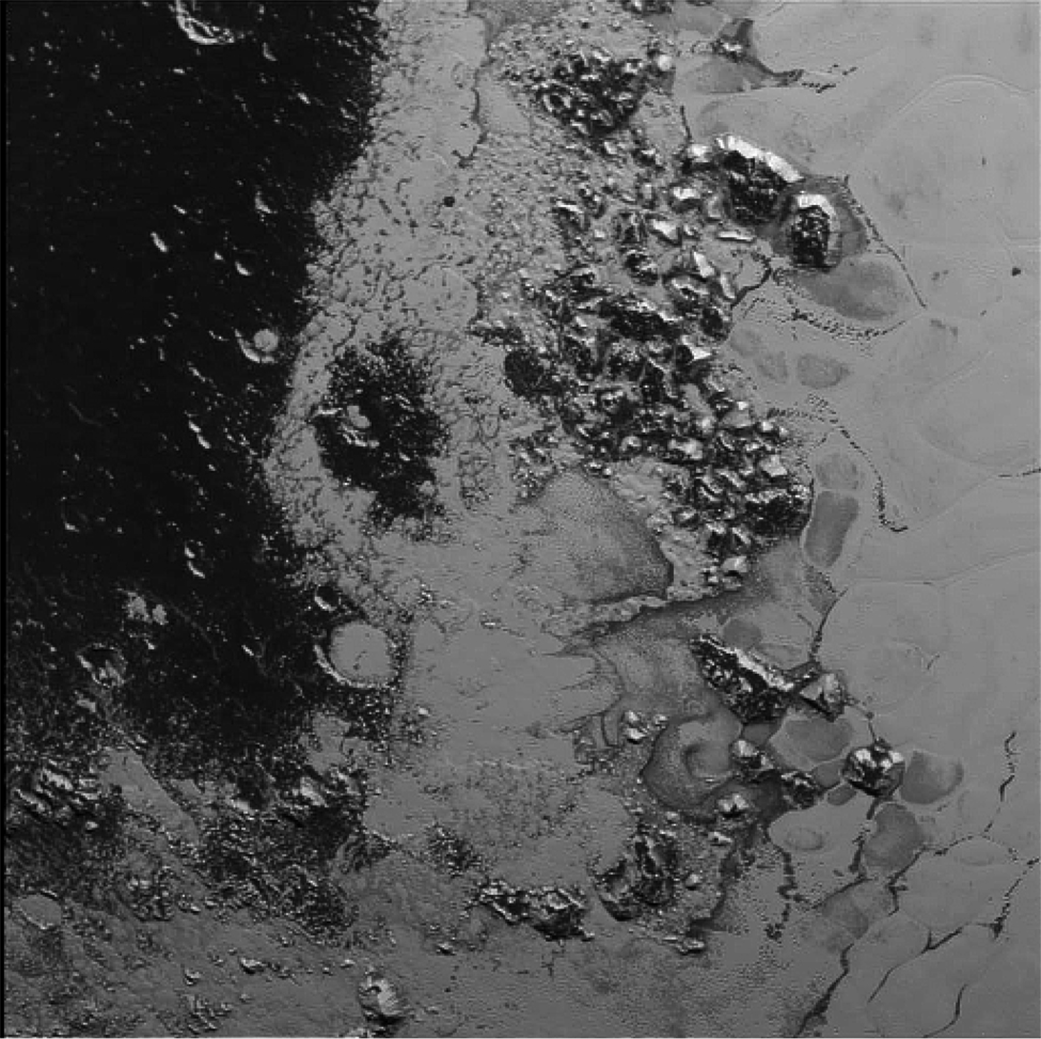 As data trickles back at kilobytes per second from NASA's New Horizons mission—now speeding deeper into poorly known interplanetary territory—more of Pluto's strange and fascinating surface features are revealing themselves. This latest image, taken at distance of 48,000 miles on July 14, 2015  shows a segment of Pluto from the lower left edge of the now famous 'heart' region, or Tombaugh Regio. Features as small as half a mile across are visible. Here there are more of the odd-looking 'barnacle' mountains (my term, not an official label), thought to perhaps be protrusions of water-ice, which is rock-hard at Pluto's surface temperature of around minus 230 Celsius. This particular range rises perhaps between a half-mile and a mile above the flatter plains. But perhaps the most sriking feature of this region is the transition between the lighter, more reflective, flat area to the right and the darker, more heavily cratered zone to the left. What, why and how are questions to which no one has a definitive answer at this time.

Zoom in on Edge of Light/Dark Regions. Note that Some Craters Appear Filled-In with Light Deposits, but not all - Lowermost Crater Pair in Particular - Perhaps a Sign of Crater Age?

The lighter colored icy plains, extending up and across the center of Tombaugh regio are thought to be not much more than 100 million years old—based on the absence of cratering—making them positively youthful on planetary timescales. Is their formation a product of internal processes, or due to repeated cycles of sublimation and condensation of compounds like nitrogen, methane, carbon monoxide and more, as Pluto tracks through its 248 Earth-year orbital seasons? Perhaps the likeliest mechanism is some combination of all of the above. Peering at the details it's also apparent than several of the craters to the left of this image are partly 'filled in' by the lighter material. The image at left zooms in on some of them. The interesting thing is that there appears to be variation in the fill-in, perhaps a result of the process, or perhaps a sign of different crater ages. Have younger craters not yet got a layer of lighter ices deposited from a changing atmosphere?

At this point it's safe to say that Pluto has exceeded all expectations when it comes to surprises, and is likely to keep on serving up more of the same. 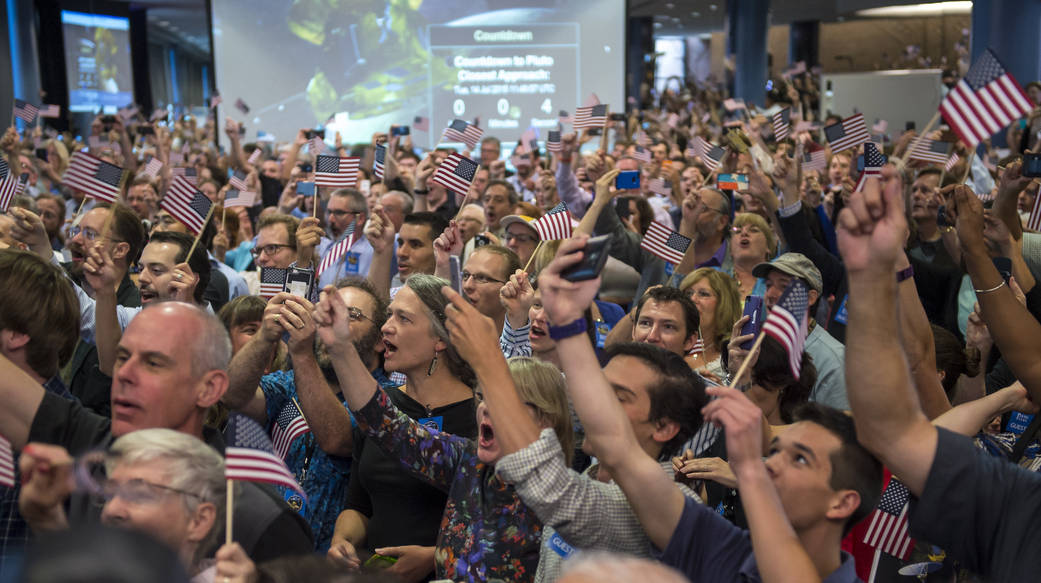 "New Horizons is the latest in a long line of scientific accomplishments at NASA, including multiple missions orbiting and exploring the surface of Mars in advance of human visits still to come; the remarkable Kepler mission to identify Earth-like planets around stars other than our own; and the DSCOVR satellite that soon will be beaming back images of the whole Earth in near real-time from a vantage point a million miles away. As New Horizons completes its flyby of Pluto and continues deeper into the Kuiper Belt, NASA's multifaceted journey of discovery continues." 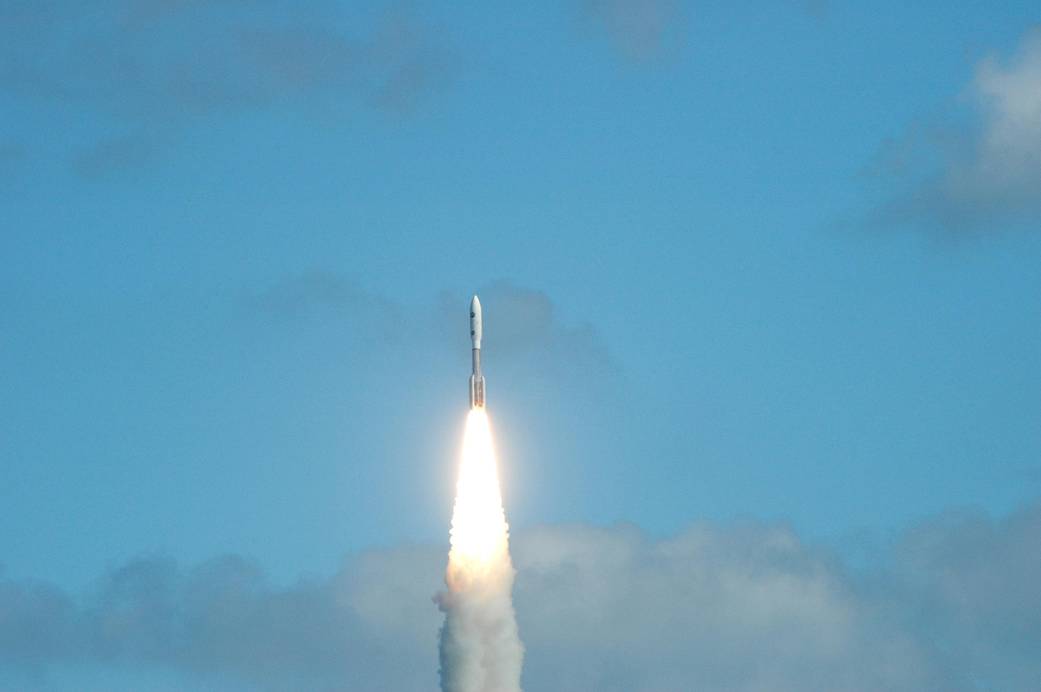 "The exploration of Pluto and its moons by New Horizons represents the capstone event to 50 years of planetary exploration by NASA and the United States," said NASA Administrator Charles Bolden. "Once again we have achieved a historic first. The United States is the first nation to reach Pluto, and with this mission has completed the initial survey of our solar system, a remarkable accomplishment that no other nation can match."

Per the plan, the spacecraft currently is in data-gathering mode and not in contact with flight controllers at the Johns Hopkins University Applied Physical Laboratory (APL) in Laurel, Maryland. Scientists are waiting to find out whether New Horizons "phones home," transmitting to Earth a series of status updates that indicate the spacecraft survived the flyby and is in good health. The Pluto story began only a generation ago when young Clyde Tombaugh was tasked to look for Planet X, theorized to exist beyond the orbit of Neptune. He discovered a faint point of light that we now see as a complex and fascinating world. 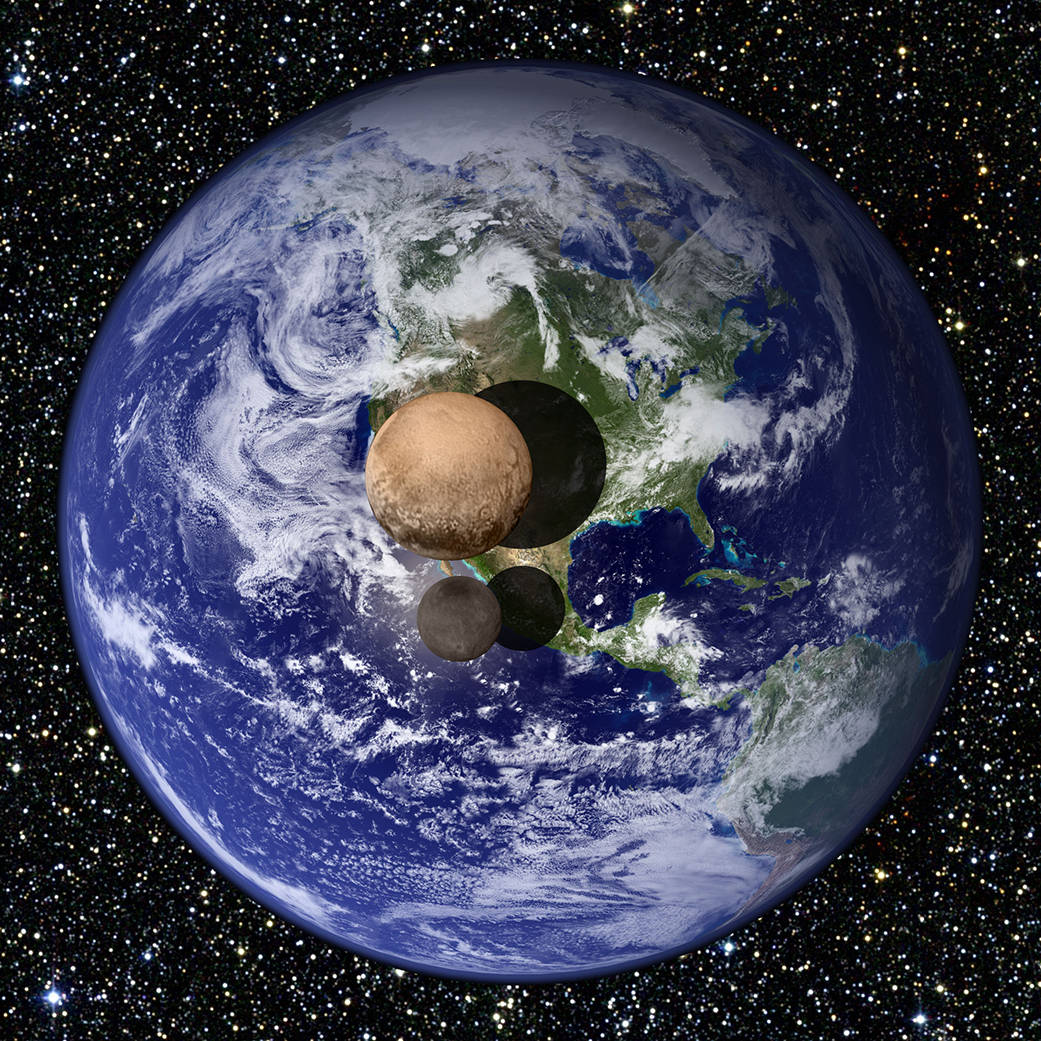 Pluto's Size as Compared to the Earth

"Pluto was discovered just 85 years ago by a farmer's son from Kansas, inspired by a visionary from Boston, using a telescope in Flagstaff, Arizona," said John Grunsfeld, associate administrator for NASA's Science Mission Directorate in Washington. "Today, science takes a great leap observing the Pluto system up close and flying into a new frontier that will help us better understand the origins of the solar system."

New Horizons' flyby of the dwarf planet and its five known moons is providing an up-close introduction to the solar system's Kuiper Belt, an outer region populated by icy objects ranging in size from boulders to dwarf planets. Kuiper Belt objects, such as Pluto, preserve evidence about the early formation of the solar system. New Horizons principal investigator Alan Stern of the Southwest Research Institute (SwRI) in Boulder, Colorado, says the mission now is writing the textbook on Pluto. 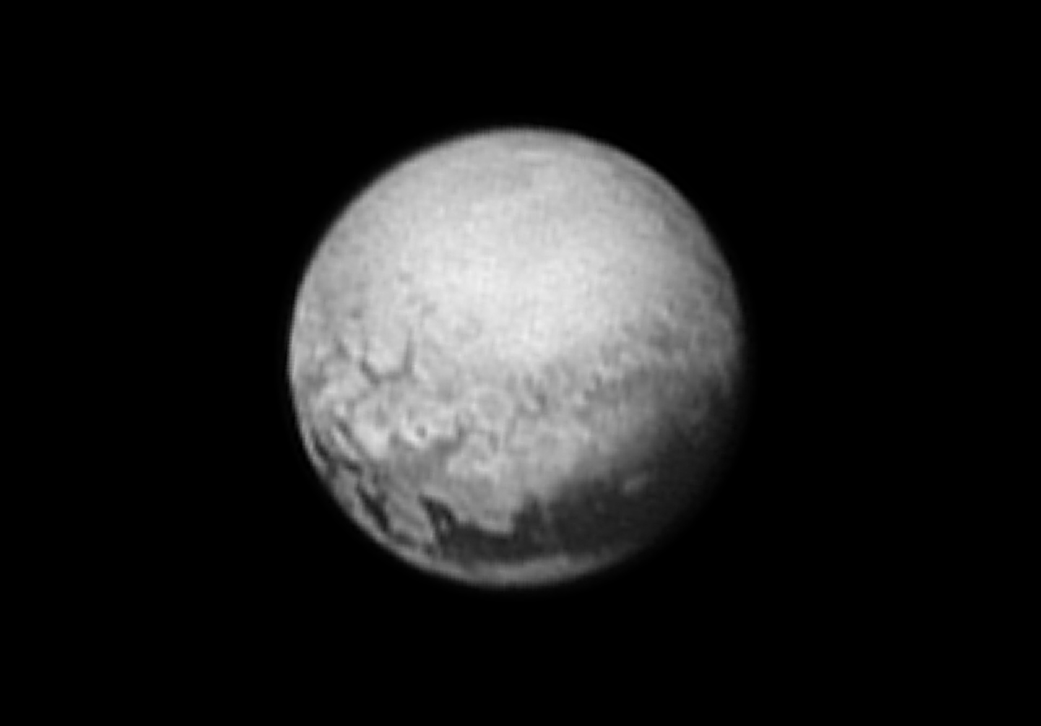 "The New Horizons team is proud to have accomplished the first exploration of the Pluto system," Stern said. "This mission has inspired people across the world with the excitement of exploration and what humankind can achieve."New Horizons' almost 10-year, three-billion-mile journey to closest approach at Pluto took about one minute less than predicted when the craft was launched in January 2006. The spacecraft threaded the needle through a 36-by-57 mile (60 by 90 kilometers) window in space -- the equivalent of a commercial airliner arriving no more off target than the width of a tennis ball. Because New Horizons is the fastest spacecraft ever launched - hurtling through the Pluto system at more than 30,000 mph, a collision with a particle as small as a grain of rice could incapacitate the spacecraft. Once it reestablishes contact Tuesday night, it will take 16 months for New Horizons to send its cache of data - 10 years' worth -- back to Earth. 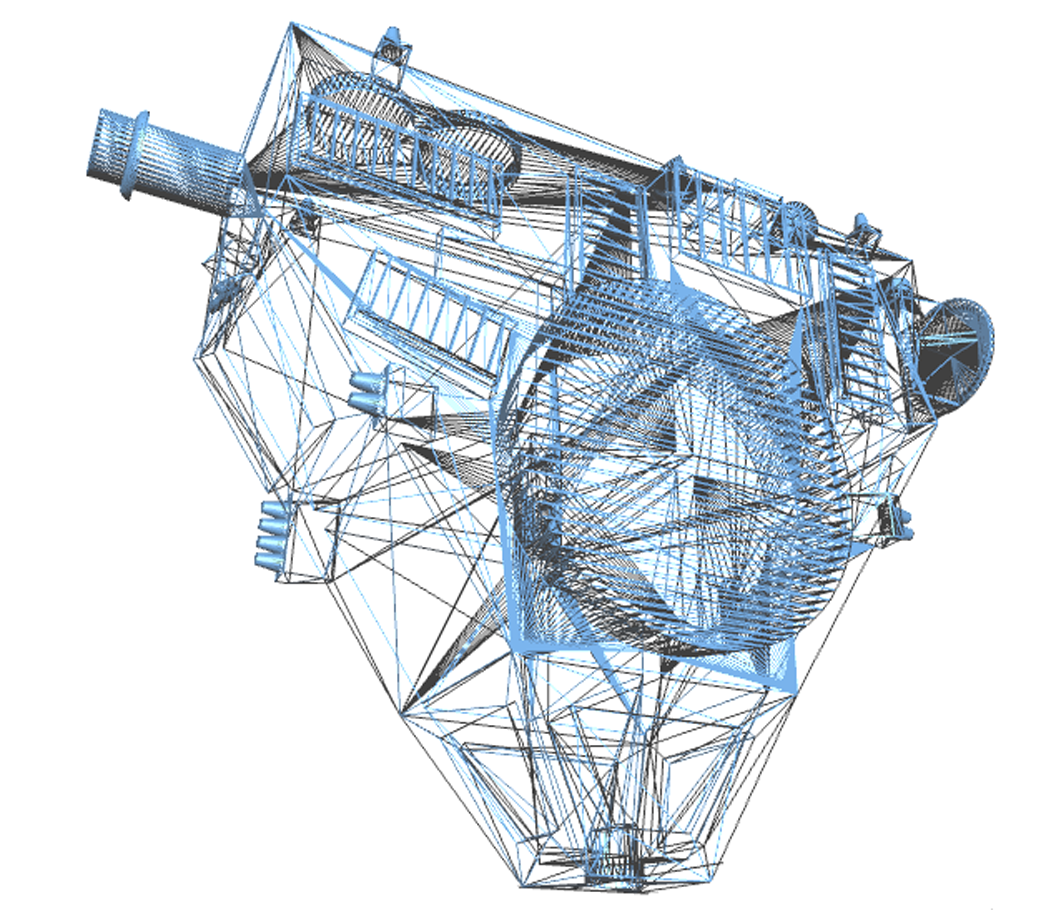 New Horizons is the latest in a long line of scientific accomplishments at NASA, including multiple rovers exploring the surface of Mars, the Cassini spacecraft that has revolutionized our understanding of Saturn and the Hubble Space Telescope, which recently celebrated its 25th anniversary. All of this scientific research and discovery is helping to inform the agency's plan to send American astronauts to Mars in the 2030's. 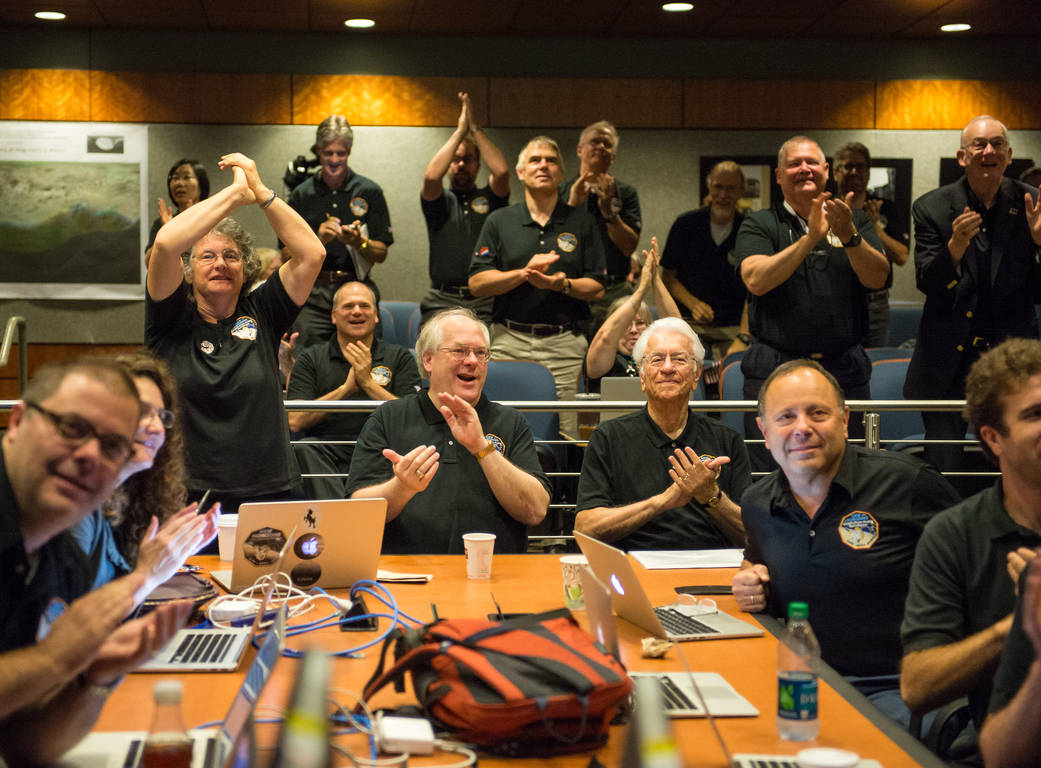 "After nearly 15 years of planning, building, and flying the New Horizons spacecraft across the solar system, we've reached our goal," said project manager Glen Fountain at APL "The bounty of what we've collected is about to unfold."