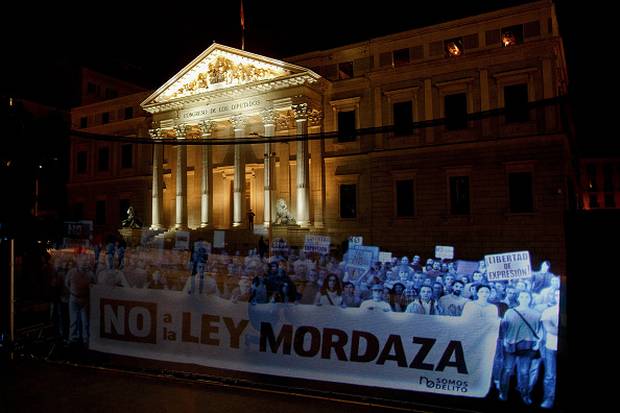 Organized by the group Holograms for Freedom, ghost-like figures holding placards took aim at the imminent draconian measures, arguing that holographic people are now afforded greater freedoms than their real-life counterparts. The "NoSomosDelito" (meaning: "We are Not Crime") movement - composed of more than 100 different organizations - called upon sympathisers around the world to participate in the landmark even by simply webcamming their face via the campaign website. More than 2,000 virtual images were sent and used in the hour-long hologram demonstration, Spain's largest newspaper "El Pais" reported. 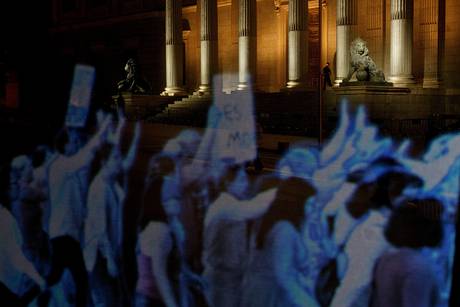 Under the Citizens Safety Law, it is illegal to gather in front of government buildings without permission from authorities; this includes everything from universities to hospitals. Organizers of unauthorised demonstrations could be fined up to €600,000, with further €600 fines for disrespecting police officers, and €30,000 for filming or photographing them. In a video promoting the protest, a spokeswoman said: "With the passing of the Gag Law, you won't be allowed to assemble in public spaces without risking a fine. 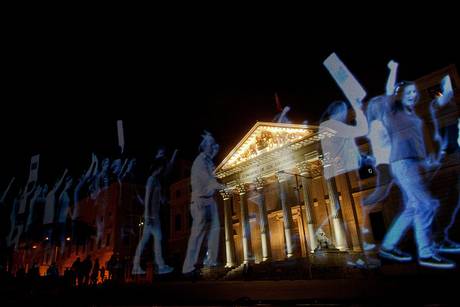 "Ultimately, if you are a person, you won't be allowed to express yourself freely. You will only be able to do it if you are a hologram." Spokesman Carlos Escano told Spanish newspaper El Mundo: "Our protest with holograms is ironic. "With the restrictions we're suffering on our freedoms of association and peaceful assembly, the last options that will be left to use in the end will be to protest through our holograms."