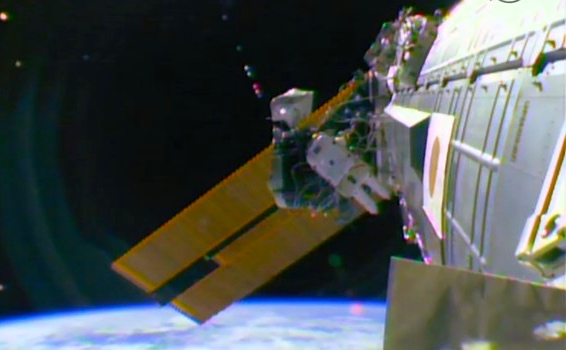 Wilmore and Virts first removed a thermal cover from the former shuttle docking module in preparation for the June arrival of the first of two new International Docking Adapters (IDA). IDA-1 will be attached to the older docking module also known as Pressurized Mating Adapter 2 during a spacewalk in July. Both IDA's are due to launch from Cape Canaveral a top separate SpaceX Falcon 9 rockets tucked inside the Dragon 7 supply craft. "Boeing built the two new docking adapters... Boeing's Crew Space Transportation-100 and SpaceX's Crew Dragon will use the adapters to deliver astronauts to the space station later this decade," NASA spokesperson Mark Garcia stated during today's spacewalk. 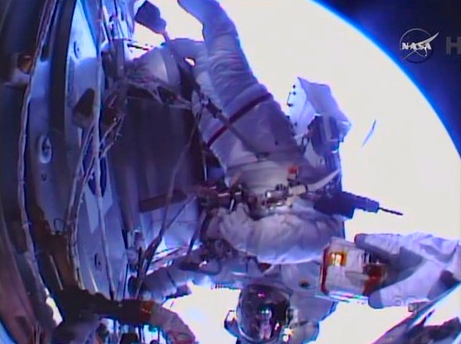 IDA-2 will launch two months later and then installed to PMA-3. The PMA-3 will first be moved from its current location and over to the space-facing side of the American Harmony module this summer. NASA confirmed this week, "SpaceX is targeting its new Crew Dragon spacecraft to make an uncrewed flight test in late 2016 and a crewed flight test in early 2017." 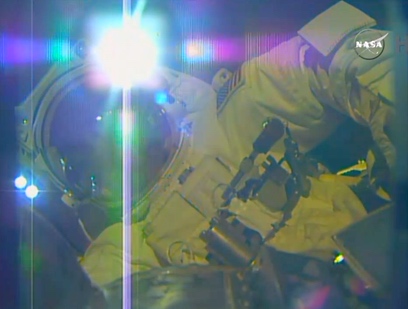 Virts stood on a special platform on the station's truss as he placed a special lubricate on the ball screws and bearings near the snares on the hand section of the Canadian-built arm. As Virts worked outside, station crew mate and Italian astronaut Samantha Cristoforetti worked from inside the Cupola module slowly moving the robotic arm and its wrist joint into position for Virts. "We were the cable guys, and now we're the Grease Monkeys," Wilmore commented as the spacewalk wrapped up.

The same two astronauts will step outside for a third time on Sunday to complete several more tasks in anticipation of the new docking adapters. NASA TV will provide live coverage of the orbital walk beginning at 6:00 a.m. 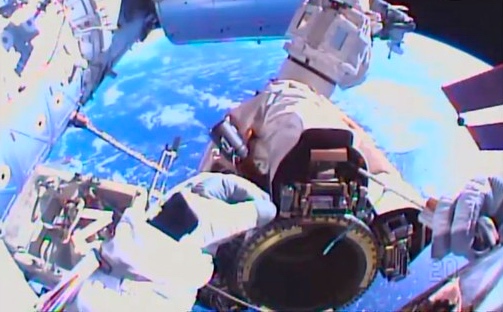 As Wednesday's February 25, 2015 American spacewalk began, the Russian Space Agency announced new plans to conclude their presence at the space station in 2024. ROSCOSMOS chairman of manned space flight Yuri Koptev announced on Wednesday plans to separate several of their science and docking modules in nine years to form a new Russian-based space station. "The concept involves the use of the ISS until 2024, and then plan to create a Russian space base on the basis separated from the ISS modules," the Russian Space Agency said in a new press release. "Configuration of multipurpose laboratory module, nodal module and scientific power module to create a promising Russian space station to meet the challenges of providing secure access to the Russian space." ROSCOSMOS added their interest in landing a Russian on the Moon beginning in 2030, "Russia will target study of the moon using unmanned spacecraft to lunar orbit and the surface of Earth's natural satellite. At the turn of 2030 and will be out for manned missions to the moon." The release also mentioned plans to "implement programs of deep space exploration".