"Now the technology is at the level where we can make this happen, and society is moving in this direction," Levander said by phone last month. "If we want marine to do this, now is the time to move." The European Union is funding a 3.5 million-euro ($4.8 million) study called the Maritime Unmanned Navigation through Intelligence in Networks project. The researchers are preparing the prototype for simulated sea trials to assess the costs and benefits, which will finish next year, said Hans-Christoph Burmeister at the Fraunhofer Center for Maritime Logistics and Services CML in Hamburg. 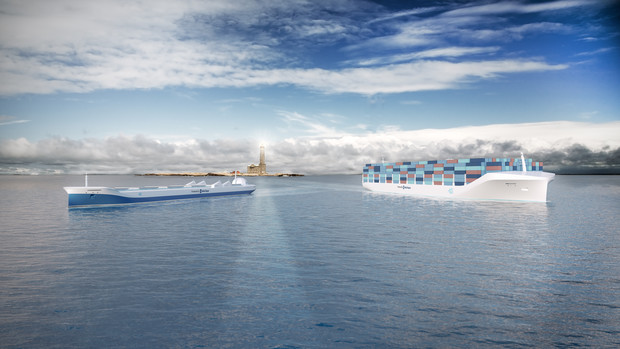 The Schematics Show Vessels Loaded with Containers from Front to Back

Without the Bridge Structure Where the Crew Lives

Even so, maritime companies, insurers, engineers, labor unions and regulators doubt unmanned ships could be safe and cost-effective any time soon.

While the idea of automated ships was first considered decades ago, Rolls-Royce started developing designs last year. Marine accounts for 16 percent of the company's revenue, data compiled by Bloomberg show. Descended from the luxury car brand now operated by Bayerische Motoren Werke AG, Rolls-Royce also makes plane engines and turbines. The company's schematics show vessels loaded with containers from front to back, without the bridge structure where the crew lives. By replacing the bridge -- along with the other systems that support the crew, such as electricity, air conditioning, water and sewage -- with more cargo, ships can cut costs and boost revenue, Levander said. The ships would be 5 percent lighter before loading cargo and would burn 12 percent to 15 percent less fuel, he said.

Crew costs of $3,299 a day account for about 44 percent of total operating expenses for a large container ship, according to Moore Stephens LLP, an industry accountant and consultant. The potential savings don't justify the investments that would be needed to make unmanned ships safe, said Tor Svensen, chief executive officer of maritime for DNV GL, the largest company certifying vessels for safety standards.  "I don't think personally that there's a huge cost-benefit in unmanned ships today, but technologically it's possible," Svensen said Feb. 4 at a conference in New York. "My prediction is that it's not coming in the foreseeable future."  While each company can develop its own standards, the 12-member International Association of Classification Societies in London hasn't developed unified guidelines for unmanned ships, Secretary Derek Hodgson said. "Can you imagine what it would be like with an unmanned vessel with cargo on board trading on the open seas? You get in enough trouble with crew on board," Hodgson said by phone Jan. 7. "There are an enormous number of hoops for it to go through before it even got onto the drawing board."

Unmanned ships are currently illegal under international conventions that set minimum crew requirements, said Simon Bennett, a spokesman for the London-based International Chamber of Shipping, an industry association representing more than 80 percent of the global fleet. The country where a ship is registered is responsible for regulating vessels within its own waters and for enforcing international rules, said Natasha Brown, a spokeswoman for the International Maritime Organization, the United Nations agency in London that has overseen global shipping for almost 70 years. The IMO hasn't received any proposals on unmanned, remote-controlled ships, she said in a Feb. 6 e-mail. IMO regulations apply to seagoing vessels trading internationally and exceeding 500 gross tons, except warships and fishing boats.  As long as drone ships don't comply with IMO rules, they would be considered unseaworthy and ineligible for insurance, according to Andrew Bardot, secretary and executive officer of the London-based International Group of P&I Clubs, whose 13 members cover 90 percent of the global fleet.

The International Transport Workers' Federation, the union representing about 600,000 of the world's more than 1 million seafarers, is opposed.

"It cannot and will never replace the eyes, ears and thought processes of professional seafarers," Dave Heindel, chairman of the ITF's seafarers' section in London, said in an e-mailed statement. "The human element is one of the first lines of defense in the event of machinery failure and the kind of unexpected and sudden changes of conditions in which the world's seas specialize. The dangers posed to the environment by unmanned vessels are too easily imagined."  Levander of Rolls-Royce said the transition will happen gradually as computers increase their role in navigation and operations. Container ships and dry-bulk carriers will probably be the first to forgo crews, he said. Tankers hauling hazardous materials such as oil and liquefied natural gas will probably remain manned longer because of the perception that having people on board is safer, he said.

Crews will offer no safety advantage after ships evolve equipment for remote control, preventive maintenance and emergency back-ups, Levander said. Unmanned ships will need constant and comprehensive computer monitoring to anticipate failures in advance and "redundant" systems to kick in, similar to those on airplanes, he said.  The computers would also be constantly analyzing operations data to improve efficiency and save money, he said. Cameras and sensors can already detect obstacles in the water better than the human eye.  "It's a given that the remote-controlled ship must be as safe as today," Levander said. "But we actually think it can be even much safer than today."  Human error causes most maritime accidents, often relating to fatigue, according to Allianz Global Corporate & Specialty AG. Total losses are declining, with 106 in 2012, 24 percent below the 10-year average, according to the most recent data from the unit of the Munich-based insurer.

Unmanned ships would also reduce risks such as piracy, since there would be no hostages to capture, Levander said. It would also eliminate liability for repatriating sailors when owners run out of money or abandon crews, which has stranded at least 2,379 people in the past decade.  Drone ships would become vulnerable to a different kind of hijacking: from computer hackers. While the technology may never be fully secure, it needs to be so difficult to break that it's not worth the effort, according to Levander.  Unmanned ships would still require captains to operate them remotely and people to repair and unload them in port. These workers would have better quality of life compared with working at sea, Levander said.

Currently the debate is more academic than operational, said Peter Sand, an analyst at the Bagsvaerd, Denmark-based Baltic and International Maritime Council, whose members control about 65 percent of the global fleet. None of them have raised the question of drone ships with the trade group, he said. Levander is accustomed to chilly receptions. When he broached the subject at an industry conference in London last May, the audience audibly scoffed, and other speakers on Levander's panel dismissed the idea.  "If everybody in the industry would say, 'Yes, this is the way to go,' then we are too late," Levander said. "I expect ship owners to be conservative, but it will change."