Ulrichs thought, as did most members of the third sex who popularized the term "homosexual" for themselves, that masculine men can never have sexual desires for other men, and a male necessarily had to be feminine gendered or had to have a female inside him to be attracted to men. 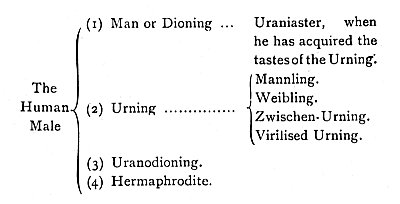 This was supported by his own experience as well as the fact that men had sex with men only secretively, due to the cultural climate. Ulrichs also defined the men (as opposed to third genders) as "diones," meaning "men who like women."  Later, Austrian third gender and human rights activist Karl Maria Kertbeny coined the terms "homosexual" and "heterosexual." For most of this period, these terms were popular only amongst the third gender and scientific communities, the latter of which was developing the concept of homosexuality as a mental disorder.

The idea of "men who like men" being different from "men who like women", as well as the idea of differentiating male sexuality between "heterosexuality" and "homosexuality," was born. The underlying factor for division, however, remained gender orientation (masculinity and femininity). Mainstream men, who were now decidedly "heterosexual," however, rarely related with these terms, as they saw themselves as neither heterosexual or homosexual for a long time. 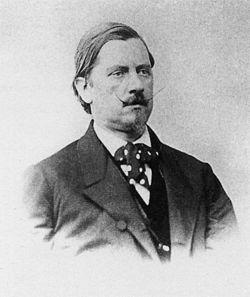 Karl-Maria Kertbeny (born Karl-Maria Benkert) (Vienna, February 28, 1824 – Budapest, January 23, 1882) was an Austrian-born Hungarian journalist, memoirist, and human rights campaigner. He is best known for coining the words heterosexual and homosexual. As a young man, while working as a bookseller's apprentice, Benkert had a close friend who was homosexual. This young man killed himself after being blackmailed by an extortionist. Benkert later recalled that it was this tragic episode which led him to take a close interest in the subject of homosexuality, following what he called his "instinctive drive to take issue with every injustice." After a stint in the Hungarian army, Benkert made a living as a journalist and travel writer, and wrote at least twenty-five books on various subjects. In 1847, he legally changed his name from Benkert to Karl-Maria Kertbeny (or Károly Mária Kertbeny), a Hungarian name with aristocratic associations. He settled in Berlin in 1868, still unmarried at 44. He claimed in his writings to be "normally sexed," and there is no direct evidence to contradict this, despite the skepticism of subsequent writers. 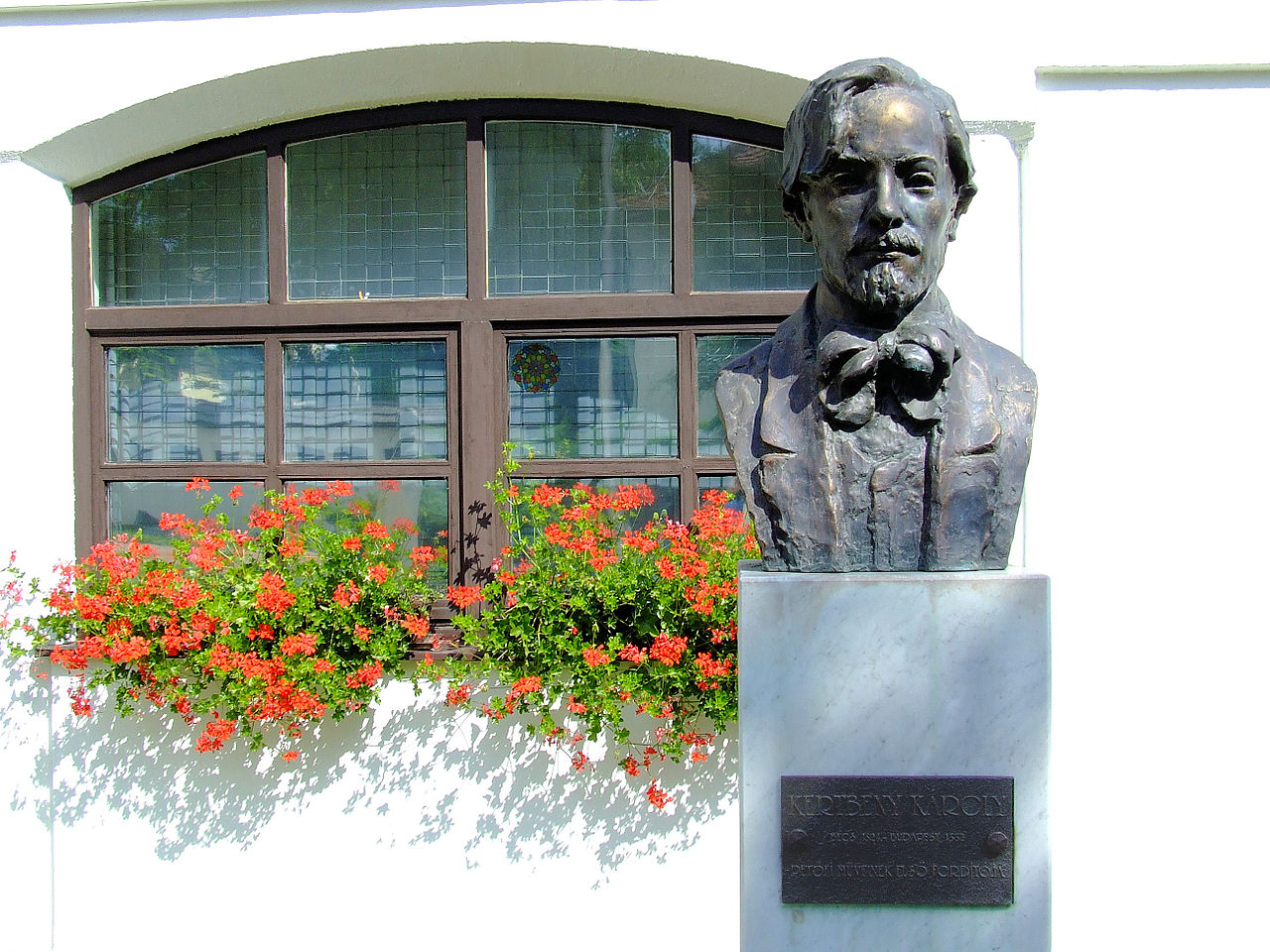 Nevertheless, from this time on he began to write extensively on the issue of homosexuality, motivated, he said, by an "anthropological interest" combined with a sense of justice and a concern for the "rights of man." In 1869, he anonymously published a pamphlet entitled Paragraph 143 of the Prussian Penal Code of 14 April 1851 and Its Reaffirmation as Paragraph 152 in the Proposed Penal Code for the North German Confederation. An Open and Professional Correspondence to His Excellency Dr. Leonhardt, Royal Prussian Minister of Justice. A second pamphlet on the same subject soon followed. In his pamphlets, Kertbeny argued that the Prussian sodomy law, Paragraph 143 (which later became Paragraph 175 of the penal code of the German Empire), violated the "rights of man." He advanced the classic liberal argument that consensual sexual acts in private should not be subject to criminal law. Recalling his young friend, he argued strongly that the Prussian law allowed blackmailers to extort money from homosexuals and often drove them to suicide. 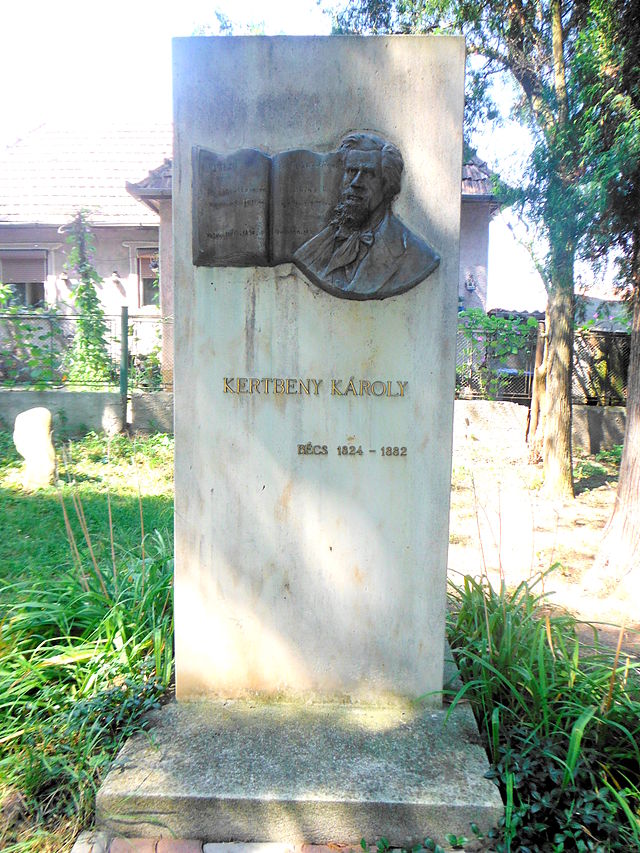 Kertbeny also put forward the view that homosexuality was inborn and unchangeable, an argument which would later be called the "medical model" of homosexuality. This contradicted the dominant view up to that time, that men committed "sodomy" out of mere wickedness. Homosexual men, he said, were not by nature effeminate, and he pointed out that many of the great heroes of history were homosexual. With Heinrich Hössli and Karl Heinrich Ulrichs, he was among the first writers to put these now-familiar arguments before the public. During 1869, in the course of these writings, Kertbeny published the term (in German) "homosexual" (which, along with heterosexual, he first used in private correspondence on May 8, 1868), as part of his system for the classification of sexual types, as a replacement for the pejorative terms "sodomite" and "pederast" that were used in the German- and French-speaking world of his time. In addition, he called the attraction between men and women "heterosexualism", masturbators "monosexualists", and practitioners of anal intercourse "pygists". After publishing his two important pamphlets, Kertbeny faded from the scene. In 1880, he contributed a chapter on homosexuality to Gustav Jäger's book Discovery of the Soul, but Jäger's publisher decided it was too controversial and omitted it. Nevertheless, Jäger used Kertbeny's terminology elsewhere in the book. The German sex researcher Richard von Krafft-Ebing, in his Psychopathia Sexualis (1886), borrowed the terms homosexual and heterosexual from Jäger's book. Krafft-Ebing's work was so influential that these became the standard terms for differences in sexual orientation, superseding Ulrichs' word Urning. 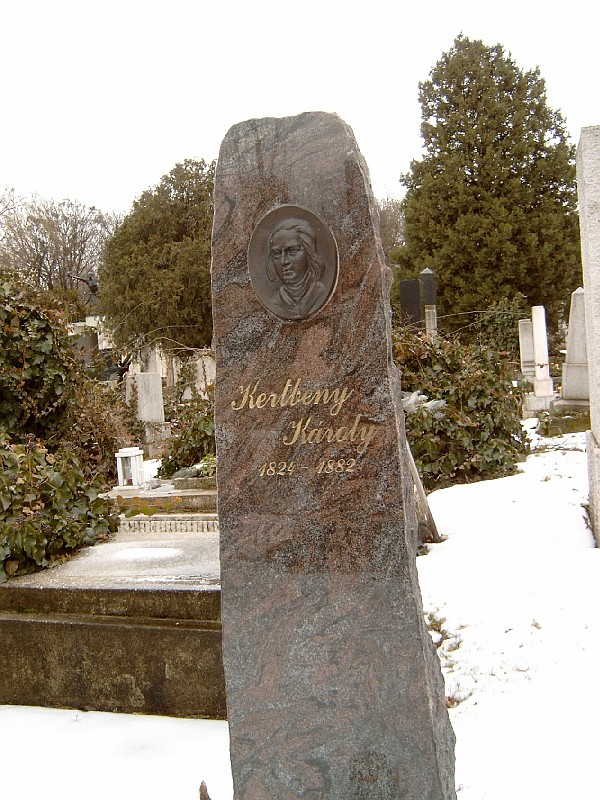 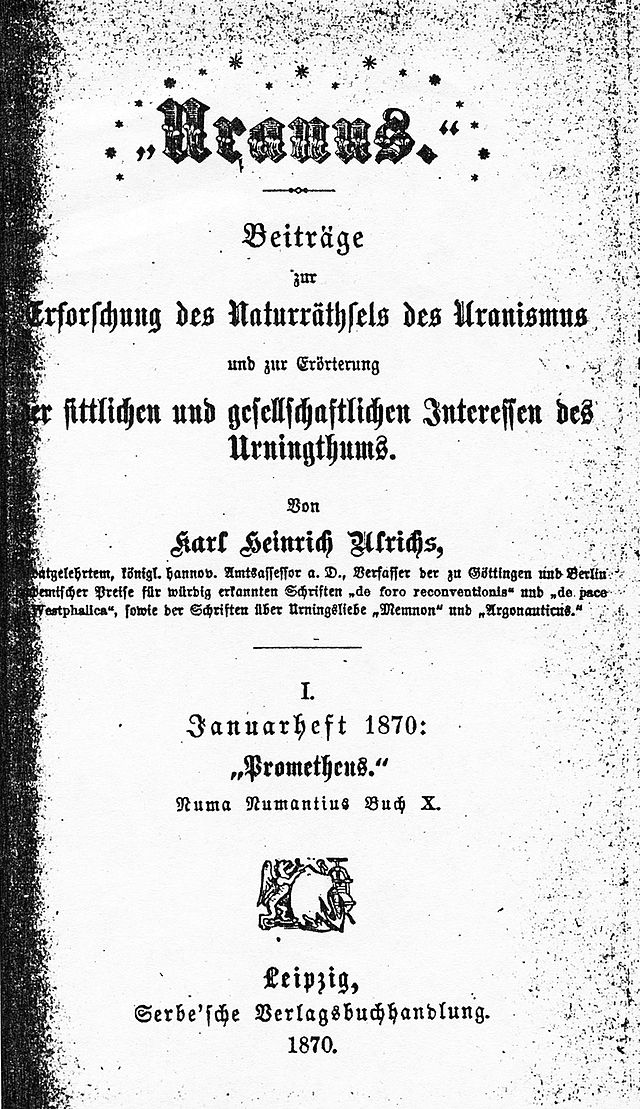 "Until now science has not sought to investigate this passive animal magnetism (by no means an isolated phenomenon), although the doctor, the anthropologist and physiologist, the jurist, the psychologist, and the moralist could cultivate an entirely new field. In fact they have made not the slightest effort to investigate its nature: rather (misled by poorly understood Bible passages and by laws based on such Bible passages—laws whose moral value stands on the same level as those against witchcraft and heresy in the Middle Ages) they have believed they should ignore or disdain it with hatred and scorn, examples of which are in scientific books".

"The Urning is not by a hair's breadth any more dangerous to immature boys than the genuine man is to immature girls. For the rest, I gladly leave the child molester to his deserved punishment by the law. Let the integrity of a will-less minor be sacred to every Urning.The prohibition of the expression of the sex drive, i.e., between consenting adults in private, lies outside the legal sphere".

The Riddle of "Man-Manly Love"

"Until my dying day I will look back with pride that I found the courage to come face to face in battle against the spectre which for time immemorial has been injecting poison into me and into men of my nature. Many have been driven to suicide because all their happiness in life was tainted. Indeed, I am proud that I found the courage to deal the initial blow to the hydra of public contempt". 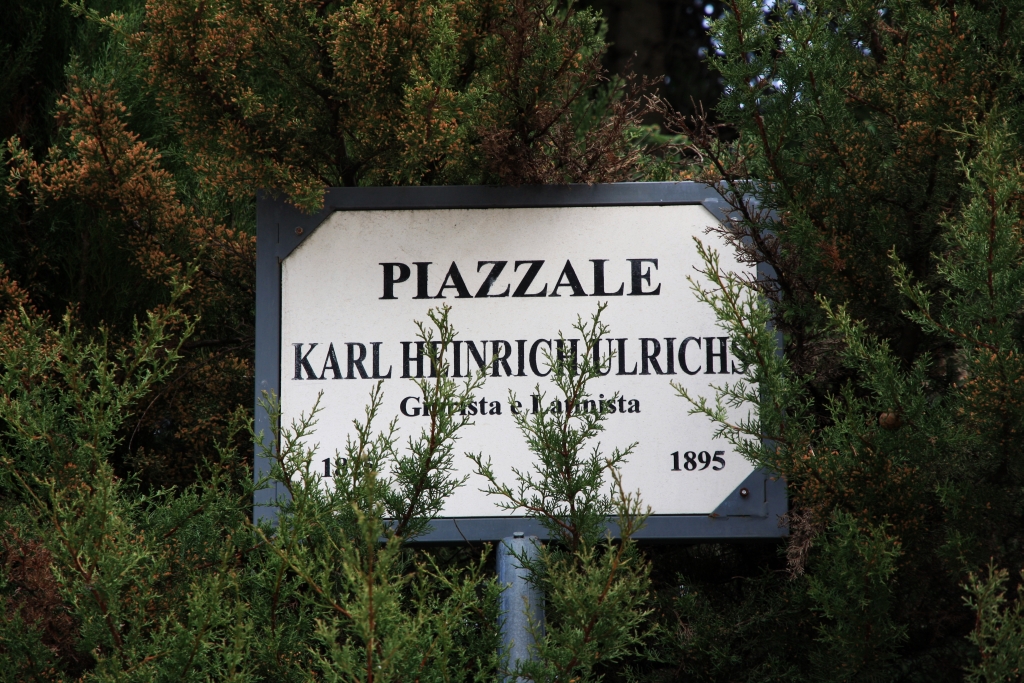 Karl Heinrich Ulrichs was the first to formulate a scientific theory of homosexuality. Indeed, his theory implicated, as Klaus Müller has emphasized, "the first scientific theory of sexuality altogether."  It was set forth and elaborated in five writings published in 1864 to 1865. The series of writings was continued—there were twelve in all, the last appearing in 1879—but with only slight revisions in the theory, Ulrichs's intention in his writings was not merely explanatory, but also—and especially—emancipatory. This was based on his view that the condition of being homosexual is inborn. This was a major departure from previous and subsequent theories that saw the practice of homosexuality/"sodomy" as an acquired vice. In this Ulrichs was the first in a long and continuing line of researchers who believe that a proof of the "naturaless" of homosexuality, that is, the discovery of a biological basis for it, will lead to equal legal and social treatment of hetero- and homosexuals. 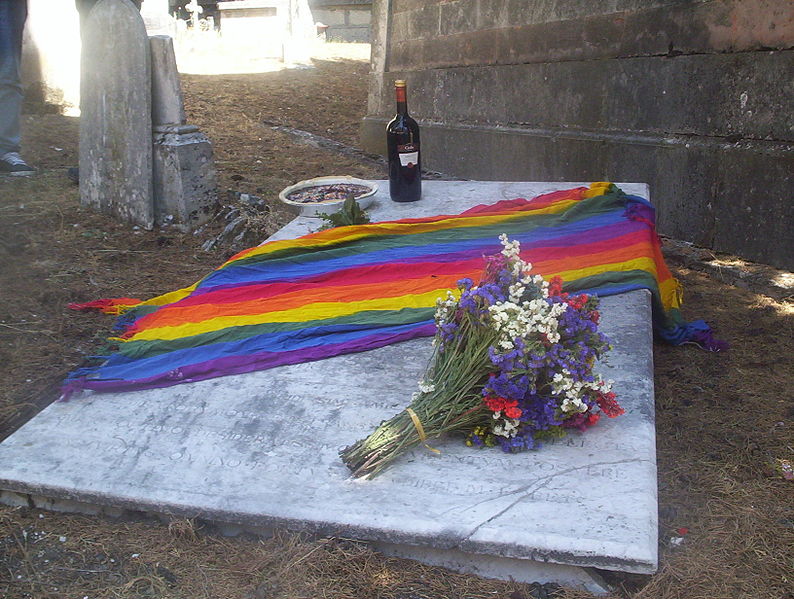 In 1870, Ulrichs gestured toward likely biological underpinnings of homosexuality as an argument for gay rights, arguing that a male homosexual has inalienable rights. His sexual orientation is a right established by nature. Legislators have no right to veto nature; no right to persecute nature in the course of its work; no right to torture living creatures who are subject to those drives nature gave them.