The Most Powerful Food Combinations

What's more fascinating, however, is that the evolution between eater and eaten might answer the long-held question about why humans live longer, healthier lives on traditional diets.  As researchers work to unravel the complexities of the interactions of the foods we eat, try these combinations, the most powerful food synergies currently known to science. 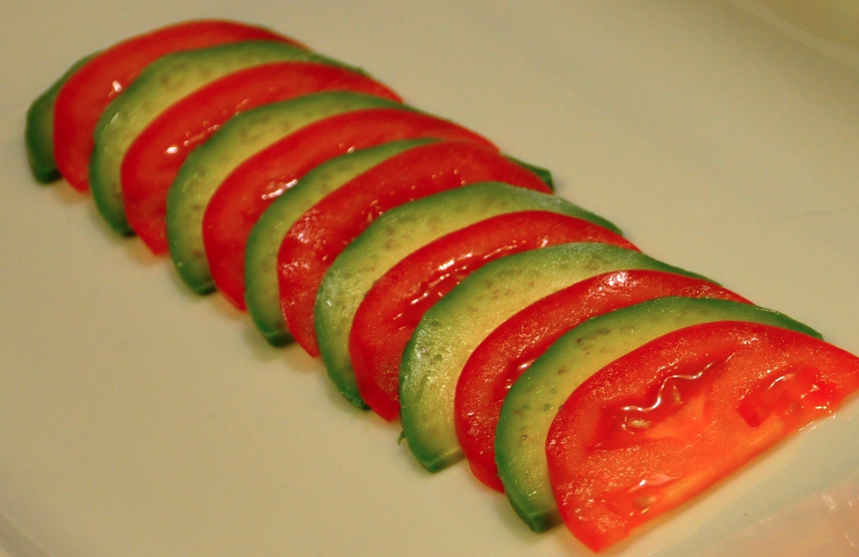 Tomatoes are rich in lycopene, a pigment-rich antioxidant known as a carotenoid, which reduces cancer risk and cardiovascular disease. Fats make carotenoids more bioavailable, a fact that makes a strong case for adding tomatoes to your guacamole.  "This also has a Mediterranean cultural tie-in," says registered dietitian Susan Bowerman of California Polytechnic State University. "The lycopene in tomato products such as pasta sauce is better absorbed when some fat (e.g., olive oil) is present than if the sauce were made fat free." This may also explain why we love olive oil drizzled over fresh tomatoes. And when it comes to salads, don't choose low-fat dressings. A recent Ohio State University study showed that salads eaten with full-fat dressings help with the absorption of another carotenoid called lutein, which is found in green leafy vegetables and has been shown to benefit vision. If you don't like heavy salad dressing, sprinkle walnuts, pistachios, or grated cheese over your greens. 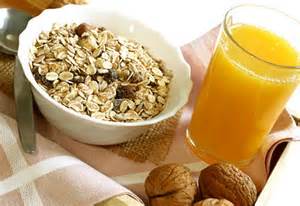 A study from the Antioxidants Research Lab at the U.S. Department of Agriculture shows that drinking vitamin C-rich orange juice while eating a bowl of real oatmeal (read: not processed) cleans your arteries and prevents heart attacks with two times as much efficacy than if you were to ingest either breakfast staple alone. The reason? The organic compounds in both foods, called phenols, stabilize your LDL cholesterol (low-density lipoprotein, or so-called "bad" cholesterol) when consumed together. 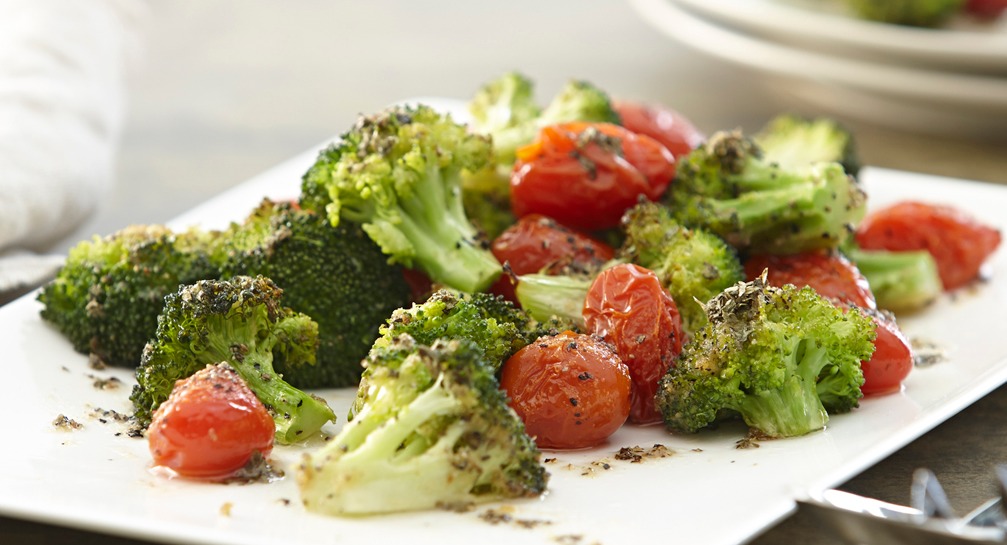 New research shows that this combo prevents prostate cancer, but no one is sure why. In a recent Cancer Research study, John W. Erdman Jr., Ph.D., of the University of Illinois, proved that the combination shrunk prostate-cancer tumors in rats and that nothing but the extreme measure of castration could actually be a more effective alternative treatment. (What more motivation do you need to embrace this one-two punch?) "We know that tomato powder lowers the growth of tumors," says Erdman. "We know that broccoli does too. And we know they're better together. But it's going to take years to find out why." 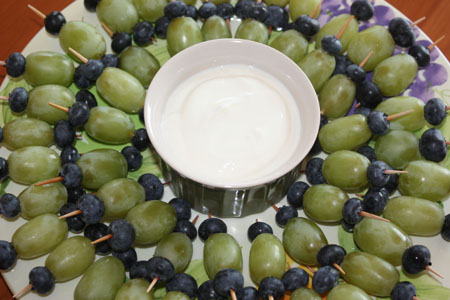 "Eating a variety of fruit together provides more health benefits than eating one fruit alone," says Bowerman. "Studies have shown that the antioxidant effects of consuming a combination of fruits are more than additive but synergistic."

In fact, a study published in the Journal of Nutrition by Rui Hai Liu, Ph.D., from Cornell University's department of food science, looked at the antioxidant capacity of various fruits individually (apples, oranges, blueberries, grapes) versus the same amount of a mixture of fruits, and found that the mix had a greater antioxidant response. According to the study, this effect explains why "no single antioxidant can replace the combination of natural phytochemicals in fruits and vegetables." The author also recommends eating five to 10 servings of a variety of fruits and vegetables daily to reduce disease risks, as opposed to relying on expensive dietary supplements for these compounds. "There are a huge number of compounds yet to be identified," adds Jacobs. 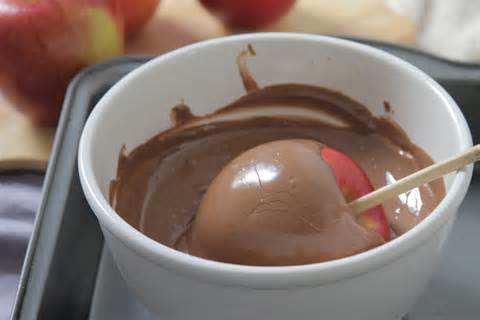 Apples, particularly Red Delicious, are known to be high in an anti-inflammatory flavonoid called quercetin, especially in their skins. (Note: It's important to buy organic because pesticides concentrate in the skins of conventionally grown apples.) By itself, quercetin has been shown to reduce the risk of allergies, heart attack, Alzheimer's, Parkinson's, and prostate and lung cancers.  Chocolate, grapes, red wine, and tea, on the other hand, contain the flavonoid catechin, an antioxidant that reduces the risks for atherosclerosis and cancer. Together, according to a study done by Barry Halliwell, Ph.D., a leading food science professor at the National University of Singapore, catechins and quercetin loosen clumpy blood platelets, improving cardiovascular health and providing anticoagulant activity. Quercetin is also found in buckwheat, onions, and raspberries.  Susan Kraus, a clinical dietitian at Hackensack University Medical Center in New Jersey, recommends the following combinations: sangria with cut-up apples; green tea with buckwheat pancakes and raspberries; and kasha (roasted buckwheat, made in a pilaf) cooked with onions. 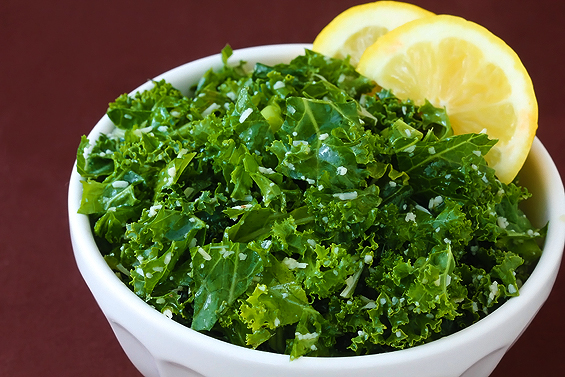 "Vitamin C helps make plant-based iron more absorbable," says nutritionist Stacy Kennedy of the Dana Farber Cancer Institute. It actually converts much of the plant-based iron into a form that's similar to what's found in fish and red meats. (Iron carries oxygen to red blood cells, staving off muscle fatigue.) Kennedy suggests getting your vitamin C from citrus fruits, leafy green vegetables, strawberries, tomatoes, bell peppers, and broccoli, and getting plant-based iron from leeks, beet greens, kale, spinach, mustard greens, Swiss chard, and fortified cereals. So whether you're sautéing dark greens or making a salad, be sure to include a squeeze of citrus. You'll increase your immunity and muscle strength with more punch than by eating these foods separately. 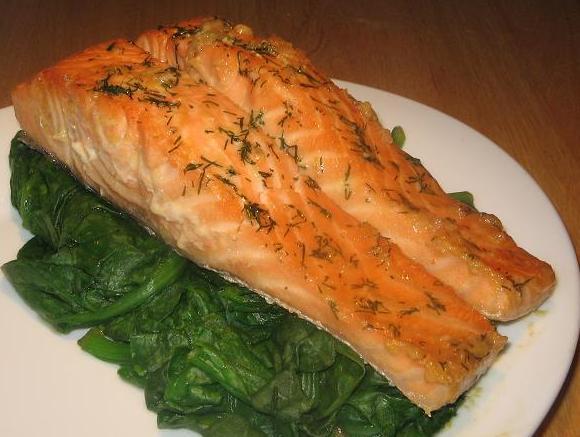 It's true that soy has been shown in studies to lower sperm counts, but that's mainly in processed forms such as soy cheese, soy milk, and the unpronounceable forms listed on the labels of your favorite artery-clogging processed foods. This means that eating unprocessed forms of soy, such as edamame and tofu, is perfectly fine in moderation. That's good news because, according to Mark Messina, Ph.D., former director of the diet and cancer branch of the National Cancer Institute at the National Institutes of Health and now an adjunct associate professor at Loma Linda University, an isoflavone in soy called genistein inhibits enzymes in the colon and prostate, raising the amount of vitamin D bioavailability in those tissues. "The higher vitamin D levels may offer protection against cancer," says Messina. "There is emerging research suggesting that vitamin D reduces cancer risk, and many people don't get enough of the vitamin. You do make it in your skin, but most people don't make enough." Fish such as salmon and tuna are high in vitamin D, so take a cue from the Asian diet and eat fish with a side of edamame. 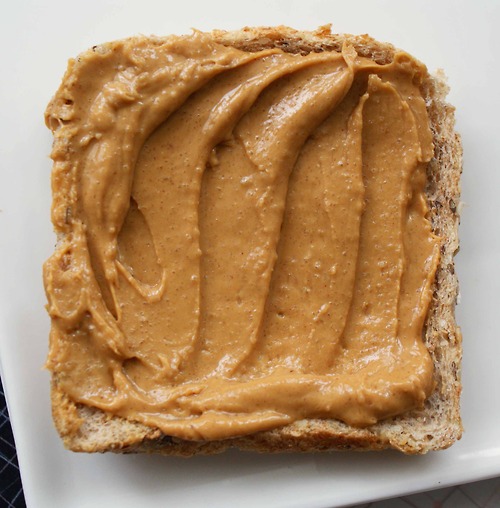 According to Diane Birt, P.D., a professor at Iowa State University and a food synergy expert, the specific amino acids absent in wheat are actually present in peanuts. You need, and very rarely receive in one meal, the complete chain of amino acids (the best form of protein) to build and maintain muscle, especially as you get older. In short, while this combo exhibits only what Birt calls a "loose definition" of food synergy, it gives good evidence that a peanut-butter sandwich isn't junk food if it's prepared with whole-wheat bread (not white) and eaten in moderation (once a day).

So enjoy a peanut-butter sandwich right after a workout instead of drinking a terrible gym-rat shake. Just make sure the peanut butter doesn't have added sugar, chemical ingredients you can't pronounce, or cartoon characters on the label. 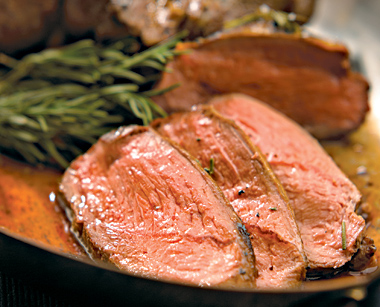 Grilling over an open flame produces nasty carcinogens, but if you get a little more experimental with your spices, you can temper the cancer-causing effects of the charred flesh. The herb rosemary, which mixes well with all kinds of grilled foods and contains the antioxidants rosmarinic acid and carnosic acid, was recently shown in a Kansas State University study to lower the amount of the cancer-causing heterocyclic amines (or HCAs) that appear in the charred meat when you grill at temperatures of 375°F to 400°F. Why? It's thought that the herb's antioxidants literally soak up the meat's dangerous free radicals. 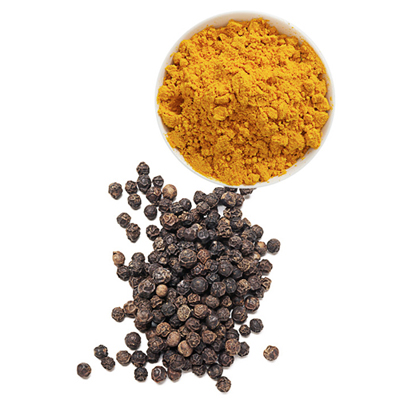 A tangy yellow South Asian spice used in curry dishes, turmeric has long been studied for its anticancer properties, anti-inflammatory effects, and tumor-fighting activities known in nutrition-speak as anti-angiogenesis. The active agent in the spice is a plant chemical, or polyphenol, called curcumin. One of the problems with using turmeric to improve your health, according to Kennedy, is its low bioavailability when eaten on its own. But there's a solution, and it's probably in your pantry. "Adding black pepper to turmeric or turmeric-spiced food enhances curcumin's bioavailability by 1,000 times, due to black pepper's hot property called piperine," says Kennedy. "This is one reason it's thought that curry has both turmeric (curcumin) and black pepper combined." Translation: You'll get the benefits of turmeric if you pepper up your curries. 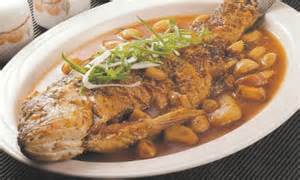 Most seafood lovers don't realize there's a synergy of nutrients inside a piece of fish: Minerals such as zinc, iron, copper, iodine, and selenium work as cofactors to make the best use of the natural anti-inflammatory and cholesterol-reducing fish oils EPA and DHA. What's more, cooking your fish with garlic lowers your total cholesterol better than eating those fillets or cloves alone. A study at University of Guelph, in Ontario, found that garlic keeps down the small increase in LDL cholesterol that might result from fish-oil supplements. 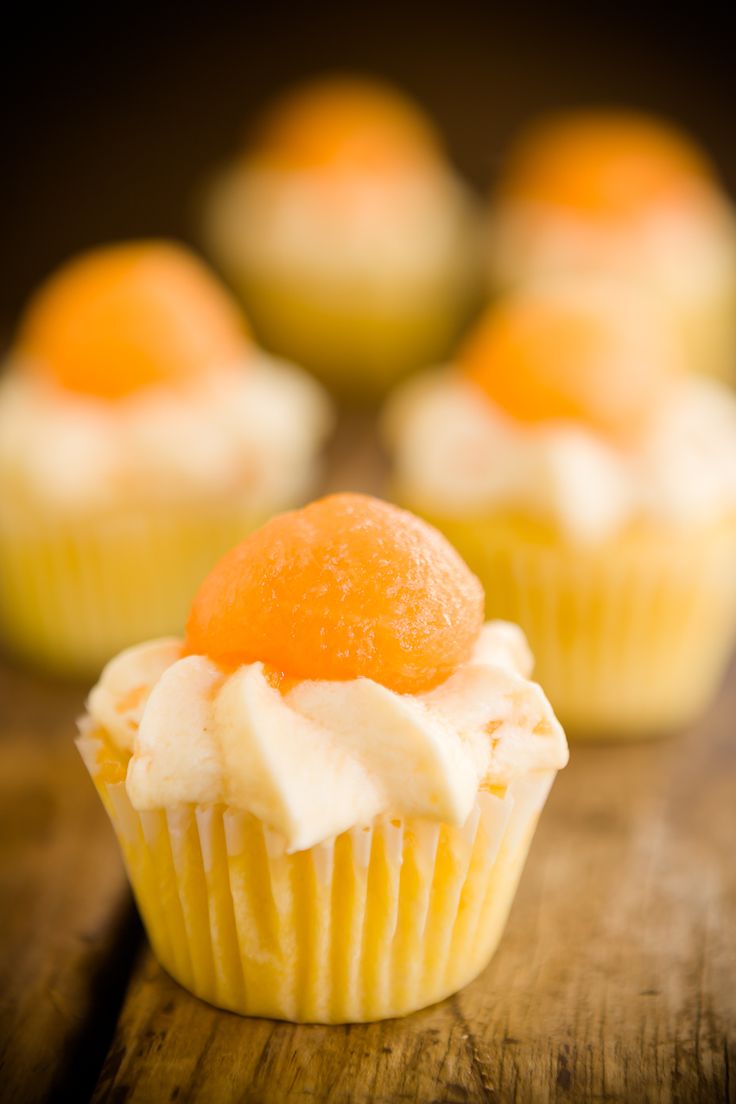 The most popular (and an awfully complete form of) breakfast protein works even better for you when you eat it with the good carbohydrates in your morning cantaloupe. According to Kennedy, a very basic food synergy is the concept of eating protein with foods that contain beneficial carbohydrates, which we need for energy. Protein, Kennedy reminds us, slows the absorption of glucose, or sugar, from carbohydrates. "This synergy helps by minimizing insulin and blood-sugar spikes, which are followed by a crash, zapping energy. High insulin levels are connected with inflammation, diabetes, cancer, and other diseases. By slowing the absorption of glucose, your body can better read the cues that you are full. This helps prevent everything from overeating to indigestion." So cut as many bad carbs (i.e., anything white, starchy, and sugary) as you want. But when you eat healthful carbs (whole grains, fruit, vegetables), don't eat them on their own. 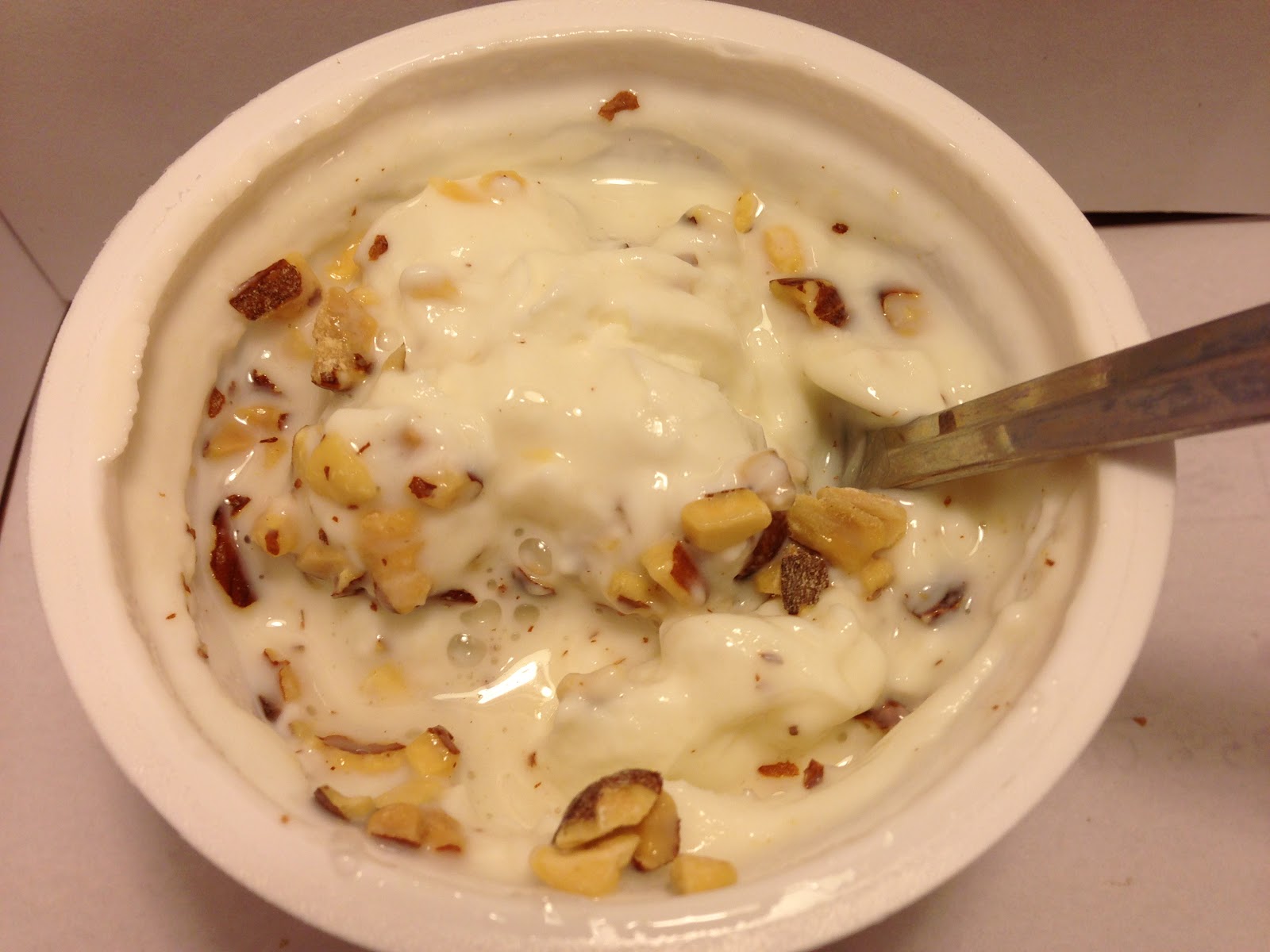 We already know that good fats help increase lycopene absorption. But did you know that many essential vitamins are activated and absorbed best when eaten with fat? Vitamins that are considered fat-soluble include A, D, and E. Carrots, broccoli, and peas are all loaded with vitamin A and should be paired with a healthy fat such as the kind found in olive oil. Vitamin D—rich products include fish, milk, yogurt, and orange juice. So toss some almonds into your yogurt, eat full-fat dairy foods, and pair your morning OJ with a slice of bacon. To get the most vitamin E with fat-soluble foods, try baked sweet-potato slices or spinach salad topped with olive oil.