Around 200 light years away, this star (HIP 56948) took the title of most eerily similar solar twin in 2007, deposing the previous lookalike champion, 18 Scorpii. New observations show that HIP 56948 is even more of a doppelganger than previously thought, and improve the odds of Earth-like habitats.  The latest precise observations can detect no difference in size, mass and brightness between HIP 56948 and the sun, and it is only about 17°C warmer (while 18 Scorpii is 54°C warmer).  Better still, while 18 Scorpii has appreciably more iron in its atmosphere, the composition of HIP 56948 is almost identical to the sun's.  That is promising. The Sun is depleted in some heavy elements compared with most other stars its size. One theory is that those heavy elements have been locked up in rocky planets instead of mixed up in the star.

If so, the authors calculate, HIP 56948's planetary system should have the same amount of Earth-like material as ours. "It is a hint that what is missing is material that could form other Earths," says team leader Jorge Melendez at the University of Sao Paolo in Brazil.  Because the chemistry is so similar, such planets are more likely to have similar minerals and rocks to Earth and the other terrestrial planets of the solar system.  The team have also found that this system has no giant inner planets that would destabilise an Earth-like world.  So perhaps when the sun rises on a planet orbiting HIP 56948, it casts a familiar, warming yellowish-while light – a light that falls on blue seas, green leaves and granite mountains.  The light would even be familiar to Earthly artists, although this world perhaps has not had time to evolve its Raphaels and Turners. HIP 56948's only distinct feature is that it's about a billion years younger than the sun. If evolution is running along the same path, the authors say, "complex life may be just developing ... in any hypothetical Earth that this star may host". 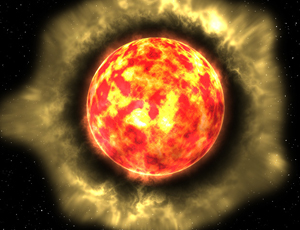 Cosmic Duststorms May be Composed of Transparent Crystals

The sun's dying breath will be no feeble wheeze. Instead, our star will go out in a blustering rage, launching a series of stellar sandstorms into the night. Humans are unlikely to be around in 7 or 8 billion years to witness this cosmic gale, but if we are it will be awe-inspiring: far faster than any Earthly hurricane, far denser than the solar wind blowing past Earth today and lasting more than 10,000 years.  "Stars like the sun die in a phase of catastrophic mass loss called a superwind," explains Albert Zijlstra at the University of Manchester, UK. Zijlstra and his colleagues have now caught a glimpse of our sun's doom in the dust around other stars, which seems to reveal what drives these sandstorms.  Superwinds were already known to exist, but it was not clear how they could be powered. One idea was that iron-tainted dust might absorb starlight to be pushed outwards. The problem with that model is that the dust would heat up and vaporise before it could really get moving and drive the wind.  Zijlstra's team used the Very Large Telescope in Chile to look at three red giant stars that are in this late stage of life. By using polarisers and masking off parts of the telescope, they could pick out the polarised light coming from shells of dust around each star.