Equally comfortable chatting about music with Sam Cooke or bantering with Ed McMahon on "TV's Bloopers and Practical Jokes," Clark was listed among the Forbes 400 of wealthiest Americans. Clark, who died of a heart attack at a Santa Monica hospital, also was part of radio as partner in the United Stations Radio Network, which provided programs — including Clark's — to thousands of stations.  "There's hardly any segment of the population that doesn't see what I do," Clark told The Associated Press in a 1985 interview. "It can be embarrassing. People come up to me and say, 'I love your show,' and I have no idea which one they're talking about."

One of his later TV projects, "American Dreams," served as a fitting weekly tribute to Clark's impact. Airing from 2002 to 2005, this NBC drama centered on a Philadelphia family in the early 1960s and, in particular, on 15-year-old Meg, who, through a quirk of fate, found her way onto the set of Clark's teen dance show, "American Bandstand."  The nostalgic "American Dreams" depicted a musical revolution, which Clark so reassuringly helped usher in against the backdrop of a nation in turmoil. While never a hit, the series was embraced by older viewers as a warm souvenir of the era that spawned Clark, and as an affectionate history lesson for their children and grandchildren.  Clark bridged the rebellious new music scene and traditional show business. He defended pop artists and artistic freedom, the Rock and Roll Hall of Fame said in an online biography of the 1993 inductee. He helped give black artists their due by playing original R&B recordings instead of cover versions by white performers, and he condemned censorship.

He joined "American Bandstand" in 1956 after Bob Horn, who'd been the host since its 1952 debut, was fired. A year later, Clark integrated the show with black dancers.  "It still wasn't acceptable for them to dance with white kids, so the blacks just danced with each other. We were waiting for the explosion, but it never happened," Clark told Pennsylvania Heritage Magazine in 1998. "The wonderful part about our decision to integrate then was that there were no repercussions, no reverberations, no battles at all — it just happened right there on a television screen in front of millions of people." 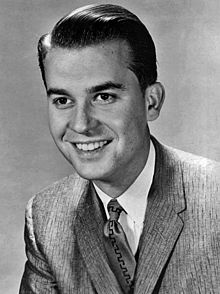 Under Clark's guidance, "Bandstand" went from a local Philadelphia show to a national phenomenon, introducing stars from Buddy Holly to Madonna. It was one of network TV's longest-running series as part of ABC's daytime lineup from 1957 to 1987.  "I played records, the kids danced, and America watched," was how Clark once described the series' simplicity. In his 1958 hit "Sweet Little Sixteen," Chuck Berry sang that "they'll be rocking on Bandstand, Philadelphia, P-A."  As a host, Clark had the smooth delivery of a seasoned radio announcer. As a producer, he had an ear for a hit record. He also knew how to make wary adults welcome this odd new breed of music in their homes.