The Statue of Liberty Celebrates 125 Years 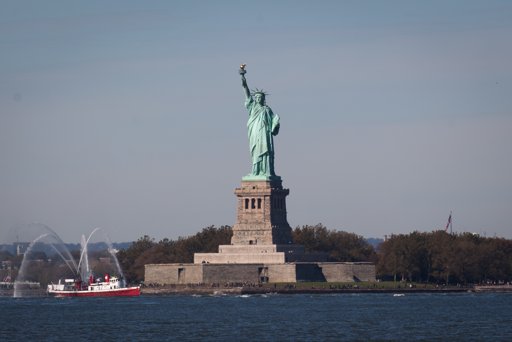 The Statue of Liberty, a gift from France, was conceived to symbolize the friendship between the two countries and a shared love of liberty. President Glover Cleveland dedicated the statue on Oct. 28, 1886. New York Mayor Michael Bloomberg said, "If anybody around this world wants to pick up their family and move so that their family can have freedom -- freedom to speak, freedom to be in charge of their own destiny, all the freedoms that we have incorporated into the Bill of Rights -- they always come to America." 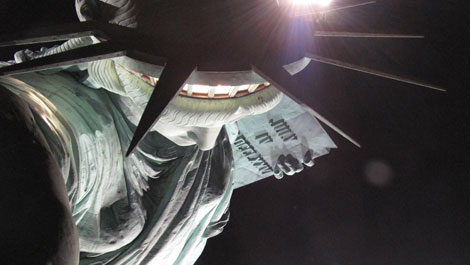 The 125th Anniversary celebration included actress Sigourney Weaver who recited Emma Lazarus' "The New Colossus" and gestured to the statue behind her at the words "a mighty woman with a torch." Cleveland's grandson George, a dead-ringer for the former president, was on hand for the event and received a plaque from the National Park Service.  George Cleveland, a 59-year-old executive director of a senior center in North Conway, N.H., said his grandfather was prescient when he said that "a stream of light shall pierce the darkness of ignorance and man's oppression, until liberty enlightens the world." "We are still a work in progress," George Cleveland said. Then, with a 3-2-1 countdown, webcams streaming views from the statue's torch were switched on. The cameras offer panoramas of the Manhattan skyline, the Hudson River and Liberty Island.

"It's really a wonderful way from people from around the world to connect with Lady Liberty using today's technology," said David Luchsinger, the superintendent of the statue and Ellis Island. The statue's interior will be closed for renovations for about a year, though Liberty Island will remain open.

Liberty Enlightening The World (La Liberté éclairant le monde) is a colossal neoclassical sculpture designed by Frédéric Bartholdi. The statue, a gift to the United States from the people of France, is of a robed female figure representing Libertas, the Roman goddess of freedom, who bears a torch and a tabula ansata (a tablet evoking the law) upon which is inscribed the date of the American Declaration of Independence, July 4, 1776. A broken chain lies at her feet. The statue has become an icon of freedom and of the United States. 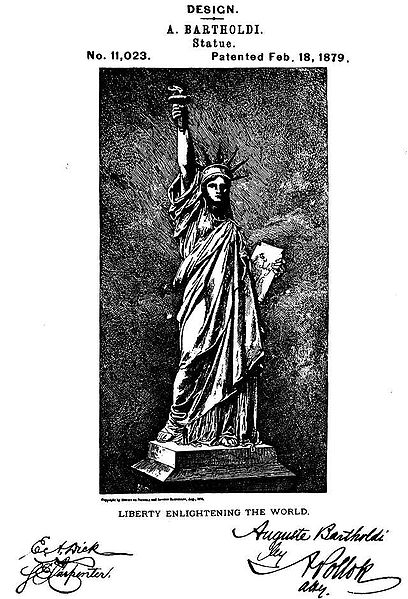 Bartholdi was inspired by French law professor and politician Édouard René de Laboulaye, who commented in 1865 that any monument raised to American independence would properly be a joint project of the French and American peoples. Due to the troubled political situation in France, work on the statue did not commence until the early 1870s. In 1875, Laboulaye proposed that the French finance the statue and the Americans provide the pedestal and the site. Bartholdi completed the head and the torch-bearing arm before the statue was fully designed, and these pieces were exhibited for publicity at international expositions. The arm was displayed at the Centennial Exposition in 1876 and in New York's Madison Square Park from 1876 to 1882. Fundraising proved difficult, especially for the Americans, and by 1885 work on the pedestal was threatened due to lack of funds. Publisher Joseph Pulitzer of the World started a drive for donations to complete the project that attracted more than 120,000 contributors, most of whom gave less than a dollar. The statue was constructed in France, shipped overseas in crates, and assembled on the completed pedestal on what was then called Bedloe's Island. The statue's completion was marked by New York's first ticker-tape parade and a dedication ceremony presided over by President Grover Cleveland. The statue was administered by the United States Lighthouse Board until 1901 and then by the Department of War; since 1933 it has been maintained by the National Park Service. The statue was closed for renovation for much of 1938. In the early 1980s, it was found to have deteriorated to such an extent that a major restoration was required. While the statue was closed from 1984 to 1986, the torch and a large part of the internal structure were replaced. After the September 11 attacks in 2001, it was closed for reasons of safety and security; the pedestal reopened in 2004 and the statue in 2009, with limits on the number of visitors allowed to ascend to the crown. The statue, including the pedestal and base, closed beginning on October 29, 2011 for up to a year, so that a secondary staircase and other safety features can be installed; Liberty Island remains open. Public access to the balcony surrounding the torch has been barred for safety reasons since 1916.