Gays Can Serve Openly in the US Military 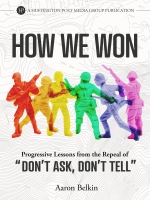 The issue would not have moved forward without President Obama's ongoing personal investment (see article on the DADT repeal) and given all the challenges he has faced on Capitol Hill, there are four factors that helped him make the difference. Unlike some other issues that require 60 Senate votes, President Obama had the option to suspend DADT via an executive order. Once the public learned this, a lot of heat was directed his way, and this pressure helped rededicate the White House to a legislative solution. Second, grassroots activists like Dan Choi were screaming and yelling and getting in the President's face. That mattered a lot. Third, public support for repeal is overwhelming, and includes a majority of Republicans. Finally, the research shows convincingly that DADT hurt the military.

Air Force Lt. Col. Sean Hackbarth expects Tuesday to be mostly a normal day. He plans to report for work at the Federal Aviation Administration, where he's a military liaison, and commute home to Northern Virginia when the day is done. Except that if someone asks or he decides to tell, Hackbarth can finally talk freely about his significant other. They've been together for nine years — and his name is Mike. 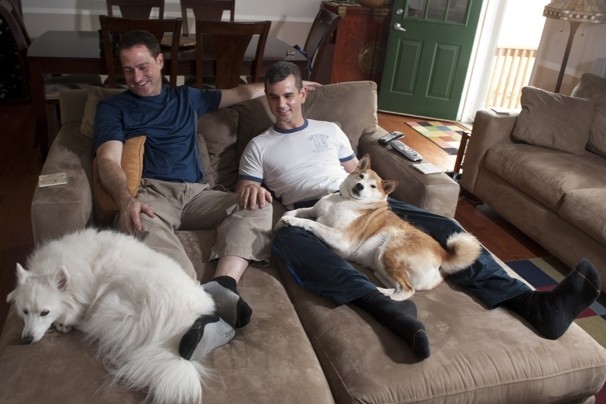 After almost 18 years, the Pentagon is formally repealing the ban on gays in uniform, known as "don't ask, don't tell," permitting troops for the first time to publicly reveal that they're gay without fear of official retribution. Enlistees who tell military recruiters, or troops discharged under the ban who are eager to reenlist, will be eligible to join up if they are qualified. And the Defense Department says it will have zero tolerance for anti-gay behavior, as it does for religious, racial and gender discrimination. For Hackbarth, 44, the repeal presents some long-awaited opportunities. First, he can finally tell one of his male coworkers the real reason why he wants him to stop making gay jokes. "It'll be an eye opener for him, when I can turn to him and say, look, this is the situation and I don't appreciate any of it," Hackbarth said. He can also stop playing what gay troops call "the pronoun game," or referring to a fictitious "she" or "her" in his life. Hackbarth's 22-year military career almost ended in 1996 when an angry former boyfriend threatened to out him to commanders. Now that the Department of Defense officially repealed the ban, some servicemen and women may choose to draw attention to themselves, but many may not. As Ed O'Keefe explained: Dozens of conversations with gay rights advocates and current and former troops suggest that they're not expecting a wave of "coming out" announcements or gestures by active-duty or reserve troops. Some troops and activists said, however, that at least a few service members are likely to use "Repeal Day" as a way to draw attention to themselves. Some troops started celebrating the change in policy over the weekend. According to one soldier who e-mailed from Kuwait after ending a tour of duty in Iraq, "We fully expect to see an official repeal come in time for our landing in the United States." The soldier, who asked that he not be identified publicly before the ban officially ended, said he celebrated the impending change with his new boyfriend, who is also a soldier, by drinking non-alcoholic champagne bought from a Starbucks at Kuwait's Camp Virginia."There's actually quite a few conversations about it here and there," the soldier said. As far as coming out publicly, "I'm not planning on anything flashy," he said. "I don't plan on letting a lot of people know, as I still want to keep that part of my life personal."

One of the most contentious issues about Don't Ask, Don't Tell's repeal has revolved around marriage equality. Though at least one branch of the armed services, the Navy, said it would allow gay marriages after the discriminatory law's repeal, which happened on September 20th, officials later said "no go" to such events.  Now, the Pentagon announced today that military chaplains are free to preside over same-sex nuptials, both on and off government bases.  Some members of Congress have objected to military chaplains performing same-sex unions, saying it would violate the 1996 Defense of Marriage Act.  The Pentagon says a military chaplain may officiate at any private ceremony, but isn't required if it would conflict with his or her religious or personal beliefs.  The Pentagon also says Defense Department property may be used for private functions, including religious and other ceremonies such as same-sex unions, as long as it's not prohibited by state or local laws. Meanwhile, in related news, outgoing Joint Chiefs Chairman Mike Mullen told NPR's Steve Inskeep that there have been no problems since DADT's repeal, though admits there are still many wrinkles to be ironed out, especially in terms of normalizing benefits.  "The question I get is about benefits. And there are some benefits, clearly, that are -– that accrue to the change which has already taken place, and there are other benefits which are brought up which are directly tied to DOMA, which is the Defense of Marriage Act, which is a law in the country -– and we follow the law," he said.  "And until -– if and when that changes –- I mean, we'll follow whatever law is out there. Right now -– so there are benefits that DOMA has tied up by virtue of what -– the details that it specifically lays out and so until that changes, there's not going to be any change to the benefits."

Visit our "Support Groups" Community of Lights and our video collection on the "Trevor Project" for the prevention of gay teen age suicide and our collection of videos on the "It Get's Better" campaign.