From 3-D Printing to 3-D Handwriting

Researchers at the University of Illinois at Urbana-Champaign made a new type of liquid metal ink that stays liquid in a pen, but dries after being applied to paper, wood or another surface. The liquid consists of silver nano-particles that were reduced in size using acid, and then modified with cellulose so the fluid has a more inky viscosity. Draw a line, and when it dries, the result is a silver wire that can conduct electricity. Researchers built an LED display with their school's initials, UIUC, and the lovely sketch below depicting a house and trees. The ink serves as wiring for the LED mounted on the roof of the house, and it's powered by a five-volt battery connected to the edge of the painting, according to a UI press release.

While 3-D printers can also create customized circuitry, a handheld pen is a cheaper, more portable method, materials scientist Jennifer Lewis said. There's no software required — just a steady hand. The pen would enable circuits to be drawn on small, oddly shaped surfaces, and it can work as fast as someone can move his or her hand. The team folded the paper to see how the circuits would up and found they needed to be folded several thousand times before the lines were broken, according to via PhysOrg. 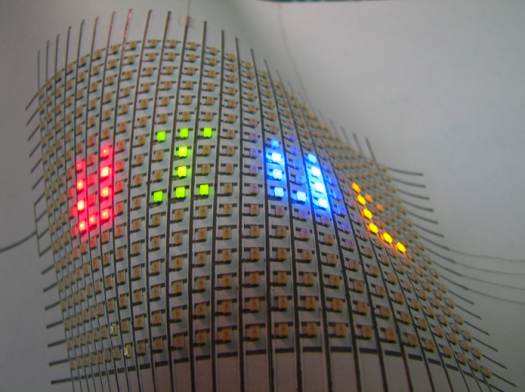 The circuit pen could enable new disposable, bendable electronics and folded 3-D objects, the researchers said. They want to expand their palette to other types of conductive materials, according to UIUC. The ink research, which was funded by the U.S. Department of Energy, was described in an early online version of the journal Advanced Materials.

For more information you can read the article published by the University of Illinois Research group in The Journal of Advanced Materials.