75th Anniversary of "Gone with the Wind" The Novel

The Pulitzer Prize novel was adapted into an Academy Award-winning 1939 film of the same name. It is the only novel by Mitchell published during her lifetime. It took her seven years to write the book and a further eight months to check the thousands of historical and social references. The novel is one of the most popular books of all time, selling more than 30 million copies. Over the years, the novel has also been analyzed for its symbolism and treatment of archetypes. The southern belle is an archetype for a young woman of the American old South upper class. The southern belle's attractiveness is not physical beauty, but rather lies in her charm. She is subject to the "correct code" of female behavior. Scarlett O'Hara, the protagonist of the novel, charming though not beautiful in the novel, is a southern belle.

"Gone with the Wind" has been adapted several times for stage and screen, most famously in the 1939 film starring Clark Gable and Vivien Leigh. On stage it has been adapted as a musical Scarlett (premiering in 1972). The musical opened in the West End followed by a pre-Broadway tryout in 1973, with Lesley Ann Warren as Scarlett O'Hara. The book was again adapted as a musical by the same name which premiered at the New London Theatre in 2008 in a production directed by Trevor Nunn. The Japanese Takarazuka Revue has also adapted the novel into a musical with the same name. The first performance was in 1977, performed by the Moon Troupe. It has been performed several times since by the group, the most recent being in 2004, performed by the Cosmos Troupe. There has also been a French musical "Autant en Emporte le Vent", based on the book.

At first, selecting a title for the novel was a problem for Mitchell. She initially titled the book "Pansy," the original name for Scarlett O'Hara. Although never seriously considered, the title "Pansy" was dropped once Macmillan, the publisher,  persuaded Mitchell to rename the main character. Other proposed titles included "Tote the Weary Load", "Baa! Baa!" Black Sheep", "Bugles Sing True", "Not in Our Stars", and "Tomorrow is Another Day," the latter taken from the last line in the book; the publisher noted that there were several books close to the same title at the time, so Mitchell was asked to find another title. She chose "Gone with the Wind". The novel's protagonist, Scarlett O'Hara, also uses the title phrase in a line in the book: when her home area is overtaken by the Yankees, she wonders to herself if her home on a plantation called "Tara," is still standing, or if it was "also gone with the wind which had swept through Georgia." More generally, the title refers to the entire way of life of the antebellum South as having "Gone with the Wind."

On June 30, 1986 the U.S. Post Office issued a 1-cent stamp honoring Margaret Mitchell on the 50th anniversary of the day her epic novel, "Gone with the Wind", went on sale. 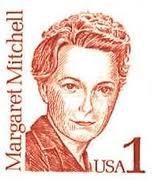