Doctoral student Amir Haluts is researching the unusual and dangerous sex lives of golden orb-weaver spiders. Imagine a two-dimensional enclosed space, where a murderous female ruler sits in the center. Contestants are thrown into the ring, and they seem puny compared to her, but one of them manages to overcome his competitors to maneuver in behind her without her noticing, and wins the right to potentially mate with her. This could be the plot of a bloody reality show – or a Squid Game challenge – but it's actually the way of life of the golden orb-weaver spiders (Trichonephila), common in Africa, South America and the Far East.

The fearsome females of the species spin large webs on which the males climb. They all strive to reach a particular point behind her – and wait for the right moment, when she’s distracted – to mate with her. While they’re approaching the female, the males are in grave danger. She is massive compared to them and can gobble them up with ease – and occasionally, that’s exactly what she does. This behavior has been documented in a new study in which patterns shared by particle physics have been identified in the spiders’ behavior. It is the first time that a physics-based model has depicted the dynamics of competition over resources among animals. The findings were published in the Journal Proceedings of the National Academy of Sciences of the United States of America. 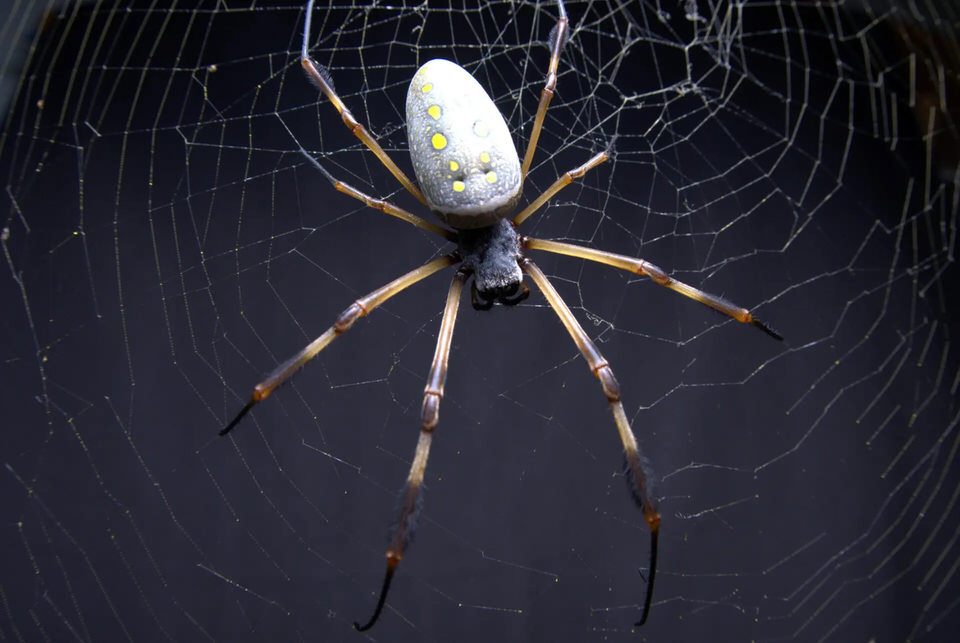 A Female Golden Orb-Weaver Spider in Her Element, at the Center of the Web

According to one of the article’s authors, Prof. Nir Gov from the Chemical and Biological Physics Department at Weizman Institute of Science in Rehovot, the idea for the study came during a meeting with Dr. Alex Jordan of the Max Planck Institute of Animal Behavior in Germany, in 2017. “The encounter was very interesting and a little scary, because he took me to see giant female spiders in his laboratory and the tiny males that he released onto their webs,” Gov says. 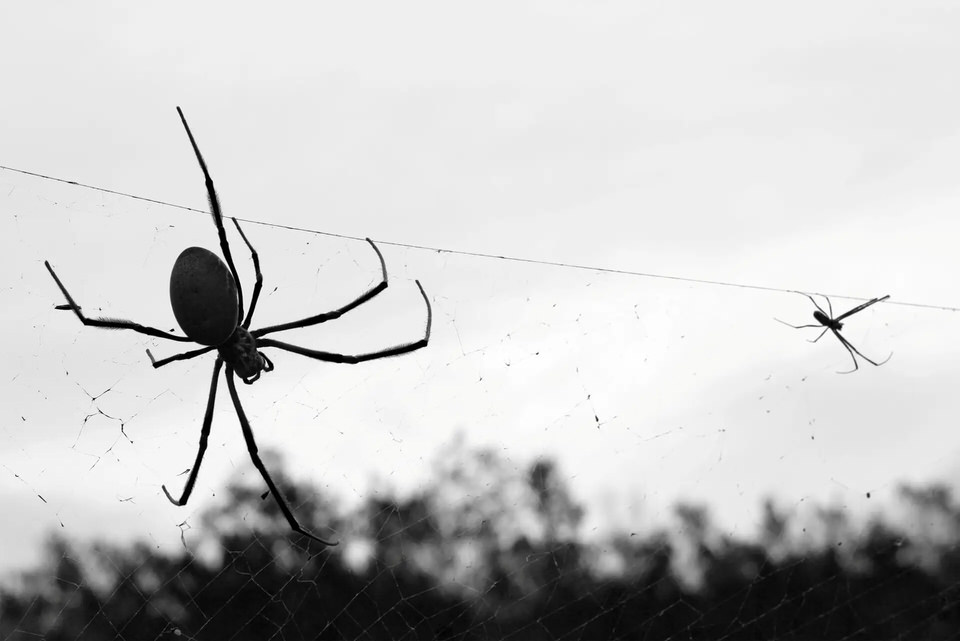 The researchers observed that the females remain in the center of the web, where they barely move, while the males are the ones to advance. They decided it would be interesting to try to depict the behavior of the males on the web in terms of physics. “We thought that the female is sort of like the nucleus of an atom, and the little males are like electrons. They are attracted to her but repel each other, because they are competing with each other,” Gov says. 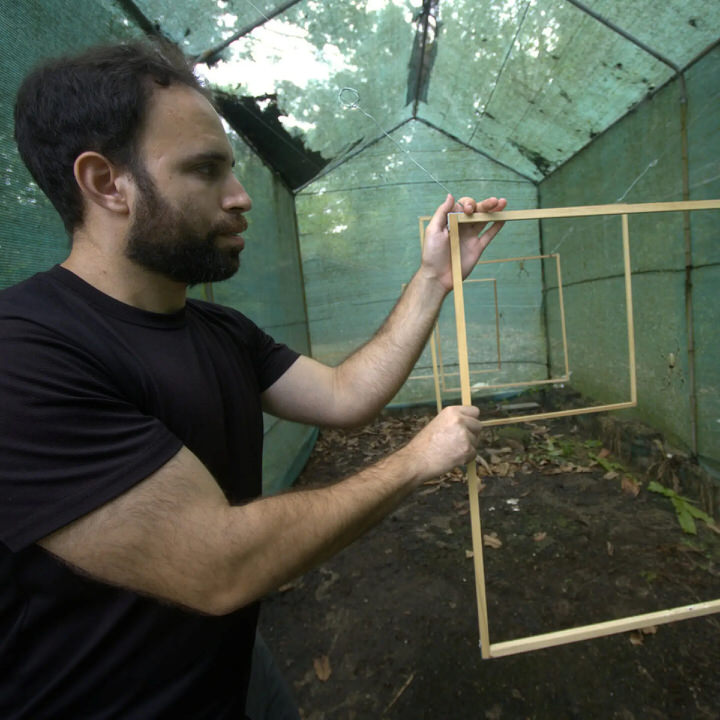 Doctoral student Amir Haluts turned the idea into a full-blown physics model. He followed the movements of the males on the web, in relation to each other and to the female, and described the trajectories he identified in mathematical terms. 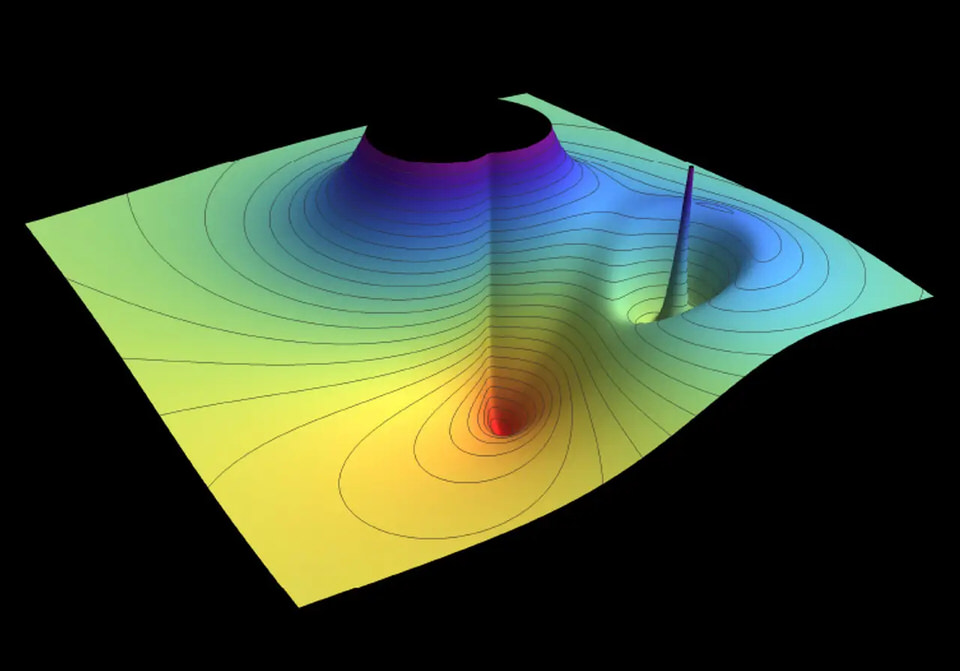 The Physics Model that Describes the Spiders' Behavior

The 'valleys' are areas of attraction, while the 'mountains' are zones of repulsion. Credit: Visualization: Amir Haluts Because all of the males want to reach the same point, a conflict arises among them over a very precious resource – a location near the female that will ensure their evolutionary survival. Haluts discovered an interesting phenomenon: Despite the competition among them, in some cases, the males will behave as if they attract each other and move towards their rival. 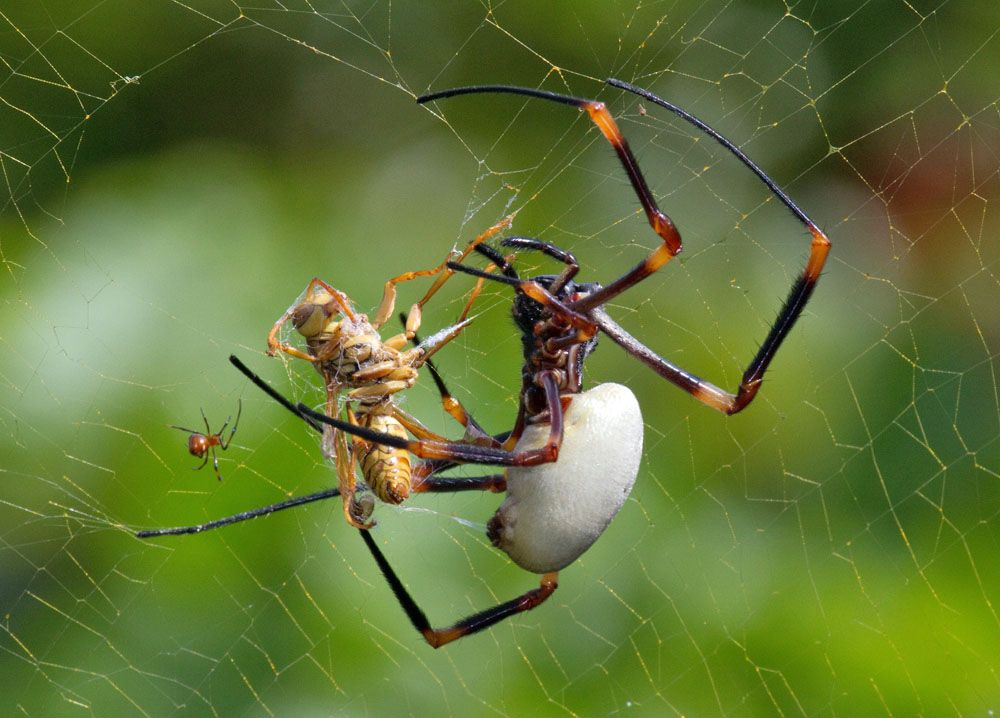 That is, the dynamics between them is more complex than relationships between electrons or other particles, among which there is usually only attraction or repulsion. When the male spiders are far from one another, they repel each other. But beyond a certain threshold, they realize that they will have to make contact in order to resolve this conflict – and decide who leaves and who wins. At this point, they are trapped in a “battle,” a momentary state in which all their attention is focused on one another, until one emerges victorious. 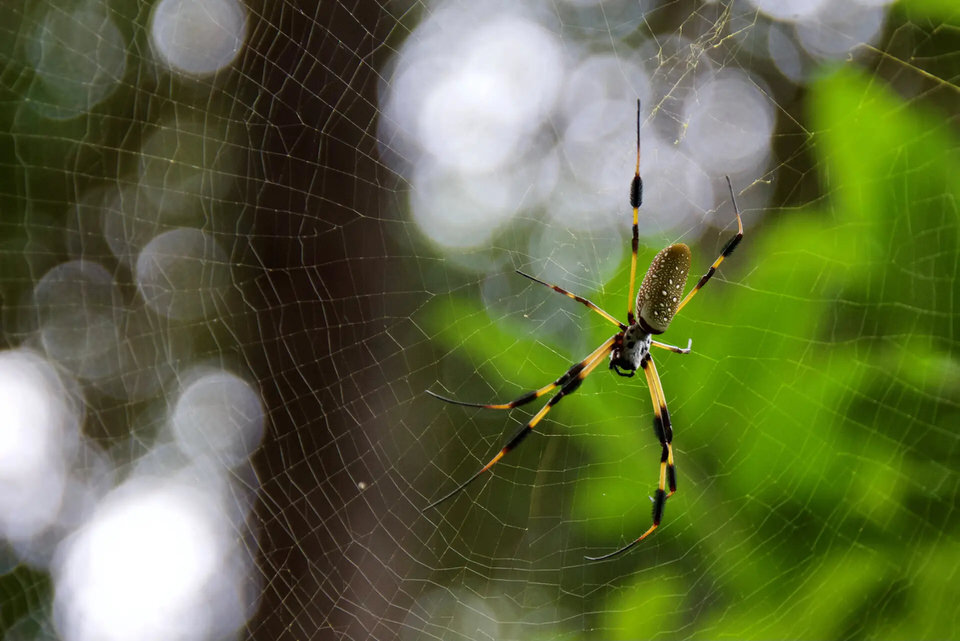 The researchers analyzed videos of the spiders’ behavior, and used them to encode the forces of attraction and repulsion in a model, according to their size and the distance between them. “It’s like formulating a law of nature out of their trajectories, the speed of their movements and the distance between them,” Gov explains. The results made it possible for them to predict the males’ real-life movements. 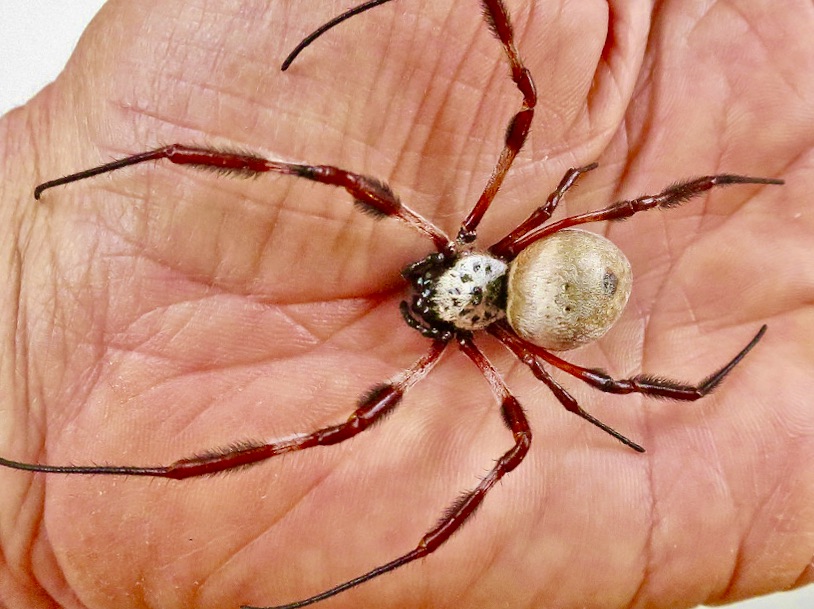 Male Spiders Sacrifice Legs to Placate Cannibalistic Lovers:   For tufted golden orb weavers, losing a leg is better than losing their life. Some male spiders sacrifice their own front legs to their female love interests to keep them distracted long enough to get busy. A new study has found that a male tufted golden orb weaver spider will offer a female one of his front legs to snack on during sex, most likely to appease her and increase his chances of both successfully mating and escaping (relatively) uneaten. “We have good evidence for this idea that it is a pacifying thing,” said Jutta Schneider, a behavioral ecology professor at the University of Hamburg in Germany and one of the co-authors of a recent studyabout the behavior published in Animal Behaviour. “[The offering] would give the male more time and peace to copulate.” 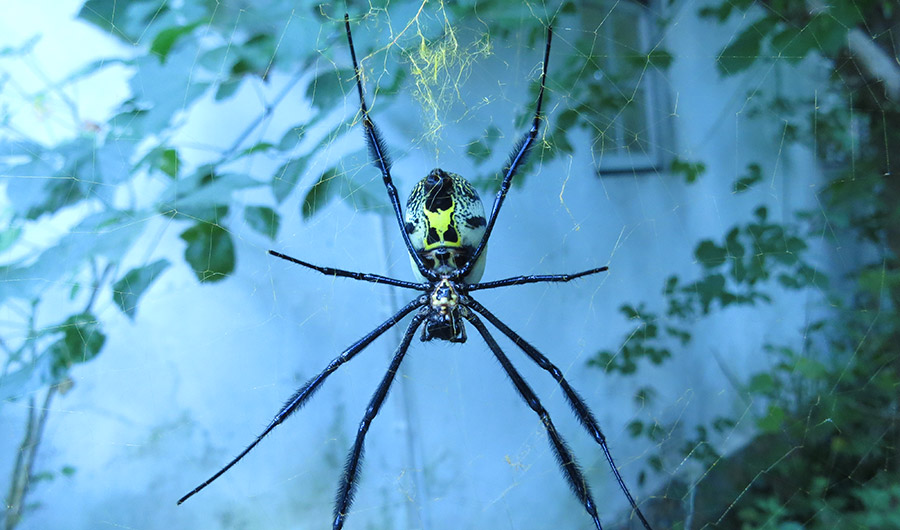 Tufted golden orb weavers (Trichonephila fenestrata) live in southern Africa. The males are much smaller than the females, and typically only mate with one female in their lifetime, partly because they don’t always survive the post-copulatory pillow talk and partly because their sexual strategy can preclude giving love a second chance. These males have two modified tubular organs called pedipalps that they place in one or both of the females’ two genital openings, sequentially. They then break them to deliver the sperm and act as a genital plug that blocks other males from subsequent mating attempts until the female has laid her eggs.

Researchers have long known that spider males of many species are opportunistic maters. Often smaller than their aggressive and sometimes cannibalistic female counterparts, males sometimes jump in and mate with a female distracted by a meal. But Schneider and her colleagues had observed that the male tufted golden orb weaver spiders took the initiative by offering females one of their front legs to feast on, actively casting it from their body (a process called autotomy) during copulation and continuing their business while she ate. Schneider and her co-author designed experiments to test if this was actually a mating strategy. An earlier study had shown that females that were busy feeding wouldn’t eat attempted suitors. 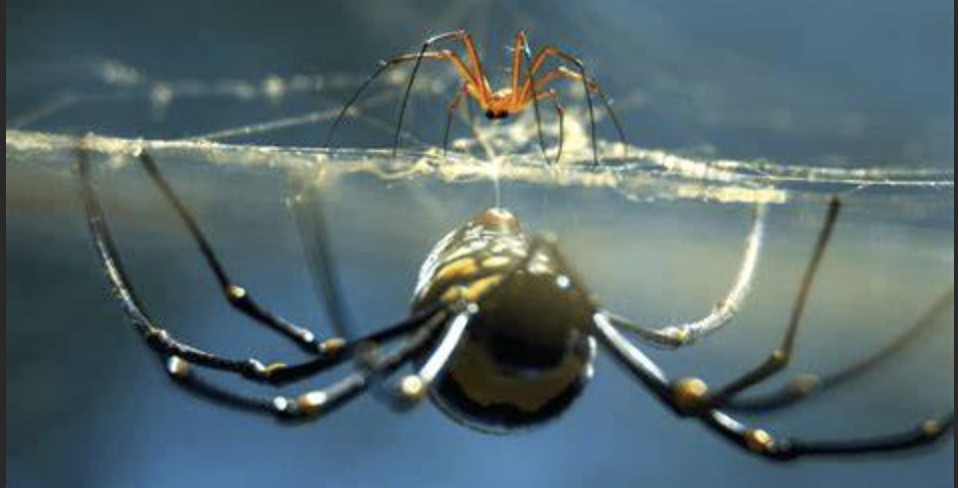 The researchers conducted a new test to see first whether females had a particular thing for male legs. They found the females accepted male legs more often than similar-looking legs from insects. The researchers thought there might be some sort of coating or chemical attractant that draws the females to the males’ legs and even did a test offering legs washed with a solvent and those without, but it seemed to make no difference. “It looks like a stick, there cannot be much in there to provide nourishment,” Schneider said, adding that they are still unclear why the females chose male legs. To show that the males are giving up their legs strategically, the researchers did another experiment in which they gave the females legs from males at the right moment, when the male was trying to mate with them. They observed that the females who had been offered a leg were significantly less likely to attack the males. “Spiders do a lot of weird and wonderful things in the name of sex,” said Catherine Scott, a postdoctoral biology researcher at Acadia University in Wolfville, Canada, who was not involved in Schneider’s study but who studies spiders. “I think it’s cool.”

But the new study is important because it was backed up by lab experiments, he said. And unlike some species that will sacrifice body parts just to survive, it seems to show male tufted golden orb weavers do it for a combination of benefits -- the offering could increase their chances of mating and may also help them survive the encounter. “It’s quite extreme for any organism to sacrifice part of its body,” Emberts said. Scott points out that it could be worse. Male redback spiders sacrifice their entire body to females to mate, essentially giving their lives as a nuptial gift. “[Sacrificing a leg] seems like a better idea because he survives,” Scott said of tufted golden orb weavers. “It speaks to the great variety of ways that male spiders do really interesting and sometimes kinky things in order to successfully mate with females.” But there is still a cost. Even if the female doesn’t eat the rest of the male after copulation, he still usually sticks around to ward off other males attempting to mate with her.  “They are little fighting machines,” Schneider said. But already down one or two of legs, “this male has nothing to lose.”