Over the course of his iconic career, the artist known as Christo has navigated extraordinary logistics in order to wrap buildings and bridges in his signature colorful fabric. He and his wife Jeanne-Claude have battled Colorado ranchers, New York mayors, and the elements. But Paris’s famed war memorial, the Arc de Triomphe, proved another matter entirely. Before opening “L’Arc de Triomphe, Wrapped” on Sept. 18, Christo had to deal with delays spurred by birds nesting in the monument and a global pandemic. Then, the artist himself died in May. The artist’s team said they felt compelled to push on. 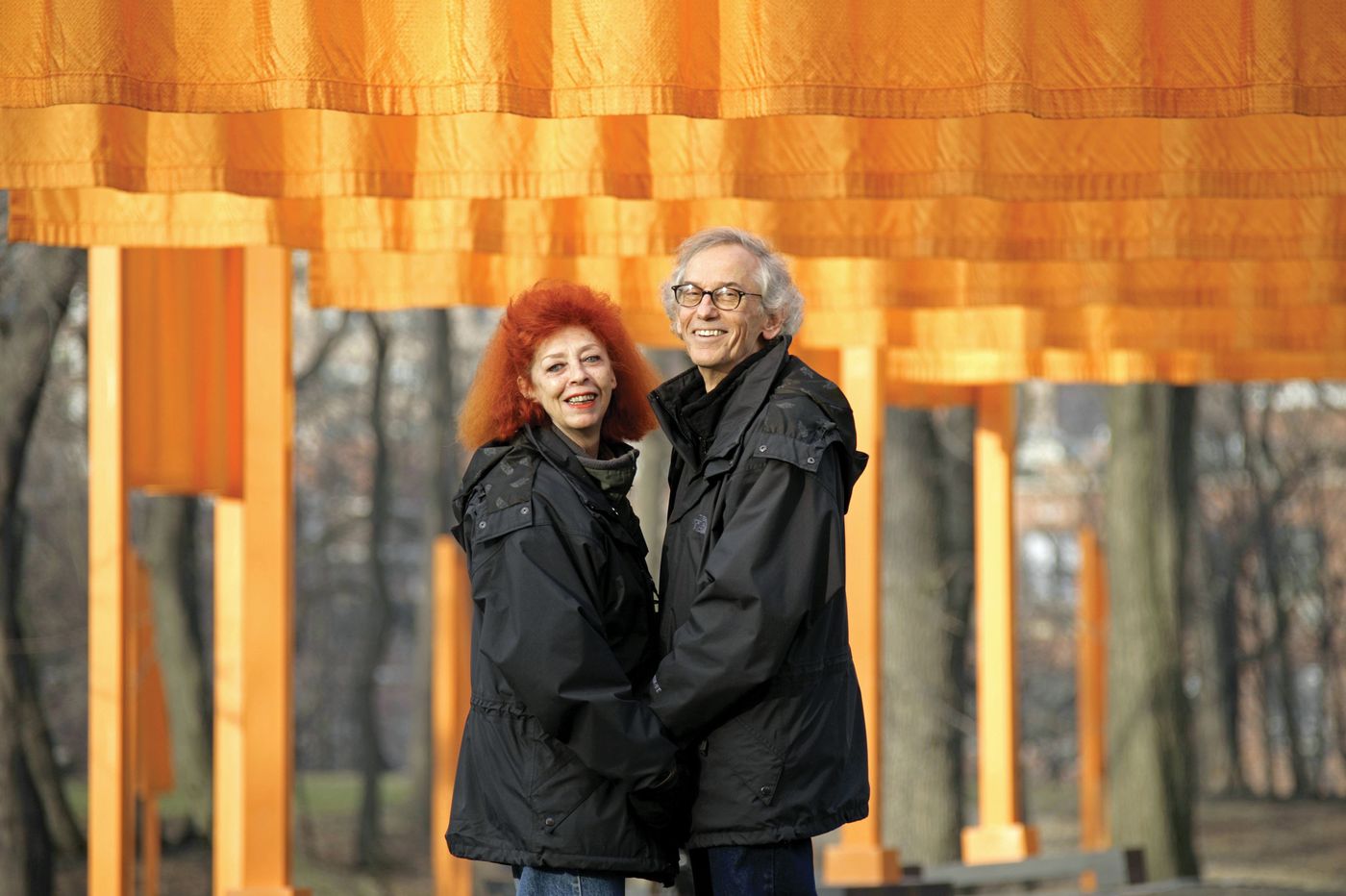 “Christo made me promise I’d finish it, and I’m relieved I could,” said Vladimir Yavachev, the artist’s nephew and project director. Christo initially had the idea to swath the arch in 1961 a few years after the young Bulgarian emigree moved to Paris, but he and his wife lacked the artistic or political clout at the time to secure permission to pull off such a feat; instead, they focused on wrapping smaller objects like toy horses and stacking oil barrels in unusual configurations. 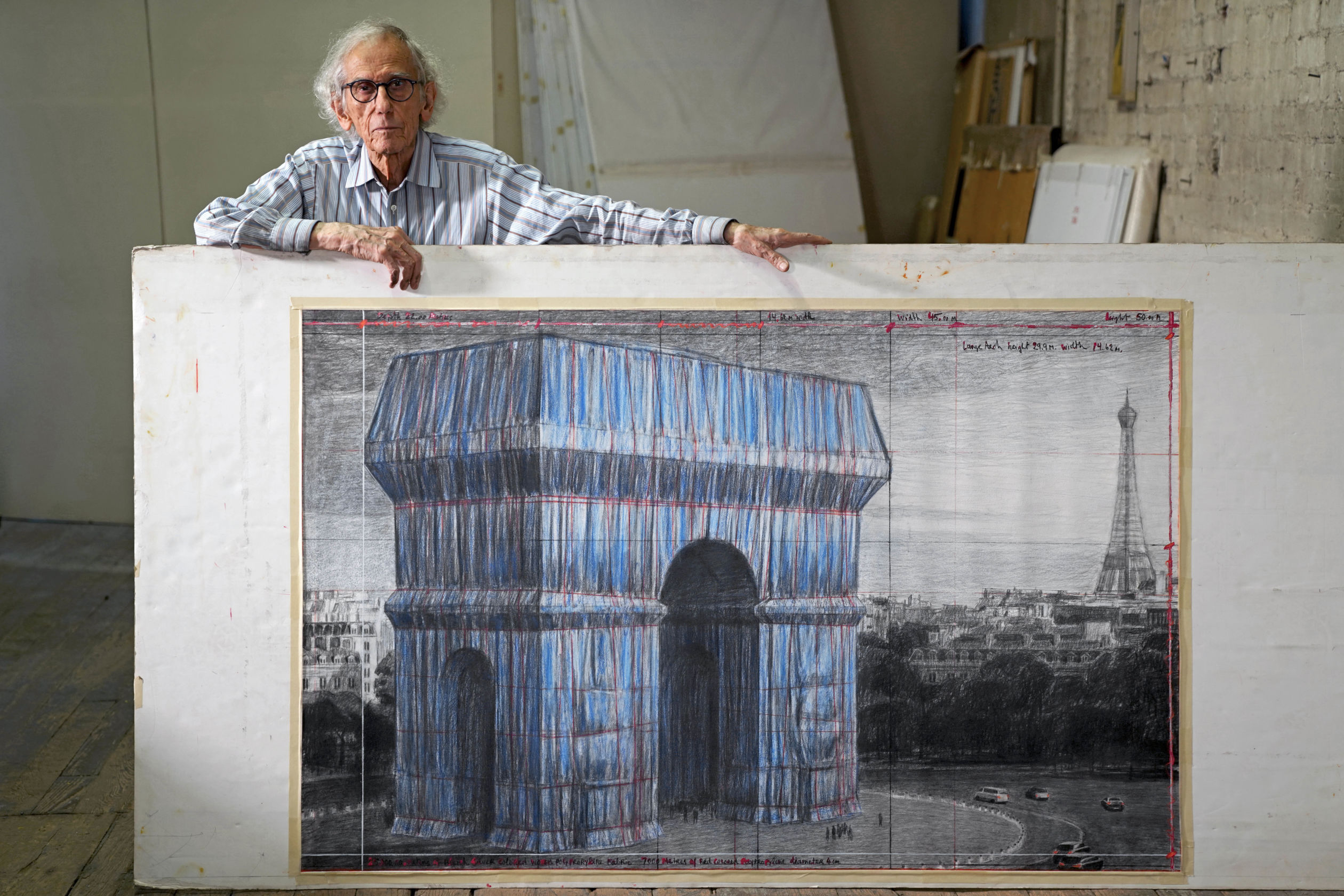 Now, the project that could cap their careers has less than a week to go before it is unveiled. Their team has already finished attaching around 400 tons of steel to the 15-story monument to cage and buffer its Neoclassical friezes and funereal reliefs. This will keep the structure from rubbing against the 270,000 square feet of silvery blue fabric that rappellers will drape it in—and tie down using nearly 10,000 feet of red rope. The effect will billow out the boxy silhouette of the arch, as though “the Arc just took a deep breath,” said Mr. Yavachev. 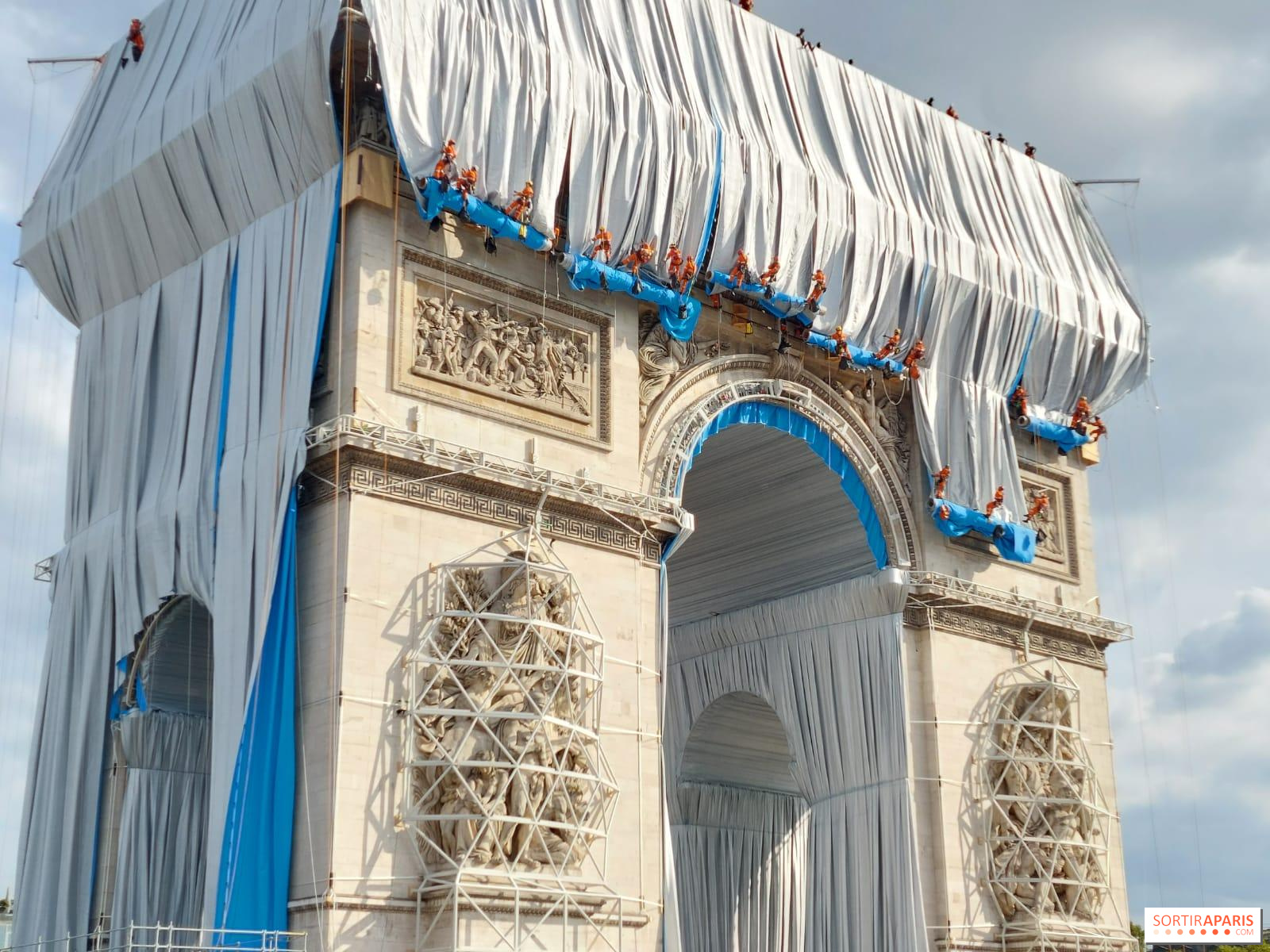 The project amounts to a poignant exhale following Christo’s death at age 84 in May 2020 and his wife’s death 11 years earlier. It’s also shaping up to be one of the most anticipated events of the fall art season. Not since the public art duo planted saffron-colored “Gates” all over New York’s Central Park in 2005, or built “Floating Piers” atop Italy’s Lake Iseo in 2016, have audiences had the chance to see their signature, draping style at this oversize scale.

“L’Arc de Triomphe, Wrapped” will remain up until Oct. 3, with the traffic that typically encircles the monument in Place Charles de Gaulle redirected elsewhere on weekends, allowing audiences to get close and easily walk around it, organizers said. Covid-related restrictions will be enforced, with workers taking visitors’ temperatures; a livestream will also allow people to log in and watch throughout. 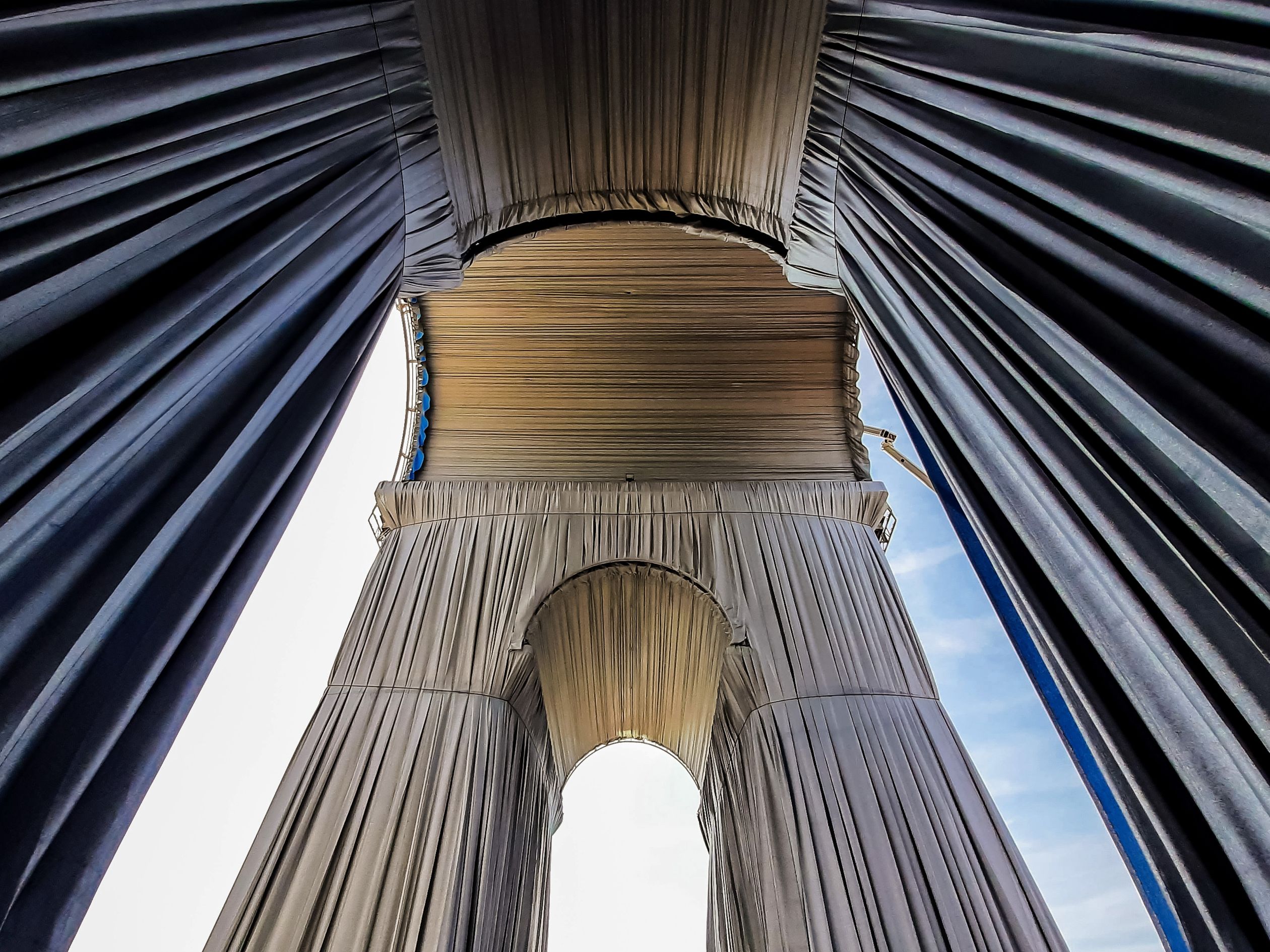 the Landmark Parisian Monument Under Silvery and Blue Fabric

Elsewhere in the city, several exhibits will explore the artists’ work further, including a series of photographs mounted on the banks of the Seine by the city that will chronicle Christo and Jeanne-Claude’s career. Sotheby’s in Paris is also holding a selling exhibition of “The Final Christo,” featuring 25 pieces from the artist’s estate, including preparatory drawings he created to sell to help offset the project’s $16.5 million cost. 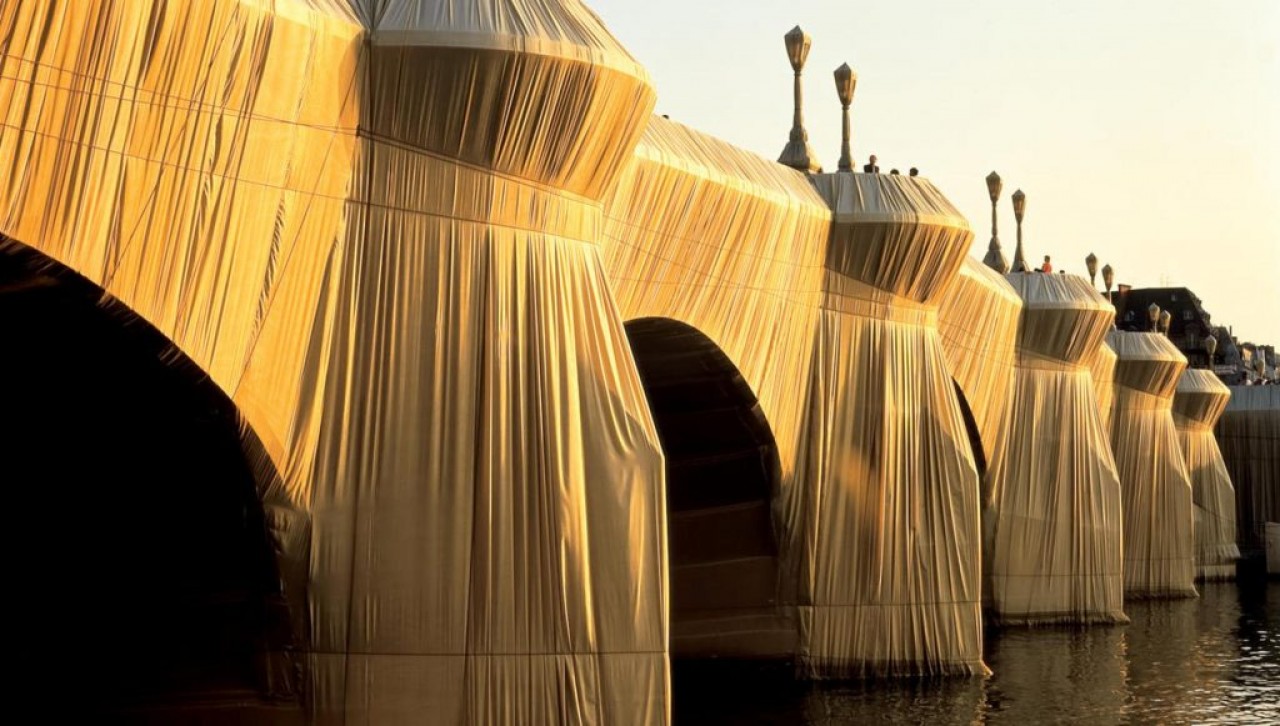 Christo’s long-dormant idea to wrap the arch was revived in 2017, when the Centre Pompidou invited the artist to wrap its own building to coincide with a show it was organizing that would explore the works he and Jeanne-Claude created between 1958 and 1964, when they lived in Paris. Instead, Christo demurred, mentioning his earlier idea to swath Napoleon’s victory arch, where the World War I-era Tomb of the Unknown Soldier resides. “The choice is striking because there are so many layers of history to that monument, and now they’re adding their own,” said Sophie Duplaix, a Centre Pompidou curator, said of the artists. “I think they’re asking us in a subtle way to appreciate the present.”

Ms. Duplaix said she braced for some pushback from locals since the monument is so revered. She also knew Christo had faced down wary officials in the past in order to complete his works. It took a decade before officials in Paris let him wrap the Pont Neuf bridge in 1985, and it took 26 years before he and Jeanne-Claude were given the green light to install “The Gates” in New York in 2005. One idea he had to suspend fabric panels above part of the Arkansas River was met with such virulent protest from Colorado ranchers, he eventually gave it up. 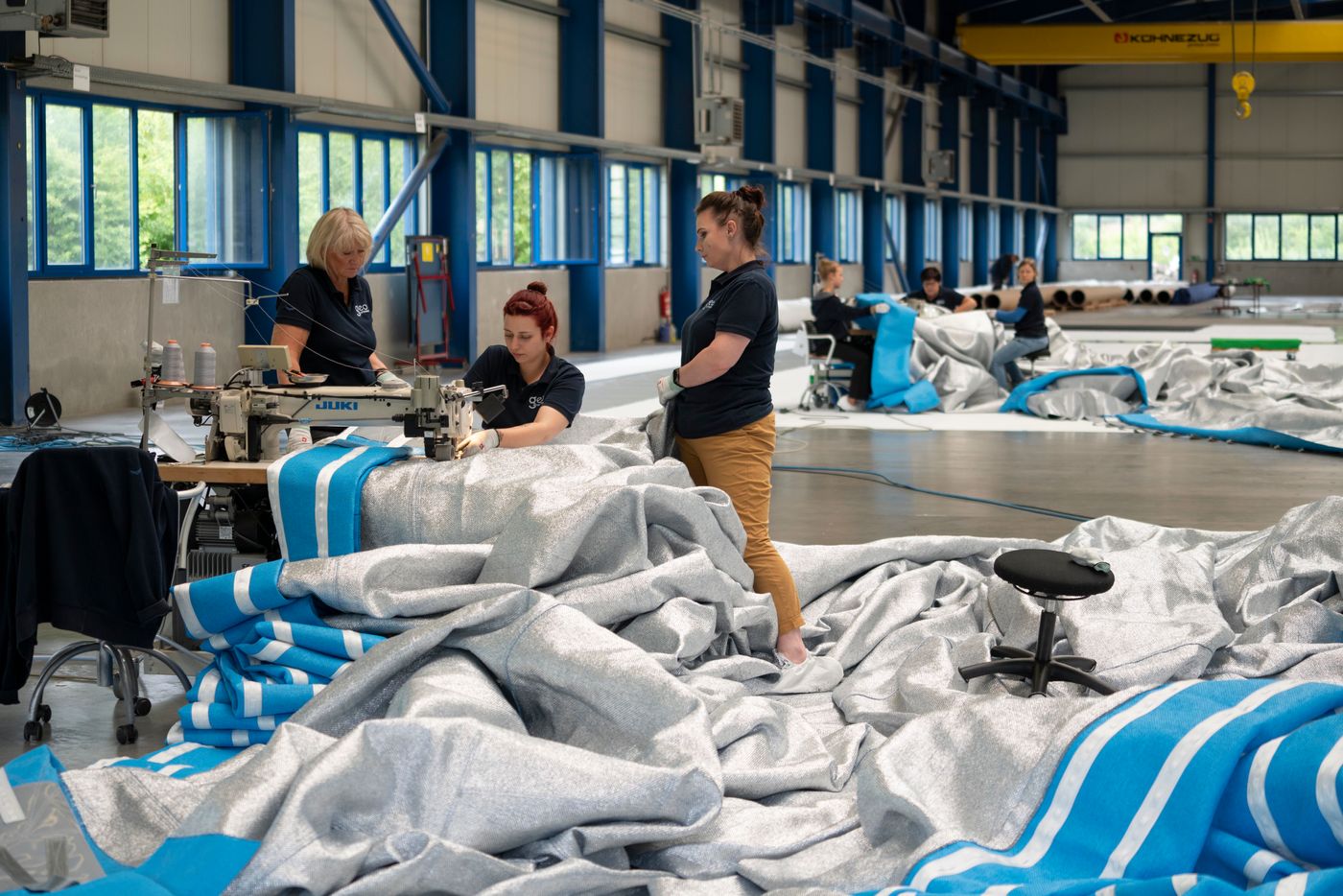 Permits wound up getting sorted smoothly this time around, thanks largely to support from President Emmanuel Macron and the Center for National Monuments. “But then came the kestrels,” said Mr. Yavachev. Turns out, a pair of falcons keep a nest high in the crevices of the monument, and France’s League for the Protection of Birds piped up when they learned that Christo had proposed to wrap the arch in April 2020. “The timing was in the middle of the breeding season,” said Yann Libessart, spokesman for the group, adding that they worried the birds wouldn’t be able to breed or feed their fledglings if their nest was enshrouded. Christo agreed to push his launch to fall 2020. 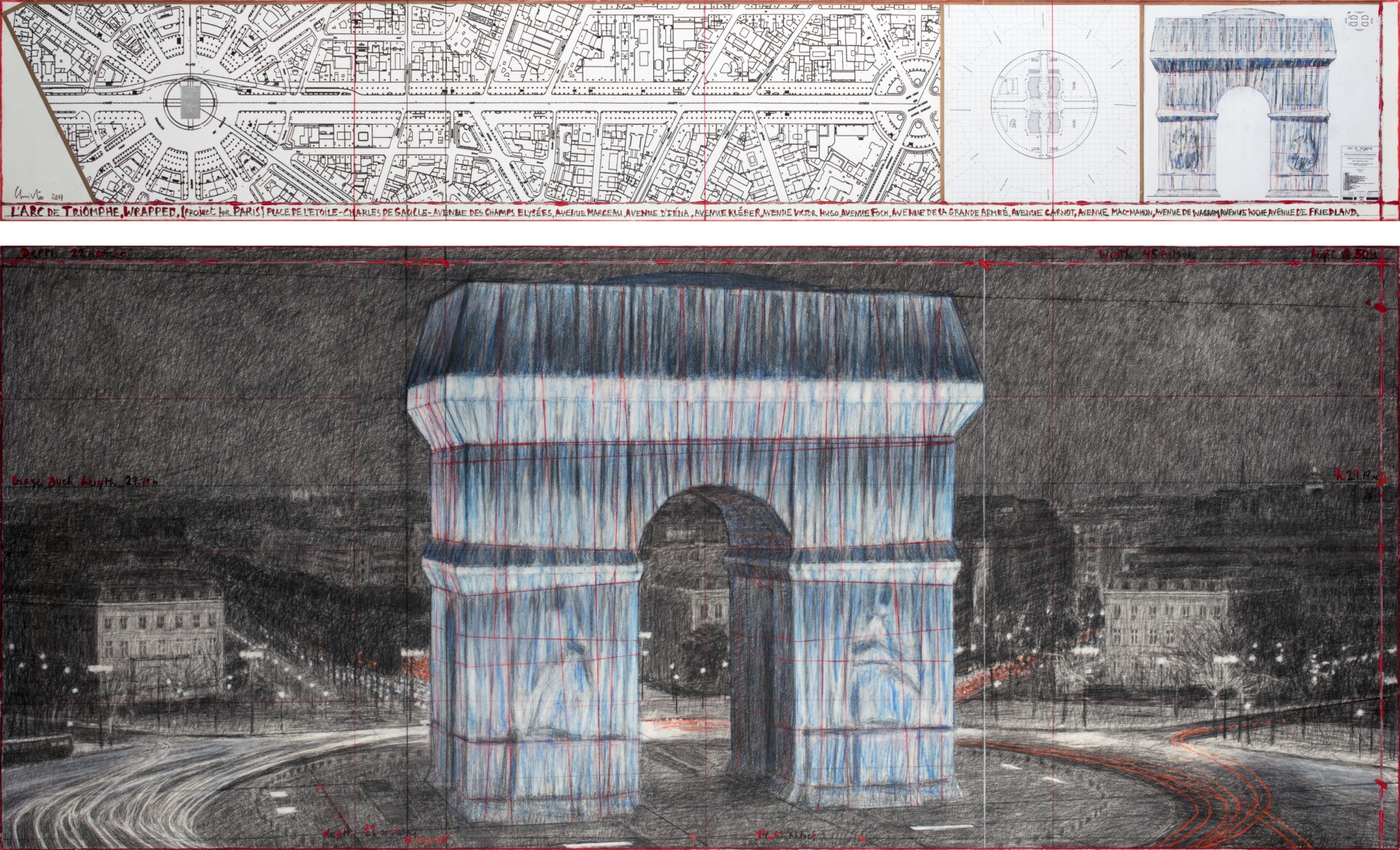 Then the pandemic hit and the timeline got pushed back by again, by a year. Christo died in the interim, after finalizing all his artistic choices, his studio said. Mr. Yavachev said his uncle relished troubleshooting these outsized projects, so installing “L’Arc de Triomphe, Wrapped” without Christo’s diplomacy and enthusiasm has proven bittersweet. Mr. Yavachev said he’s still pledged to complete one final project on the artists’ behalf in Abu Dhabi, though that timeline remains opaque. “Everybody grieves in their own way,” he said. “He was always so concentrated on getting the work done, and so am I. Once the Arc is finished, then I think it’ll hit us that he’s gone.”

Together with his partner Jeanne-Claude, Christo’s spectacular installations transformed the public’s perception of what art can be. In this latest Sotheby’s video, hear Sotheby’s Simon Shaw in conversation with Lorenza Giovanelli, studio manager and personal friend of Christo and Jeanne Claude. Discover how their private art collection was made up of memories and key moments in their life, telling the story of friendships, from thank you presents from Yves Klein, to tokens of affection from Lucio Fontana. Ahead of Sotheby’s upcoming auction, ‘Unwrapped – the Hidden World of Christo and Jeanne-Claude’ (February 17, 2021 in Paris), discover how the walls of their apartment told a life story of their personal connections through works by Andy Warhol, Claes Oldenburg, Marcel Duchamp, and many more.