Archaeologists may finally know the age and true identity of the “Rude Man,” also known as the Cerne Abbas Giant, one of dozens of geoglyphs etched into the British countryside. In March 2020, archaeologists traveled to a hilltop in Dorset, England, to bag a giant. They sliced into his elbows and feet, then took bits of him back to their labs in bags and metal tubes. No actual behemoth was harmed in the process, because the Cerne Abbas Giant is a geoglyph—a large artwork emblazoned into the landscape. The 180-foot-tall figure was created by scouring away grass to reveal the white chalk beneath, then packing the trenches with more chalk quarried nearby. Thanks largely to his 35-foot phallus, the giant has become a beloved fertility icon. According to folklore, couples who couple on his crotch will successfully conceive. 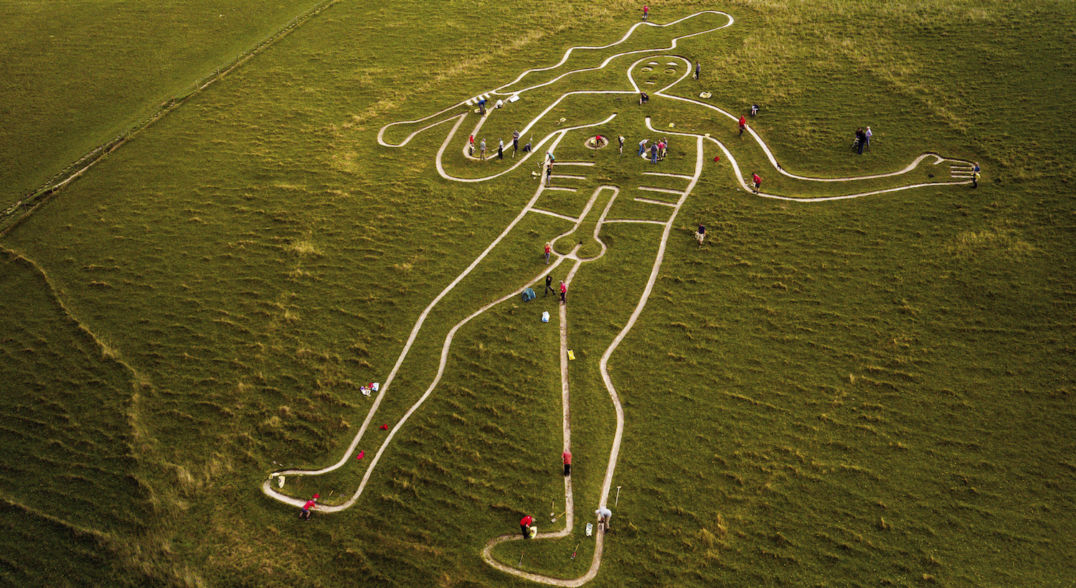 But this naked man has been clothed in mystery. Until this May, researchers debated whether he was an Iron Age fertility symbol, a Roman representation of Hercules, or a parody of 17th-century politician Oliver Cromwell. Now, using a combination of laser beams and snails, scientists established that the giant was born between A.D. 700 and A.D. 1100 in the late Saxon or early medieval period. The results were totally unexpected because no other chalk figures date from that time, says environmental archaeologist Mike Allen. “We were all wrong ... and that’s tremendously exciting.” Still, several questions remain about the “Rude Man” and about many of the other 30-odd chalk geoglyphs scrawled across Southern England. 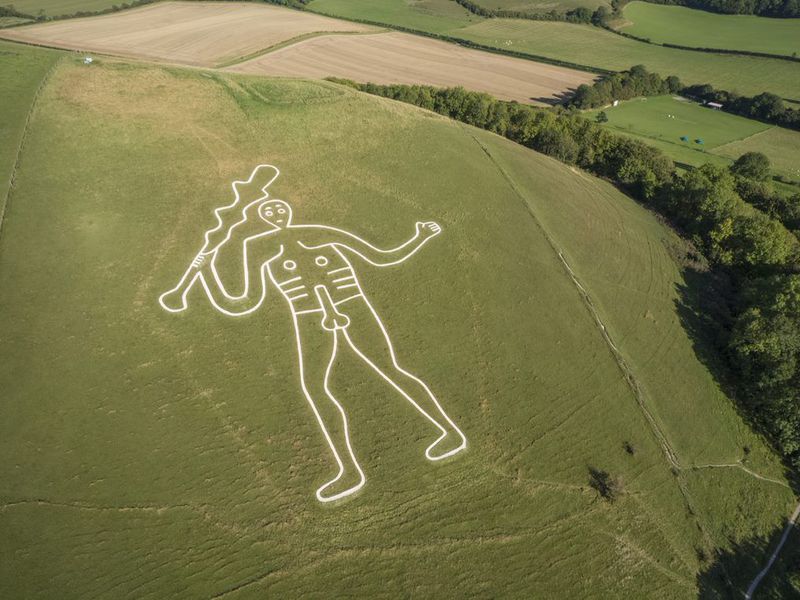 For millennia, people have used these grasslands as a bucolic blackboard, drawing horses, giants, war memorials, and even an oversized kiwi bird. Thanks to the chalky geology—formed in the time of the dinosaurs, when tiny marine creatures sank like snowflakes to the floors of inland seas—these figures are the only geoglyphs of their kind in the world. Yet surprisingly little is known about them. “They are iconic, and they are big tourist attractions,” Allen says. “And archaeologically, they are just a total enigma.” 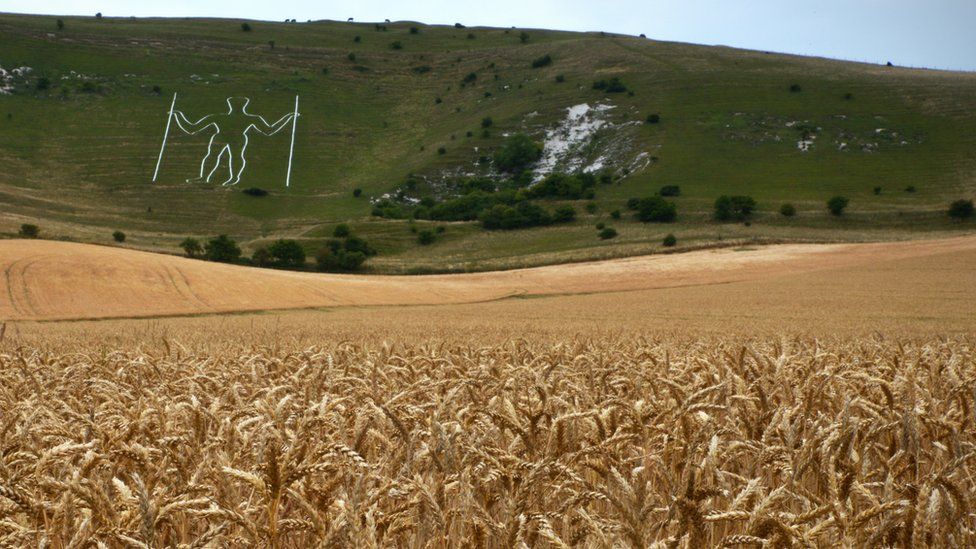 Every December, observers standing on Dragon Hill in Oxfordshire can watch a spellbinding spectacle unfold. The sun rises behind the Uffington White Horse, a 360-foot-long chalk geoglyph that seems to gallop across a hillside toward an Iron Age fort. Because of its low trajectory in midwinter, the sun then “appears to roll over the body of the horse [on the horizon] and make a gentle arc in the sky,” says Joshua Pollard, an archaeologist at the University of Southampton. For centuries, no one had any idea when people created this, or many other, mysterious geoglyphs, nor what they might represent. Yet generation after generation has painstakingly maintained them. If chalk figures aren’t weeded and rechalked, they grass over in about 20 years. History records many of these communal cleanings, which were typically followed by festivities like climbing a greasy pole and chasing a wheel of cheese down a hill.

Then around 30 years ago, it became possible to date the figures thanks to a new technique called optically stimulated luminescence (OSL). In the 1990s, archaeologist David Miles led a team to date the Uffington White Horse. The scientists took samples of the strata, focusing on the lowest layer of packed chalk and the original sediment beneath it. By shining a laser at the samples, researchers released trapped particles within. The concentration of these particles helps scientists calculate when a soil sample last absorbed the sun’s rays. In this case, the White Horse’s deepest layers last saw sunlight between 1380 B.C. and 550 B.C. At around 3,000 years old, the Uffington White Horse is by far Britain’s oldest dated chalk geoglyph. Archaeologists believe Bronze Age farmers used deer antlers and wooden shovels to scour the steed out of the turf. Pollard thinks the geoglyph is a sun horse—a common creature in ancient Indo-European cosmology that carries the sun across the sky like a chariot. The figure may have been the focus of winter solstice celebrations. 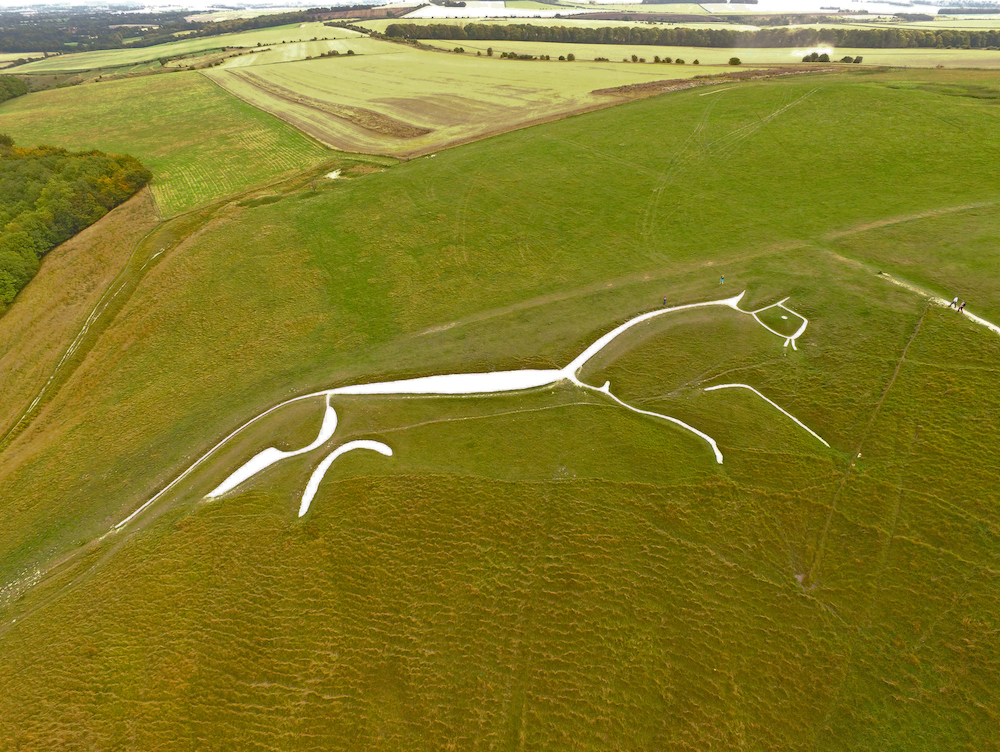 Among the U.K.’s Most Famous Geoglyphs is the 3,000-Year-Old Uffington White Horse

Other dating efforts suggest a huge age gap exists between the Uffington White Horse and most other geoglyphs, which generally date from the 1500s or later. It’s possible that other figures from the intervening years or ancient times have grassed over. Researchers know of about 60 historically documented geoglyphs that have disappeared. Another possibility is that the long period of social upheaval starting in the 1500s—including the Reformation and English Civil War—triggered a revival of geoglyph creation linked to patriotic, nationalist mythology. The Long Man of Wilmington—a 235-foot-tall chalk man holding a staff in each hand—may be one such symbol. In 2003, OSL dated the figure to roughly A.D. 1545, prompting archaeologist Martin Bell, from the University of Reading, to theorize the Long Man represents a mythical giant. “During that period, there was a big mythology about the role of giants in Britain’s origin myth,” Bell says. “That led to giants being depicted in other [chalk] hill figures which are described in historical documents but which have now vanished.” According to these legends, giants were the original rulers of Albion—an ancient name for Britain that may mean “white land” and refer to the chalky geology. Thanks to advancing technologies, Pollard says, “I think there’s potential to detect and rediscover other lost chalk hill figures.” Meanwhile, scientists continue to study the geoglyphs through OSL and a second, unexpected method: snail archaeology. 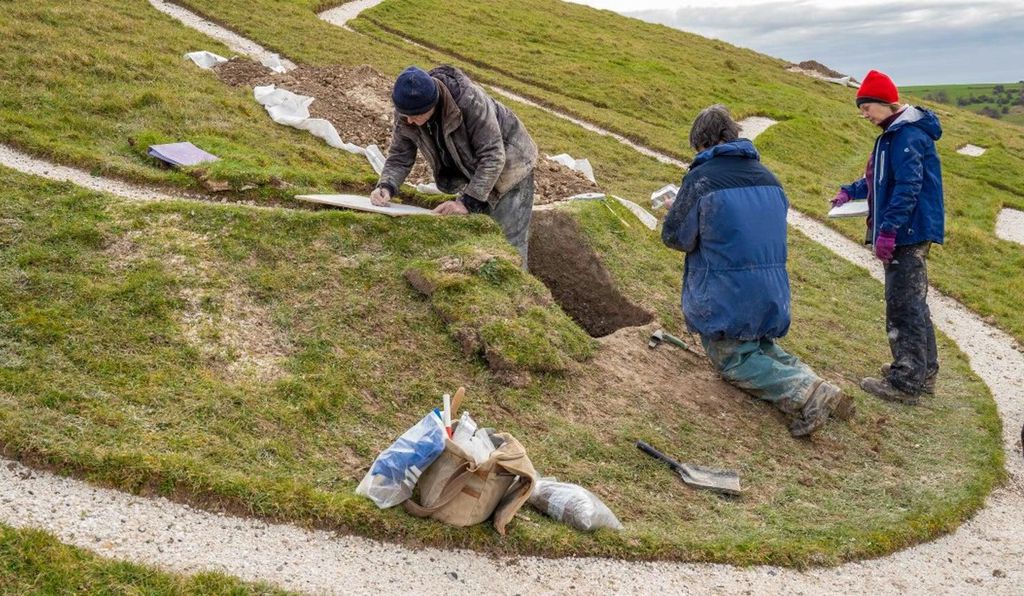 In the spring of 2020, environmental archaeologist Allen brought soil samples from the Cerne Abbas Giant to his lab and “made mud pies with them,” he says. He laboriously plucked out hundreds of half-millimeter-sized snail shell fragments and identified their species based on minute differences in whorl patterns, lines, and hair pits. Snails are not typically used as a dating technique, but Allen can roughly estimate when a geoglyph was formed based on historic snail migration. Around the first century, Romans imported certain fleshy snails to Britain to eat as escargot, whereas later snail species hitched a ride on hay packed into medieval merchant ships. In the giant’s earliest layer, Allen found two mollusk species regarded as medieval immigrants—Cernuella virgata and Candidula gigaxii. Those snails were not present in the soil that predates the geoglyph. So, last summer, Allen announced that the figure was probably medieval or later. The new OSL results pinpoint an early medieval timeframe, somewhat earlier than Allen expected but still overlapping with the presence of these snails.  The geoglyph may have grassed over—forgotten for years—before people decided to reawaken the giant. 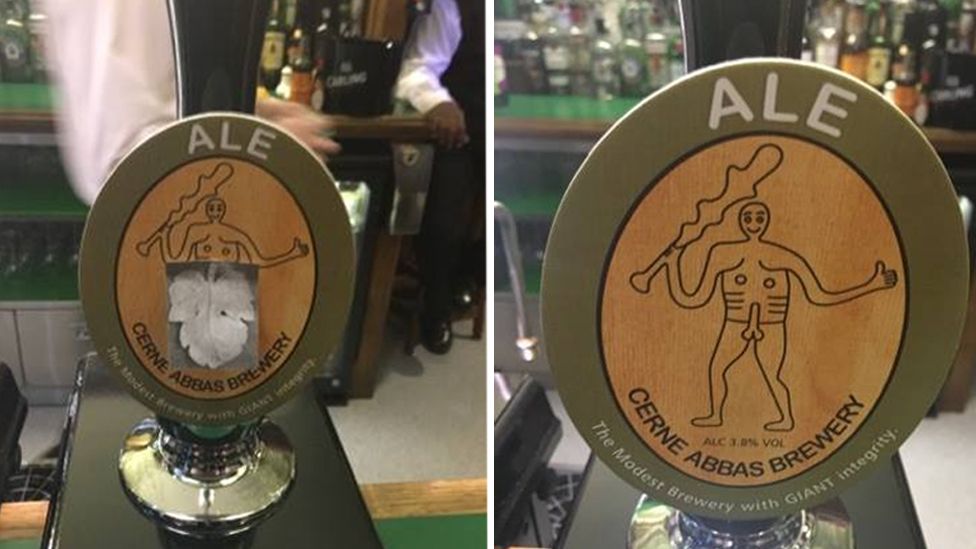 The new dates have sparked research efforts to uncover who the giant represents. Some researchers think the nearby Cerne Abbey was established in A.D. 987 to convert locals who worshipped a pagan god named Heil or Helith. So, the figure might depict that Anglo-Saxon deity, according to Martin Papworth, senior archaeologist with the U.K.’s National Trust. Interestingly, historic documents from Cerne Abbey don’t mention the giant until 1694. This leads Papworth to hypothesize that the geoglyph was forgotten and grassed over for hundreds of years before people saw a shadowy shape on the hillside and decided to reawaken the giant. 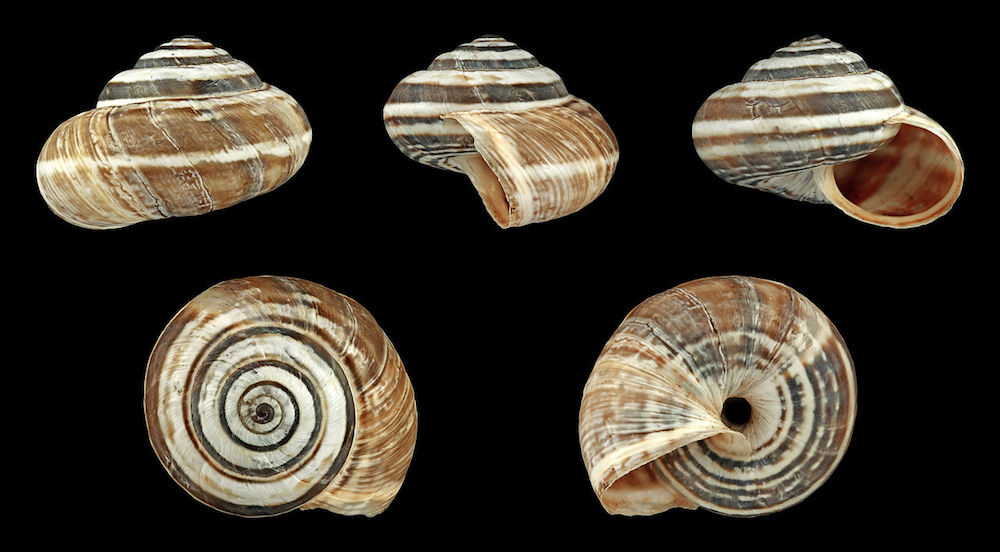 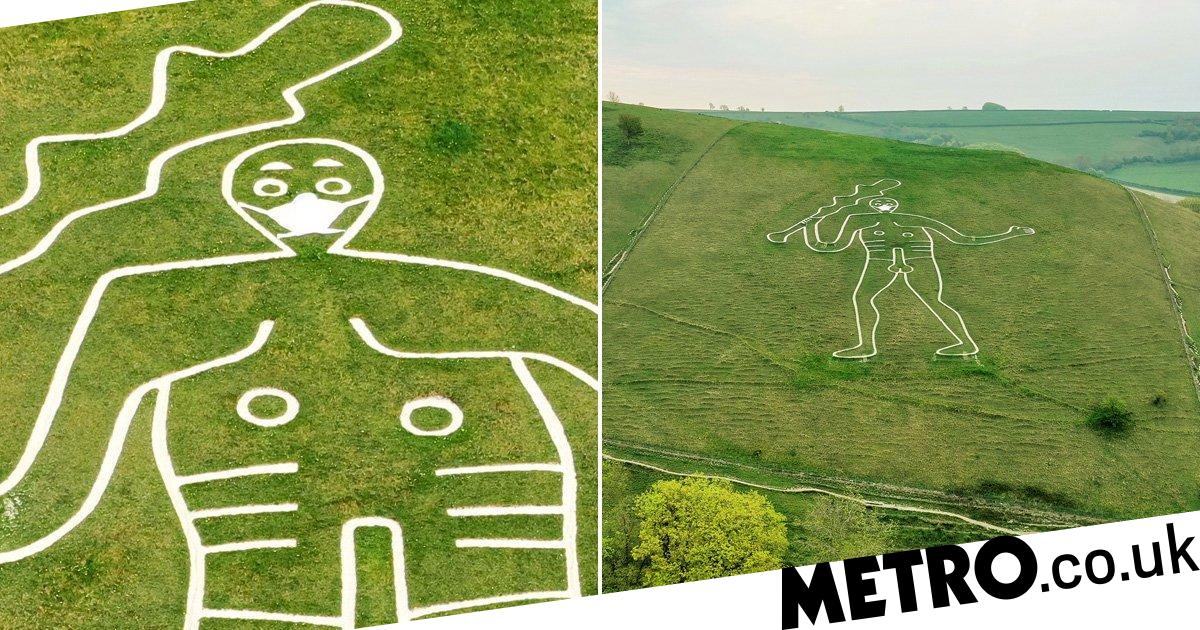 People have been chalking, rechalking, and changing the giant for centuries, so the archaeological material at the hillside runs deep, Papworth says. Evidence shows the figure may have once held a cloak and a severed head, and was emasculated and remasculated in Victorian times. More recently, it received a COVID-appropriate face mask.  That’s what makes these geoglyphs so enchanting. Many people think of art as the creation of a single artist at one point in time. The chalk figures are created and re-created communally and continuously. Each time, they may be altered slightly—or greatly. And because the meaning of many geoglyphs is unknown, each community can infuse them with ever-changing stories, even as they connect with the generations that carried on this tradition for thousands of years. 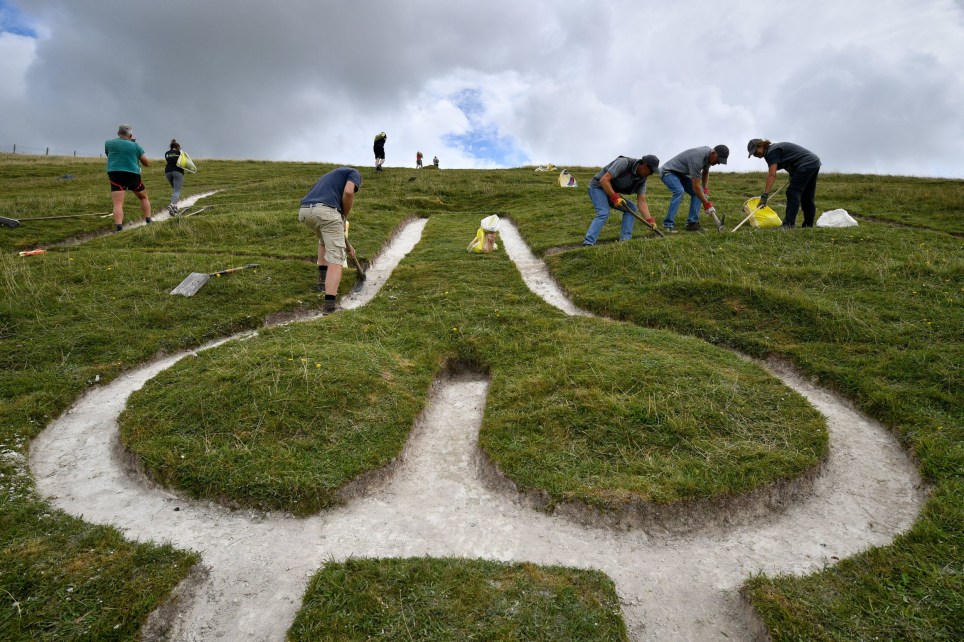 Cerne Abbas is not the only place to boast a giant on its hillside. Wilmington in East Sussex has its own "Long Man" - but he is a more modest sort than his Dorset cousin. For many years up until the 19th Century, the Long Man was only visible when the sun was in a certain position, but since 1874 its shape has been marked out in yellow bricks. The Sussex Archaeological Society describes him as "the mysterious guardian of the South Downs" and says there are many theories about his origin. Some are convinced he is prehistoric, others believe he is the work of an artistic monk from the nearby priory, which would date him from between the 11th and 15th Centuries. Roman coins bearing a similar figure suggest he belonged to the 4th Century and there may be plausible parallels with a helmeted figure found on Anglo-Saxon ornaments.   We may never know.