At 17,000 square feet, Sacha Jafri’s The Journey of Humanity (2020), an abstraction featuring drips, whorls, and splatters of various hues, is the world’s largest painting, as certified by the Guinness Book of World Records. This week, the grand canvas was sold for a fittingly epic price at an auction in Dubai. On Tuesday, March 23, 2021 "The Journey of Humanity" sold for $62 million at an auction held at Atlantis, The Palm hotel. The sale puts it among the most expensive artworks by a living artist ever sold at auction, and it is not far behind behind a $69 million Beeple NFT piece that sold at Christie’s earlier this month. Jafri’s plan had initially been to slice up the painting and sell it in 60 segments to raise $30 million to support “global digital equality.” Those paintings were intended to have been sold in four auctions. 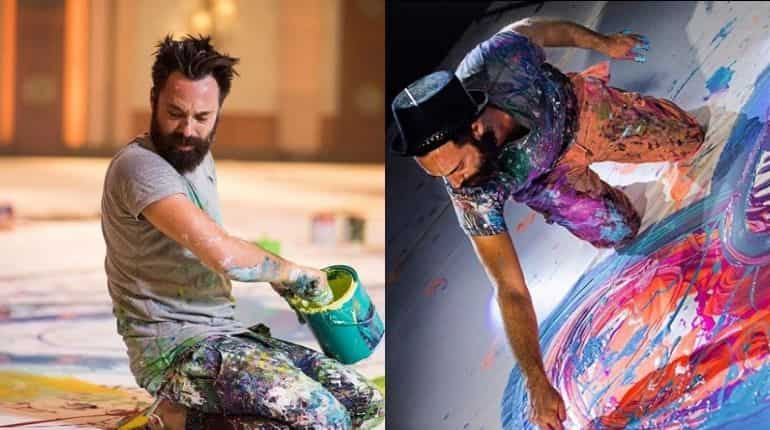 The painting took 24 weeks to complete and has four major sections. The painting will be hung vertically in Dubai's frame-shaped skyscraper and will be then projected onto the world's tallest building, the Burj Khalifa. It will then be cut into 60 separate pieces, measuring approximately 30 square meters each, to be framed and sold individually at an auction in Dubai. The Journey of Humanity is split into 70 framed sections spanning 1,595.76 sq metres (17,176 sq feet) – equivalent to nearly four basketball courts. 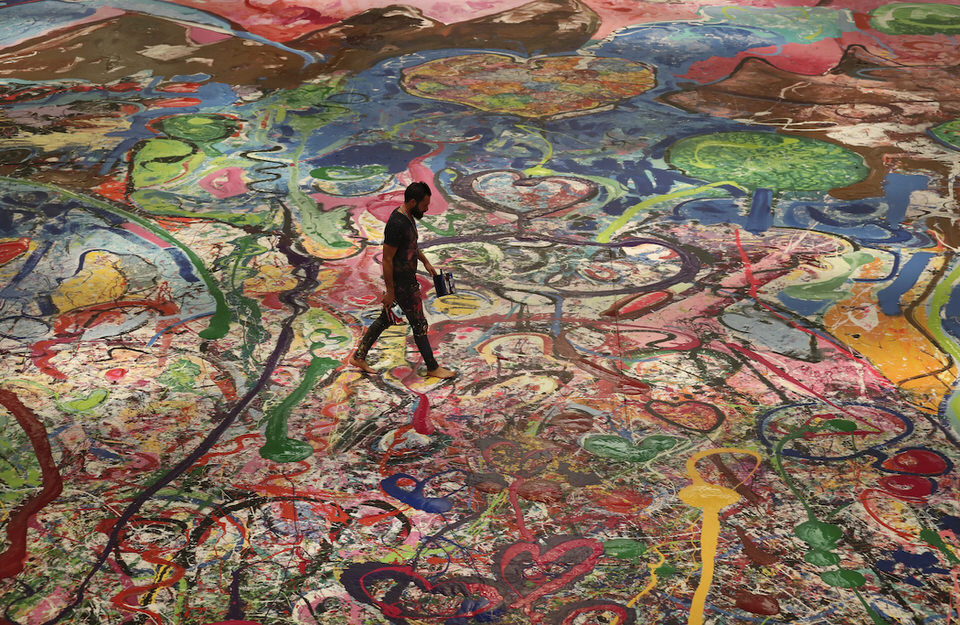 But the work instead ultimately sold as one, and it went to Andre Abdoune, chief executive of Altius Gestion International Holding, according to the Emirati outlet National. The proceeds will go a variety of organizations, including UNICEF, UNESCO, the U.A.E.’s Ministry of Education, and the Global Gift Foundation.

ARTIST'S VIEW DURING COMPLETION OF PROJECT

Jafri, who has not previously had a major presence at auction, painted The Journey of Humanity over the course of several months last year at the Atlantis. The resulting canvas includes more than 300 layers of paint and is the size of two football fields. He has previously sold his art to benefit charitable organizations, with actress Eva Longoria, musician Paul McCartney, and former U.S. President Barack Obama reportedly among his buyers. For Children by Children

The artwork features works submitted online by children from all over the world. The contributions were printed on paper and then incorporated into the painting by Jafri in eight concentrated "portals" on the canvas.  The money generated from the auctioning of this painting will be used to teach the underprivileged children all around the world. Jafri is aiming to generate close to $30 million by the sale of this painting. 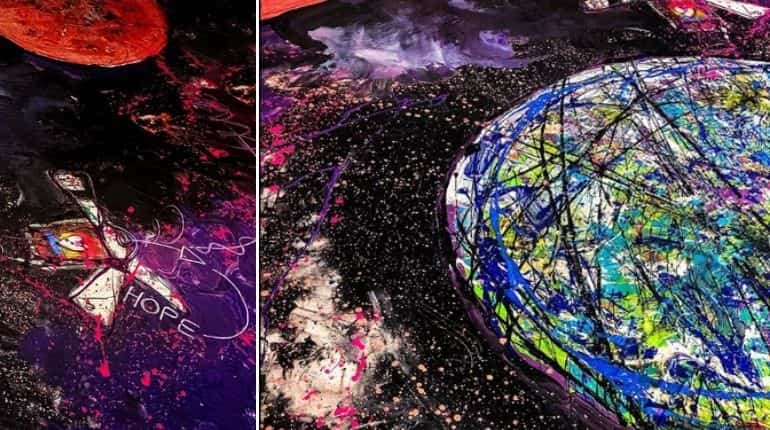 The painting also has a section for the 'Hope Mars Mission' created as the UAE Hope Probe and launched from Japan for Mars. The section was revealed the day the first signal from the maiden Arab inter-planetary probe in space was received. 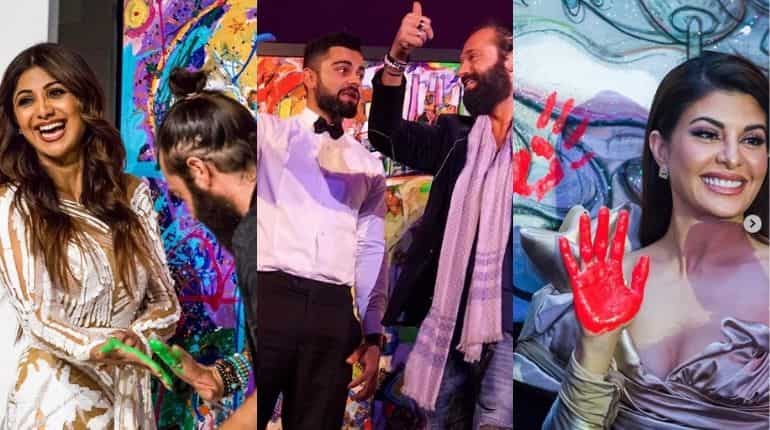 Jafri claims the project has already been endorsed by nearly 100 high-profile figures including Eva Longoria and Rita Ora. Indian celebrities such as Virat Kohli, Jacqueline Fernandez and Shilpa Shetty also lent support to the cause.

"THE JOURNEY OF HUMANITY"

Sacha Jafri  (British, born 1977) is a contemporary British artist whose large-format paintings fluctuate between abstraction and representation. His work melds themes of global politics, shared experience, and cityscapes. Jafri's practice frequently combines elements of curation and performance, as seen in his 2006 touring exhibition “Jafri Meets Warhol.” “I have various ambitions as a painter and they have to be fulfilled, otherwise I won’t feel like I’m living,” the artist has said. 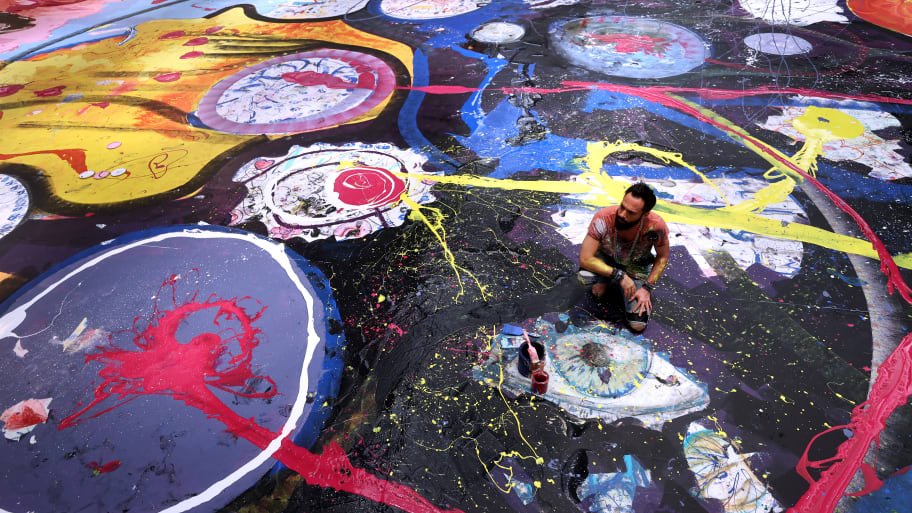 “I want to be remembered in 500 years, I want to be the Kandinsky of my time: that will take at least another 20 years. It’s more important to be poignant than to be commercial and sell paintings. Money is just to buy time.” Born in 1977 in the United Kingdom, the artist studied at Eton College where he received his MA in 1999. Shortly afterward, Jafri was awarded the 2000 British Painters Prize, marking the beginning of his rise to international prominence. His works have risen substantially in value, and are in the collections of Barack Obama, George Clooney, Kevin Spacey, and other celebrities. The artist lives and works in Dubai, UAE.