Tom of Finland's real name is Touko - because he was born on 8 May 1920, on the south coast of Finland, and May in Finnish is "Toukokuu". His homeland had been independent for just three years when Touko was born, and outside its few cities the country was still rough and wild. The men who worked in the fields and woods, the farmers and loggers, were true frontiersmen, every bit as rough and wild as the countryside. Tom of Finland died on November 7, 1991 at the age of 71. 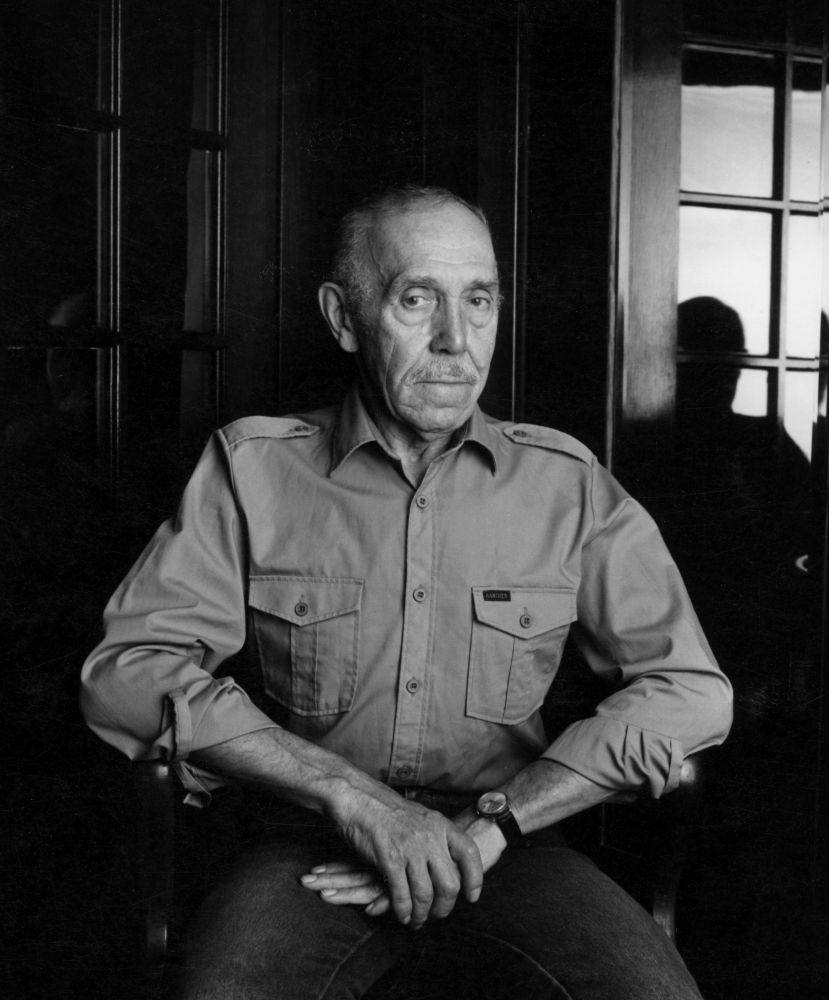 We celebrate this centennial to honor what this one artist contributed to humankind. Tom devoted his life, his artistic career that spanned over five decades, to the vision of Homosexuals being free to be happy in loving whomever they desired – and in turn, for all of society to be supportive of his view. In many parts of the world it’s not safe to be LGBTQ+, so there is still much work to be done. 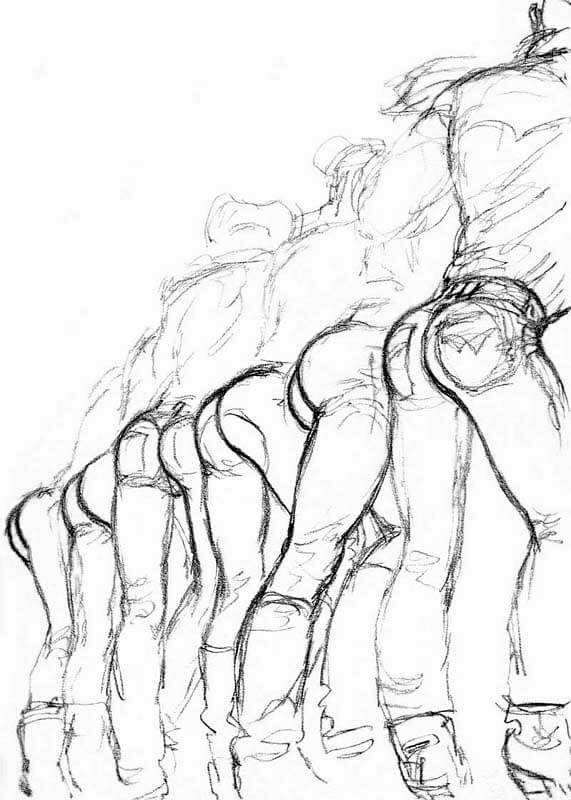 Touko grew up among those men but was not a part of their world. Both his parents were schoolteachers, and they raised Touko indoors in an atmosphere of art, literature and music. Obviously talented, by the time he was five he was playing the piano and drawing comic strips. He loved art, literature and music. But he loved those outdoorsmen even more. At that same age of five, Touko began to spy on a neighbour, a muscular, stomping farmboy whose name, "Urho", means "hero". Urho was the first in a long line of heroes to hold Tom's attention while he memorized every flex of their lean muscles, every humorous twist of their full lips. 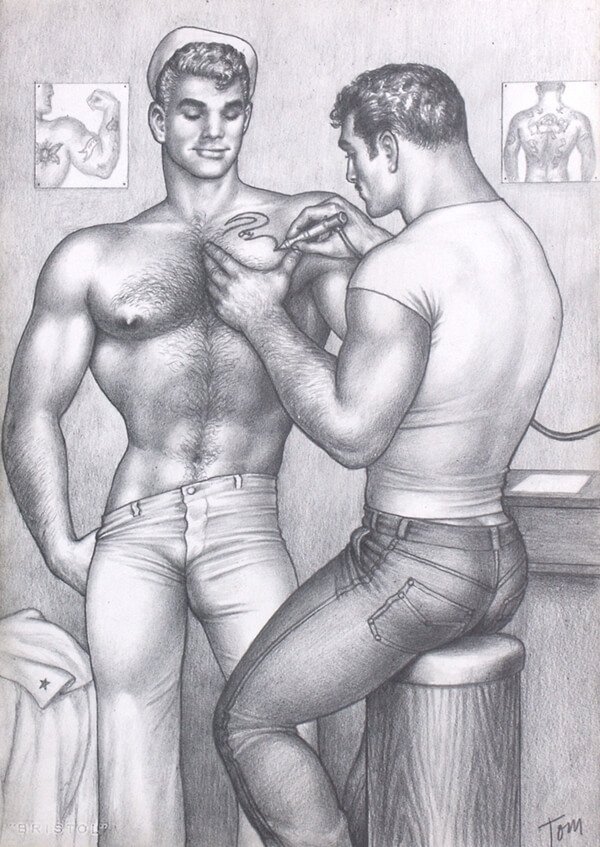 In 1939, Touko went to art school in Helsinki to study advertising. His fascination expanded to include the sexy city types he found in that cosmopolitan port - construction workers, sailors, policemen - but he never dared proposition them. It was not until Stalin invaded Finland and Tom was drafted into a lieutenant's uniform that he found nirvana in the blackouts of World War II. At last, in the streets of the pitch-black city, he began to have the sex he had dreamed of with the uniformed men he lusted after, especially once the German soldiers had arrived in their irresistible jackboots. After the war, Touko went back to studying art and also took piano classes at the famed Sibelius Institute. Peace put an end to blackout sex and uniforms became rare again, so Touko returned to his teenage practice of locking himself in his room, stripping naked, and stroking himself with one hand while the other hand created on paper what he could seldom find on the streets. 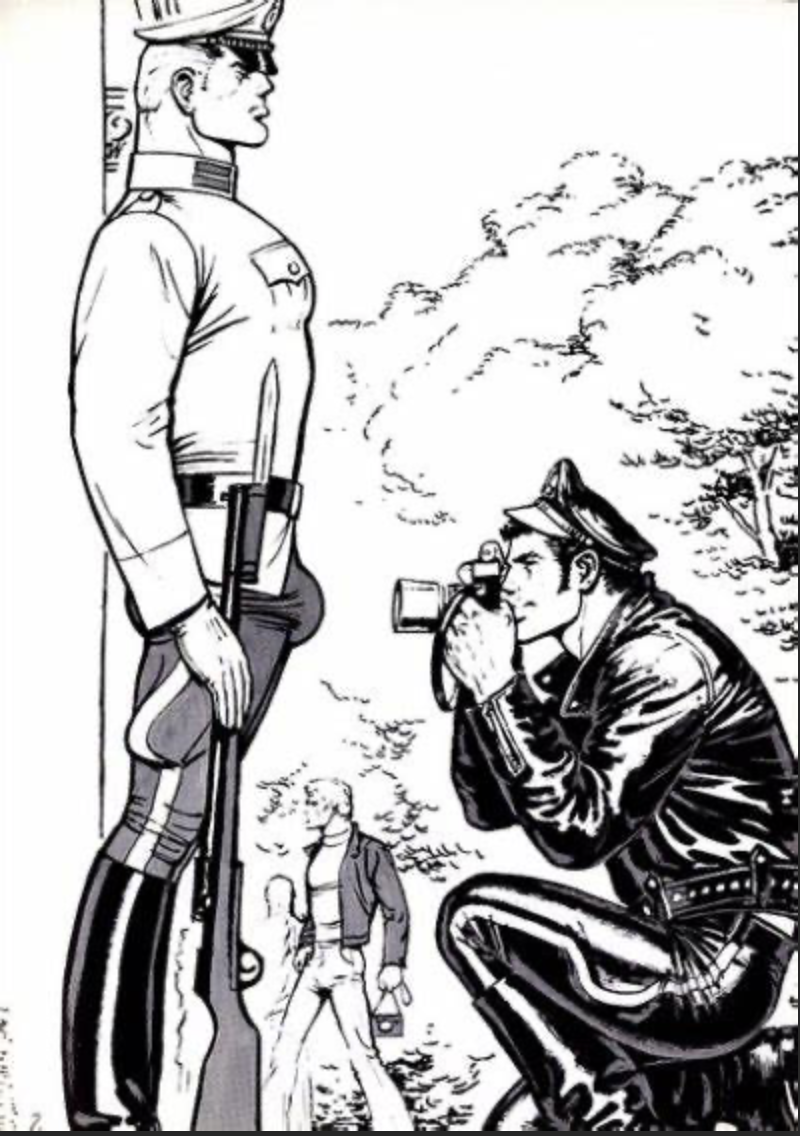 By day, he did freelance artwork - advertising, window displays, fashion design. In the evenings, he played the piano at parties and cafes, becoming a popular member of Helsinki's post-war bohemian set. He avoided the fledgling gay scene, because what were then called "artistic" bars were dominated by the flamboyant effeminacy typical of the time. He traveled frequently, becoming very familiar with the gay cruising areas found in every major city. Still, in 1953, when he met Veli, the man with whom he would live for the next 28 years, it was on a street corner a few blocks from home. 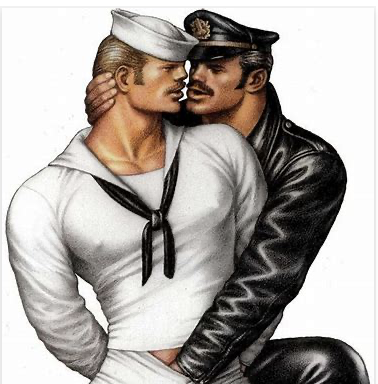 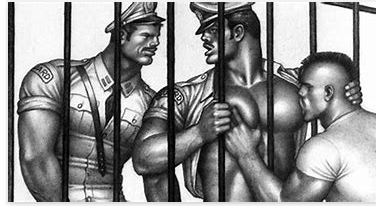 1973 was also the year of Tom's first art exhibition, in Hamburg, Germany, but that experience was so negative (all but one of the drawings were stolen) that it would be 1978 before he would agree to another exhibit, in Los Angeles, for which he made his first trip to America. Over the next couple of years, a series of exhibitions in Los Angeles, San Francisco, and New York, with trips to America for each one, turned the shy Helsinki artist into an international gay celebrity with friends the like of Etienne and Robert Mapplethorpe. The business end of his career was taken up by a Canadian American, Durk Dehner, and under his capable management Tom at last had financial security. In 1981, Tom's lover, Veli, died of throat cancer; at the same time, the AIDS epidemic began to hit hard the very cities and circles of friends he had so recently come to love in America. Still, throughout the Eighties, the trips to America continued to increase until Tom was spending six months in L.A. with Durk Dehner for every six he spent back in Helsinki. After emphysema was diagnosed in 1988, Tom was forced to curtail his beloved traveling but continued to draw. 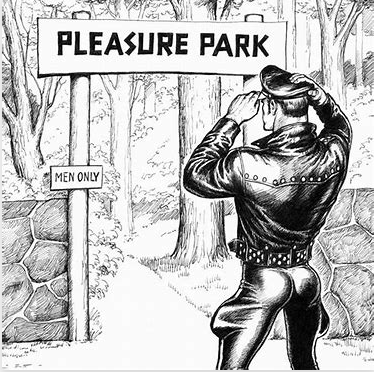 When the disease, and the medication, made his hand tremble too much for him to execute the finely detailed work for which he had become famous, Tom switched back to a childhood favourite, pastel, executing a richly coloured series of nudes in that medium almost up until his death from an emphysema-induced stroke on 7 November 1991. In spite of his own affectionate term, Tom's work must be considered more than just "dirty drawings", and given some of the credit for the change in the gay world's self-image. When Tom's work was first published, homosexuals thought they had to be imitation women, and spent their lives hiding in the shadows. Thirty-five years later, gays were much more likely to be hard-bodied sun-lovers in boots and leather, masculinity personified. Tom's influence in that direction was no accidental byproduct of his art. From the beginning, he consciously strove to instill in his work a positive, up-beat openness. When asked if he was not a little embarrassed that all his art showed men having sex, he disagreed emphatically: "I work very hard to make sure that the men I draw having sex are proud men having happy sex!"