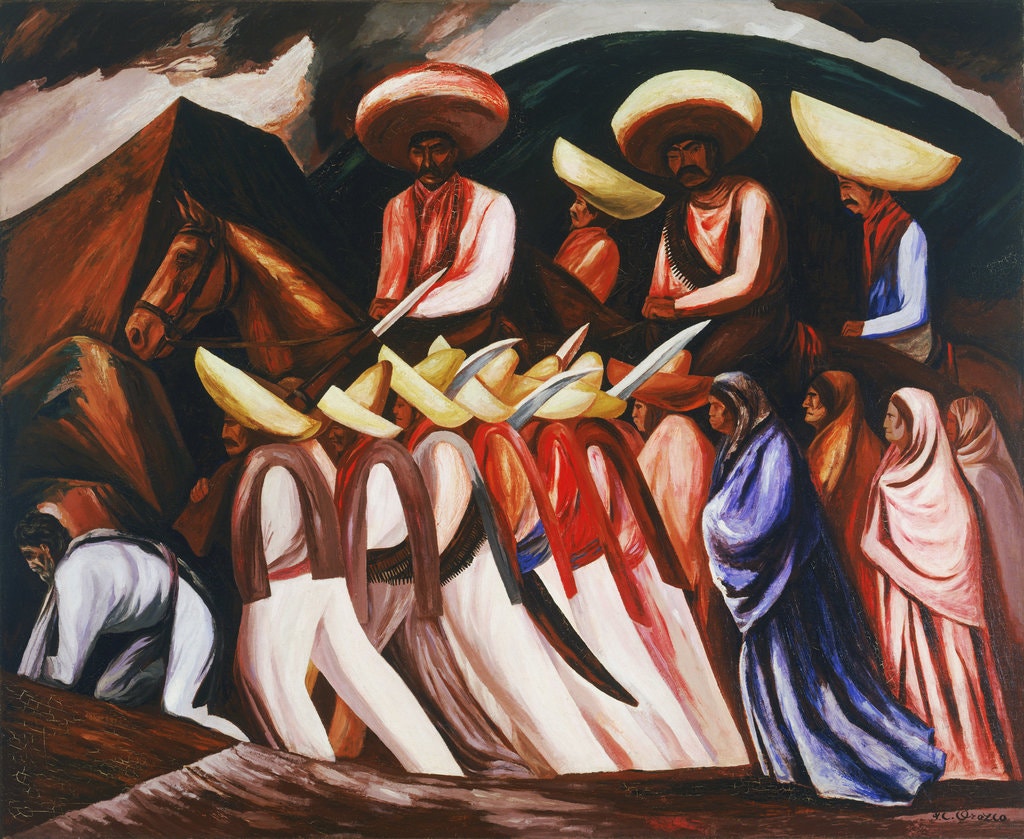 A stupendous show at the Whitney Museum explores the profound impact of Mexican painters — the meeting and mingling that enriched American culture. From floated proposal to finished product, “Vida Americana: Mexican Muralists Remake American Art, 1925-1945” at the Whitney Museum of American Art represents a decade of hard thought and labor, and the effort has paid off. The show is stupendous, and complicated, and lands right on time. Just by existing it accomplishes three vital things. It reshapes a stretch of art history to give credit where credit is due. It suggests that the Whitney is, at last, en route to fully embracing “American Art.” And it offers yet another argument for why the build-the-wall mania that has obsessed this country for the past three-plus years just has to go. Judging by the story told here, we should be actively inviting our southern neighbor northward to enrich our cultural soil. 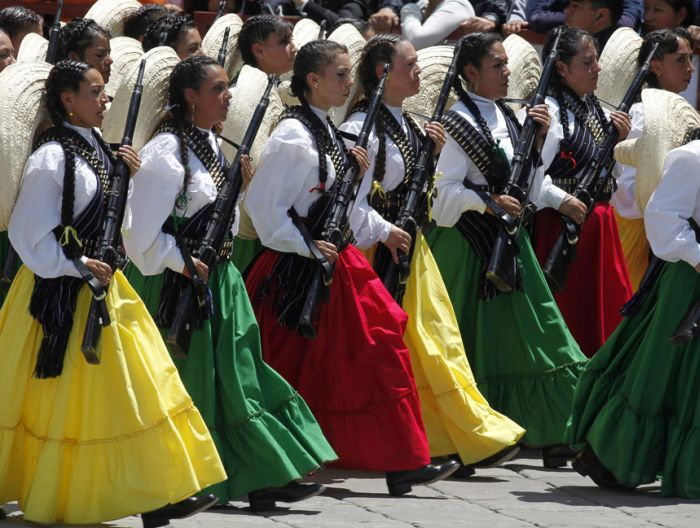 Soldaderas, Often Called Adelitas, Were Women in the Military who

Participated in the Conflict of the Mexican Revolution

That story, a hemispheric one, begins in Mexico in the 1920s. After 10 years of civil war and revolution, that country’s new constitutional government turned to art to invent and broadcast a unifying national self-image, one that emphasized both its deep roots in indigenous, pre-Hispanic culture and the heroisms of its recent revolutionary struggles. 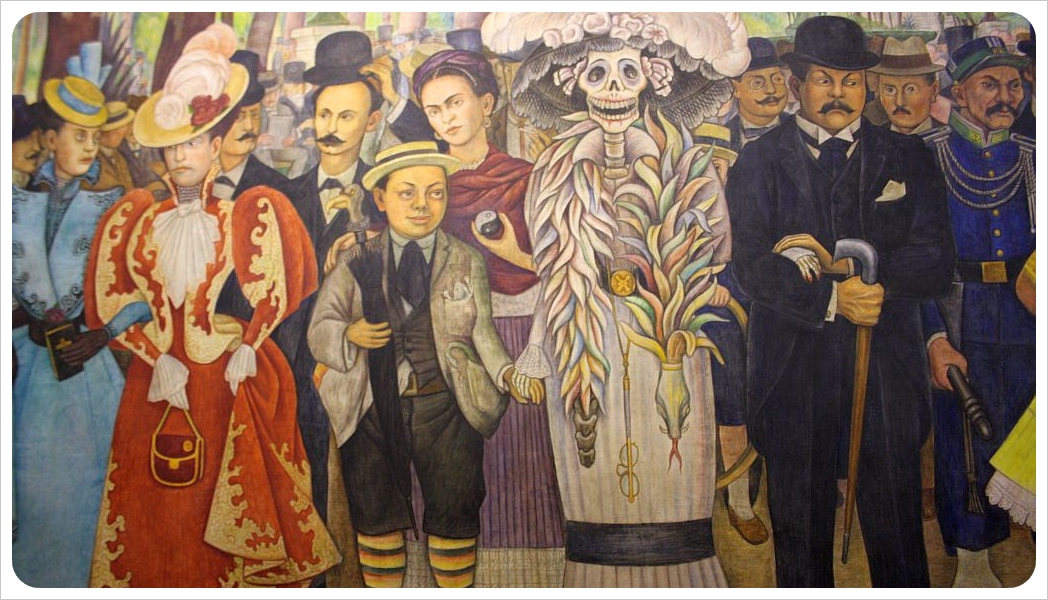 The chosen medium for the message was mural painting — monumental, accessible, anti-elitist, in the public domain. And three very differently gifted practitioners quickly came to dominate the field: Diego Rivera, José Clemente Orozco and David Alfaro Siqueiros: “Los Tres Grandes” — “the three great ones” — as they came to be known among admirers. Many of those admirers were artists in the United States. Some had heard word of a lush, affordable, artist-honoring tropical utopia, and traveled south to experience it for themselves. Others, alert to social inequities rampant under United States capitalism — to be laid bare by the Great Depression — wanted to make art a tool for social change and took the Mexican revolutionary experiment as a model. 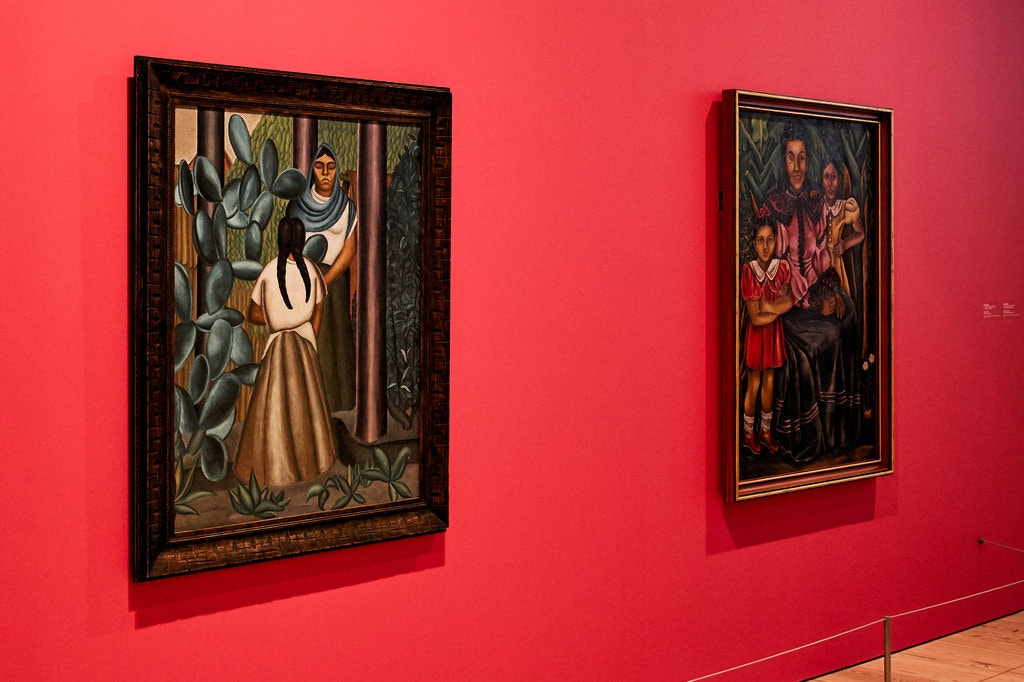 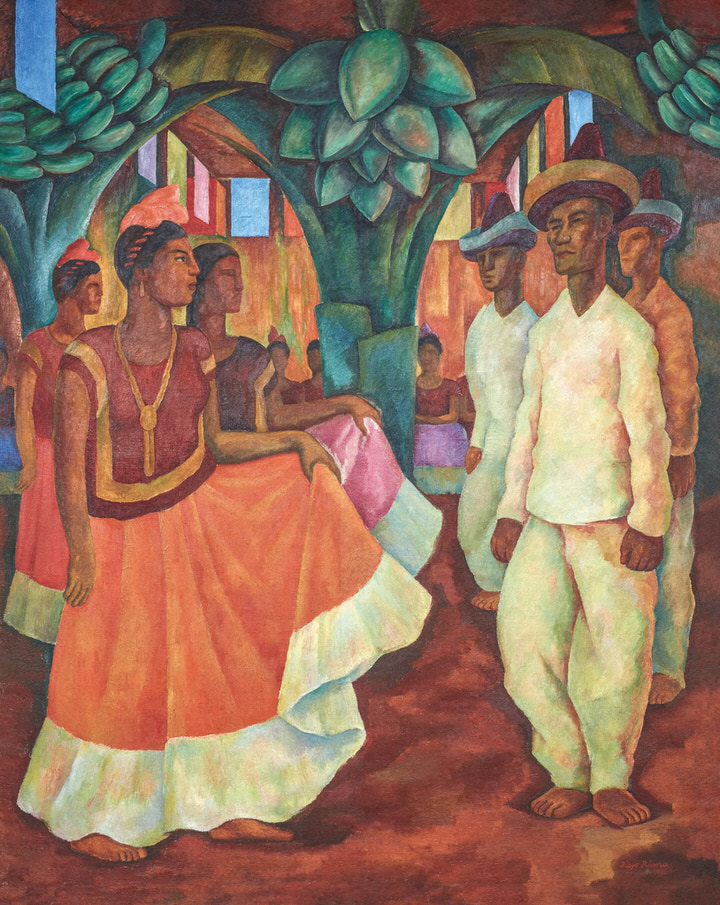 For all parties, the model was an exhilarating one, and the bright pink walls of the exhibition’s opening gallery suggest a fiesta atmosphere, as do the paintings gathered there: Alfredo Ramos Martínez’s 1929 image of an itinerant flower vendor bending under her load of calla lilies; a 1928 painting by Rivera of Yucatán dancers in orchidaceous gowns; and, from the same year, a scene, in Rivera’s volumetric, smooth-brushed, Paris-trained style, of women harvesting cactus by the American artist Everett Gee Jackson. 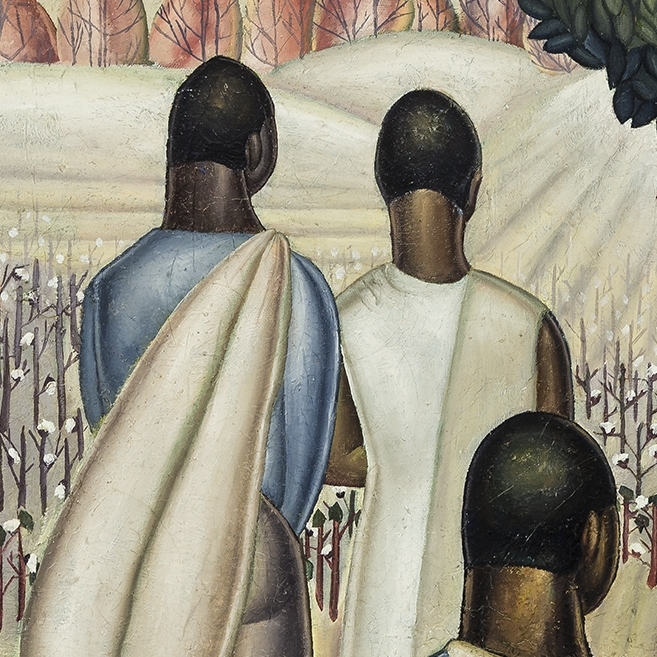 To Pick the Top Crop by Everett Gee Jackson 1932

Jackson (1900-1995), who was born in Texas and trained at the Art Institute of Chicago, made an art jaunt to Mexico in 1923 and stayed four years. He saw Rivera’s mural work in Mexico City and created his own variation on what had already become a local “national” style. There he also met Anita Brenner, a Mexican writer of Latvian Jewish descent, who was the fulcrum of a lively international community, and whose widely read 1929 book “Idols Behind Altars” — there’s a copy on display — introduced North Americans to the history of Mexican culture, from pre-Columbian times forward. 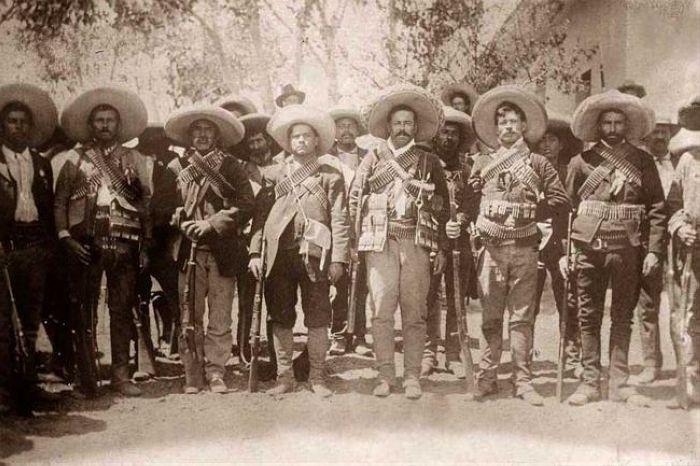 Turn a corner into the next gallery and you find work from around the same time but on overtly polemical themes. It was important for a nation that identified itself with populist struggle to keep the memory of that struggle burning, and art was on the job. You see this in a large charcoal painting study by Rivera of the firebrand revolutionary Emiliano Zapata trampling an enemy underfoot. And in an inky Siqueiros portrait of the same leader, looking as blank-eyed as a corpse. And in a spiky, depressed Orozco painting of the peasant guerrillas known as Zapatistas, their figures as stiff as the machetes they carry, locked in a grim forced march. 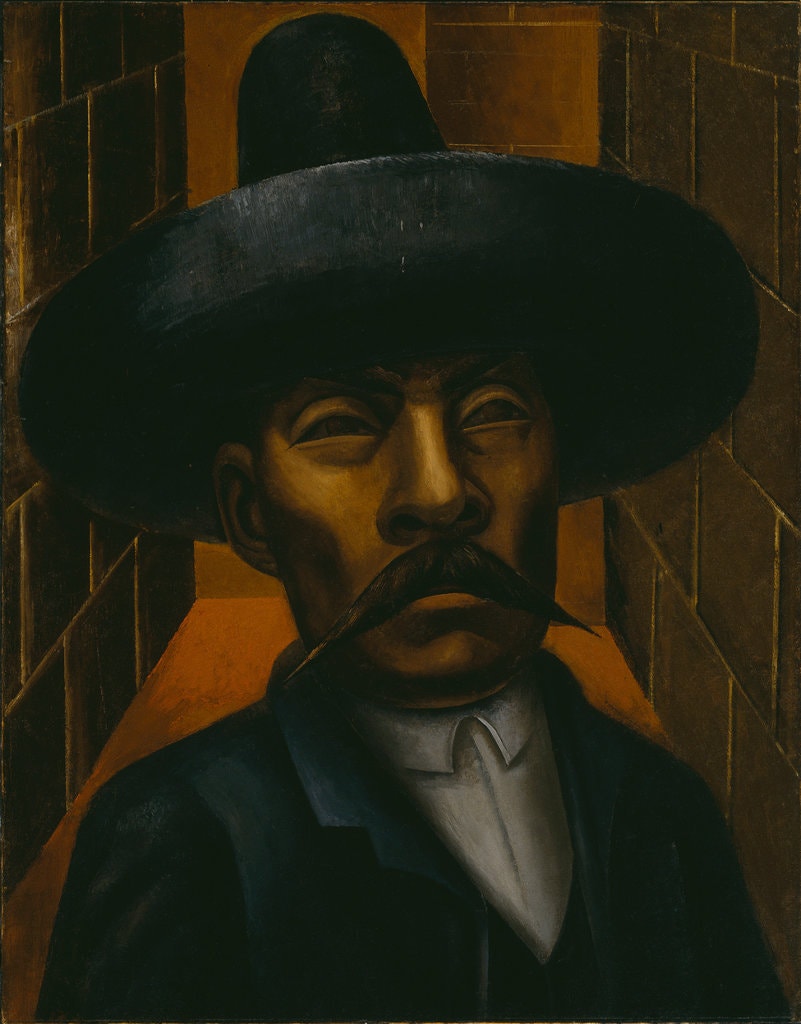 By the time these pictures were made in 1931, two of the artists were working primarily in the United States; the third would arrive the next year. There were reasons for this northern influx of émigré talent. With a change of leaders in Mexico, mural commissions had dropped off, and far-left politics — Rivera and Siqueiros self-identified as Communists — had become less welcome. Something like the opposite was true in the United States, where young artists radicalized by the Depression were eager to explore the possibilities of social consciousness-raising public art. To work with these masters was a dream come true. 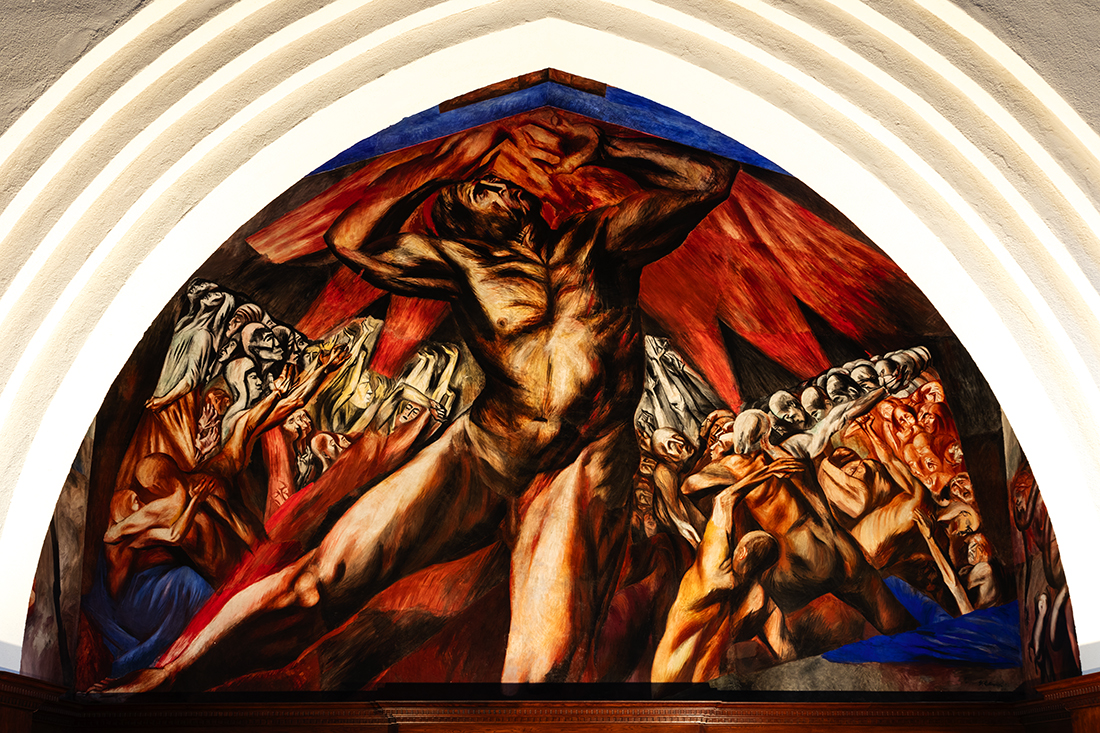 Orozco came first, to New York in 1927. There he taught easel painting and printmaking to a rapt cohort of local artists before moving on to California to execute a mural commission for Pomona College in Claremont — a 1930 fresco called “Prometheus” that the teenage Jackson Pollock, then living in Los Angeles, saw and never forgot. 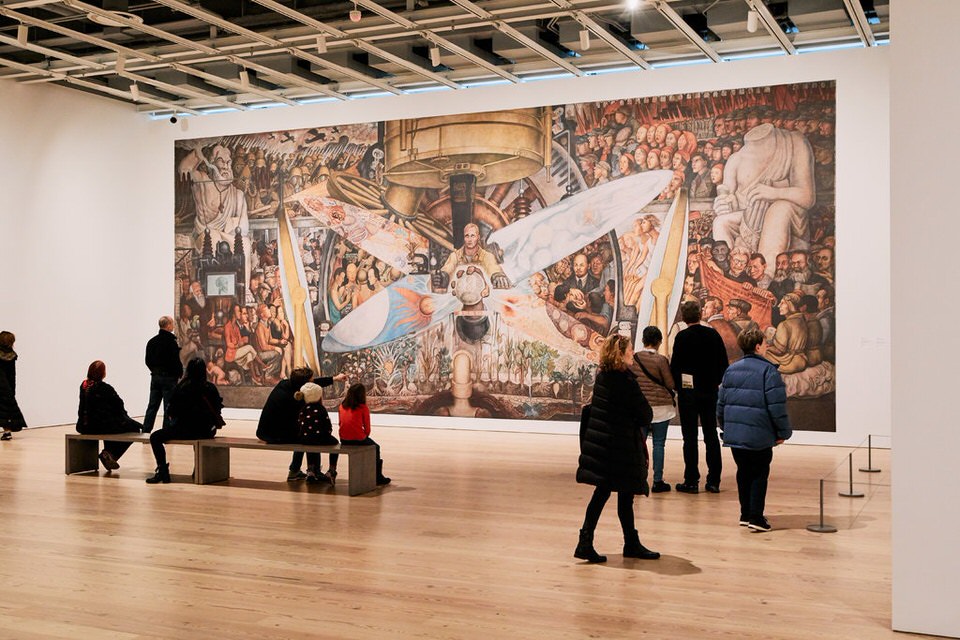 Obviously, the impossibility of having actual fresco projects in an exhibition that puts their existence at its center is a problem. But the show’s originating curator, Barbara Haskell — joined by Marcela Guerrero, Sarah Humphreville and Alana Hernandez — has finessed the matter by surrounding photographic reproductions of monumental works with real, related paintings and drawings. Some are studies done for the featured fresco, as in a tempera-on-canvas Orozco sketch of his Prometheus figure. Others are exceptional distillations of the artist’s spirit and style. Of the three marquee Mexican muralists, Orozco was the least politically hard-line, the most pessimistic by temperament, and the most poetic-minded. And it is two stand-alone images — one of a flaming, air-walking Blakean nude; the other, on loan from the Museo de Arte Carrillo Gil in Mexico City, of a furious Jesus hacking his cross to bits — that make the deepest impression here. 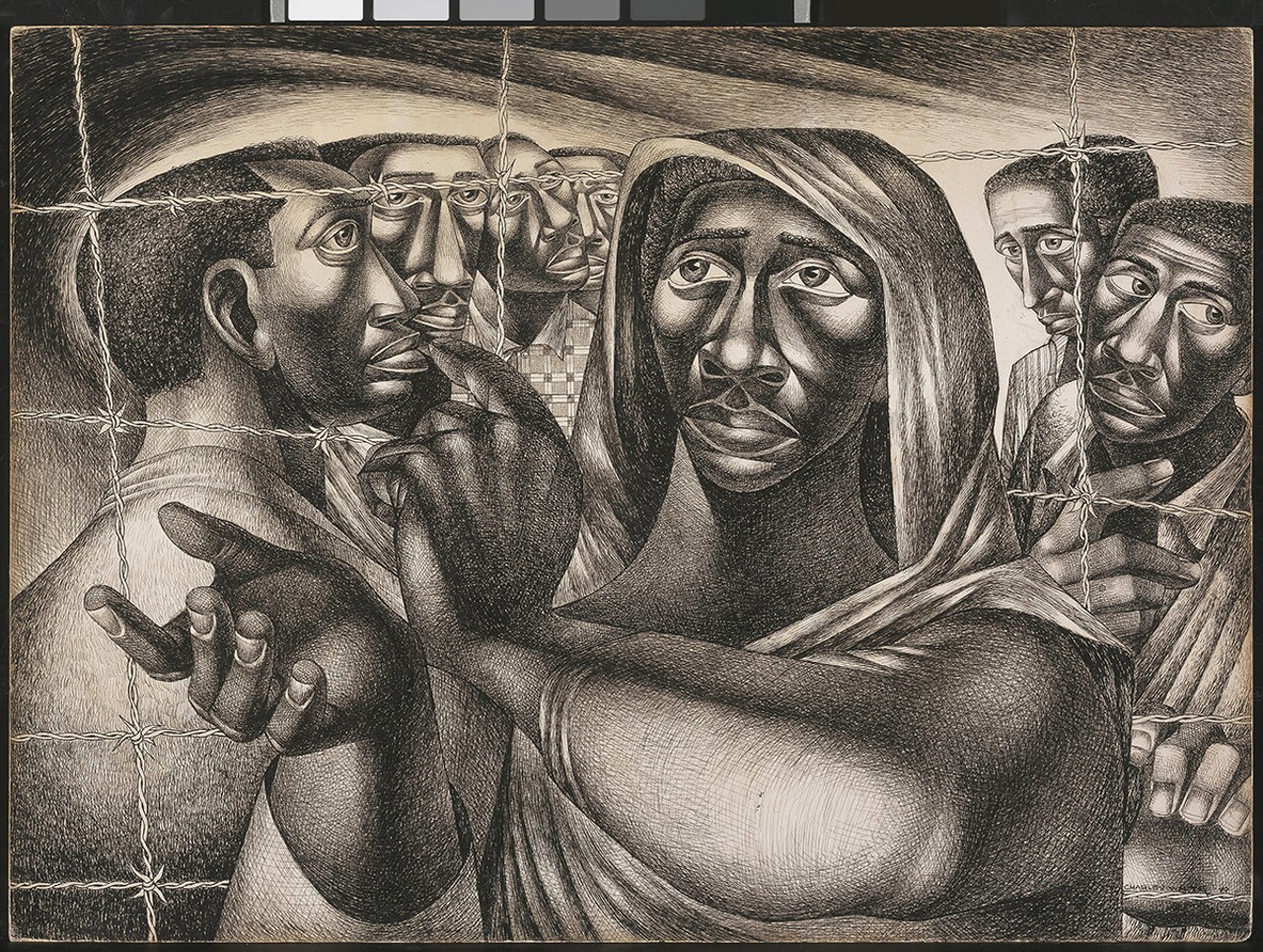 Most valuably, though, the curators have also included work by young American artists inspired by Orozco’s example. Pollock is one. Several livid, snarly, body-based paintings from the late 1930s show how thoroughly “Prometheus” had gotten under his skin. And the influence seems to have passed, by art world osmosis — many artists were networked through working on W.P.A. mural projects at the time — to artists like the Chicago-based Charles White, who applied a version of Orozco’s brand of muscular expressionism to his own epical paintings of African-American life. 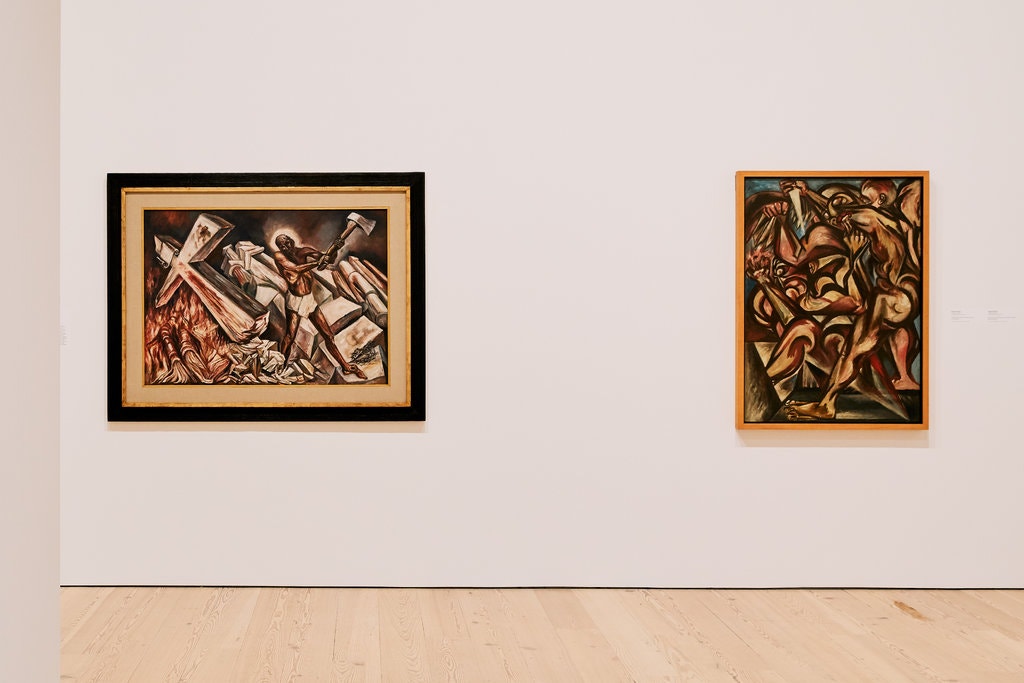 Two of the many side-by-side comparisons that show the mingling of Mexico and the United States: José Clemente Orozco’s “Christ Destroying His Cross,” 1943, left, and Jackson Pollock’s “Untitled (Naked Man With Knife),” circa 1938-40.  From this point on in the exhibition, although the Mexican muralists continue to be the anchor, American art crowds the spotlight. Rivera, as befits his celebrity, is awarded two separate spaces. But works by artists who learned from him — Ben Shahn, Philip Evergood, Thelma Johnson Streat, Xavier Gonzalez and Marion Greenwood — outnumber his own. You can see why he was a popular model. There’s something expressively boilerplate about his art, making it adaptable to varied uses and settings and patronage. This was one reason that, as the 1930s went on, more ideologically committed artists like Siqueiros began to brand him a sellout.

Siqueiros was the true on-the-ground activist of the three — he participated in a plot to assassinate Trotsky — and the one who took the most radical formal chances in his art. He is also given two galleries. The first is ostensibly devoted to his 1932 stay in Los Angeles and a mural he painted there, “Tropical America: Oprimida y Destrozada por los Imperialismos” — or “Tropical America: Oppressed and Destroyed by Imperialism.” But the people who commissioned it seem to have expected work on a different, upbeat theme and, offended by the scathing take on Yankee aggression, whited out the painting. (Chicano artists and activists lobbied for years to repair it, with the city and the Getty Conservation Institute teaming up to cover the cost, though as a gallery label notes, the brightness of its original colors proved to be unrecoverable. It appears in the show in a black-and-white photograph of its original state.) 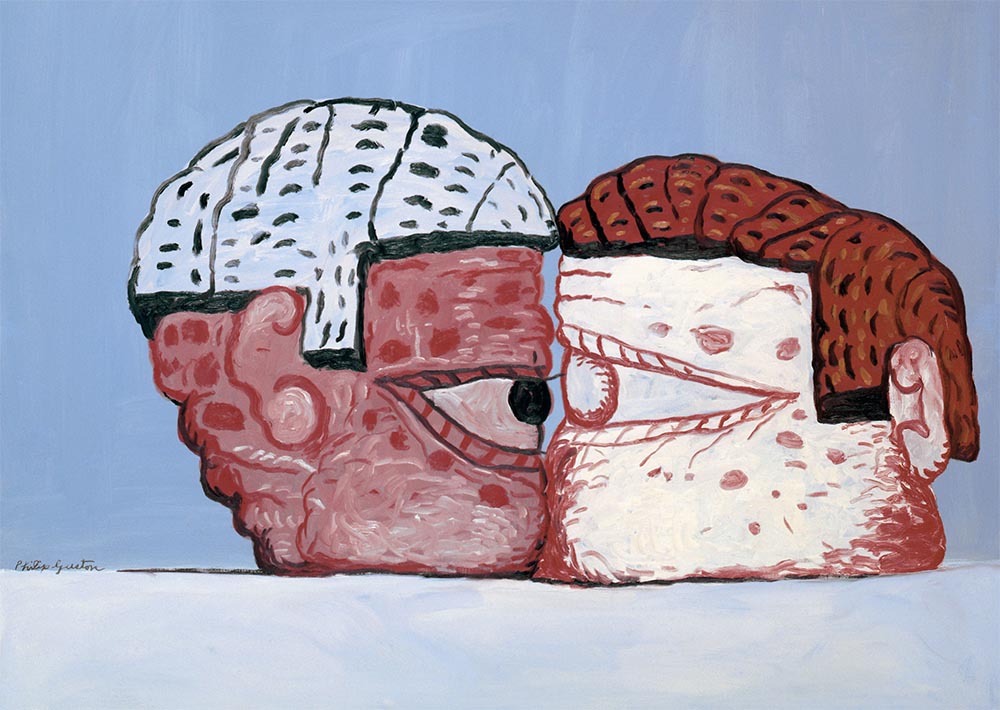 What this gallery is really about, though, is the stellar young artists who assisted and emulated him, among them Philip Guston (a high school friend of Pollock) and the Japanese-American painter Eitaro Ishigaki, whose racial identity and immigrant status marginalized him as surely as they did black and Latino artists at the time. (In 1951, he was arrested by the F.B.I. for having Communist affiliations and deported to Japan.) 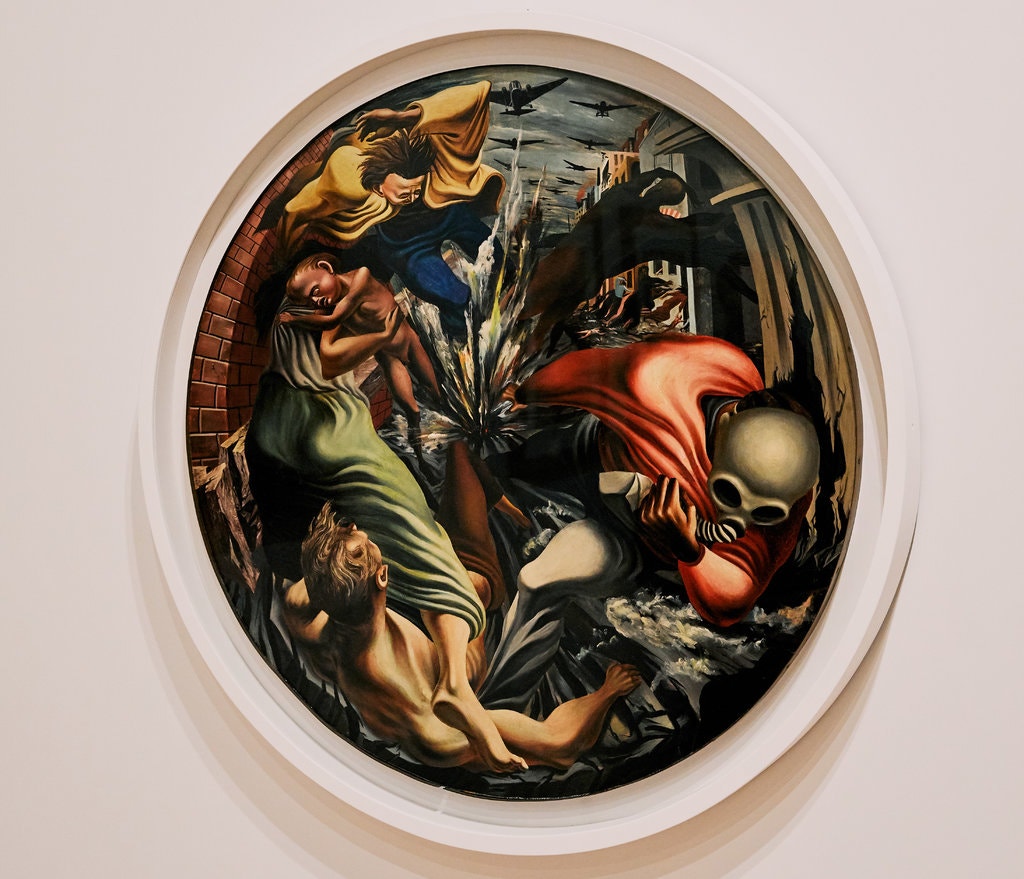 “Bombardment,” (1937-38) by Philip Guston, Among the Stellar Young Artists who Assisted and Emulated David Alfaro Siqueiros 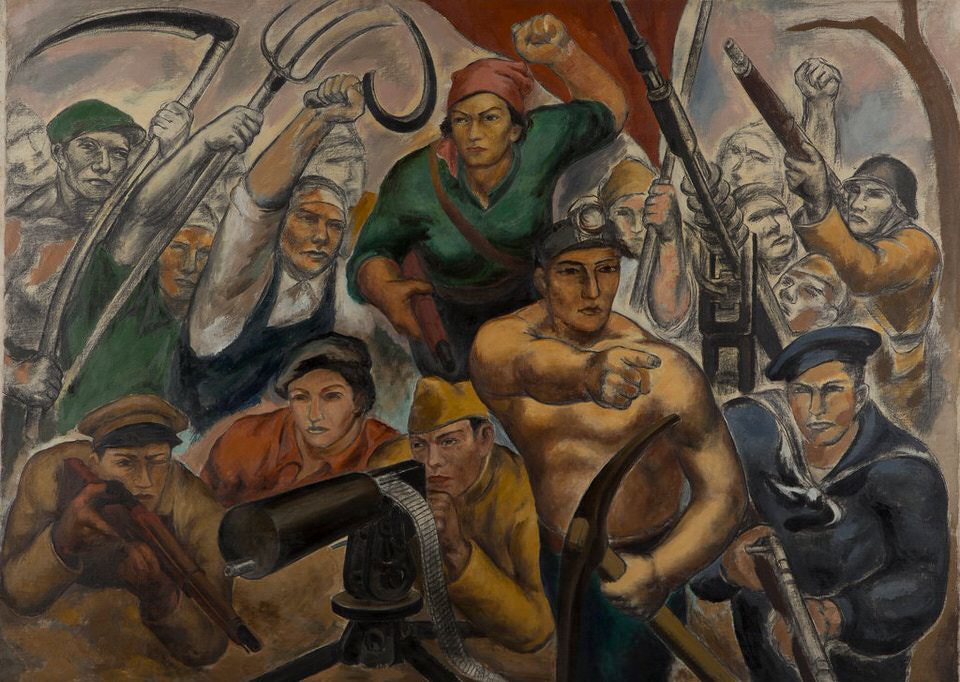 The exhibition’s final gallery, “Siqueiros and the Experimental Workshop,” is basically a Siqueiros-Pollock showcase. It’s set in New York, where, beginning in 1936, the two artists worked together as teacher and student. We see examples of the increasingly anti-conventional techniques the muralist developed: spraying, splattered, dripping paint, building up glazes in ugly lumps on the canvas surface, anything to make the results look unpolished and unsettling. And we see Pollock beginning to test out these unorthodoxies. He would, eventually, transcendently, apply them to abstraction. But it’s clear that even in the 1930s he was on fire. And the evidence is that Siqueiros held the igniting match. 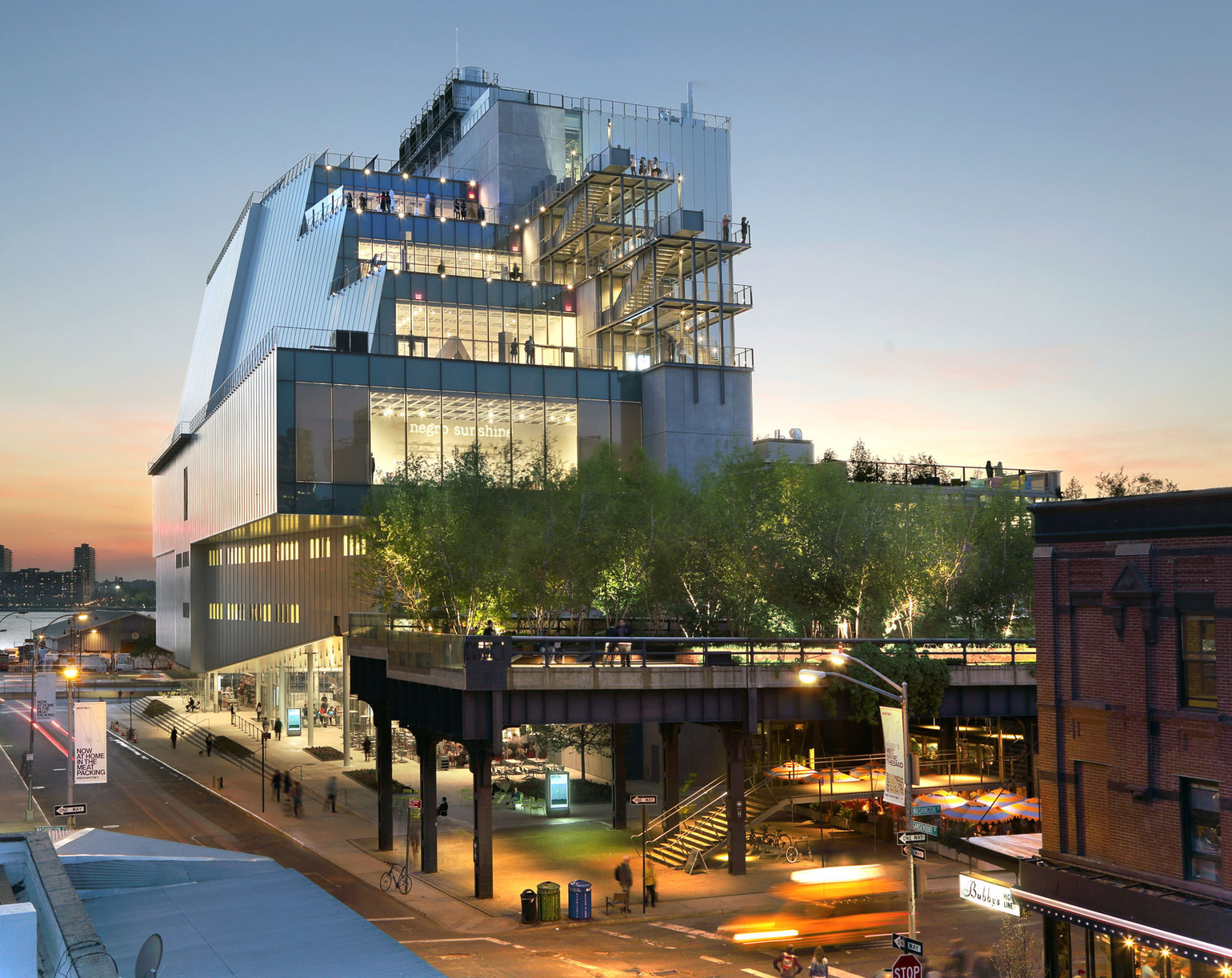 Is it too much to say that we owe Abstract Expressionism, at least the Pollock version of it, to Mexico? Maybe, but only a little too much. In any case, the debt was forgotten fast. Pollock stayed mum on the subject of sources. Once World War II started, the United States didn’t want to know from anticapitalist leftists, or immigrants, particularly brown-skinned ones. After the war, Communist was a prosecutorial scare-word, and Abstract Expressionism was suddenly red-white-and-blue. It was advertised internationally as a visual embodiment of American freedom, with no mention, maybe no memory, of where its greatest practitioner learned his Ab-Ex moves. This exhibition demonstrates this by putting Siqueiros and Pollock together and uses the same compare and contrast method throughout, often pairing canonical stars with artists we may not know, like Luis Arenal, Jesús Escobedo, Mardonio Magaña, Edward Millman, Alfredo Ramos Martinez, Mitchell Siporin, Henrietta Shore, and Thelma Johnson Streat. Did influence run both ways? Student to teacher? South to north and back? Undoubtedly. (And everyone learned from Europe.) The result at the Whitney is a study in multidirectional flow, tides meeting, mingling, which is the basic dynamic of art history, as it is, or should be, of American life. It’s a dynamic of generosity. It gives the show warmth and grandeur. Why on earth would we want to stop the flow now?