The Art of Édouard Manet - A Radical Embrace of Beauty, Fashion and Happiness

The Art Institute of Chicago explores the great paradox of the 19th century’s greatest painter: from a scandalous youth of frank nudes to flowers, fruit bowls and fashionable women. In 1865, two years after they rejected his “Déjeuner sur l’herbe,” the gatekeepers of the Paris Salon accepted two paintings by Édouard Manet into Europe’s most prestigious exhibition. One was a slablike, Spanish-influenced religious scene of Christ mocked by Roman legionaries. But it was the other that eclipsed more than 3,500 other works in the Salon, and set off a scandal that makes the recent brouhaha at the Whitney Biennial look as stately as a Noh drama. 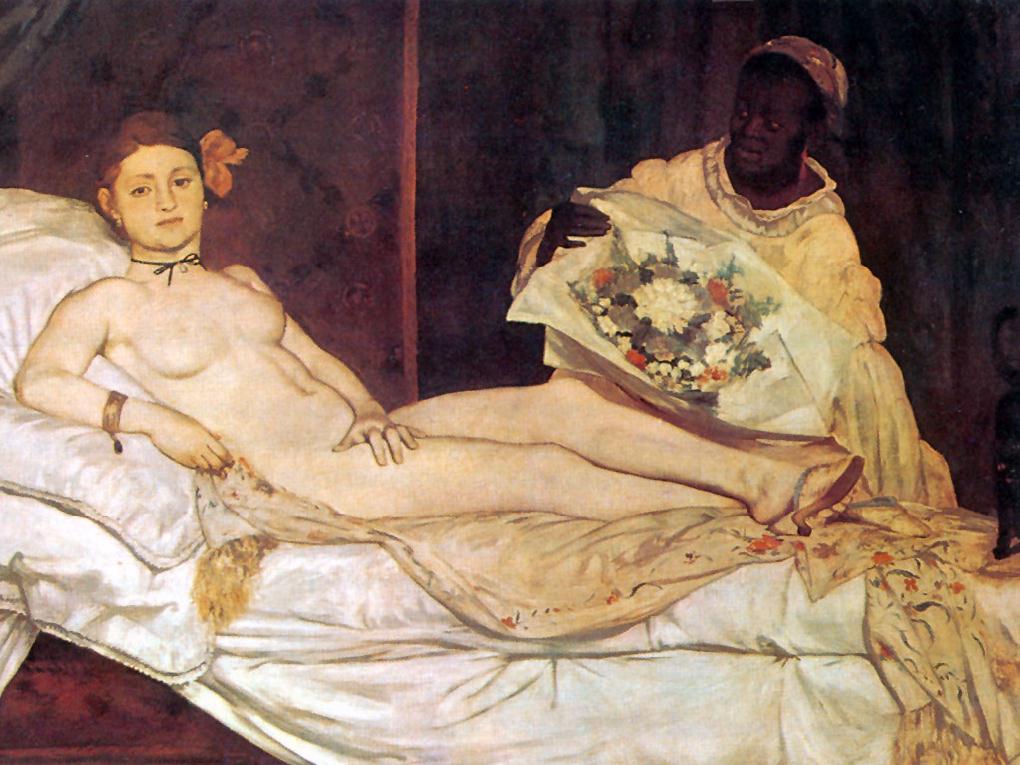 “Olympia,” is a radically flat depiction of a common prostitute, her servant and her cat with pitiless candor. Art students threw punches. Security guards had to be called in. The newspapers published brutal caricatures of Manet and his models, and art critics savaged it as “vile,” “ugly,” “stupid,” “shameless,” a work that “cries out for examination by the inspectors of public health.”  Manet’s “Olympia” set off a nearly riotous scandal when it was first displayed at the 1865 Salon. It resides in the Musée d’Orsay in Paris.

This exhibition is the first to focus on this important period in the artist’s career, bringing together an impressive array of portraits of fashionable women—favorite actresses and models, bourgeois women of his acquaintance, and his wife—as well as intimate male friends. Among these are two striking paintings, one of the young model-actress Jeanne Demarsy and the other of his friend Méry Laurent. Called Jeanne (Spring) and Autumn (Méry Laurent), the pair comprises the only two completed works in a project to portray the seasons through paintings of stylishly attired women. 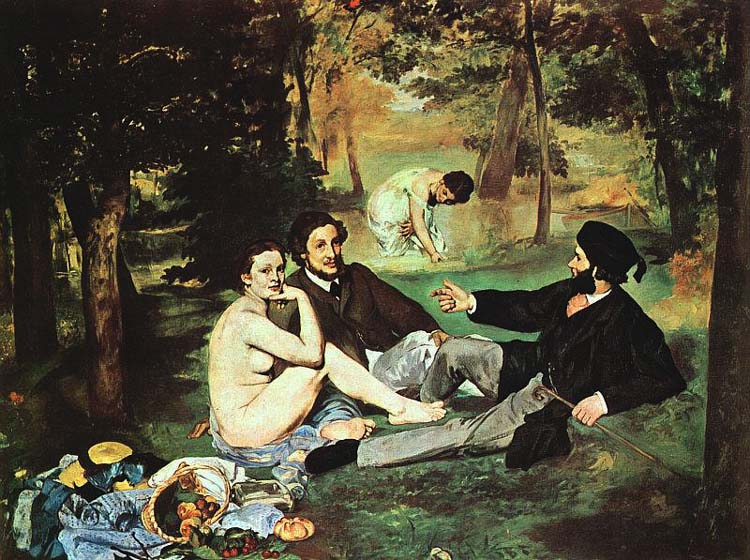 A more bohemian artist might have relished the hatred. Not Manet. He was a bourgeois Parisian, hungry for public approval and civic honors, even as he painted works of such frankness that they kept him outside the establishment. He had struck the first blows for modern art, but it came at a punishing social cost. And as he got older, he leaned away from the plainness of his scandalous youth to paint flowers, fruit bowls, and fashionable women, all in a lighter, pleasanter key that found favor even in the hidebound Salon. 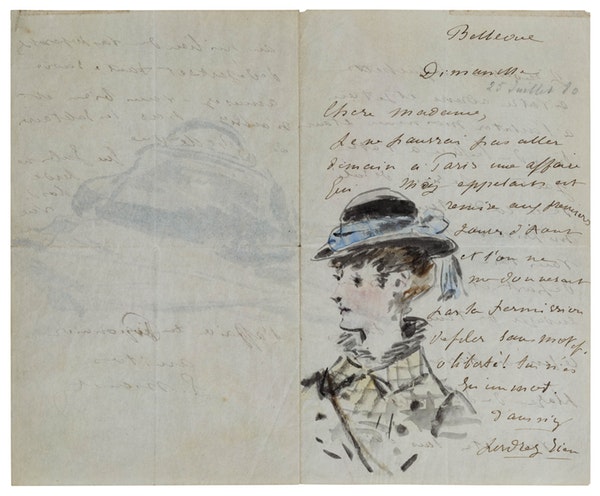 This is the great paradox of the 19th century’s greatest painter, and it’s the crux, too, of the exhibition “Manet and Modern Beauty,” on view at the Art Institute of Chicago, which focuses on the art of Manet’s last six or seven years before his early death in 1883, at the age of 51. Fresh, charming, a bit evasive and almost too stylish, “Manet and Modern Beauty” sticks up for these later portraits, genre scenes and still lifes — which the last century’s art historians, enraptured by “Olympia” and her ilk, tended to dismiss with the three Fs: frivolous, fashionable and (worst of all) feminine. 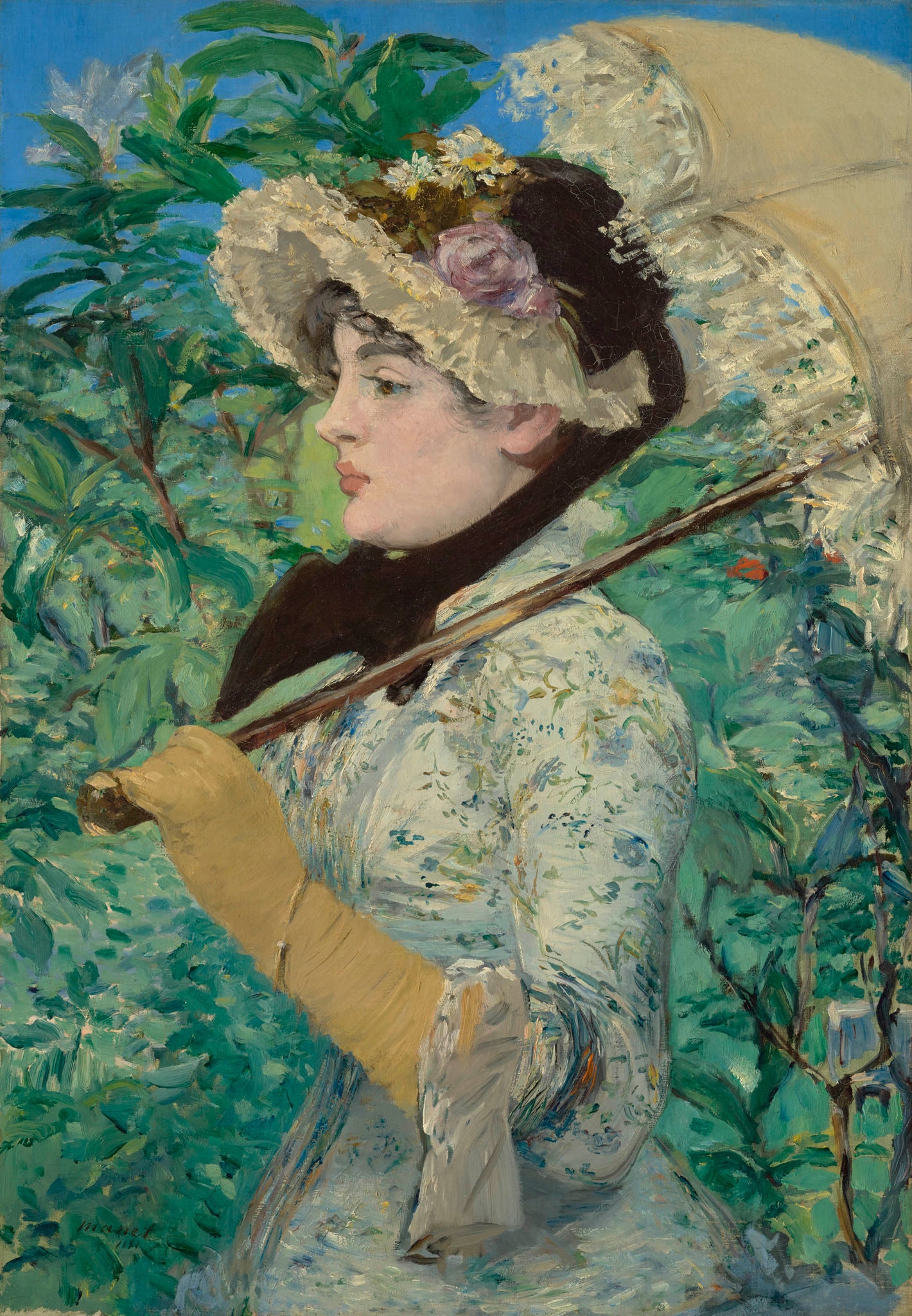 “Manet and Modern Beauty” has a further mission: to pump up the reputation of one of Manet’s last paintings, “Jeanne (Spring),” which the J. Paul Getty Museum in Los Angeles acquired in 2014 after more than a century in the shadows. 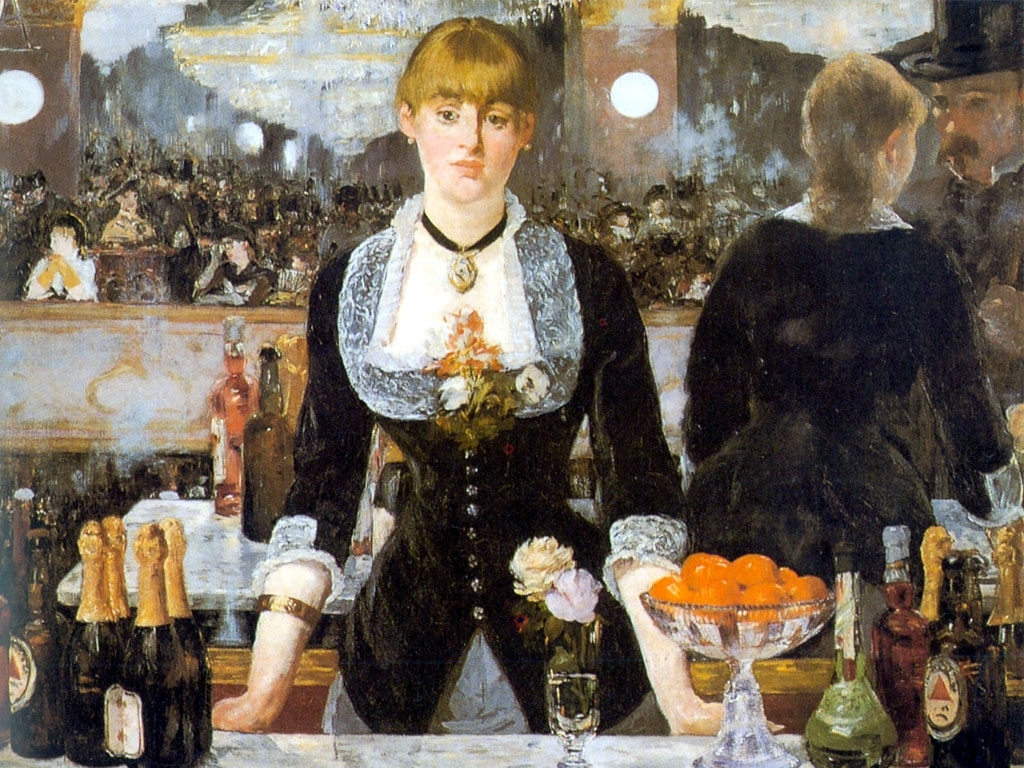 A Bar at the Folies Bergere - Édouard Manet 1882

Painted in 1881 — and first exhibited in the 1882 Salon with the much more famous “A Bar at the Folies-Bergère”  — “Jeanne” depicts  a fashionable Parisienne lost in thought as she walks through a garden.  “Jeanne (Spring),” from 1881, is the centerpiece of the exhibition. The J. Paul Getty Museum in Los Angeles acquired it in 2014 after more than a century in the shadows. 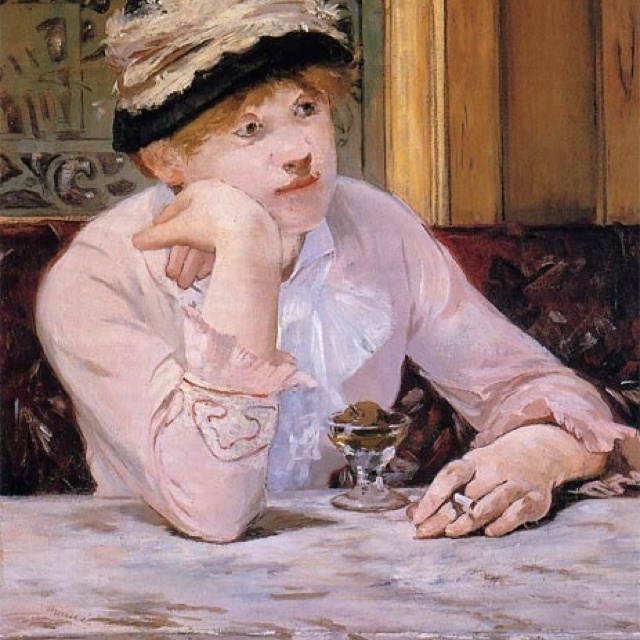 Manet’s embrace of beauty in the late 1870s went together with a keen gaze on the social milieu of the new Third Republic, finally recovering from its defeat in the Franco-Prussian War and throwing off an old moral order. Brilliant scenes of Paris cafe culture — including “Plum Brandy” (1877), depicting a glum woman musing over a drink and a cigarette at a marble table, and “The Café-Concert” (circa 1878-79), in which a top-hatted gent and a working-class woman nurse beers together — display an engagement with public leisure and sexual mores that would culminate in the optical and social riddle of the “Bar.” 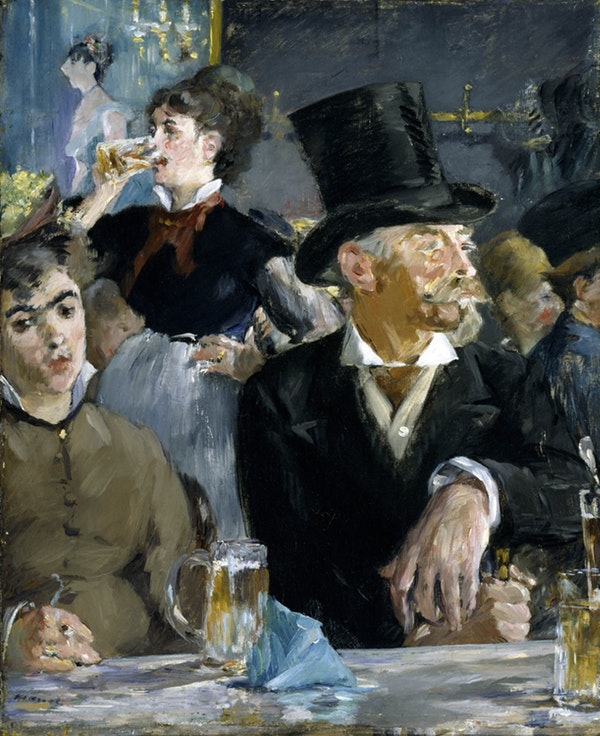 “The Café-Concert,” circa 1879. Jason Farago writes that Manet treated the cafes and parks of Paris as “venues where new life was made from scratch. 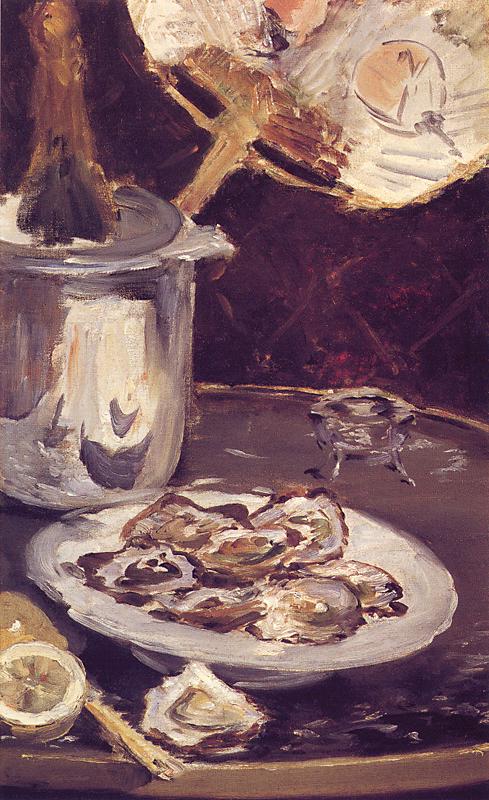 Many late still lifes, too, make a virtue of pleasure and urbanity. One astounding painting here, from a private collection and not exhibited in nearly 20 years, depicts a half-dozen oysters and a chilled Champagne bottle with arresting briskness, and includes a Japanese fan that would have been the height of fashion. “One must be absolutely modern,” Rimbaud commanded a few years previously, and Manet held fast to that principle — treating the cafes and parks of Paris as not just sites of enjoyment but also venues where new life was made from scratch. 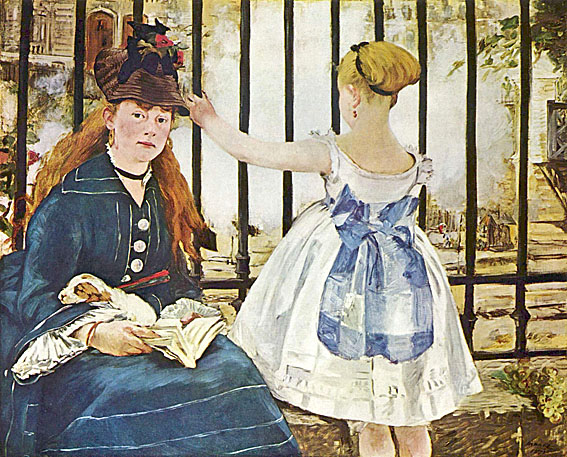 Manet had always been an adept of women’s fashion, and “Manet and Modern Beauty” looks carefully at how clothing and accessories work to signal modernity in the artist’s late work. 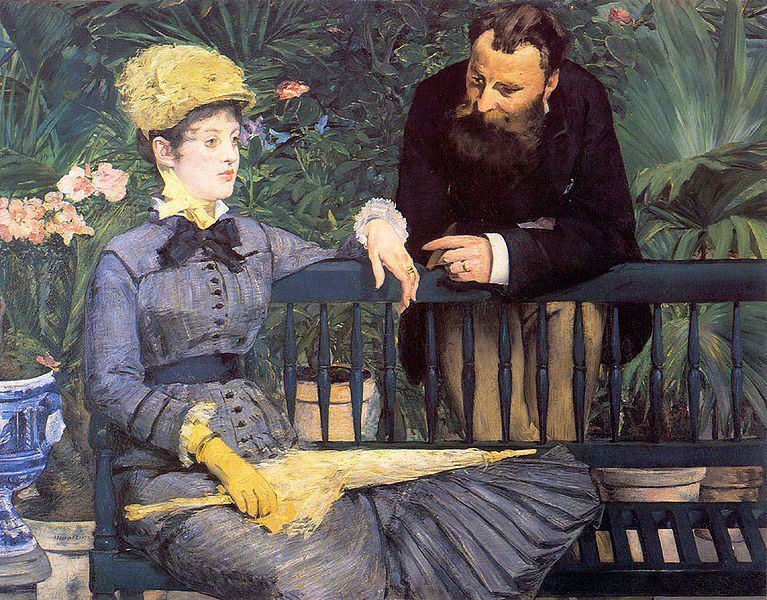 In the large, tight, equivocal “In the Conservatory” (circa 1877-79), a woman on a bench stares impassively into the middle distance, while a man leans down in silent vexation. Their left hands, each sporting a wedding band, dangle near each other but do not touch. What compounds the painting’s ambiguous force — is this a flirtation? a break-up? a reconciliation? — is the woman’s up-to-the-minute outfit: a form-fitting gray dress with an accordion-pleated train, set off with a silk belt and bow and enlivened with a hat, glove and parasol in jasmine yellow. The picture is as open as “Olympia” is blunt, and Manet captures it all with indefinite, flowing brush strokes that give it a startling freshness.  "Il Giardino d Inverno" is one of the last major works by Édouard Manet which depicts a fashionable couple who live their private lives in public. 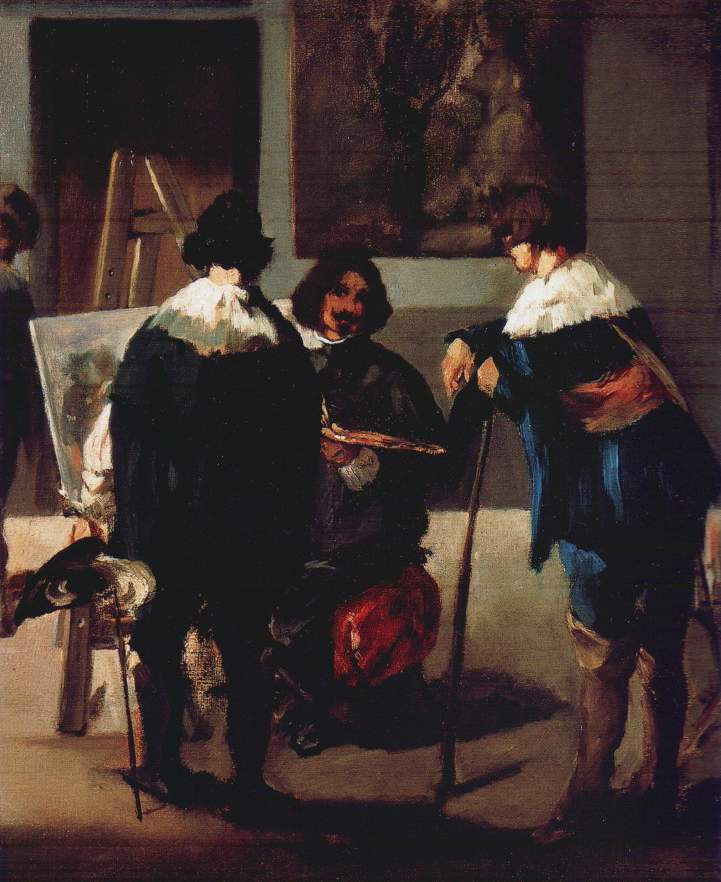 Unlike the plein-air Impressionists who worshiped him, Manet was a studio artist to the end, and as his health began to fail in 1879 he took to smaller formats, sometimes aimed at the market and often shared with friends. He wrote letters that included exquisite sketches of plums, chestnuts, even a shrimp. 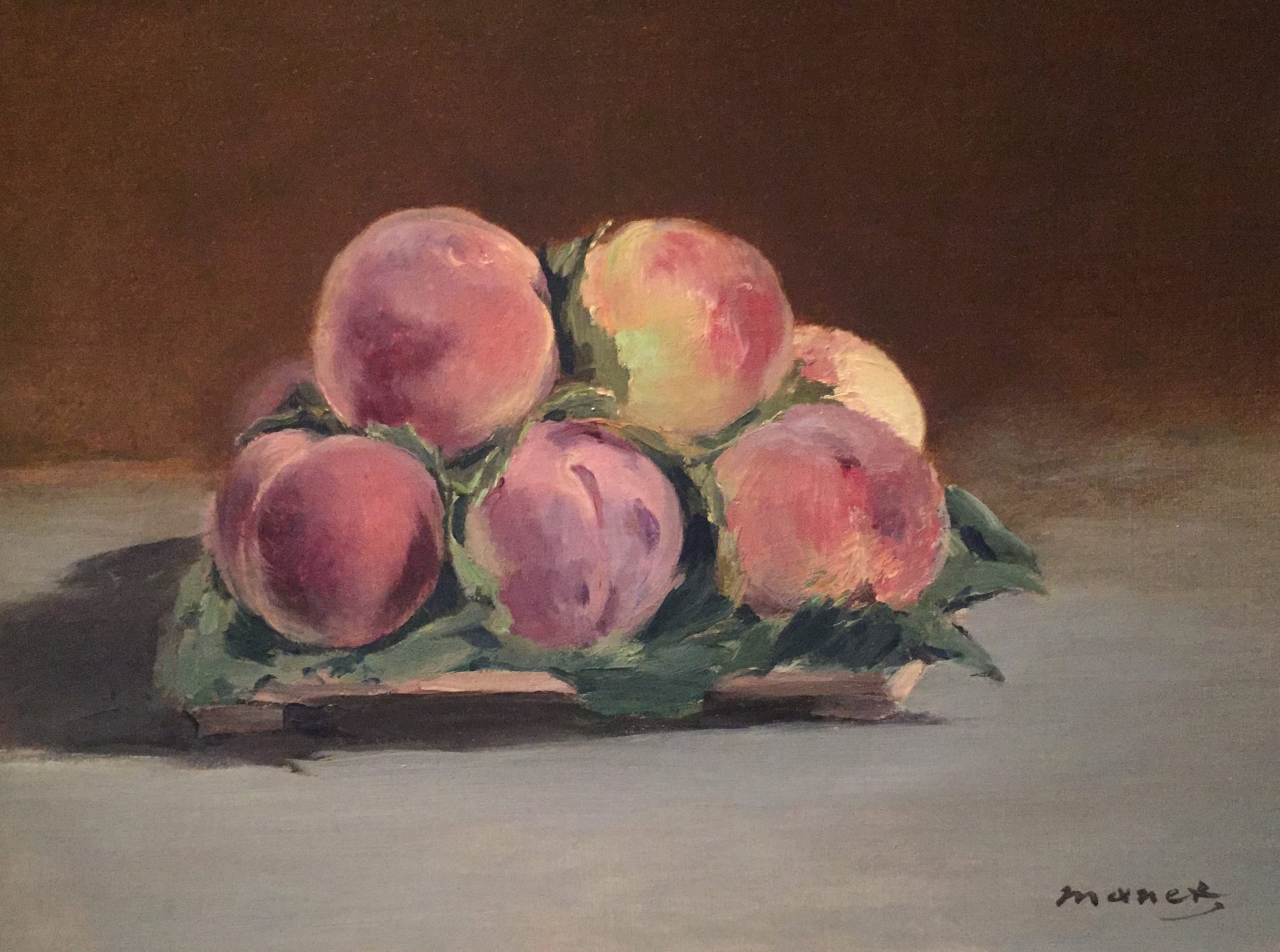 Pastels become a favored medium after 1880, especially for pictures of women. Small, luscious still lifes of fruit and flowers, made when Manet was in chronic pain, display a judiciousness that makes them even more delectable. 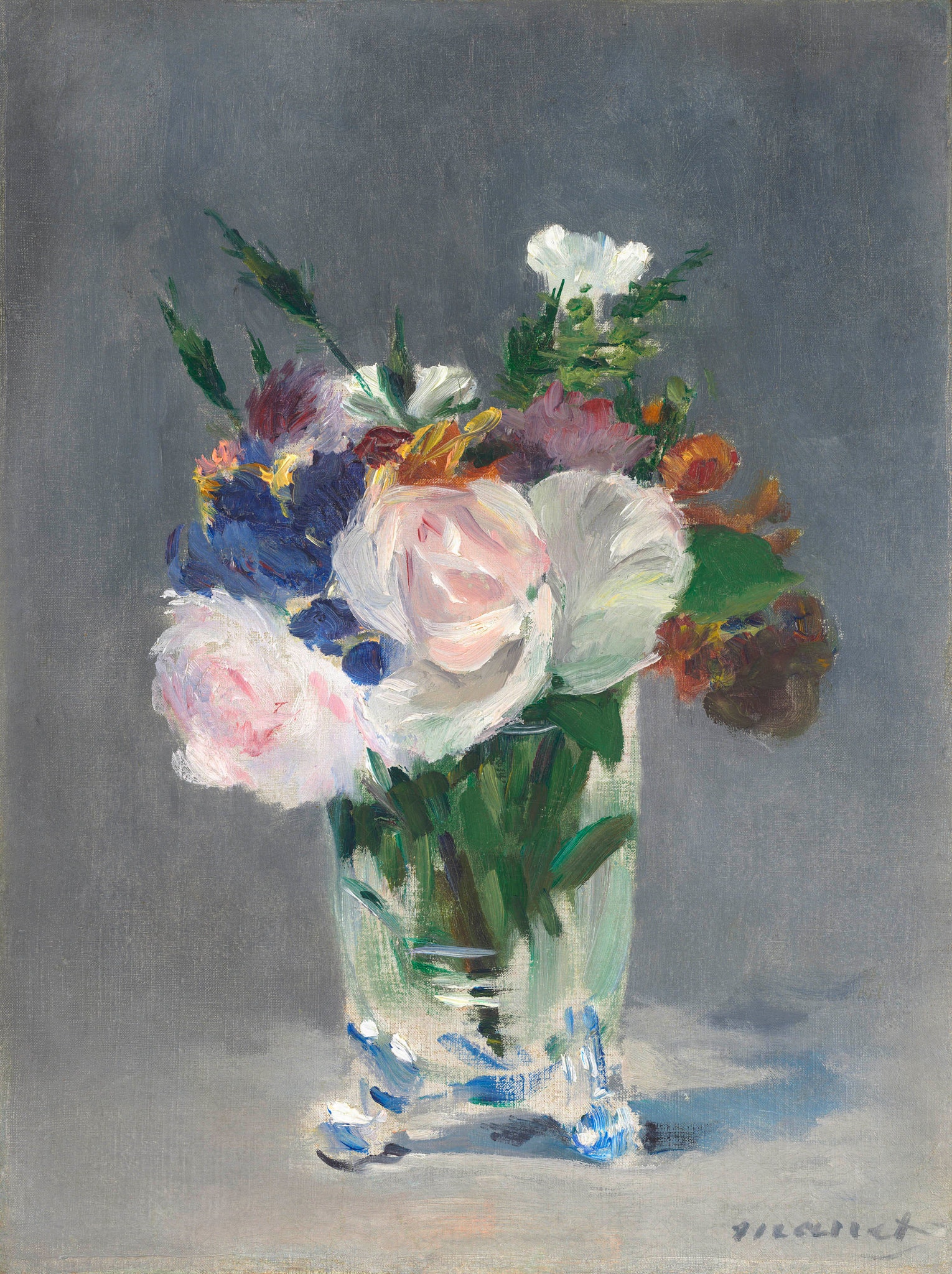 “Flowers in a Crystal Vase,” circa 1882 - National Gallery of Art, Washington, DC.

“Manet and Modern Beauty” owes a lot to feminist scholarship on the artist over the last 30 years, and even the curators’ choice of walls of muted rose and dusky lilac signals their embrace of the “feminine” epithet that opponents of the late work once hurled. But there have always been many Manets, and even the later, tenderer Manet coexists with an artist of deep political engagement and historical sweep. 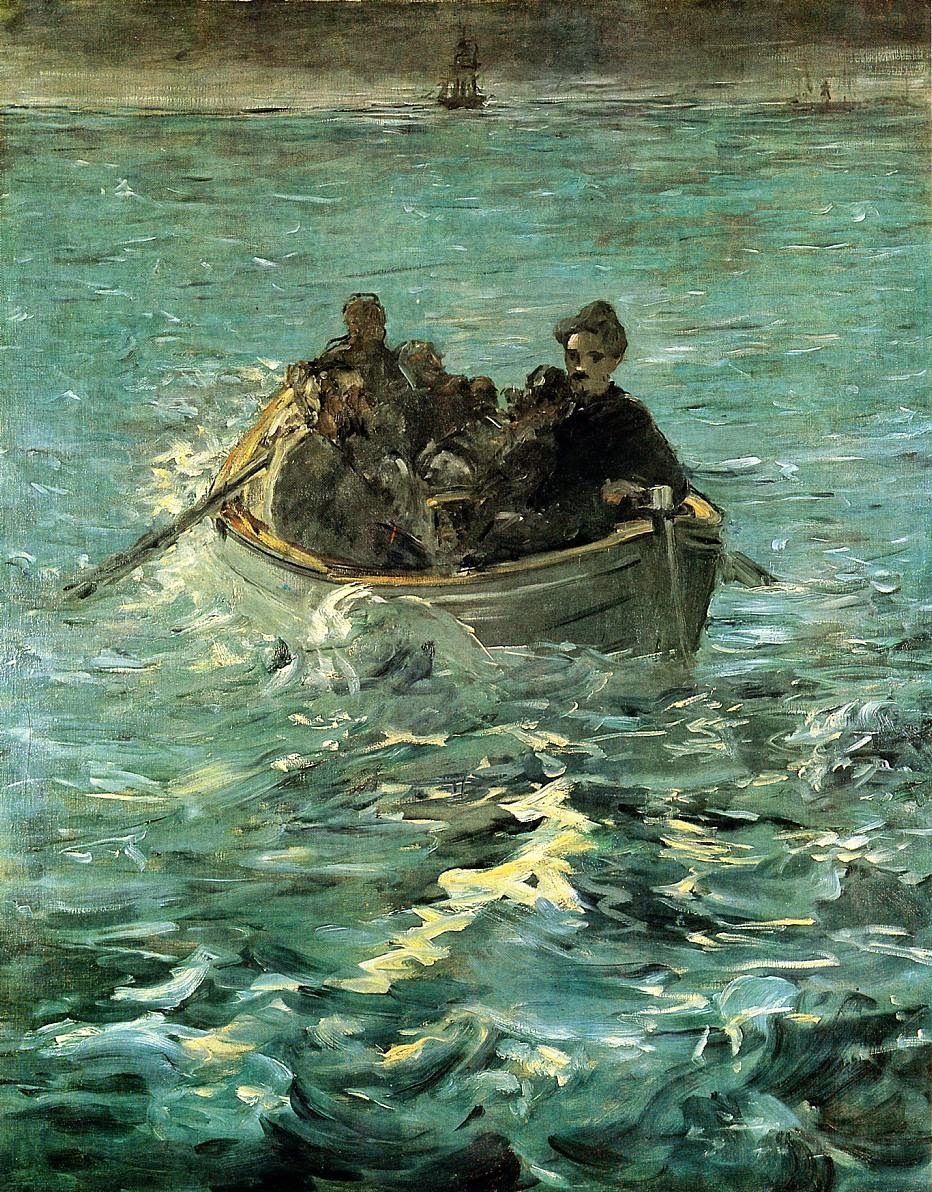 The glaring absences in this exhibition — even more than the “Bar” — are Manet’s 1881 portrait of the exiled Communard Henri Rochefort, as well as his two late great seascapes, both titled “Rochefort’s Escape” and painted in 1880-81. As Mr. Allan writes in the catalog, Manet’s last years coincided with “an epochal political shift leftward” in France, and these maritime paintings with a political prisoner form the last act in Manet’s long interweaving of historical painterly styles and current events.