Scott Dittman — better known to his friends as Howie — says he doesn't wake up in the morning thinking of himself as an LGBT ally. But, last weekend, he still made a big impact. Dittman, 44, heard his friend Denna was heading to Pittsburgh Pride with Free Mom Hugs, an organization that assists LGBT people and also provides hugs at Pride events. "And I just said, 'well I’m going to go,' and I hopped on Amazon and grabbed a 'free dad hugs' T-shirt," he told BuzzFeed News. "I just thought it would put a smile on people’s faces." What he didn't expect was just how big an effect it had, not only on Pride attendees, but on himself. 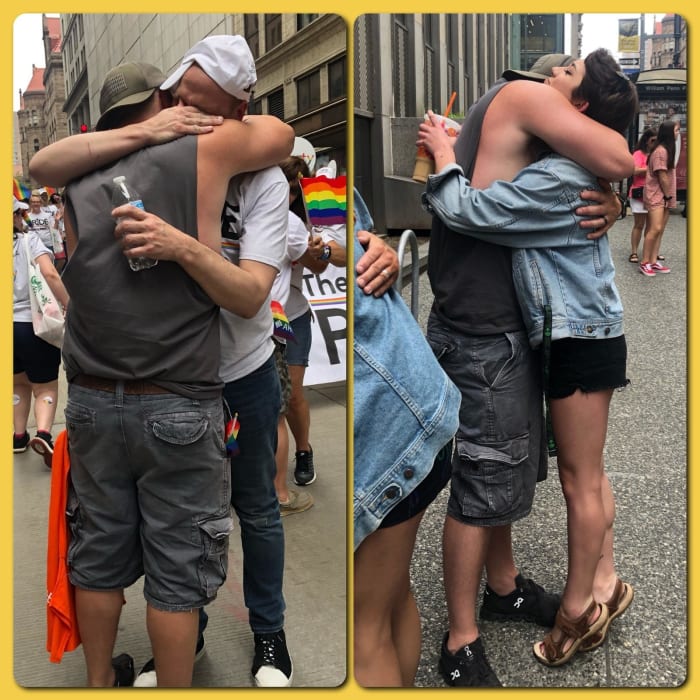 "I turned around and she’s just standing there in front of me with tears in her eyes," said Dittman.

The second big moment was the man on the left. He told Dittman he was abandoned by his parents when he came out at 19.

"He just sobbed and sobbed and thanked us," said Dittman. "He just melted.

It was an honor to be involved in that, but it was terrible at the same time." 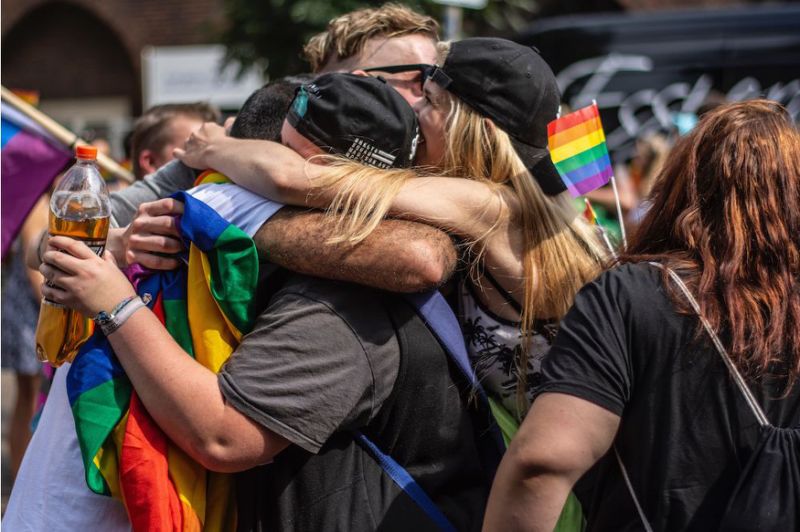 He said there were all kinds of hugs that day — happy ones, ones with tears, ones full of joy. He could just tell that when people saw him, a switch would flip. 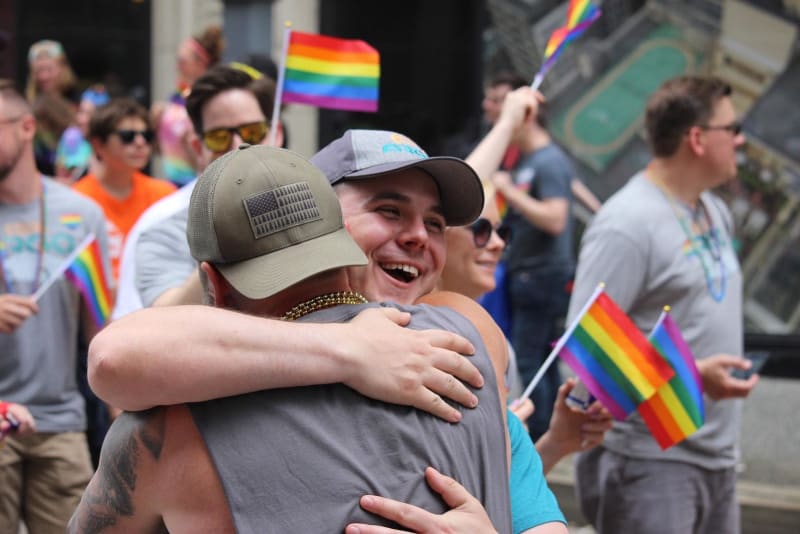 "You could tell they hadn’t had something as simple as a hug from their dad in a long time," he said.

"That broke my heart."

When Howie got back home, he felt angry that so many of the people he hugged were carrying around so much hurt. That's when he decided to post about the experience on Facebook. "Imagine that, parents. Imagine that your child feels SO LOST FROM YOU that they sink into the arms of a complete stranger and sob endlessly just because that stranger is wearing a shirt offering hugs from a dad," he wrote.

"Think of the depths of their pain. Try to imagine how deep those cuts must be."

But it didn't stop there. Dittman said he's received over 1,500 messages from strangers. Some are people whose parents don't accept them, and some are those parents themselves. "I’ve had so many parents reach out to me saying they’ve been crying for days, saying they’ve been those parents, and they’ve reached out to their children they haven’t talked to in years," said Dittman. "How do even describe that?" he said. "How do you even describe the feeling that gives you?" 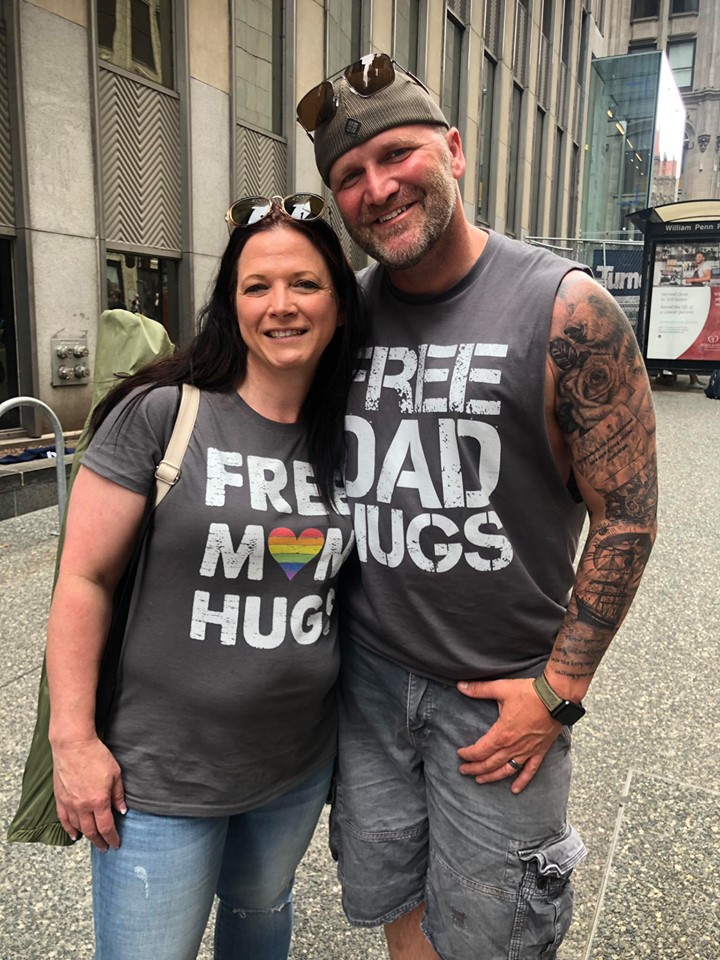 "A handful of us went to the Pittsburgh Pride Parade today, sporting our FREE DAD HUGS and FREE MOM HUGS t-shirts. We gave out hundreds of hugs. Hundreds. Some were super happy hugs. But others were like these two... and there were way too many like them.
Let me tell you about these two.

He was kicked out at 19 when his parents found out. They haven't spoken to him since. He cried on my shoulder. Sobbed. Squeezed me with everything he had. I felt a tiny bit of that pain that he carries with him every minute of every day. He was abandoned because of who he loves. And on June 9th, 2019, he was participating in a celebration of love when he was brought to his emotional knees by a shirt that said "FREE DAD HUGS" on a complete stranger.

Her story? I don't know the specifics. But I know that she saw me from across the street. I wasn't paying attention. By the time she got to me, she had tears in her eyes. She stood in front of me and looked up at me, with a look of sadness and helplessness that I'll never forget. She hugged me with everything she had. And I hugged her back. She held on for so long, melting into me, and thanked me endlessly. And I can't stop thinking about her. What she must be going thru with her family... the ones who are supposed to be there for her no matter what. Who does she go to when she needs advice on love, money or just life? Who does she share old memories with that only her parents would have been there for? What are her holidays like? How often does she hope for that phone call, with unconditional love on the other end? I don't know her story. But it doesn't feel like a huge leap to assume she's lost those who should love her the most and forever.

Imagine that, parents. Imagine that your child feels SO LOST FROM YOU that they sink into the arms of a complete stranger and sob endlessly just because that stranger is wearing a shirt offering hugs from a dad. Think of the depths of their pain. Try to imagine how deep those cuts must be.