New Koch-Funded Fossil Exhibit at the Smithsonian Is Curiously Quiet on Fossil Fuels.  After five years and $39 million, the Smithsonian's completely renovated Hall of Fossils is open again — complete with T. rex and a message about climate science. But though the exhibit clearly communicates the facts about human influence on Earth's climate, it is oddly quiet about the most important solution to the problem: rapidly reducing fossil fuel use.  Had David Koch's $35 million fossil-fueled contribution to the Smithsonian affected how the project's directors rewrote the story of the Smithsonian's fossils?In response to a version of this question from Joshua Johnson, host of the nationally syndicated radio program 1A, museum director Kirk Johnson answered, "There's a bright red line between what we put into the exhibit and what the funder believes, thinks, or feels .... I can tell you that David Koch had no impact on the content of the exhibit." 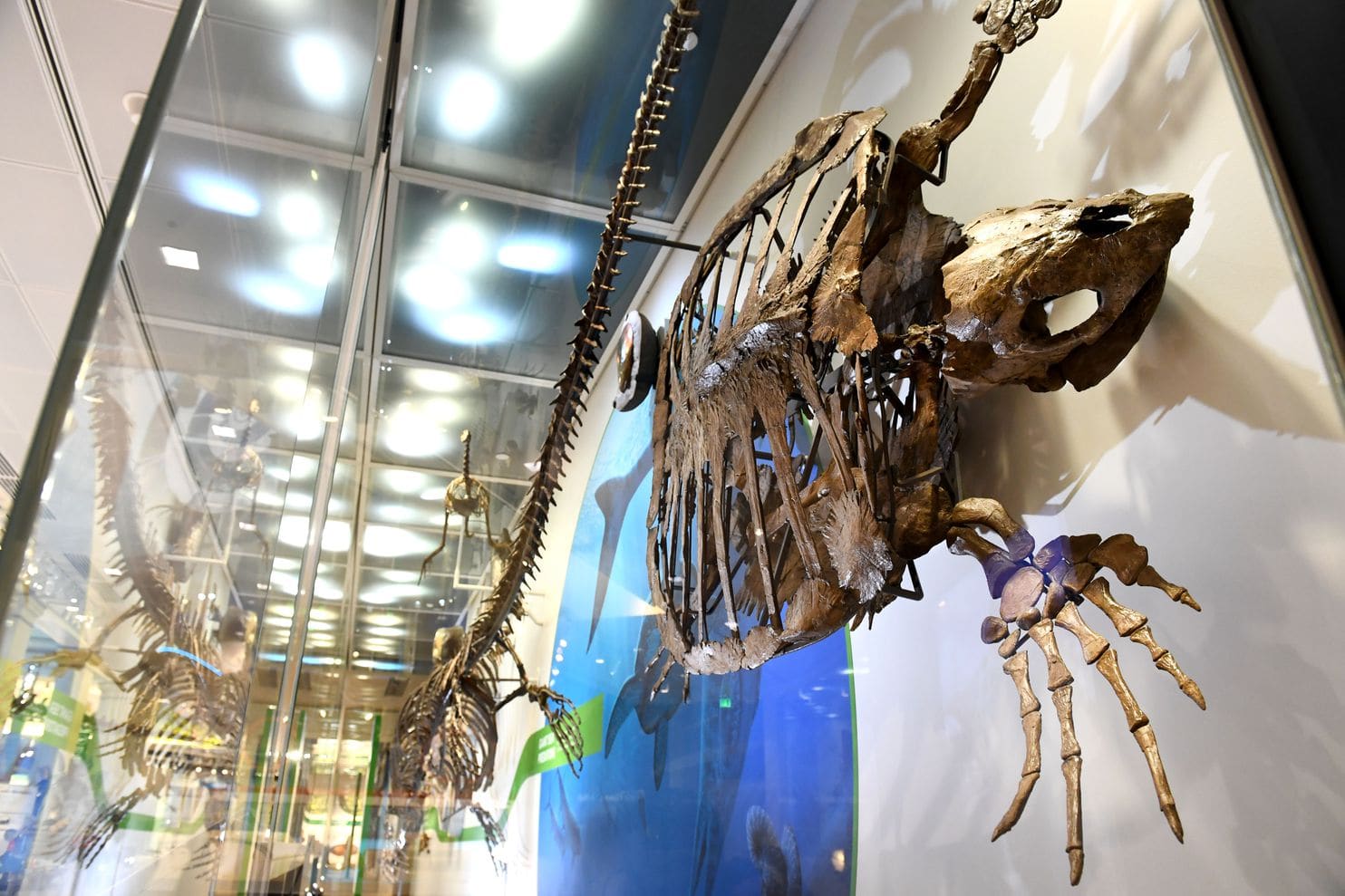 A Giant Sea Turtle that Lived 83 to 81 million years ago, found in Kansas, is part of the “David H. Koch Hall of Fossils — Deep Time” exhibition at the Smithsonian National Museum of Natural History.

For five years, The Washington Post’s Lee Powell has documented the journey of a nearly complete T. rex skeleton — from the remote reaches of Montana to small-town Canada to the Smithsonian's National Museum of Natural History in Washington, D.C. The roughly 66-million-year-old dinosaur was discovered during a hike in 1988 by Kathy Wankel, who was with her family in eastern Montana. “I think I found a megafind,” Wankel says. The T. rex ended up on display, in a lying-down pose, at the Museum of the Rockies in Bozeman, Mont. Eventually, the fossils were taken off display in preparation for a cross-country trip and a bigger stage. The journey of the T. rex included a stop in Trenton, Ontario, where a company built the steel mount that will display the bones for Smithsonian visitors to see. Because the skeleton was found on U.S. Army Corps of Engineers land, it belongs to the American people. The dinosaur is the centerpiece of the Smithsonian’s renovated fossil hall, which is more than a hundred years old. It sees some 5 to 7 million visitors a year, making the hall one of the most visited spaces of its kind in the world. This is the story of how the "the nation's T. rex” came to Washington.

The fossil hall opened June 8 after a five-year renovation. As a young paleontologist, Kirk Johnson traveled to the Arctic to excavate fossils from 50 million years ago, a time when the air was thick with carbon dioxide and so warm that even the North Pole had no ice. Johnson and his colleagues dug up fossilized crocodiles, turtles, and palm trees. “Palm trees!” Johnson recalled. “In the Arctic! . . . It blew my mind that the Earth could change that much.”

Since that expedition in the 1980s, global carbon dioxide concentrations have soared to levels not seen in the history of humankind. New temperature records are set almost every year. Savannah is turning to desert, coasts are consumed by floods, the Arctic is losing ice once more. Those ancient palms are not only evidence of how much the planet has changed in the past, Johnson said. They also are a key to understanding the changes we see today.

When the Smithsonian National Museum of Natural History took on the absorbing task of revamping its celebrated fossil hall, it was “dead obvious” that this would have to be one of the exhibit’s central themes, said Johnson, who became the museum’s director in 2012. “Paleontology is the backstory to what’s happening today,” he said. “We have a responsibility to present that science to the nation . . . and to make clear the implications for the future.”

The “David H. Koch Hall of Fossils — Deep Time,” which opens to the public on June 8, is a radically new kind of natural history exhibition. It features all the classic beasts of a traditional paleontology hall: a colossal mammoth skeleton, a long-necked diplodocus, a ferocious new T-rex. But every fossil is presented in the context of Earth’s past climates and its present crisis. Although the science of climate change has been settled for decades, exhibitions on the subject have prompted political debates. 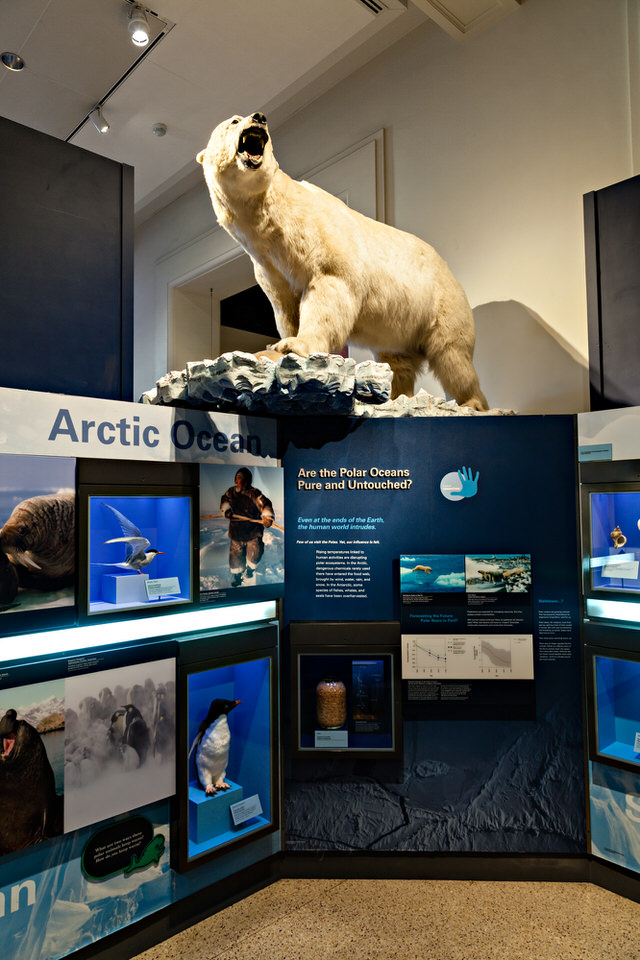 In 2007, a former administrator at the National Museum of Natural History alleged that an exhibition on the Arctic had been “toned down” by museum officials who feared angering Congress and the administration of President George W. Bush. (While the Smithsonian is not part of the government, it gets more than 60 percent of its funding from tax dollars.) The exhibition, which ran for six months in 2006, discussed the Arctic’s shrinking ice and snow cover but made no mention of what was causing the changes.

Most of the planning on the new fossil hall was done during the Obama administration, which made action against climate change one of its top priorities. But even after the inauguration of President Trump, who has questioned the scientific consensus on the subject, Johnson said that there was never any hesitation about the exhibition’s approach. “I have no doubt that the kind of individual who is inclined to deny climate change will find it in their soul to do that to this exhibit,” he said. “But this is basic science. . . . We’re actually looking at facts about our planet’s history, and then just saying it looks like these facts have implications for the future.” 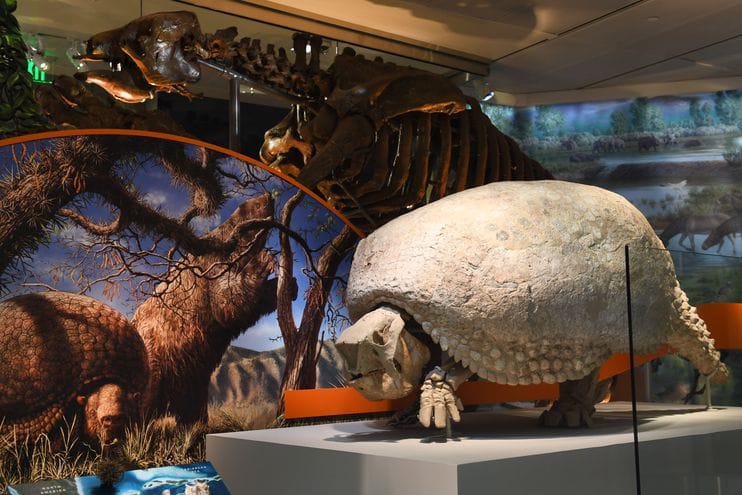 Sarah George, the executive director of the Natural History Museum of Utah, said that the National Museum of Natural History’s approach is “quite new” for the museum world. As president of the Association of Science Museum Directors and a board member for the Association of Science and Technology Centers, George has seen many institutions add climate change installations in the past few decades. But no museum she knows of has so completely integrated an environmental message into one of its main exhibits. Especially not one containing the crown jewels of any natural history museum: its dinosaurs. “I have to give them kudos,” George said, “for less focus on didactic interpretations [of the fossils] and more focus on what we really need to be thinking about today.” 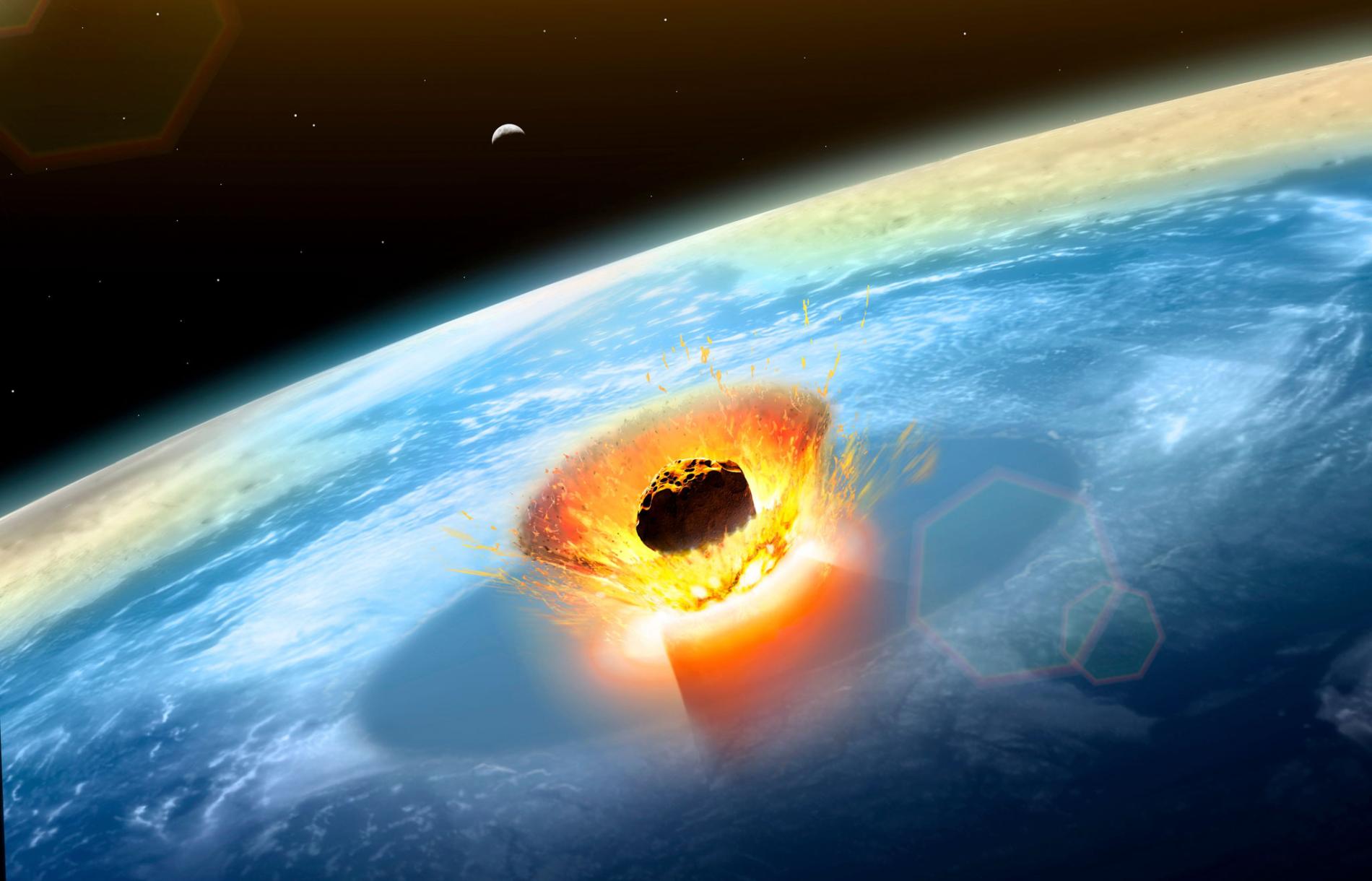 Gigantic black pillars around the hall mark displays about mass extinctions, including the asteroid impact that killed the dinosaurs 66 million years ago and humans’ devastation of animals in recent history. A scale model of a Virginia coal mine explains the origin of the word “fossil” in fossil fuels — coal beds are essentially compressed layers of dead plants, and often preserve the outlines of ancient plants in exquisite detail. Videos show stories from the sinking bayous of Louisiana, a Chicago neighborhood where residents have withstood brutal heat waves and a Texas farm that is testing a more sustainable method of growing crops that could reduce erosion and suck up carbon. An interactive game teaches visitors about the effects of climate change on their favorite things — soccer, chocolate, beaches, flowers — and discusses ways people can reduce their environmental impacts. 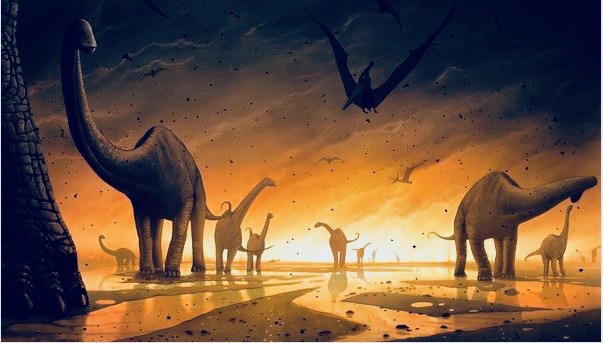 The cumulative effect is that no person will be able to walk through the hall, which Johnson said is the most visited room at the most visited science museum in the world, without contemplating climate change and humans’ role in it. “People do come for the dinosaurs,” said Siobhan Starrs, the project manager for the exhibit. “And they’re going to get a lot more than dinosaurs.” The old fossil hall was open from 1911 to 2014, without undergoing a major overhaul. Many of the original fossil mounts predated the modern understanding of dinosaurs, and new displays were added piecemeal, leading to an exhibition that lacked an overarching theme. 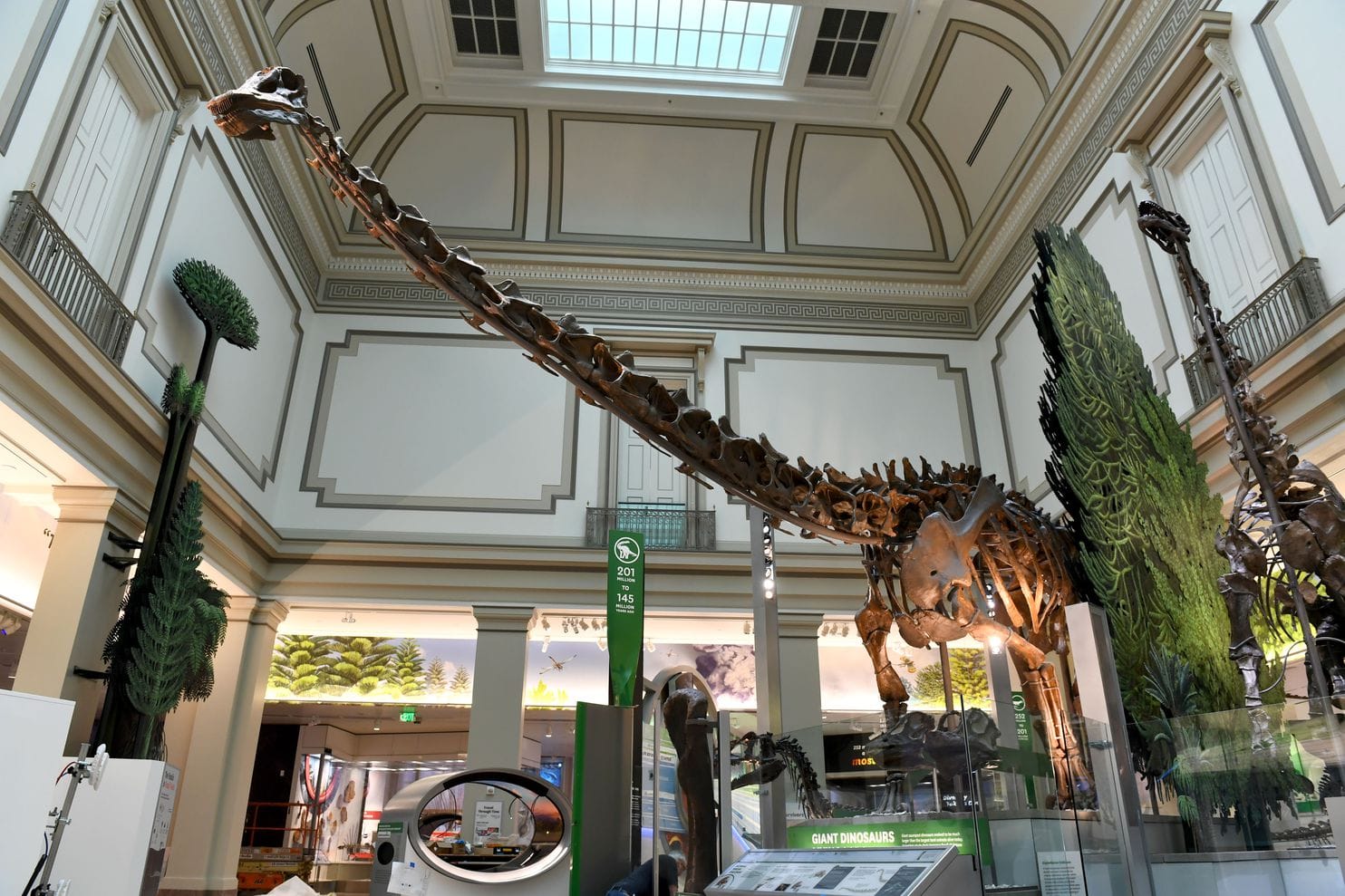 A Diplodocus that Lived 152 Million Years Ago Looms Over the

Partial updates addressed some issues, but new discoveries in paleontology kept cropping up even faster. Some of the most important realizations about dinosaurs — that they’re the ancestors of birds, that an asteroid strike ended their reign — were made after the hall was last renovated, in the early 1980s. New research on Earth’s history revealed a past that was far more dramatic than most people knew. Chief among the new discoveries is an event called the Paleocene Eocene Thermal Maximum, a specialty of curator Scott Wing. Some 50 million years ago, well after the demise of the dinosaurs, temperatures rose as much as 10 degrees Fahrenheit in a matter of a few thousand years — a rate of warming faster and more dramatic than at any time in history, except the present. “This [exhibition] is very much a creation of the scientific knowledge of the past 20 or 30 years,” Wing said. “To understand that the magnitude of human effects are really on a scale that is geological.” 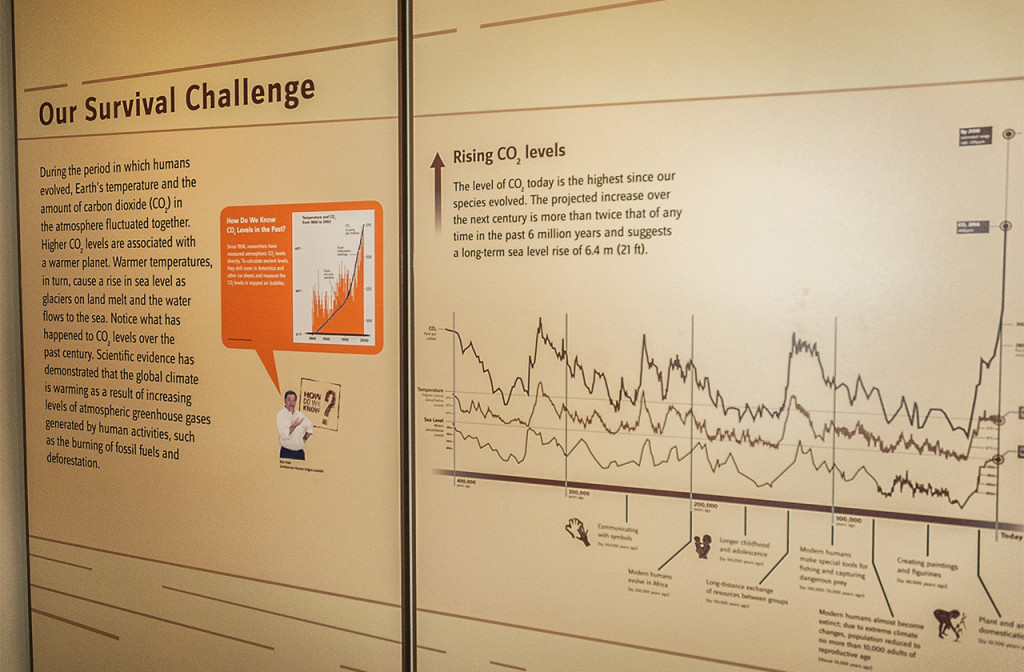 Last year, Wing worked at the National Museum of Natural History with a group of paleoclimate experts to develop a graph of Earth’s average temperatures over the past half-billion years. It is featured in the center of the exhibit, with text pointing out the link between periods of dramatic warmth and high levels of carbon dioxide. In the past, that carbon came from erupting volcanoes. Now, the exhibition notes, it comes from us. 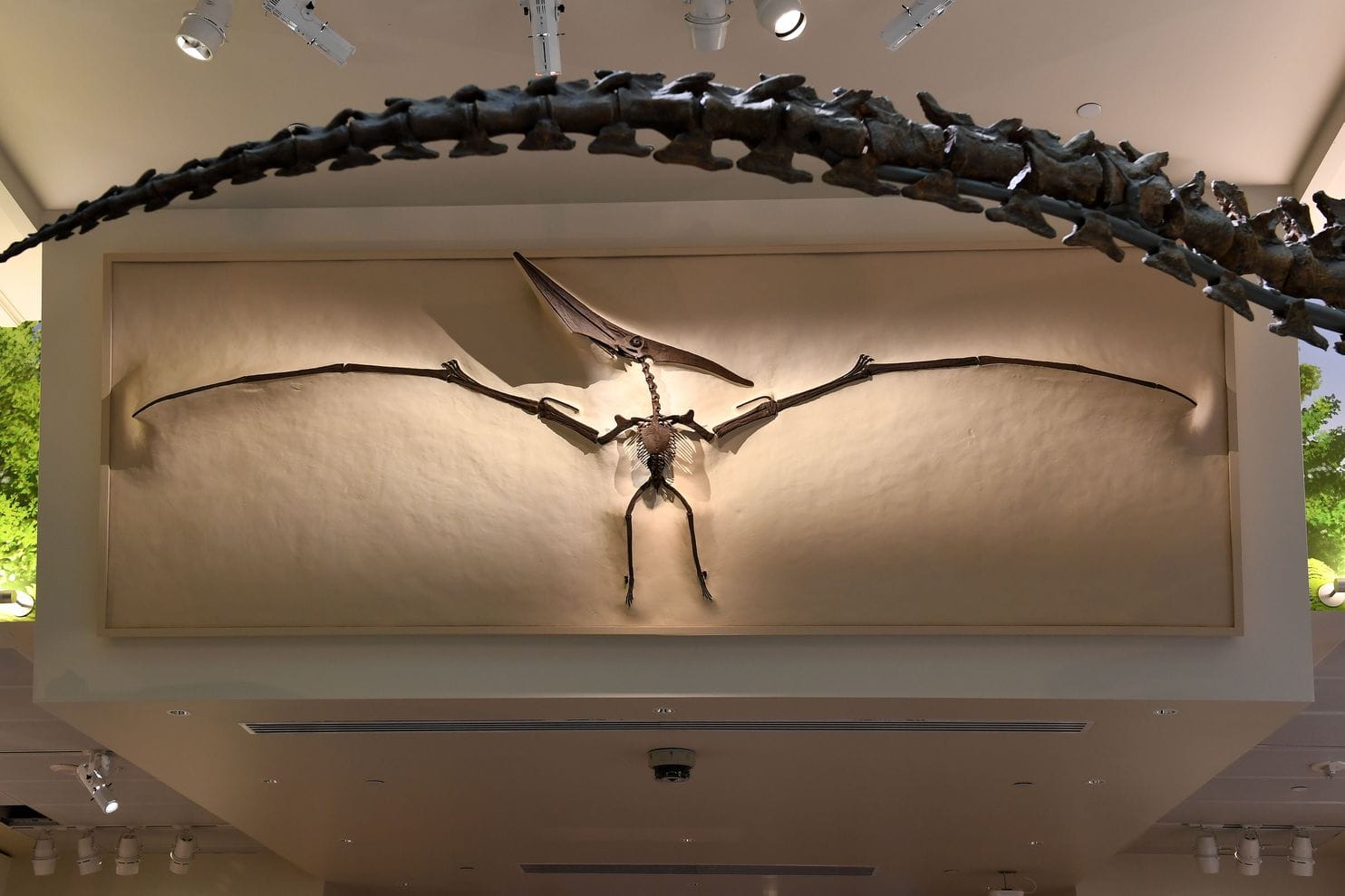