Forgotten Women of Vienna - COFL ART from Community of Lights on Vimeo.

Vienna was an intellectual powerhouse in the early 20th Century and two male artists are considered the giants of Viennese modernism: Gustav Klimt and Egon Schiele. But Vienna's Belvedere Museum is now showcasing the long-neglected contribution of women artists in that period. City of Women displays works by about 60 female artists, covering the years 1900-1938. Some works had been hidden away in attics and storerooms gathering dust. The City of Women exhibition runs at the Belvedere Museum in Vienna from January 25th to May 19, 2019.

The exhibition expands the view of Viennese Modernism and focuses on those women who actively helped shape the art scene at the beginning of the twentieth century. At that time, women who wanted to become artists were still at a severe disadvantage.

They were denied access to education and artists’ associations, and thus to exhibition opportunities. In spite of these hurdles, some of them managed to successfully build a career. In the predominantly male art business, they had to fight hard to gain a foothold.

They found training opportunities and developed strategies to market themselves. By establishing their own artists’ associations, they were able to network and become active in the art scene. Many of them exhibited at the Secession, the Hagenbund, the Salon Pisko, and the Miethke Gallery.

Despite the fact that, in recent years, the lives and works of some of these formerly renowned artists have been researched and compiled into retrospectives, their work is still underestimated in importance and barely appreciated for what it is. 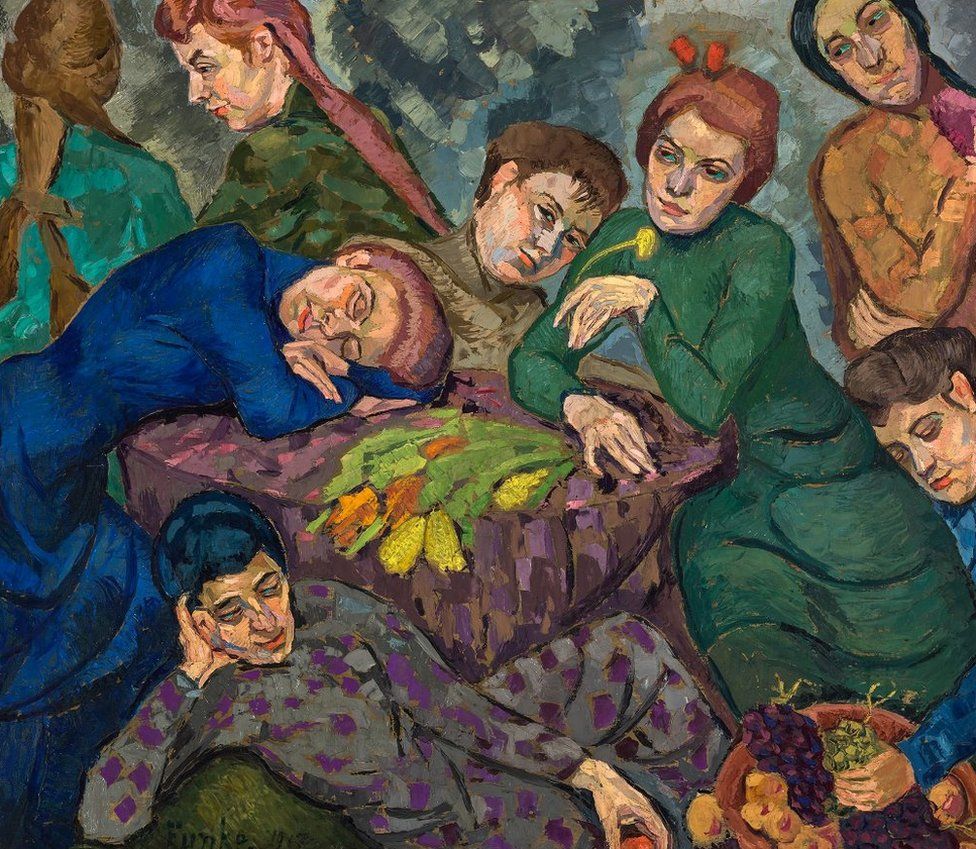 Dreams, by Helene Funke (1913) A Scene of Female Harmony

The Belvedere's artistic director, Stella Rollig, says these artists "were and still are a great inspiration, and their works have been wrongly ignored for almost a century". Struggle for equality It was hard for female artists to break through, even before the Nazis condemned modernism as "degenerate". Vienna's Academy of Fine Arts did not open its doors to women students until 1920. Ambitious women artists often had to pay high fees to private teachers. 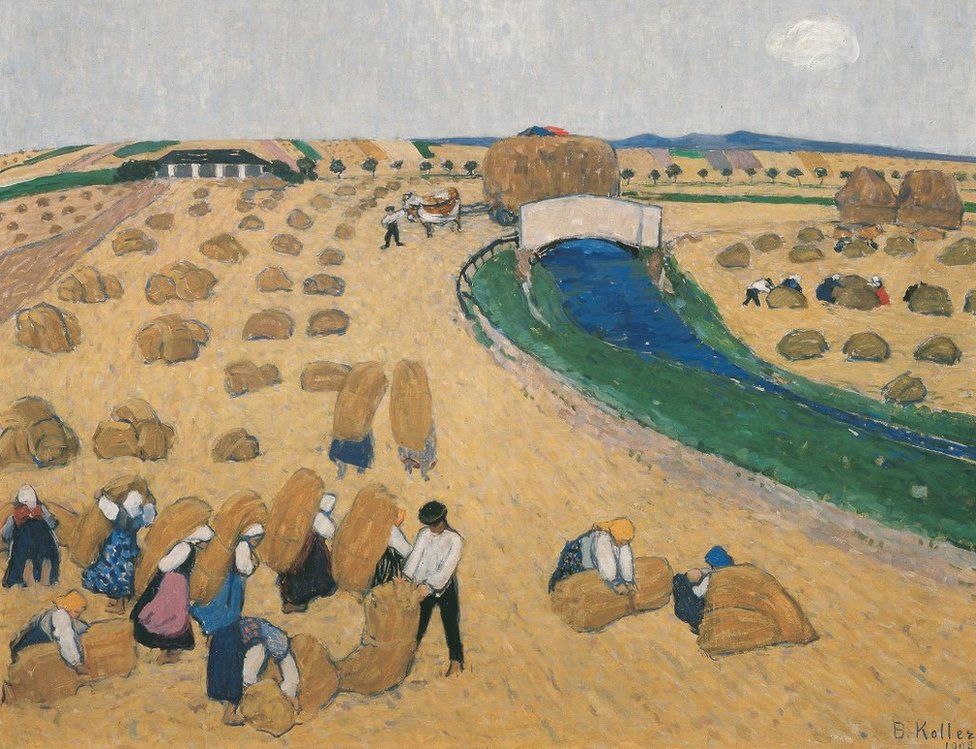 Frustrated by male prejudice, a group of women founded the Austrian Association of Women Artists (VBKÖ) in 1910. A major female contributor to Viennese modernism was Broncia Koller-Pinell. In the early 20th Century she was praised by critics and fellow artists in Vienna and internationally. Her 1908 landscape The Harvest - showing French Impressionist influence - is among her works displayed at the Belvedere. She had influence in intellectual circles; for example, she knew Klimt and Schiele, both of whom included female artists in exhibitions. After her death in 1934, with Nazi Germany's ascendancy, her reputation was largely forgotten. 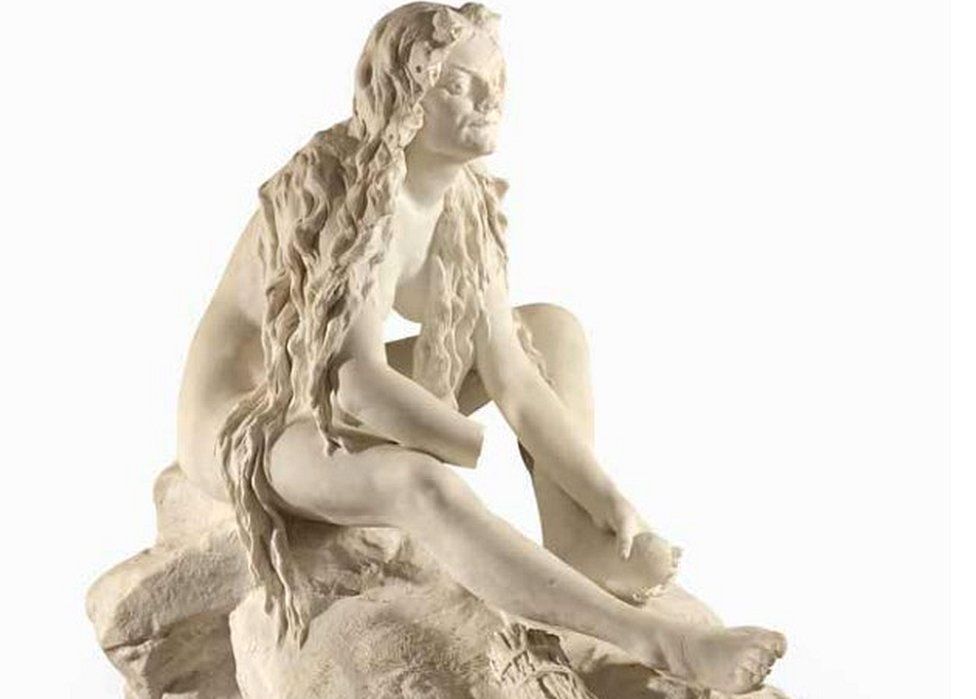 A life-size marble sculpture called Witch Doing Her Toilette on Walpurgis Night caused a sensation when first exhibited in Vienna in 1896. Some critics saw the witch's expression as too lustful, and accused artist Teresa Feodorowna Ries of using a noble stone to create a vulgar grimace. But Ries had some prominent admirers, including the great Viennese novelist Stefan Zweig. In 1938 Nazi stormtroopers ransacked Ries's studio and in 1942 she fled from Austria, but had to leave all her works in Switzerland. 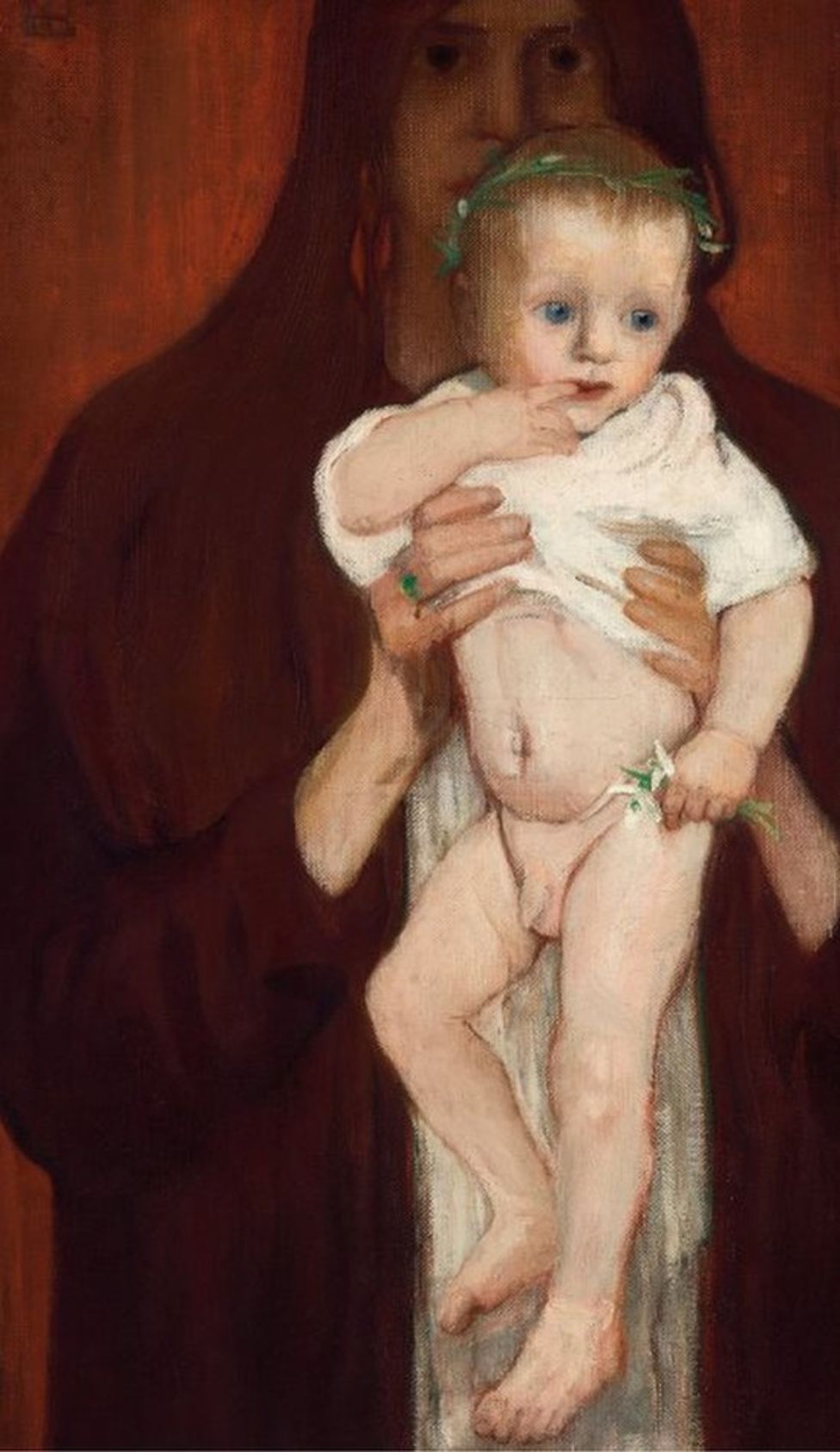 Elena Luksch-Makowsky's self-portrait with her little boy - called Ver Sacrum - looks a picture of innocence. But the 1902 work was controversial. The working mother's pose recalls the Madonna and Child theme of countless classical artists. Here the artist wears her painter's overalls - yet women at that time were expected to concentrate on raising their children. 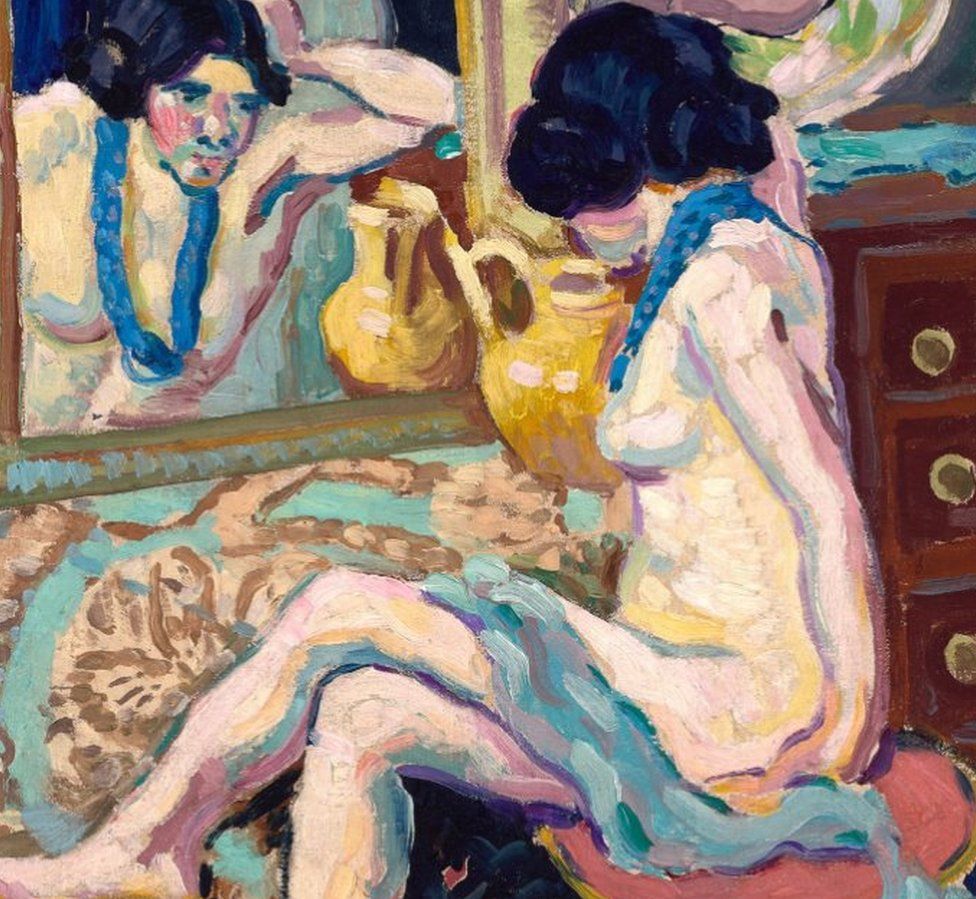 Nude Looking in the Mirror, by Helene Funke

Helene Funke, from eastern Germany, spent her early career in France, where she became interested in Impressionism and Fauvism.
Some of her paintings were exhibited in France alongside works by Matisse, Braque and Vlaminck. From 1911 until her death in 1957 she lived in Vienna. She enjoyed artistic success until the Nazi annexation of Austria in 1938. She lived as a recluse during the war.Funke's reputation was not properly restored until an exhibition in Linz showcased her work in 2007. 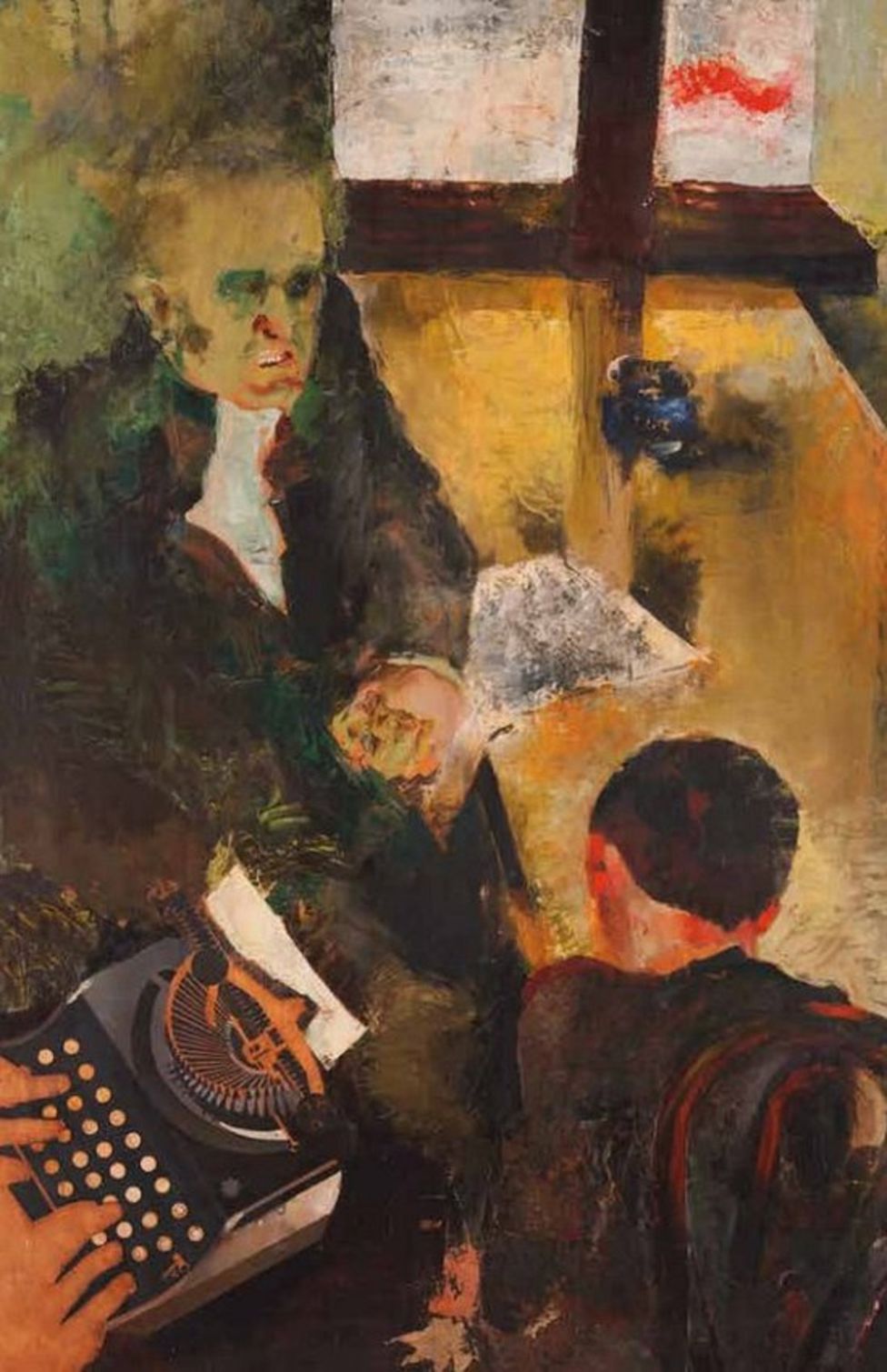 Interrogation I, by Friedl Dicker (1934)

Friedl Dicker was a left-wing Jewish artist who expressed her horror at Nazi abuses in several works, notably in Interrogation I and II, painted in the 1930s. She was interrogated and during World War Two died in the Holocaust. The Nazis deported her to Theresienstadt concentration camp in 1942, where she managed to give art classes to Jewish children. But later she was murdered in Auschwitz, along with more than a million other Jews. 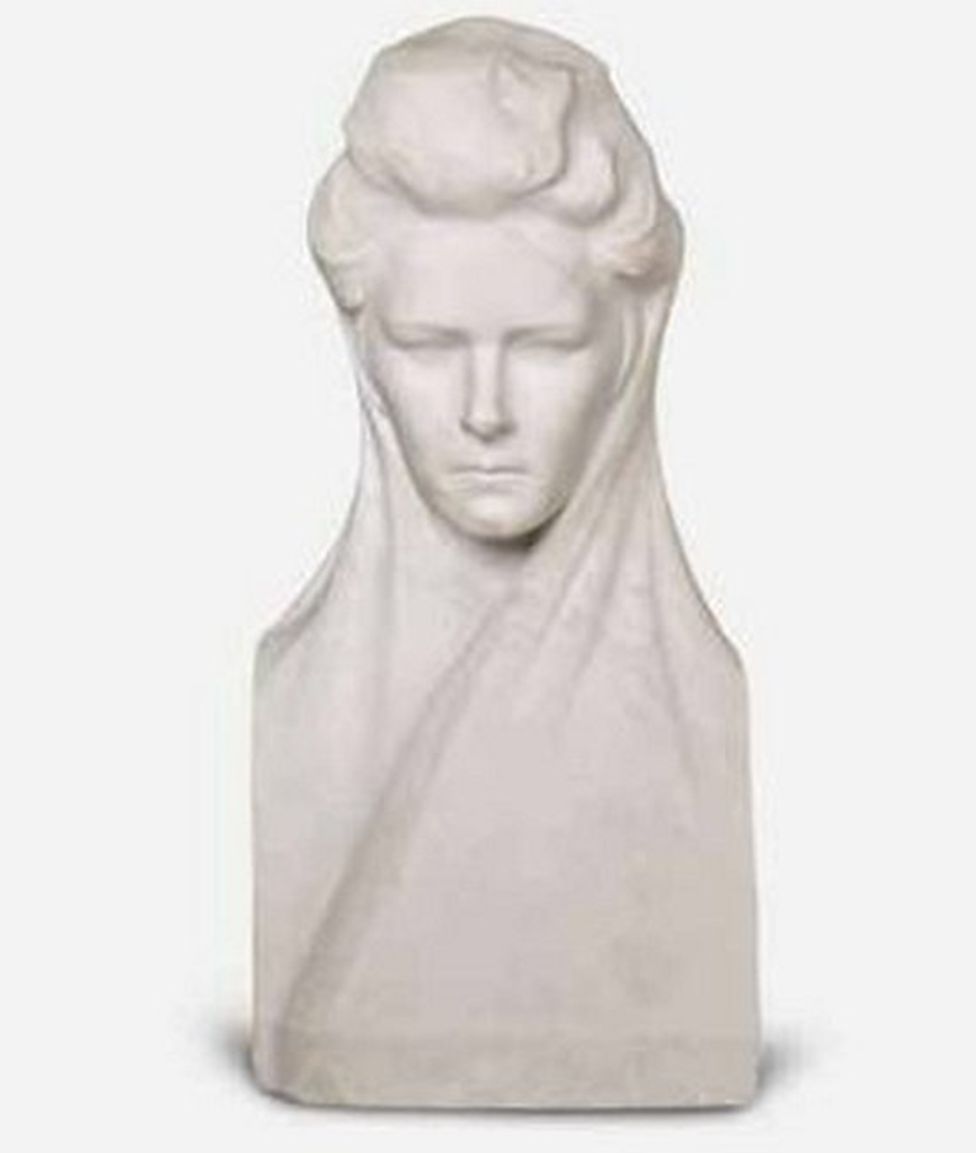 Ilse Twardowski-Conrat was another Jewish artist persecuted by the Nazis in Vienna. The sculptor destroyed her biggest works and committed suicide in 1942, after she was ordered to report to the Jewish community with her possessions. Her works were exhibited at major shows before the Nazi period. They include a bust of Empress Elisabeth of Austria (1837-1898). She spent her youth in intellectual circles and knew the composers Johannes Brahms and Gustav Mahler personally. 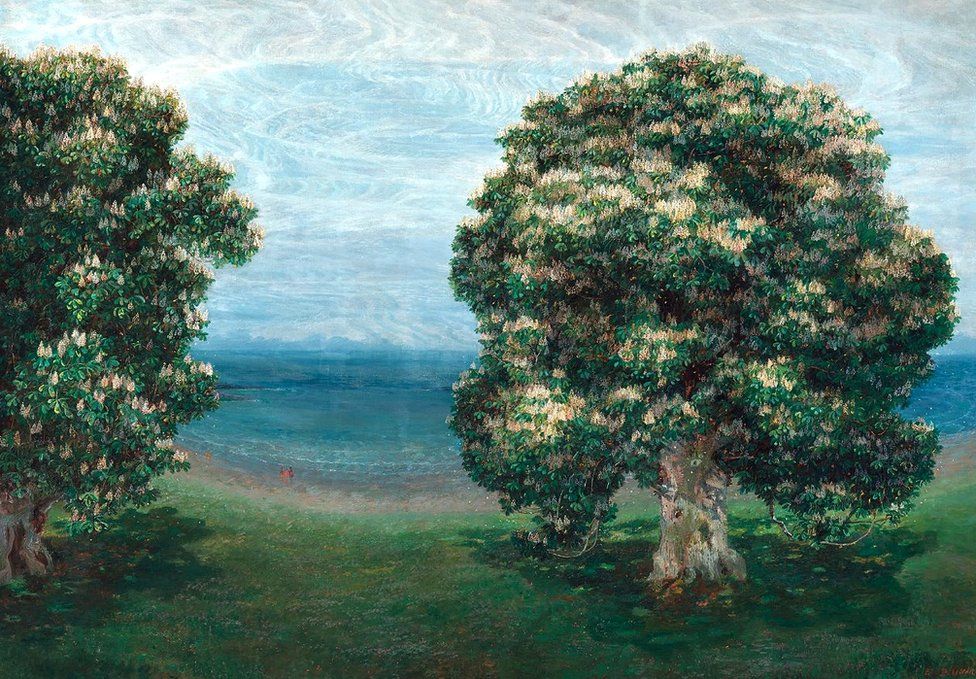 Emilie Mediz-Pelikan painted Blooming Chestnut Trees in 1900. She was admired for her use of intense colours and detailed brushwork.
Her main theme was the power of nature, and her work often featured mountains and Mediterranean scenes. Her husband Karl Mediz was also a painter.

The two Belvedere palaces were built in the early eighteenth century by the famous Baroque architect Johann Lucas von Hildebrandt to be used as the summer residence of Prince Eugene of Savoy (1663–1736). One of Europe’s most stunning Baroque landmarks, this ensemble – comprising the Upper and Lower Belvedere and an extensive garden – is listed as a UNESCO World Heritage Site. 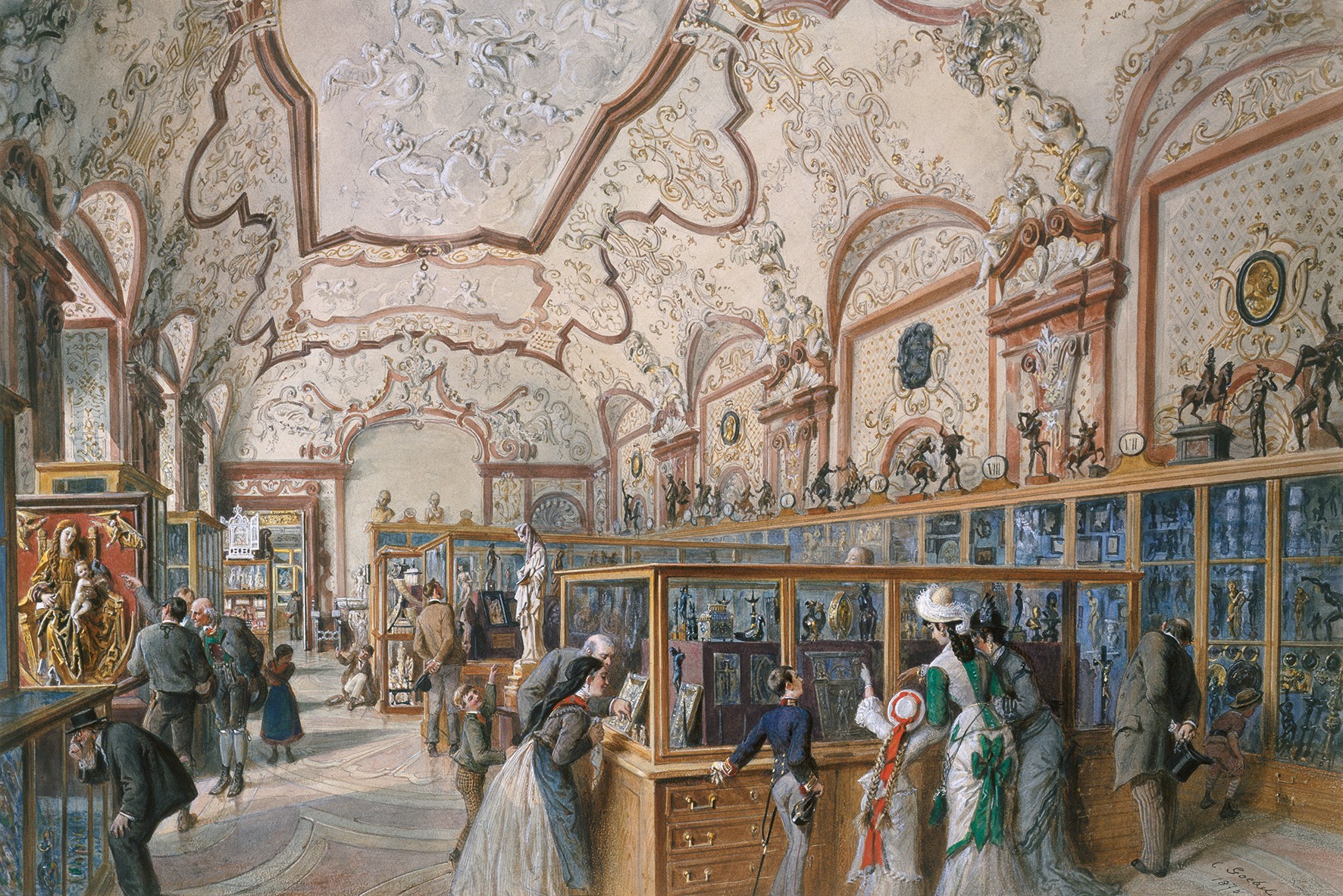 Today the Belvedere houses the greatest collection of Austrian art dating from the Middle Ages to the present day, complemented by the work of international artists such as Claude Monet, Vincent van Gogh, and Max Beckmann. Highlights from the holdings Vienna 1880–1914 are the world’s largest collection of Gustav Klimt’s paintings (including the famous golden Art Nouveau icons the Kiss (Lovers) and Judith) and works by Egon Schiele and Oskar Kokoschka. Key works of French Impressionism and the greatest collection of Viennese Biedermeier art are further attractions on display at the Upper Belvedere.

Lower Belvedere and the former Orangery are venues for top temporary exhibitions. These shows focus on presenting Austrian art in an international context, as defined in the Belvedere’s original mission back in 1903 (when it was founded as the Moderne Galerie. They comprise retrospective shows of Austrian artists, based on research into their work and significance, and major thematic exhibitions exploring key movements and epochs in art.

An insight into medieval art can be gained at the Medieval Treasury, opened in 2007 at the former Palace Stables that once accommodated Prince Eugene’s personal horses. This study collection gives the public access to the Belvedere’s entire holdings of medieval art.

The Kiss (Lovers) by Gustav Klimt is the most famous Austrian painting and the highlight of the permanent collection at the Upper Belvedere. It shows a couple swathed in richly embellished robes embracing in a meadow of flowers on the brink of a precipice. The painting dates from 1907/08 at the height of Klimt’s “Golden Period” when the artist developed a new technique of combining gold leaf with oils and bronze paint.