How to Land on Mars

After six months of travel from Earth, the InSight spacecraft landed on the red planet on Monday, November 26, 2018. About three hours before landing, mission navigators adjusted InSight’s timing or alignment to avoid any perilous Martian dust storms. Then they separated from the cruise stage 13 ¾ minutes before landing. Before InSight entered the Martian atmosphere, the spacecraft will split away from its solar-paneled cruise stage and switch to battery power. Light and communications will now take 8 minutes and 7 seconds to reach Mars from Earth. 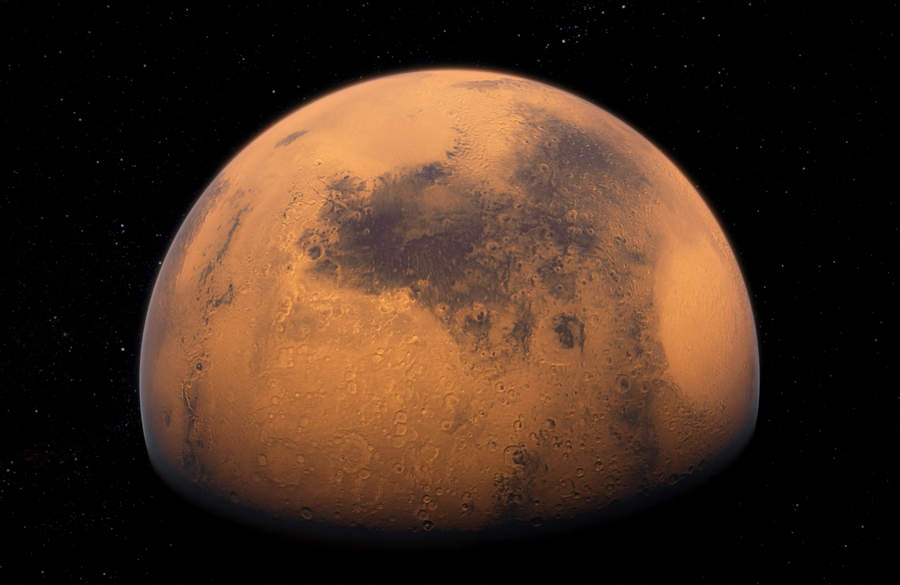 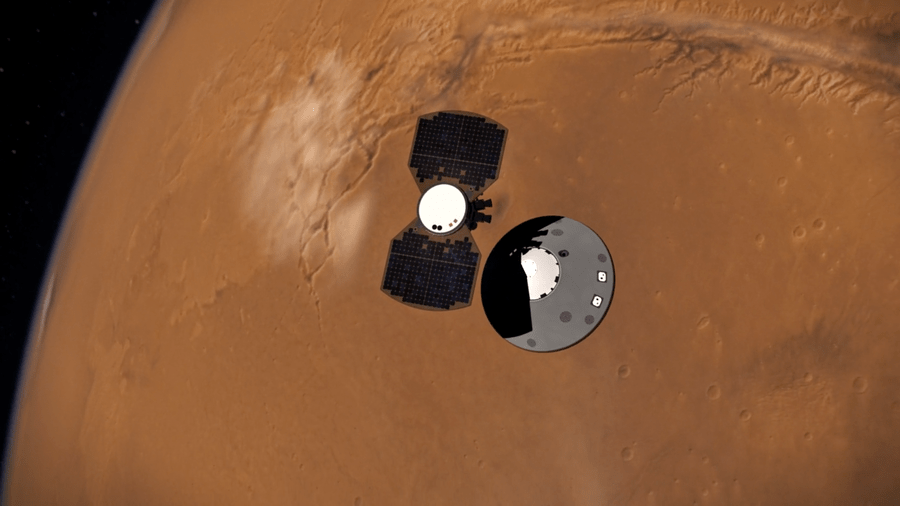 Deploy a parachute 3 minutes, 7 seconds before landing. InSight will slow down quickly as it tears through the Martian atmosphere, then pop a supersonic parachute about seven miles above the surface. 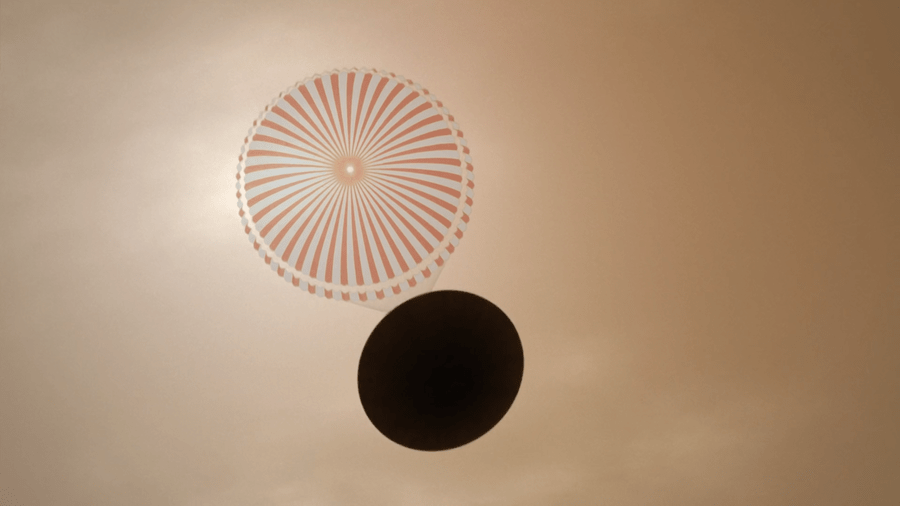 Drop the heat shield 2 minutes, 52 seconds before landing. A burst of pyrotechnics will release InSight’s heat shield, newly scarred from the heat of entry. The shield is thicker than on previous missions, in case InSight is forced to descend through heavy dust. 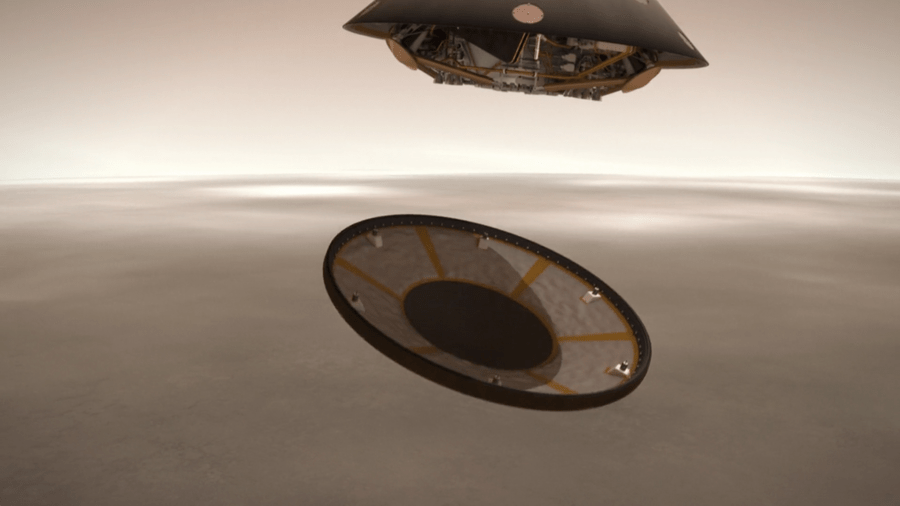 Extend the legs 2 minutes, 42 seconds before landing. Ten seconds later, more pyrotechnics will extend the spacecraft’s three shock-absorbing legs. After that, InSight will turn on its ground-sensing radar. 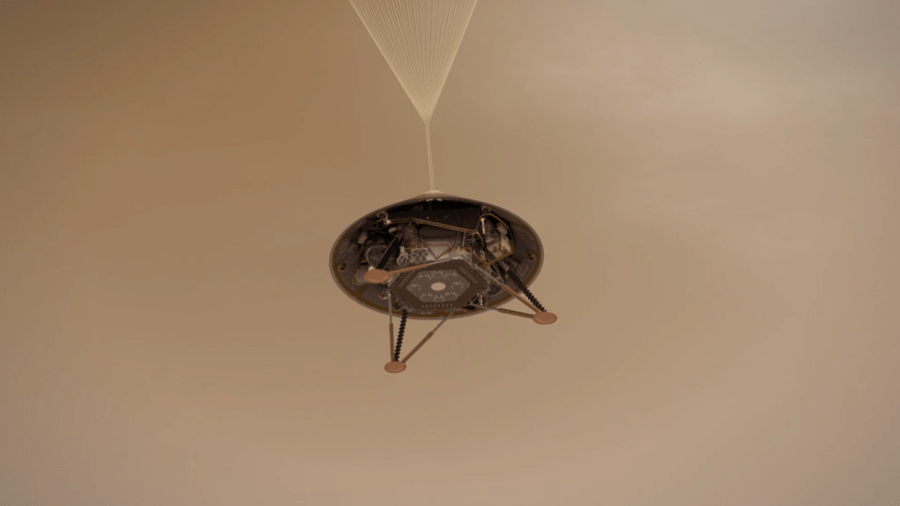 Fall out of the back shell 45 seconds before landing. Less than a minute before landing, InSight will drop and gain some distance from its parachute and back shell by freefalling for a moment. 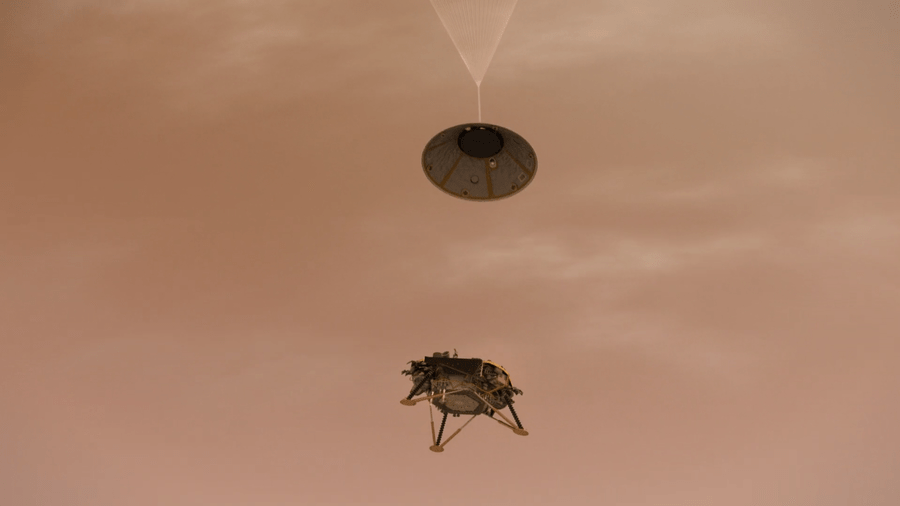 Fire rockets 44 seconds before landing. The lander will fire 12 small rockets to slow down and move farther away from the falling parachute.

Descend slowly 15 seconds before landing.  After stopping its horizontal motion, InSight will begin a smooth descent of about eight feet per second. 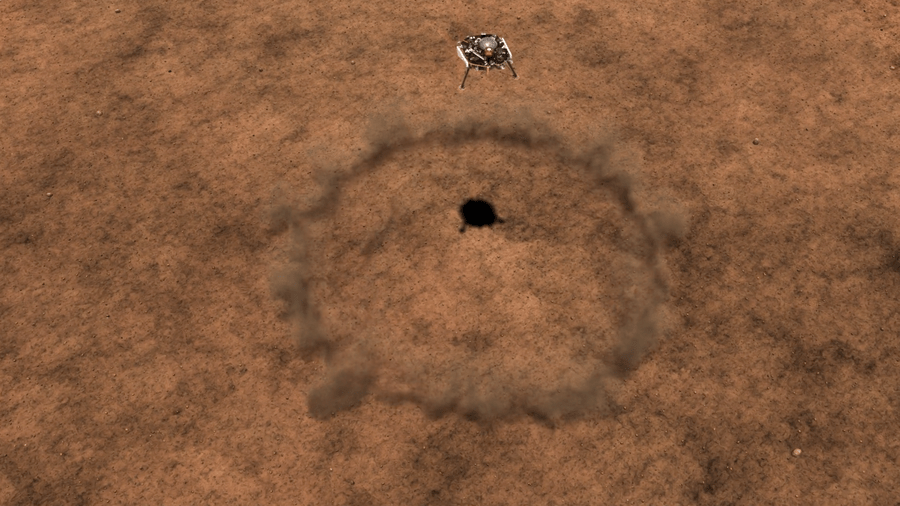 Land on Mars. NASA expects to receive confirmation of landing on Monday at about 2:53 p.m. Eastern Time. If InSight touches down successfully, it will be the first Mars landing since the Curiosity rover's complex landing in 2012. 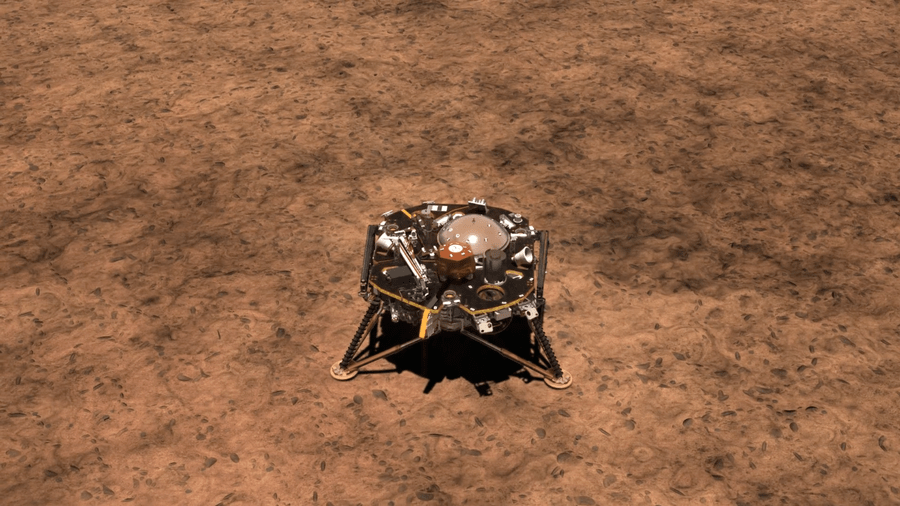 InSight’s planned landing area 20 miles. InSight is aiming for a broad equatorial plain called Elysium Planitia. The plain could make for boring pictures, but it is considered an ideal landing spot for a mission to study the planet’s interior. 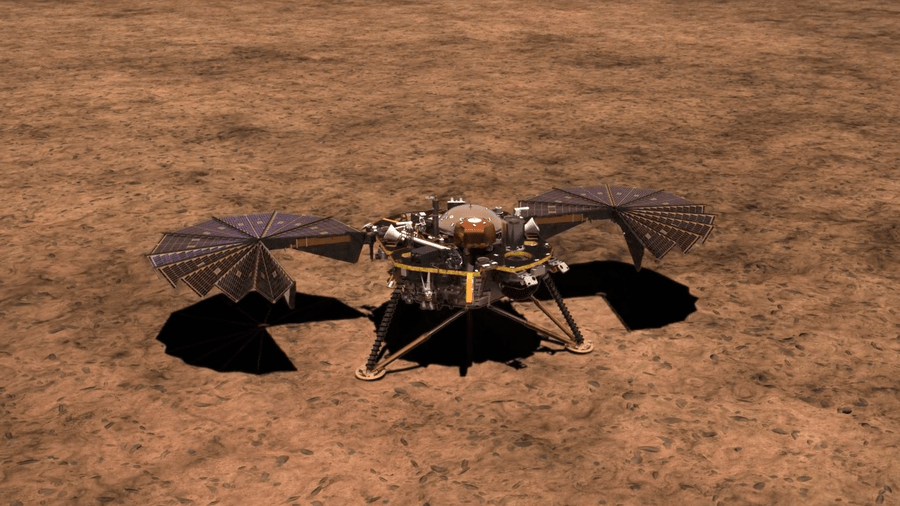 Unfurl solar panels 20 minutes after landing.  After waiting several minutes for dust kicked up by landing to disperse, InSight will unfurl its two solar panels. The lander will then spend a couple days checking its systems and taking images of the landing site. 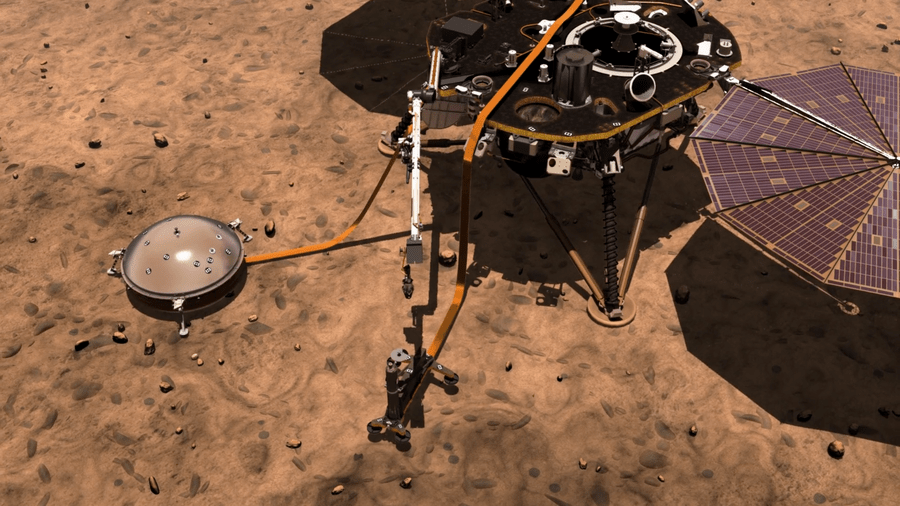 In the days and weeks after landing, InSight will take stock of its surroundings, precisely measure and photograph the area around the lander and then use its robotic arm to carefully place three instruments on the Martian surface. An exquisitely precise seismometer under a protective dome will listen for marsquakes and a burrowing heat probe will measure the inner temperatures of the planet. 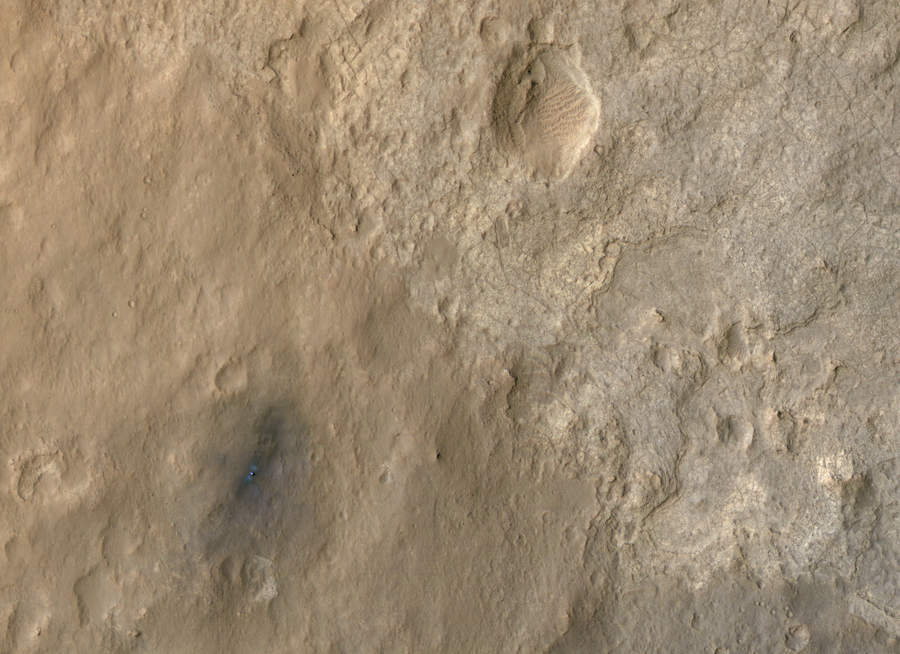 The Curiosity rover touched down in August 2012 in Gale Crater, about 340 miles south of InSight’s planned landing site. Curiosity is visible as a small dot inside the dark landing patch above, where bright surface dust was blown away during landing.

InSight’s design borrows heavily from the successful Phoenix mission, which touched down near the Martian north pole in 2008. An orbiting spacecraft photographed Phoenix and its parachute descending in front of Heimdal crater, above. 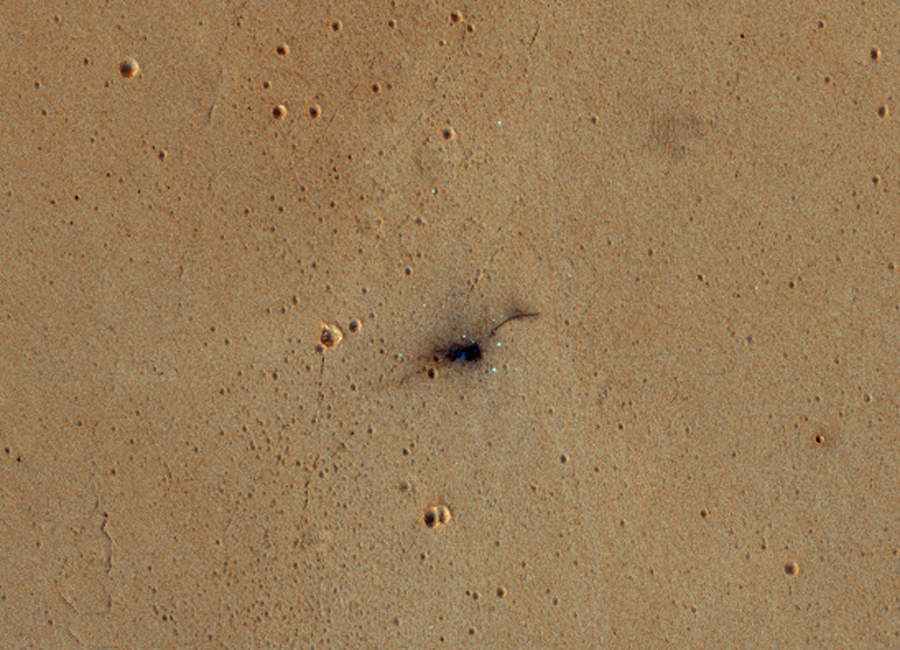 In 2016, the Schiaparelli lander crashed into Mars after conflicting estimates of its altitude caused it to drop from its heat shield too early. And in 2003, the Beagle 2 lander touched down successfully but was unable to communicate with Earth after it failed to deploy all of its solar panels. 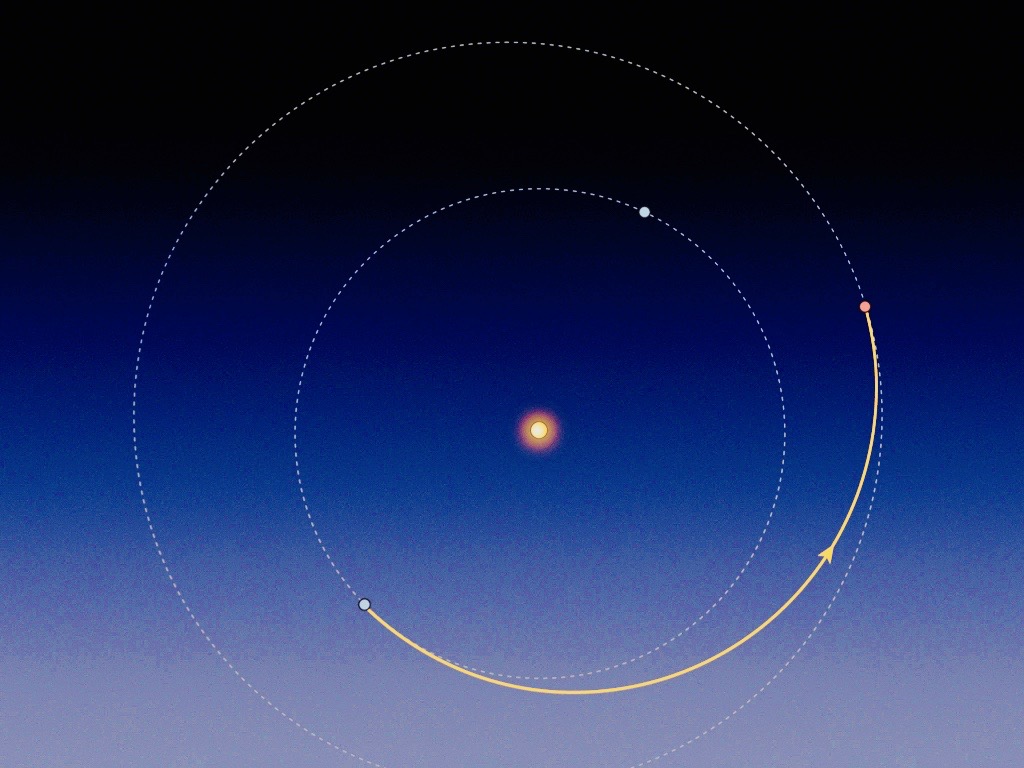 Beagle 2 is the small white dot at center in the image above. It takes six months to Mars.  Mars has an elliptical orbit that brings it close to Earth every two years. InSight’s launch was timed to this window to minimize travel time. Mars was at its closest to Earth in late July and will return again in 2020, when the next Mars rover (and helicopter) is scheduled to launch. InSight’s journey to Mars was relatively quick, compared with other missions that launched in 2018. The BepiColombo spacecraft will take seven years to reach Mercury and the Parker Solar Probe will spend seven years spiraling inward to touch the sun. 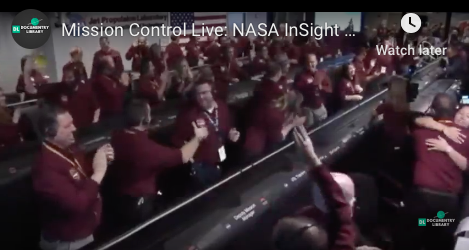