The original Statue of Liberty torch — 3,600 pounds of copper and glass, and 16 feet tall — is being moved to the other side of Liberty Island. It took two years of worry and strategizing, but the day of truth is about to arrive for Doug Phelps. As part of a $100 million upgrade, the construction crew is moving the original Statue of Liberty torch from its resting place inside the statue’s pedestal, where it’s been on display since it was replaced in 1986, and relocating it to a new museum in Liberty Island.  A crew of 15 is moving  the 3,600-pound torch, made of copper and amber glass, from one side of Liberty Island to the other. 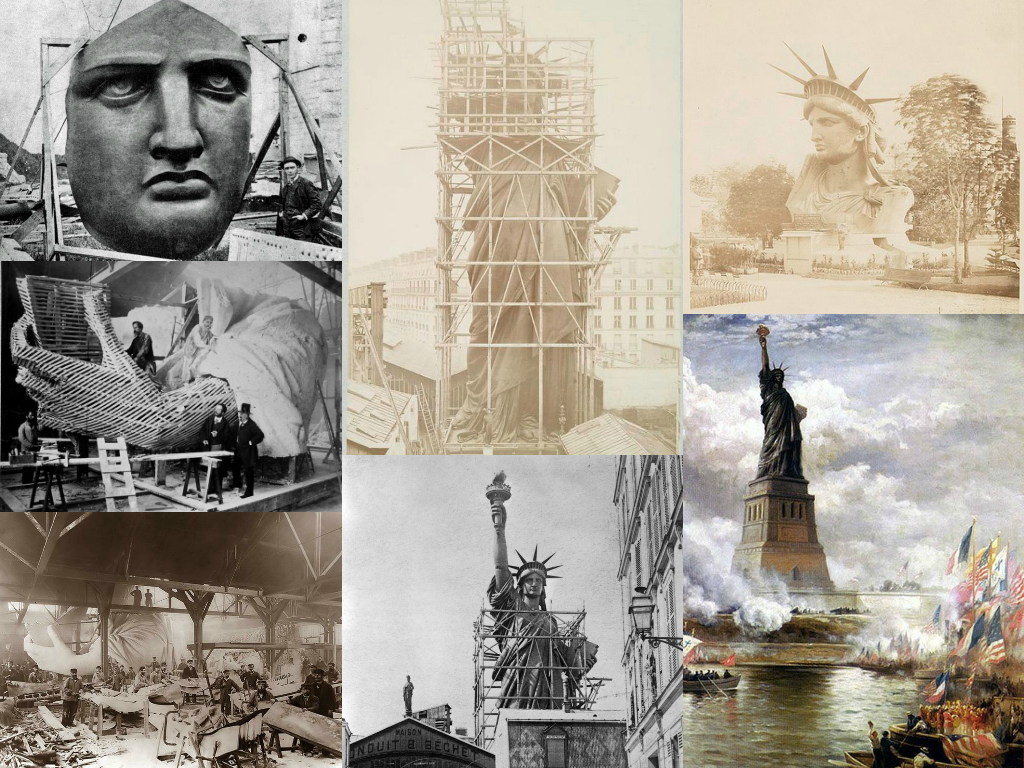 As designed by Frederic Auguste Bartholdi and delivered to America in 1885, the torch is more than 16 feet tall and 12 feet across and weighs 3,600 pounds. In 1885, the torch was transported in crates by ship from France to what was then a military base known as Bedloe’s Island. It was made of solid copper sheets, and about a month before the public dedication of the statue in 1886, the U.S. Lighthouse Board cut two rows of staggered holes for electric lights inside the flame. But the light was scarcely visible from the harbor, and the results were disappointing. 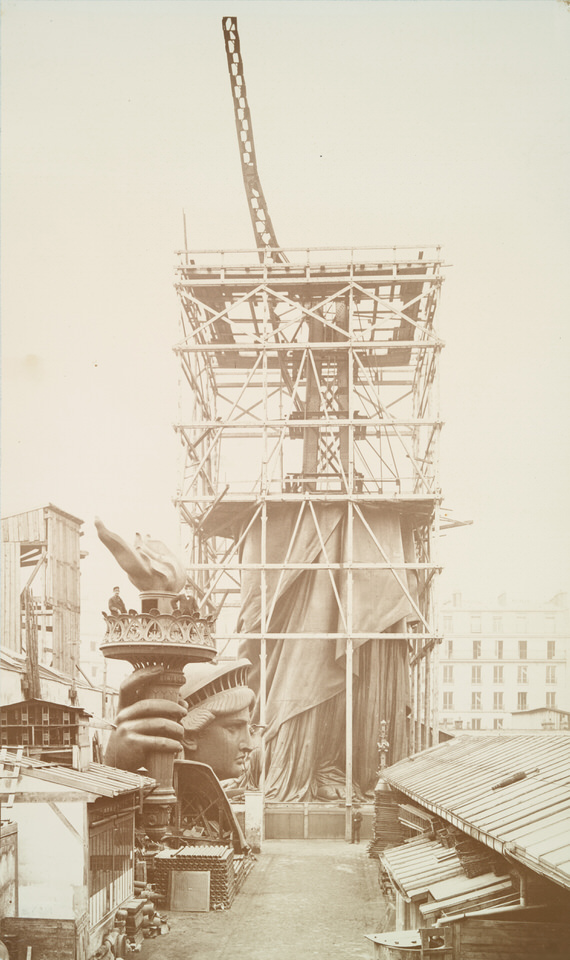 The Statue of Liberty in Paris Being Assembled in 1883

In the early days, the military opened the torch up to V.I.P. visitors, who would climb a 40-foot ladder into it and gaze onto New York Harbor from its ornate balcony. “But you had to be pretty special to do that,” said John Piltzecker, superintendent of Liberty National Monument. 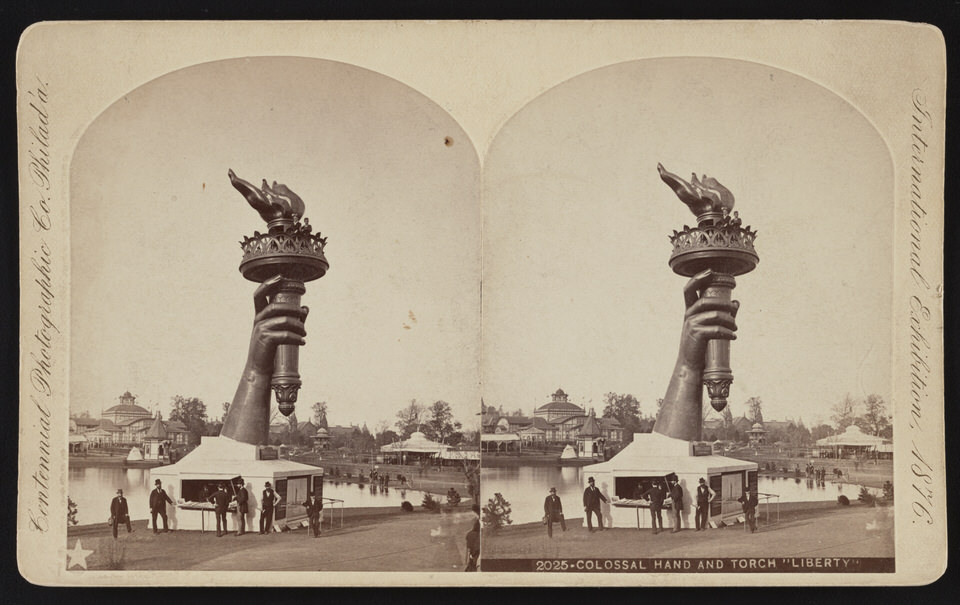 on Display at the 1876 Centennial Exhibition in Philadelphia

In 1916, the flame was redesigned by Gutzon Borglum, the creator of Mount Rushmore, to accommodate windows. They were beautiful, but they weren’t done properly, and every time it rained, the torch leaked. Then in July of that year, the Black Tom explosion — an extraordinary but mostly forgotten disaster — rocked the harbor when saboteurs destroyed an American munitions plant across the water in Jersey City. The explosion destroyed the depot, breaking windows as far away as Manhattan and sending debris flying into the statue.

The Statue of Liberty remained standing, but the torch was weakened, which gave the military an excuse to put a stop to the visits. It was closed and never reopened, except to maintenance workers. “I can’t tell you how many people have said to me, ‘I’ve been up to the torch,’” said Stephen A. Briganti, president and C.E.O. of the Statue of Liberty-Ellis Island Foundation. “I say, ‘No, you probably haven’t, unless you’re really old.’” Apparently people confuse it with trips they’ve taken to the crown, which is still open today. Or maybe they’ve seen Alfred Hitchcock’s 1942 film “Saboteur” one too many times, which features a dramatic but fictional standoff in the torch. 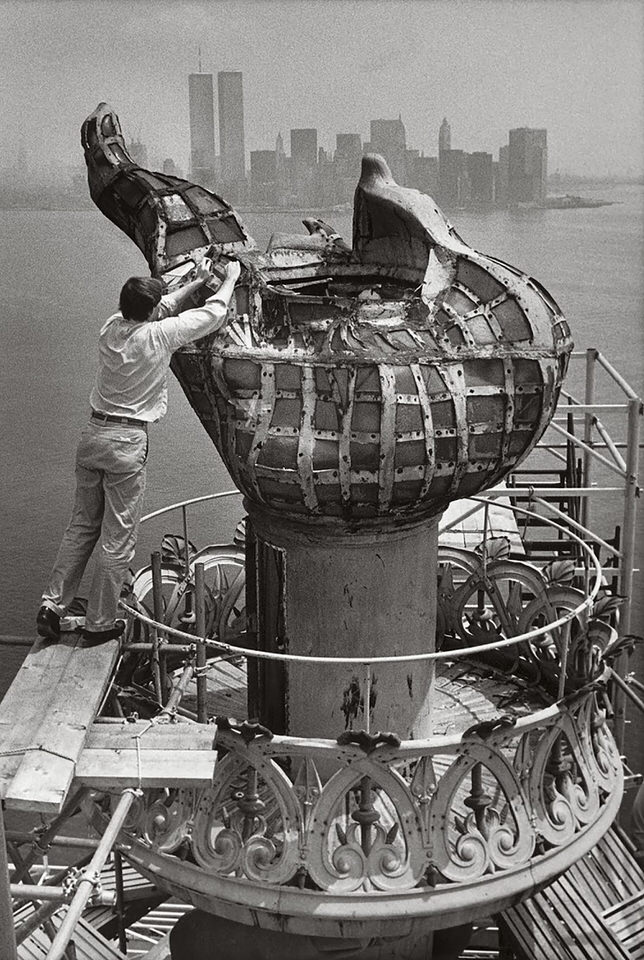 In Preparation for the Removing of the Torch in 1985, Individual Panes of Glass are Taped so They Won't Fall Out of Place

Even without visitors, the torch fell into disrepair over the years, and in the 1980s, the Liberty Island Foundation was formed to raise money to restore the statue and replace the torch for its centennial celebration. The island was closed, the statue surrounded by the largest scaffolding ever constructed up until that point and the torch gently lowered by crane. 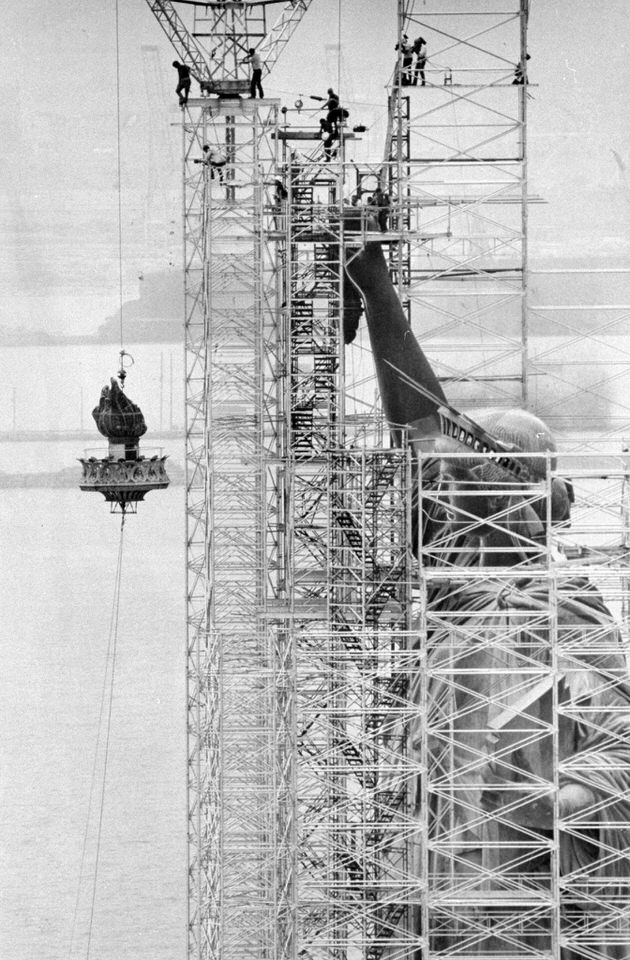 The Torch was Lowered During Repairs in 1984

"On July 4, 1984, with about 1,000 people sitting out there and some of us very nervous this thing would just fall on the floor, it was lowered,” Mr. Briganti said. A new torch, without windows and gilded in gold — part of Bertholdi’s original, unexecuted plan — was placed in Lady Liberty’s hand the following year. The old torch went on a tour of the country; it led the Rose Bowl parade in 1985.

On its return to New York, it was moved into the statue’s pedestal — after a trough was dug and the grade lowered, since the torch was too big to fit through the elaborate bronze doors. A museum was built around the torch on the second floor of the building. But with the number of visitors to the island growing every year — currently around four million — a new museum at a different site on the island is scheduled to open in May 2019. The original torch will be its centerpiece. 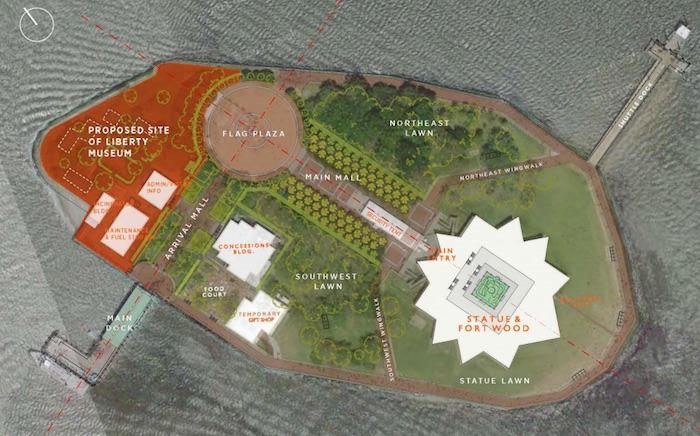 This time around, the Park Service didn't want to close the island to move the torch — there are as many as 25,000 visitors on the busiest days — so Mr. Phelps and his team came up with a plan to keep everyone happy. Over the past two weeks, from the park’s 4 p.m. closing time until 2 a.m., workers built a number of temporary rooms to store equipment and tools. Then, using a small Spyder crane that can fit inside the building, the team took the torch apart in two pieces — one consisting of the flame and tube that holds it, the other the base and balcony. A cradle made of foam, nylon straps and other soft materials was wrapped around each piece. 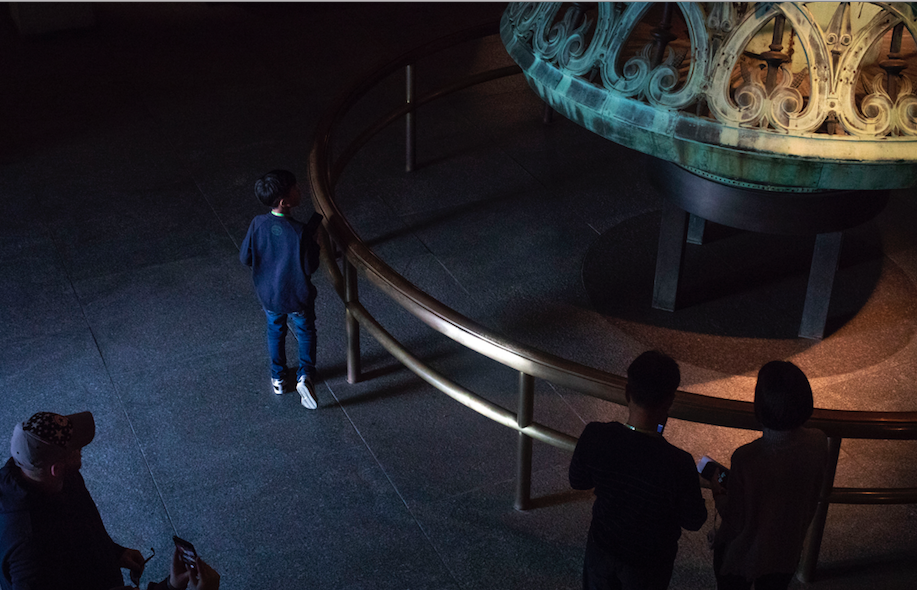 The night before the move, after all the tourists have left the island, the flame will be hoisted outside by crane. The base, far too wide to fit through the doors, will be turned on its side and brought out on neoprene skates, with two inches to spare. Both pieces will be lifted by crane and placed on a special hydraulic transport vehicle to guard against bumps and then driven across the plaza. Aluminum panels — precursors to the windows in the new museum — will be removed, and the two pieces lowered by crane into the torch’s new home. 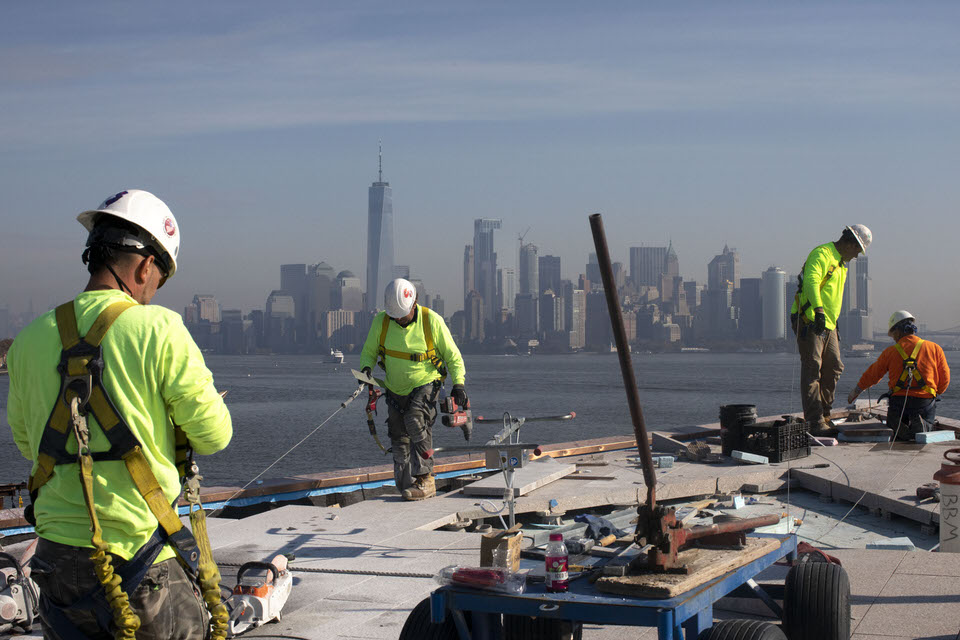 Construction Workers Work at the New Statue of Liberty Museum

“It’s a piece of cake,” joked Mr. Phelps, who is used to moving industrial and medical equipment. He said the closest thing of such historical significance he's ever moved was a statue of President Garfield from a hotel in Long Branch, N.J. “The issue here is it’s a precious treasure for our country,” he said. “This is not the most difficult thing we’ve ever moved. But certainly it’s the most important.”

RELATED:             AUGUSTE BARTHOLDI - THE ARTIST BEHIND THE CREATION OF THE STATUE OF LIBERTY