People across the world are gathering together today to light lamps, feast on sweets and set off fireworks. It’s to mark the most important day of Diwali, the five-day festival of lights. Diwali comes from the Sanskrit word Deepavali, which translates as "rows of lighted lamps". It marks the beginning of spring in the southern hemisphere and coincides with the Hindu New Year. It also celebrates the spiritual triumph of light over darkness, and knowledge over ignorance. Diwali’s Light Festival is celebrated everywhere with Hindu, Sikh or Jainist populations, most notably in Asia. 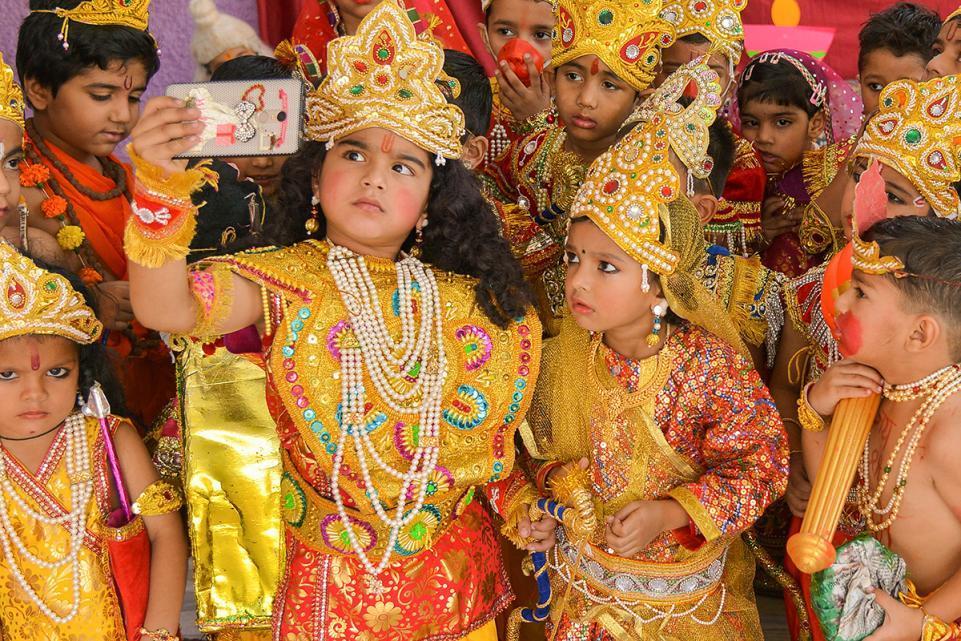 Different legends and traditions are tied up with the festival, which is celebrated by a number of religious groups. Hindu mythology includes the tale of deities Rama and Sita, who were exiled for 14 years. Diwali is a celebration of their return. Many Hindus also associate the festival with Lakshmi, the goddess of wealth and prosperity.

Diwali, Divali, Deepavali is the Hindu festival of lights, usually lasting five days and celebrated during the Hindu Lunisolar month Kartika (between mid-October and mid-November). One of the most popular festivals of Hinduism, Diwali symbolizes the spiritual "victory of light over darkness, good over evil, and knowledge over ignorance".

Sikhs have also celebrated the festival for centuries, but over the years they used it to mark Guru Hargobind Singh’s release from prison in 1619. Jains celebrate the moment that their religion’s founder, Lord Mahavira, reached a state of nirvana. But although the specifics are different, for Hindus, Sikhs and Jains alike, Diwali symbolizes the victory of good over evil. 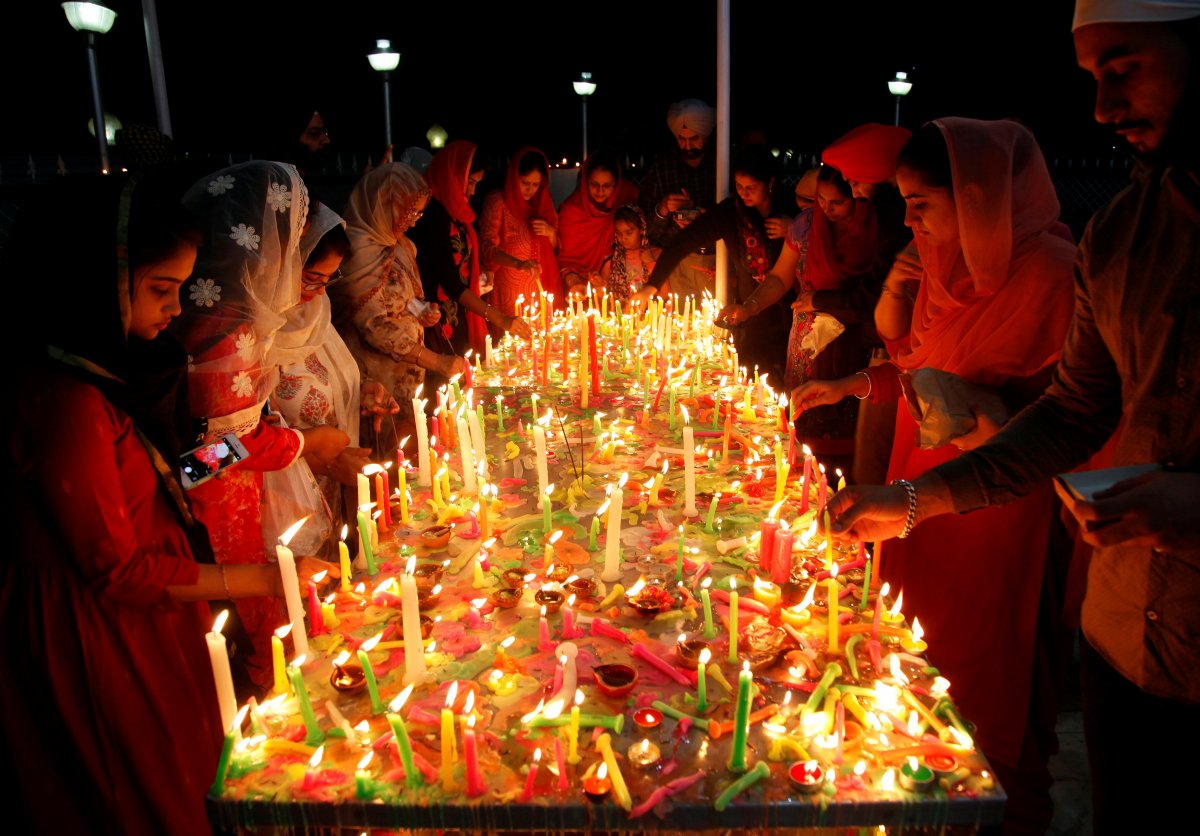 The festival is celebrated in a number of different ways, with each day having a different set of rituals. Celebrants decorate their homes with diyas—a kind of clay oil lamp—as well as candles and lanterns. People come together underneath firework displays, and huge feasts are prepared. Parades, music and other events are designed to bring communities together.

On the third day, the height of the festival, elderly family and community members are visited by the young. Feasts are held, and in the evening people put on their best clothes and jewelry. A dazzling number of lamps are lit to illuminate houses, streets and even rivers, as fireworks light up the night sky. However, modern concerns are now being weighed against these ancient traditions. Air pollution and burn injuries caused the Supreme Court of India to ban the sale (although not use) of fireworks in Delhi during Diwali in 2017. 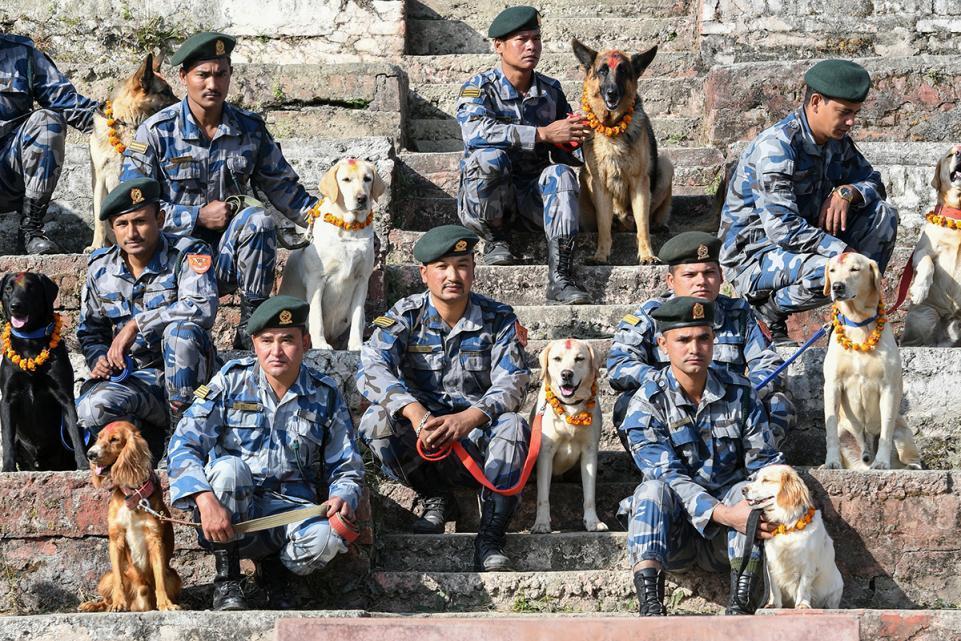 Nepal Armed Police dog handlers and their dogs with vermillion on their foreheads and marigold garlands placed around their necks pose for a picture at the Armed Police Dog Training School in Kathmandu. 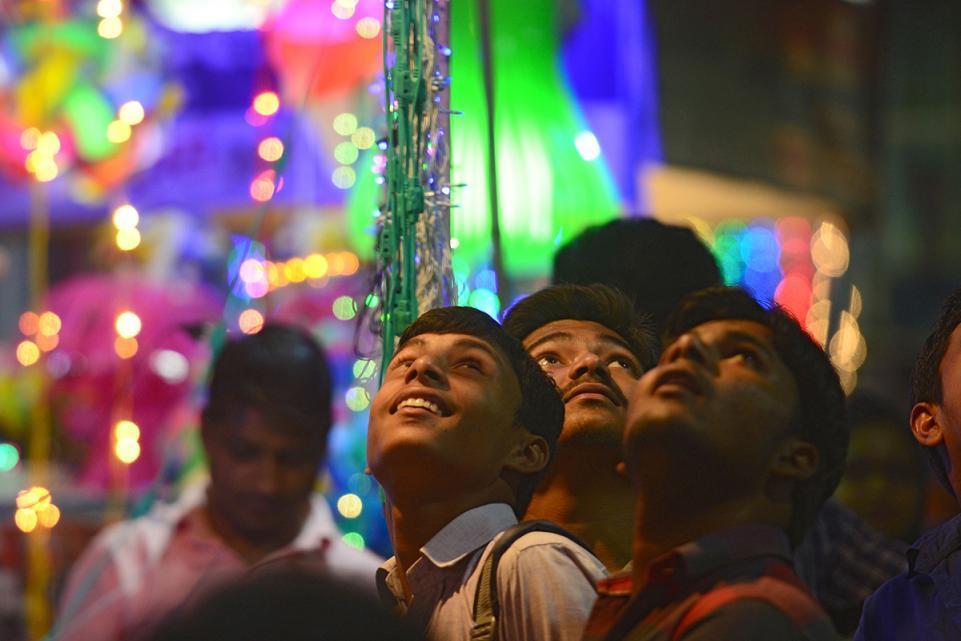 Indian youths look at decorative lights at a market ahead of Diwali festival celebrations, in Allahabad. 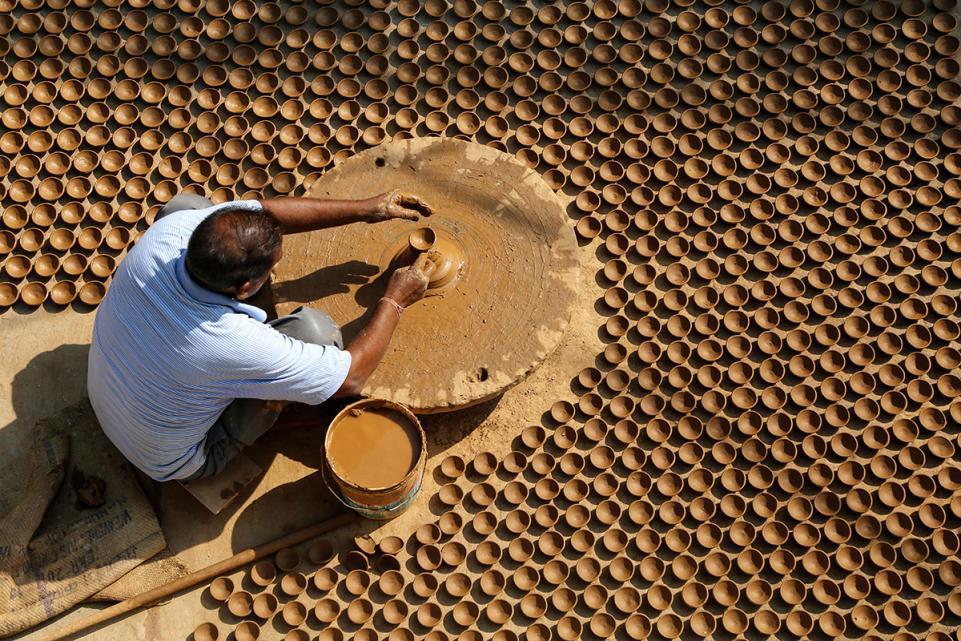 An Indian potter makes diyas (earthen lamps) ahead of the Hindu festival Diwali in Ajmer, in the Indian state of Rajasthan. 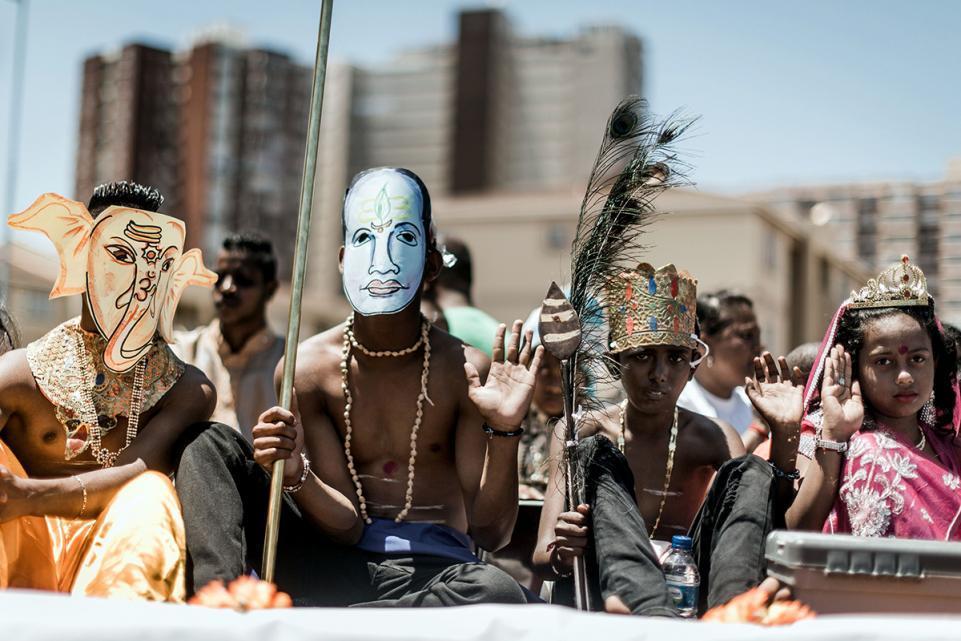 A group of youths dressed as various Hindu gods and goddesses gesture as they sit on a float during a street parade at the old Drive-Inn in Durban. 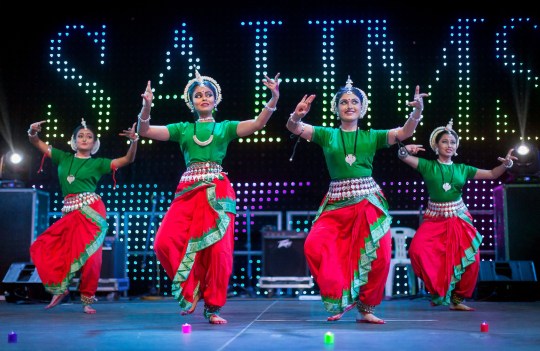 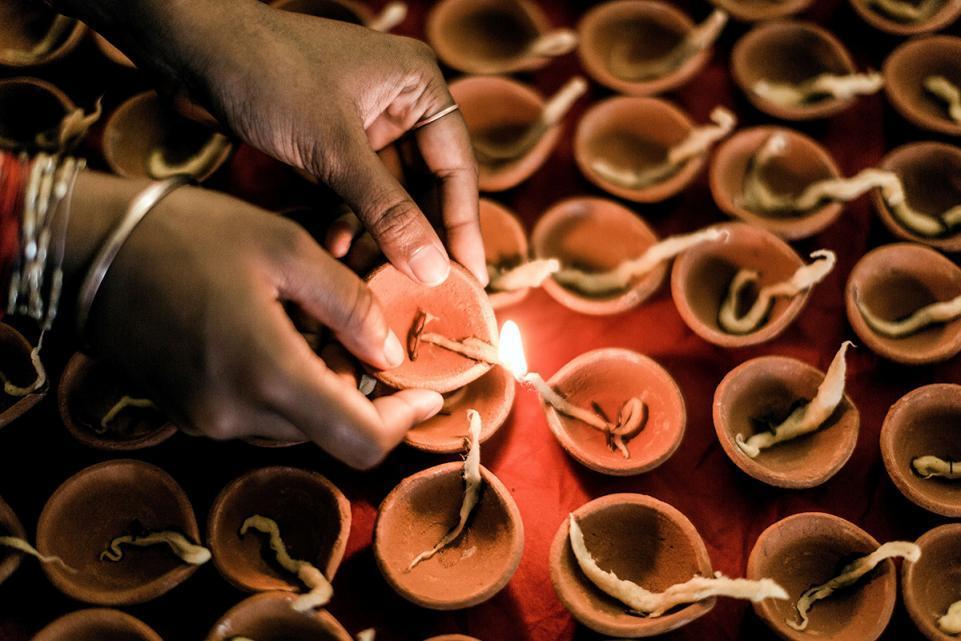 A devotee lights up a clay lamp at a makeshift Hindu temple dedicated to Hindu God Rama, at the old Drive-Inn in Durban. 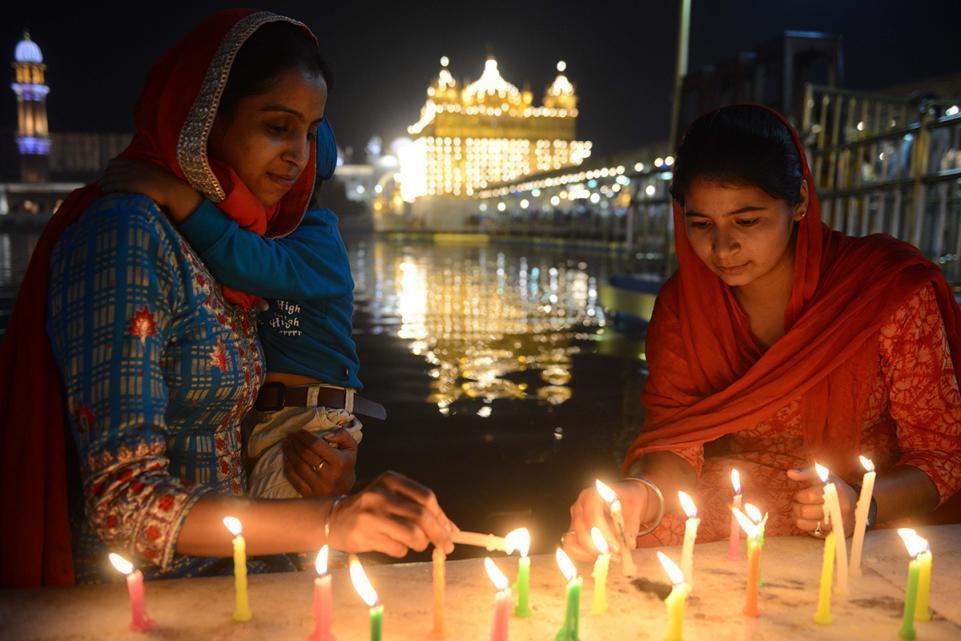 Indian Sikh devotees light candles as they pay their respects as lights glow on the eve of Diwali festival, at the Golden Temple, in Amritsar. 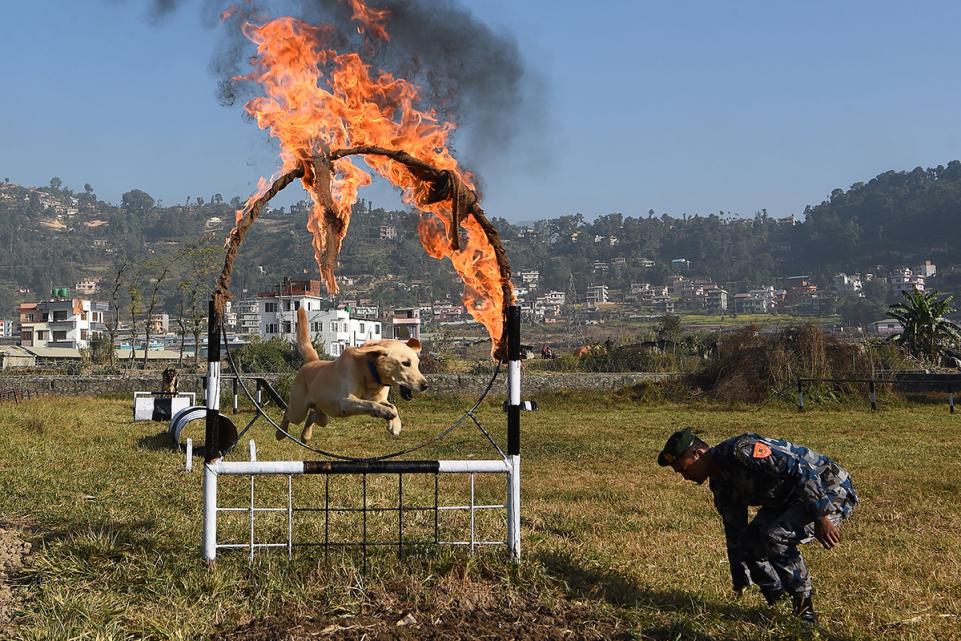 A Nepal Armed Police dog handler and his dog show off their skills at the Armed Police Dog Training School in Kathmandu. 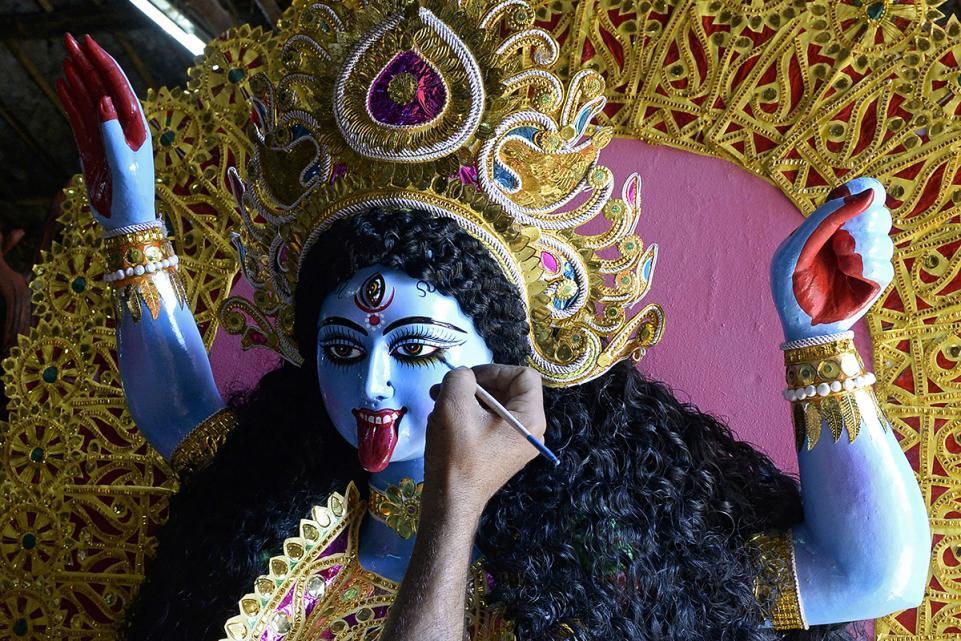 An Indian artist gives final touches to an idol of the Hindu Goddess Kali at a workshop ahead of the Diwali festival in Hyderabad. 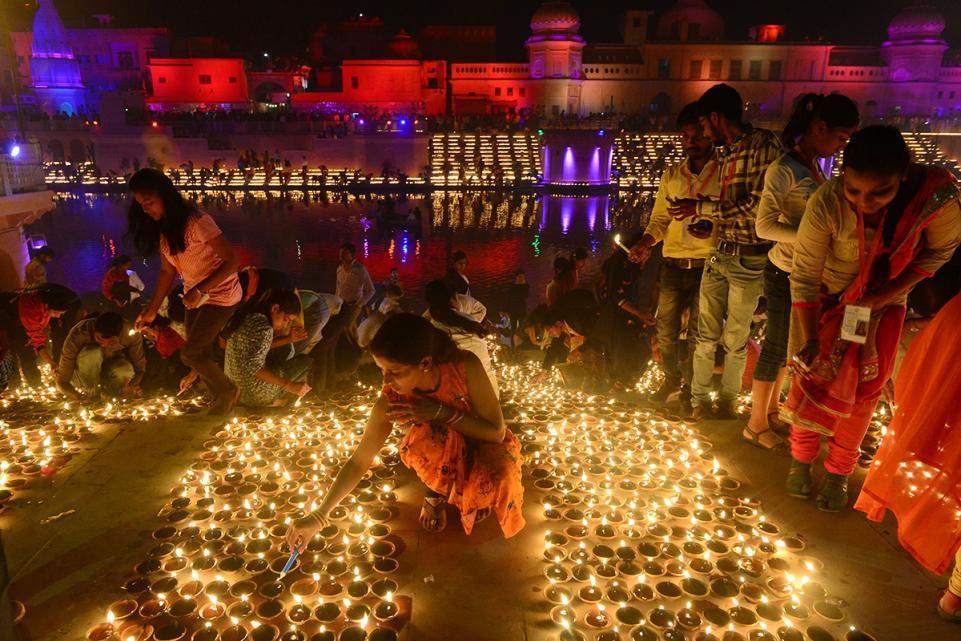 Indian people light earthen lamps on the banks of the River Sarayu in Ayodhya. 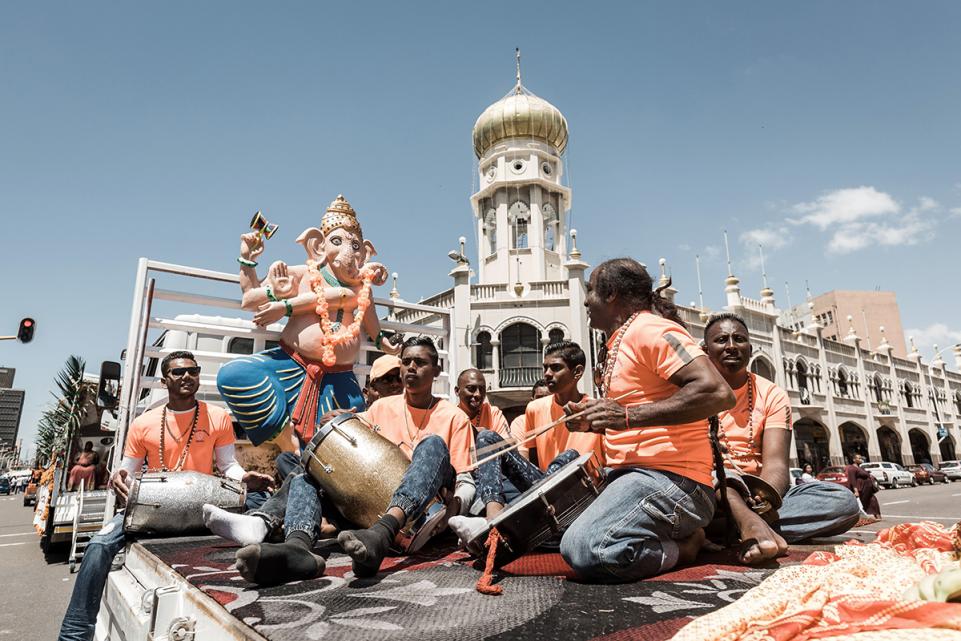 A group of devotees sing and chant the name of the Hindu God Rama, as the float passes in front of the Juma Masjid Mosque, the largest mosque in the Southern hemisphere during a street parade in Durban. 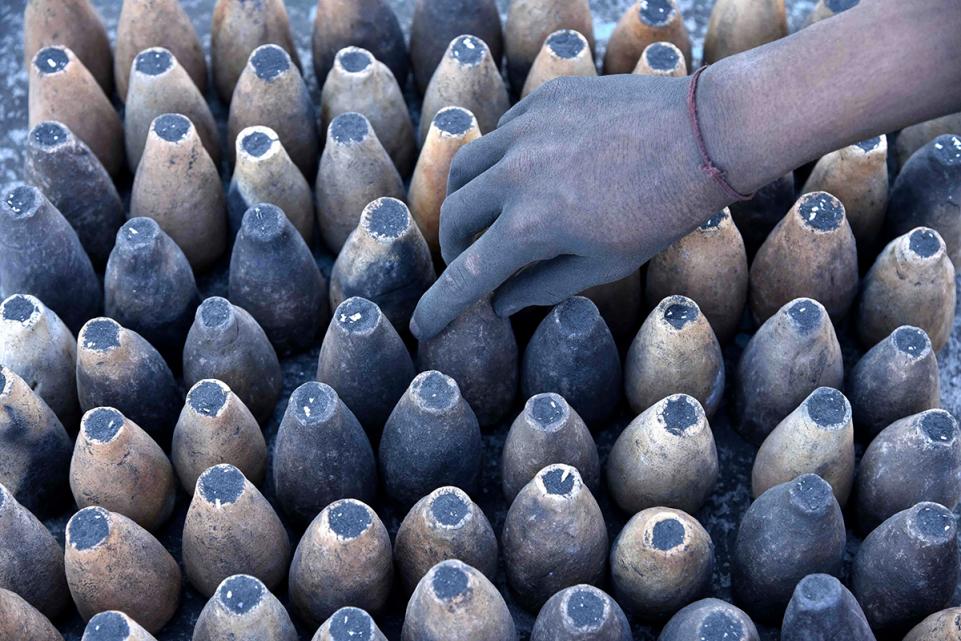 An Indian laborer assembles fireworks made at a factory ahead of the Hindu festival of Diwali in Barpeta, in India's northeast Assam state. Firework use hits a peak across India during the Diwali festival, although the Supreme Court has been trying to restrict sales to tackle mounting pollution. 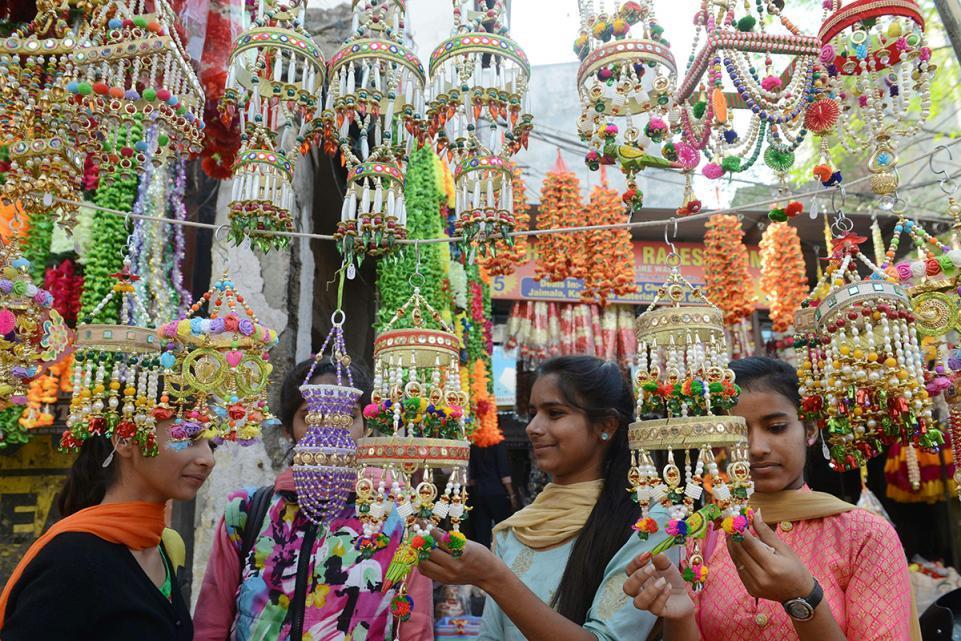 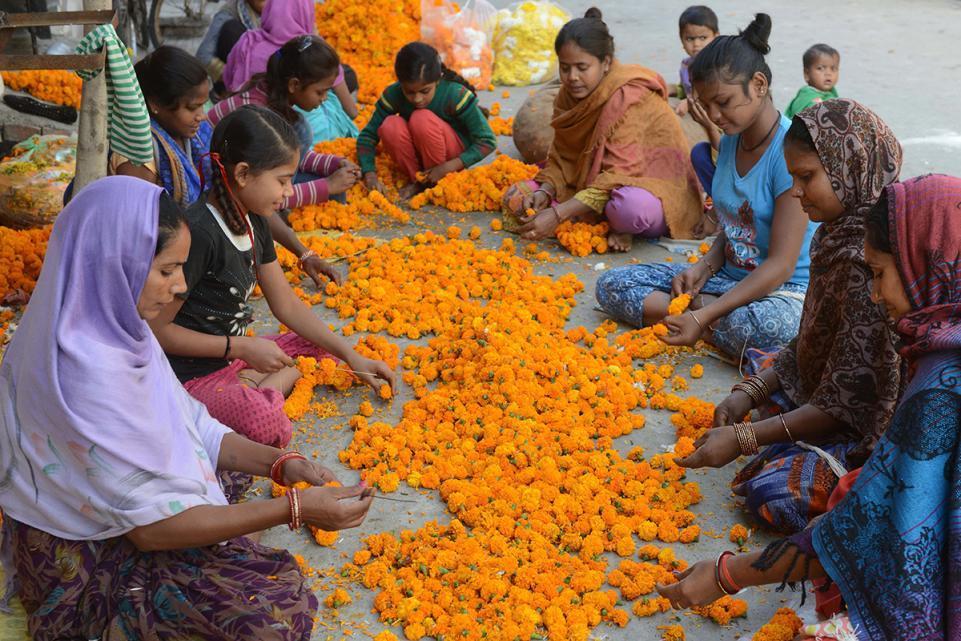 Indian women along with their children prepare marigold garlands in Amritsar. 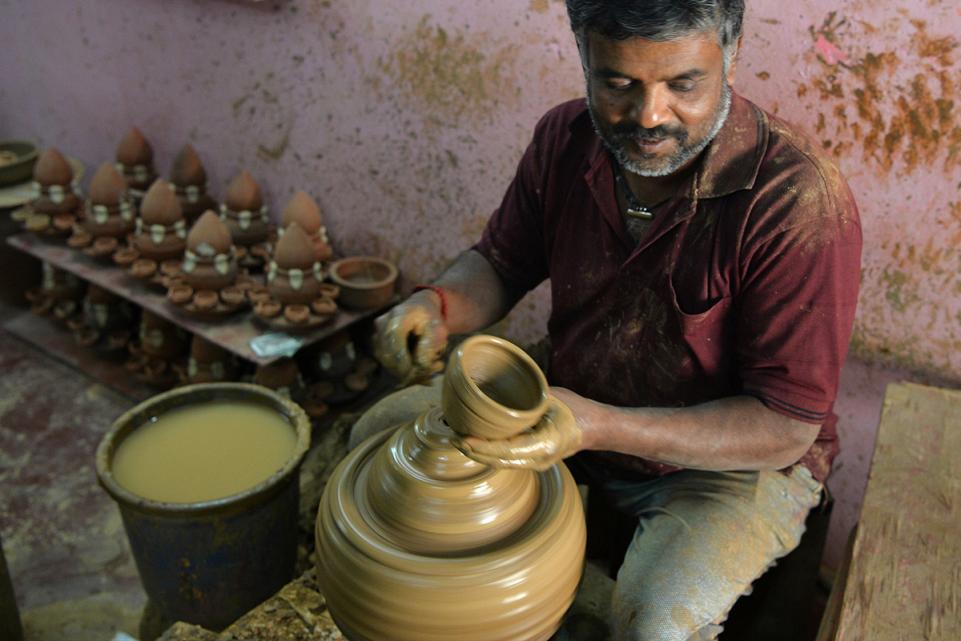 A potter makes "Diyas" or clay lamps at a stall in Bangalore. "Diyas", which are lit and placed around the home, are in heavy demand during the Diwali festival. 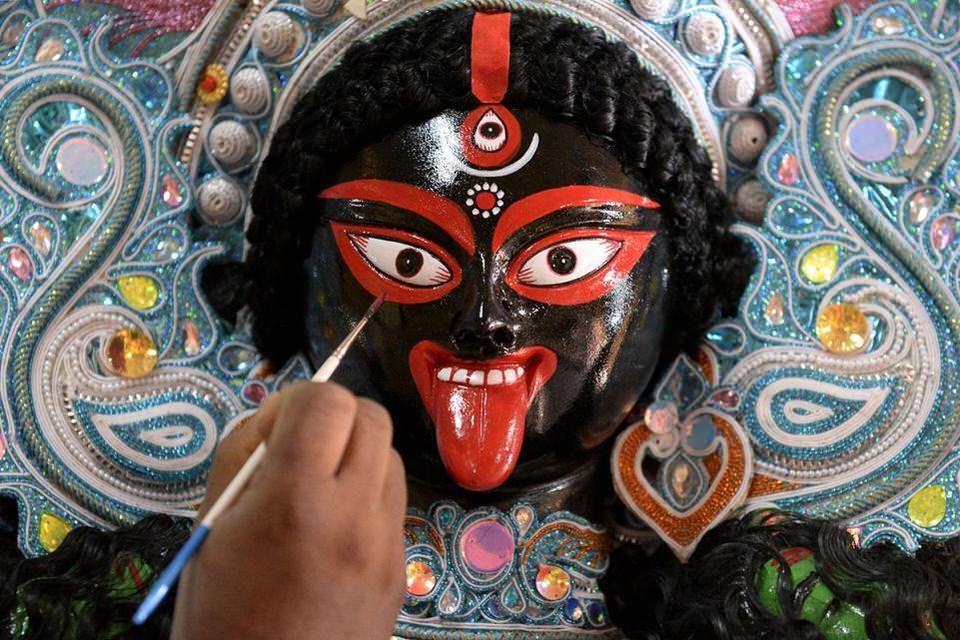 An Indian artist gives final touches to an idol of the Hindu Goddess Kali in Hyderabad. 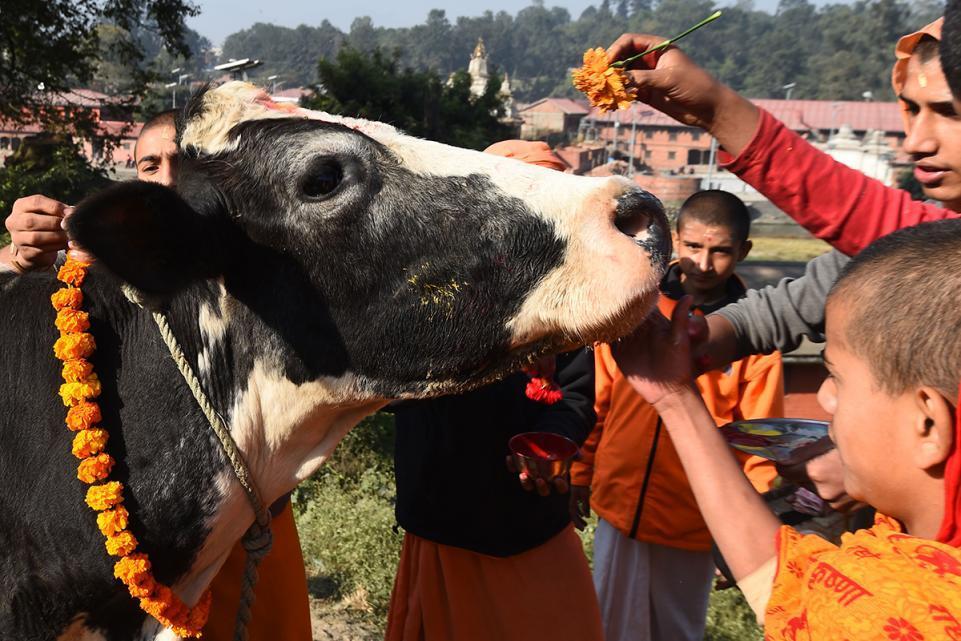 Nepali Hindu devotees worship a cow, regarded as an incarnation of the Hindu deity Laxmi, in Kathmandu. 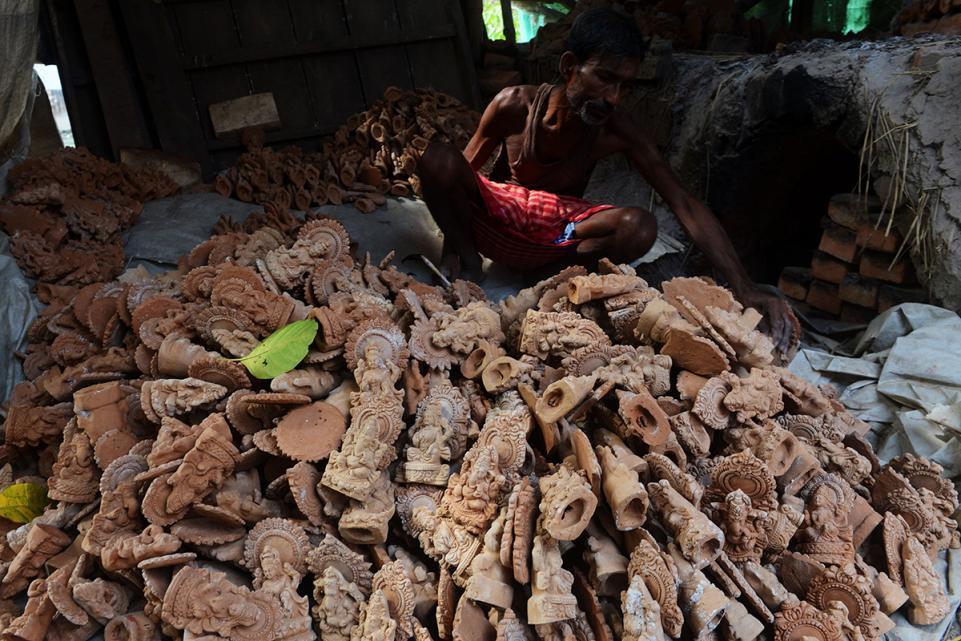 An Indian potter cleans statues of Lord Ganesha and the Goddess Laxmi at his workshop. 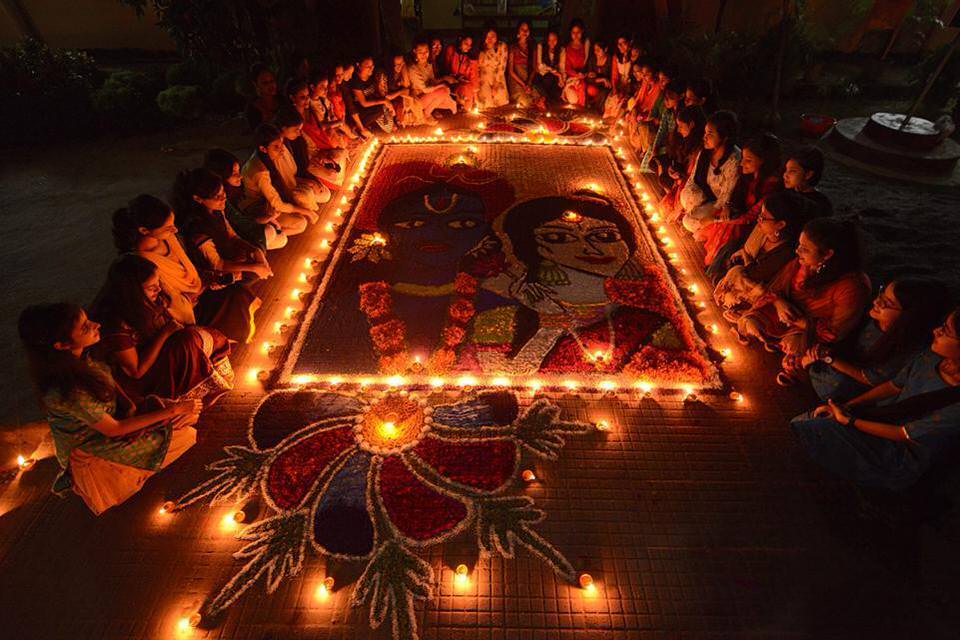 Indian girls light earthen lamps on a "Rangoli" in Guwahati. 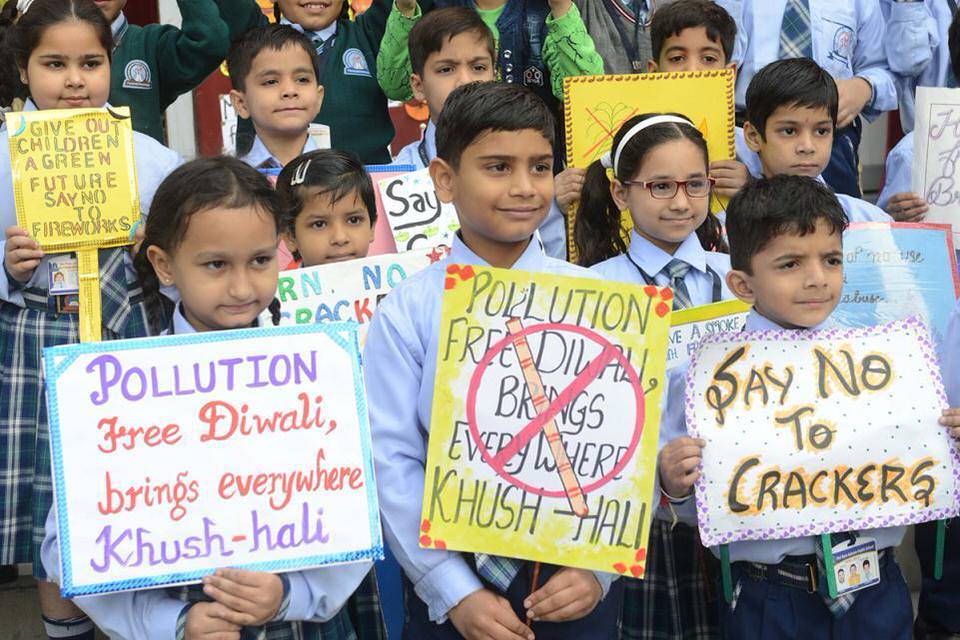 Indian school children hold placards as they stage a demonstration against the use of fireworks and crackers to avoid air pollution during Diwali festival celebration in Amritsar. 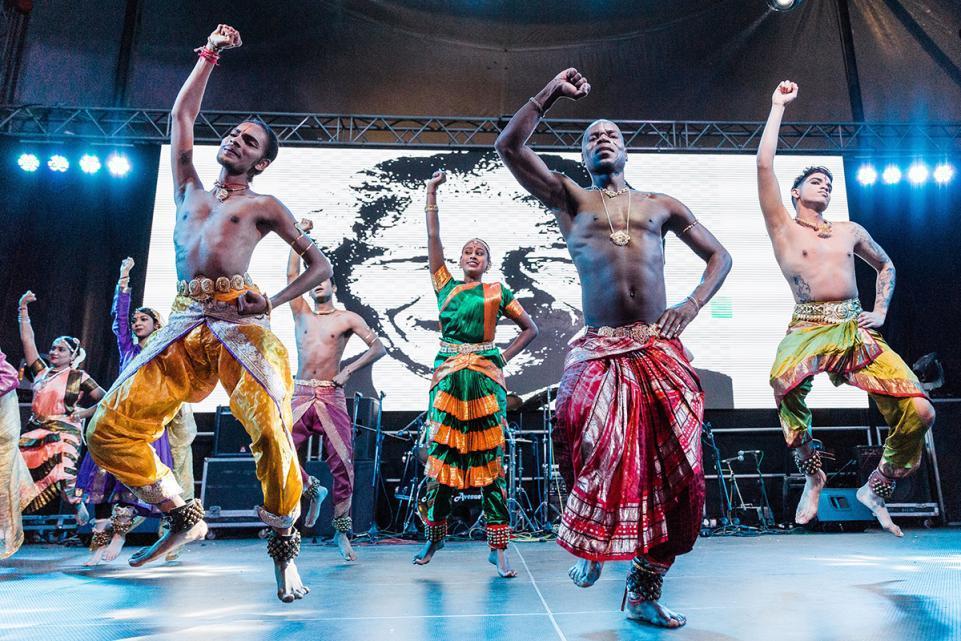