The recent eruptions from several volcanic vents in a residential neighborhood on Hawaii’s Big Island have prompted the evacuation of thousands of residents. The Hawaiian Volcanoes Observatory said eight lava fissures had opened under Leilani Estates over the past few days.

The opening of the fissures and lava flow from Kilauea Volcano follow a series of earthquakes, including a magnitude-6.9 quake on Friday, and the earlier collapse of a nearby crater, emptying the lake of lava within. The unfolding disaster is unpredictable, and may take a very long time to calm down enough to allow residents to return. 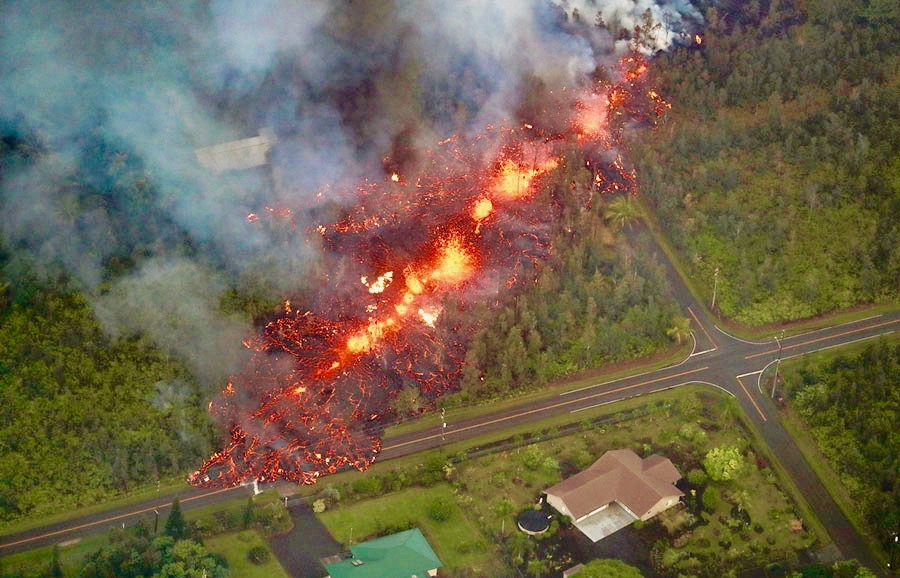 A 2,000-foot-long fissure erupts within the Leilani Estates subdivision, on the east rift zone of the Kilauea volcano threatening homes of hundreds in Hawaii, on May 5, 2018. 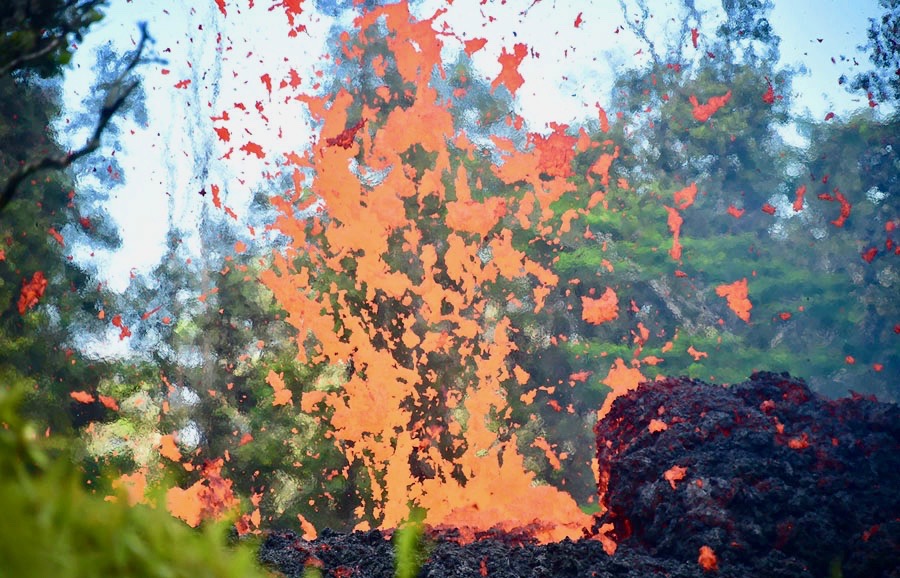 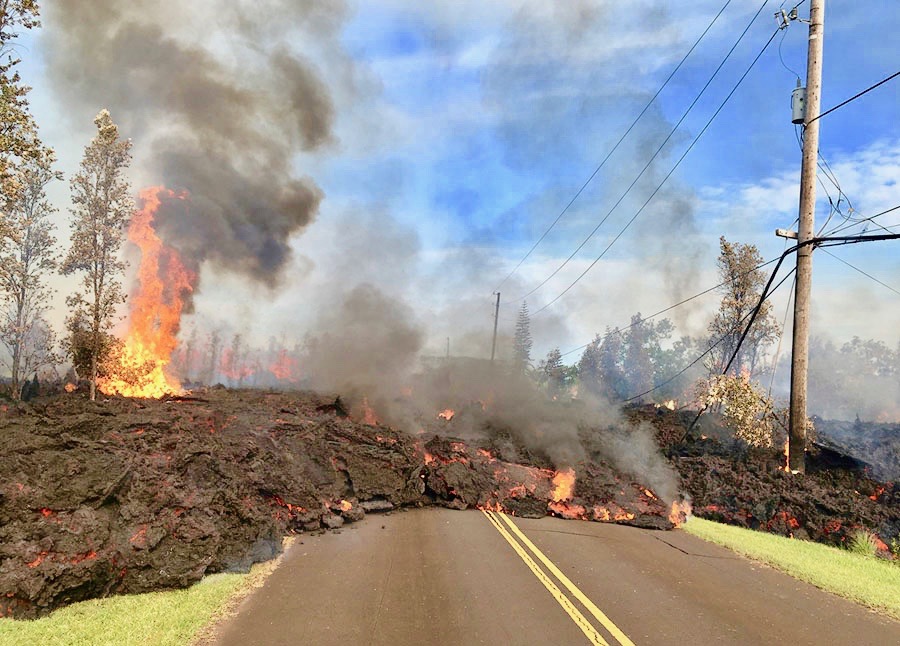 On the morning of May 5, 2018, lava from fissure 7 slowly advanced to the northeast on Hookapu Street in Leilani Estates subdivision on Kilauea's lower East Rift Zone, burning trees and power poles. 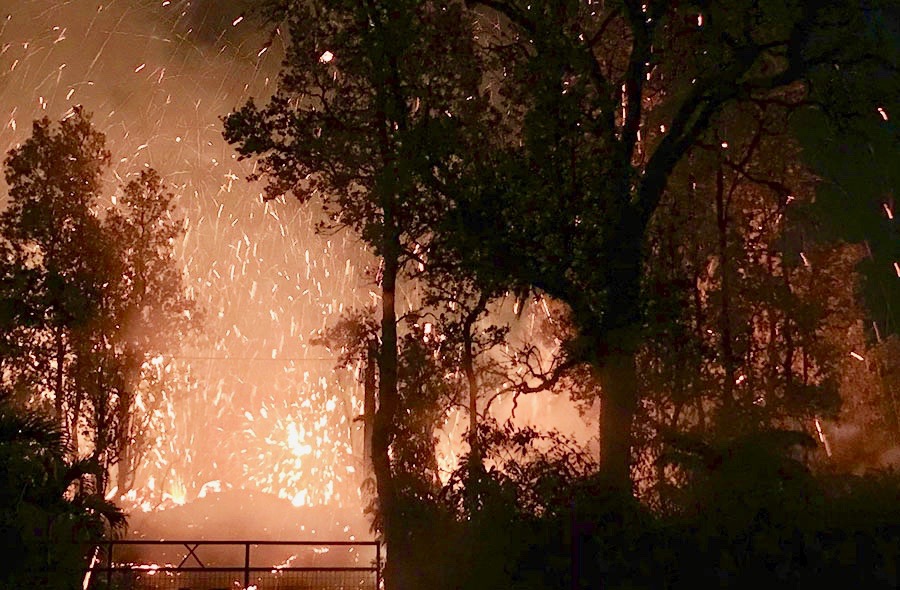 Results of the Eruption from Kilauea at Night 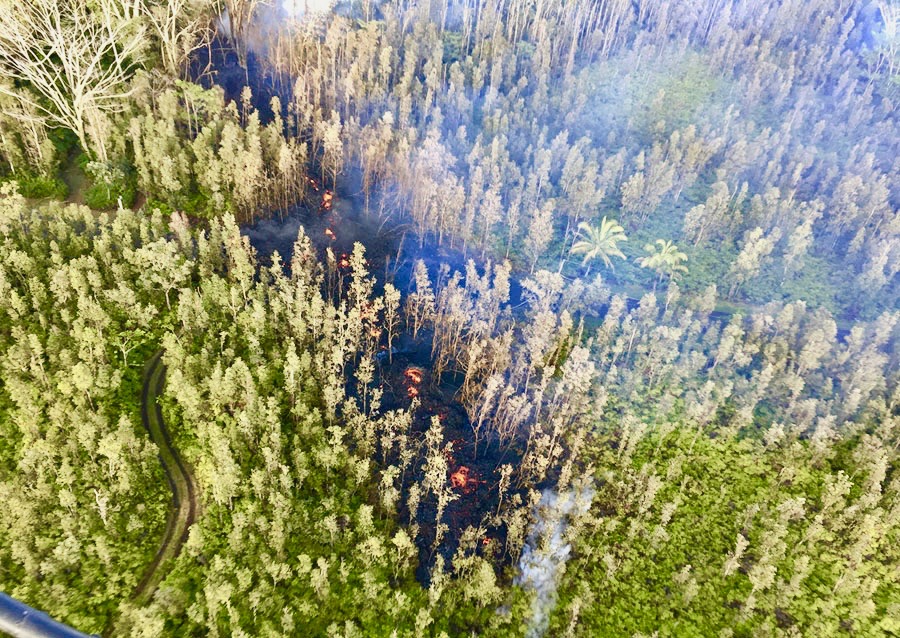 In this photo released by U.S. Geological Survey, lava is shown burning trees and ground cover in the Leilani Estates subdivision near the town of Pahoa on May 3, 2018. 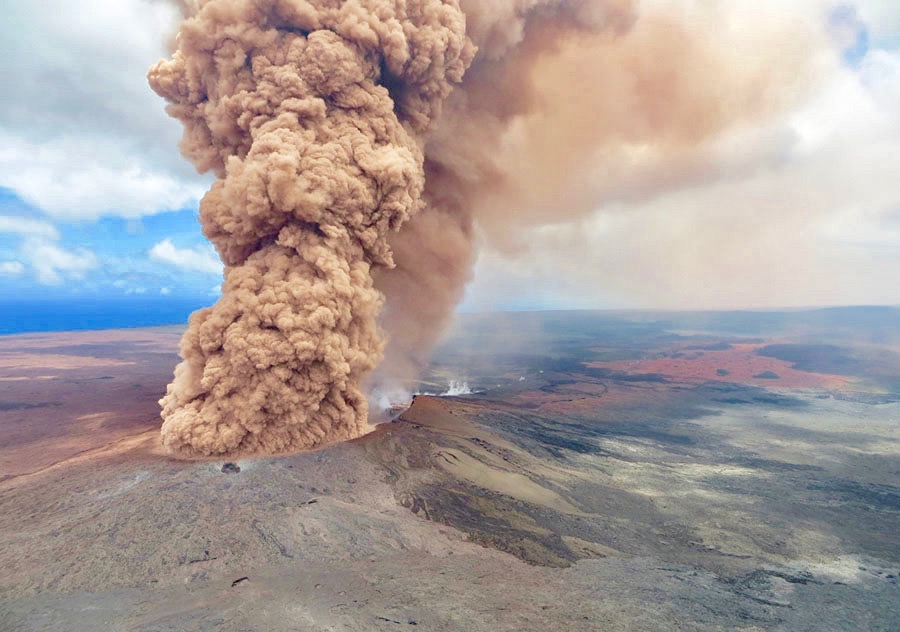 On May 4, 2018, a column of robust, reddish-brown ash plume occurred on the south flank of Kilauea, after a magnitude 6.9 earthquake shook the Big Island of Hawaii. 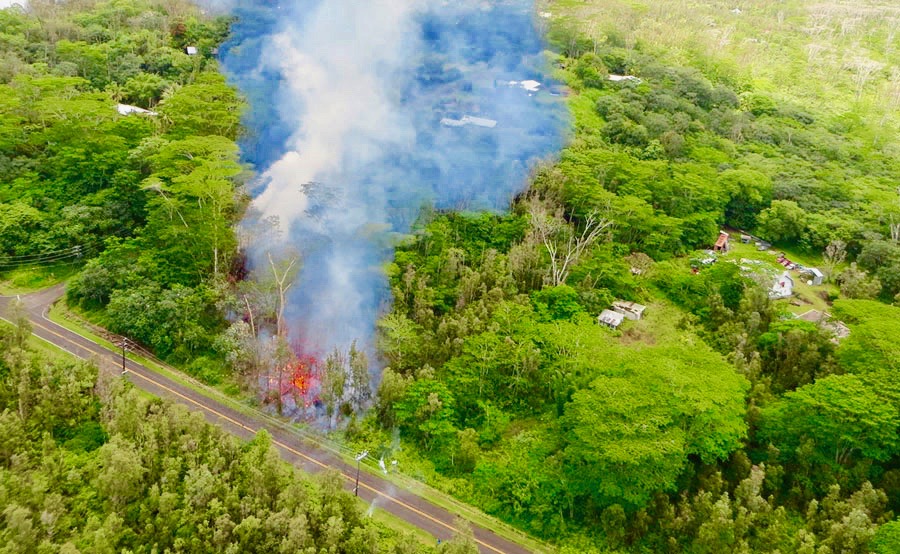 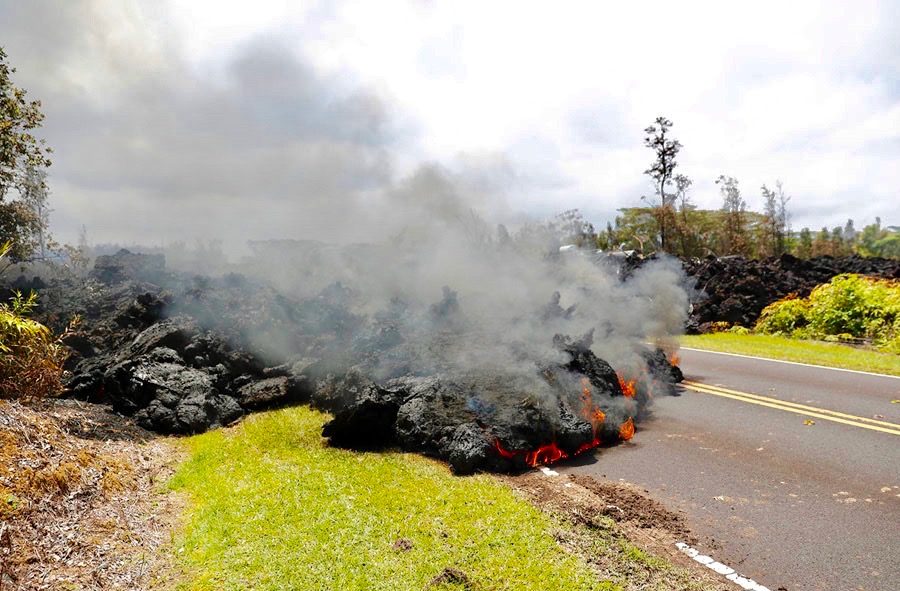 Lava Creeps Across the Road in the Leilani Estates Subdivision Near Pahoa, Hawaii 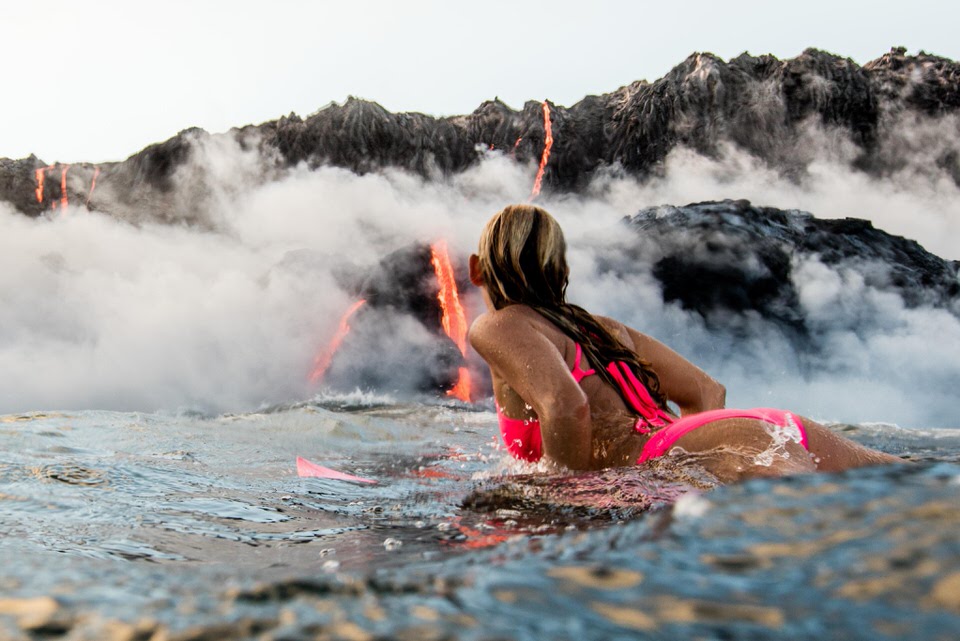 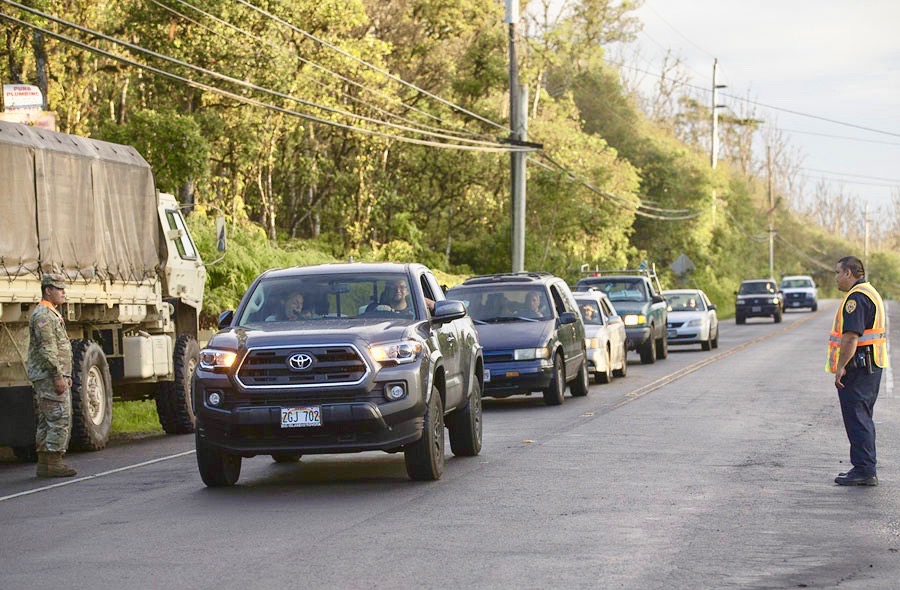 After a mandatory evacuation, Leilani Estates residents line up on the road leading to the area, on May 4, 2018. Due to unsafe conditions in the area, authorities were not allowing residents back to their homes. 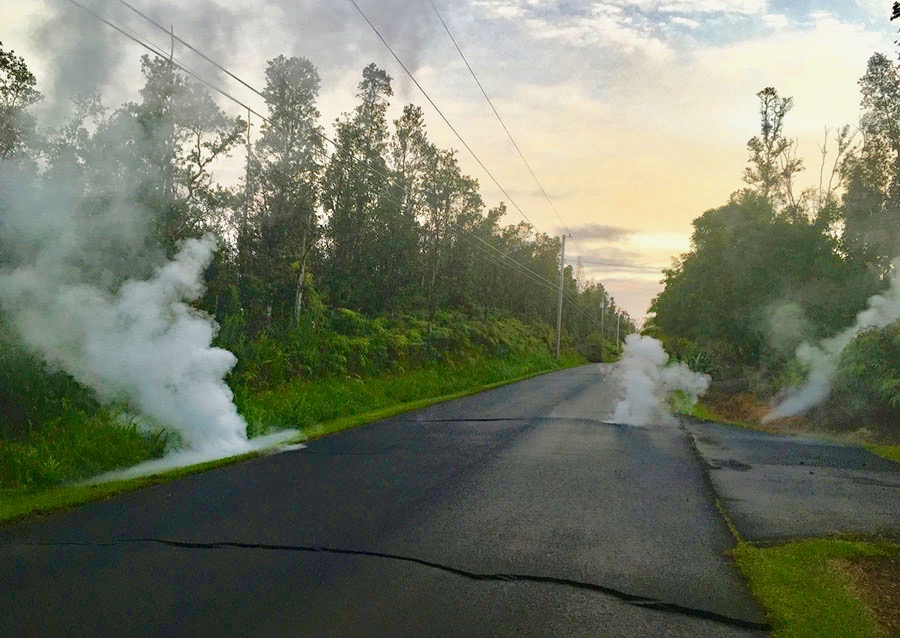 Steaming cracks appear on May 4, 2018, in Leilani Estates, moments before a fissure opened up on Kaupili Street. 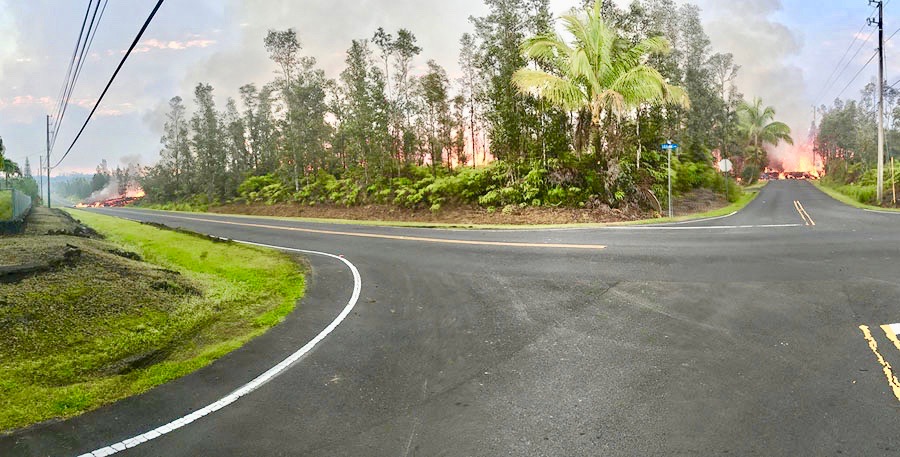 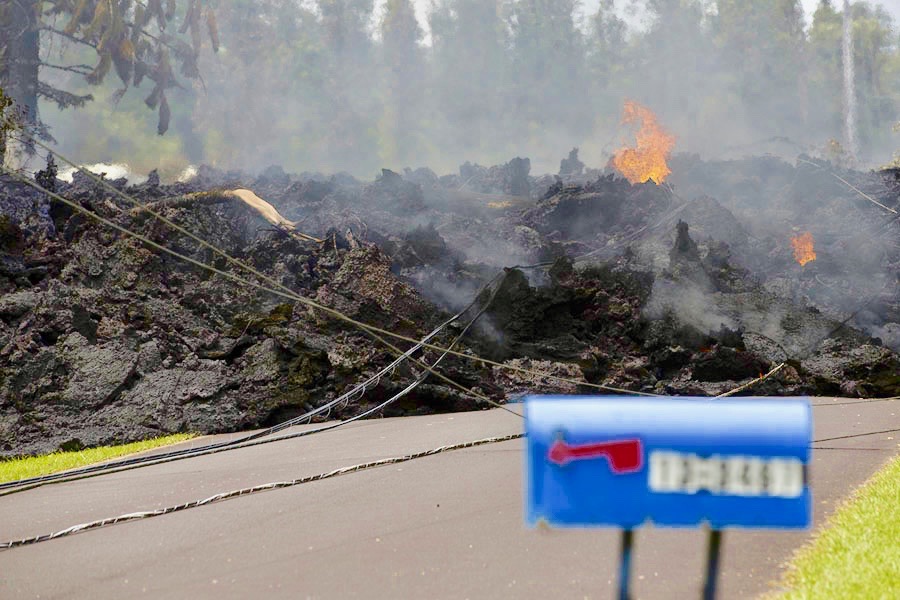 A Mailbox Stands Near the Lava Flow in Leilani Estates 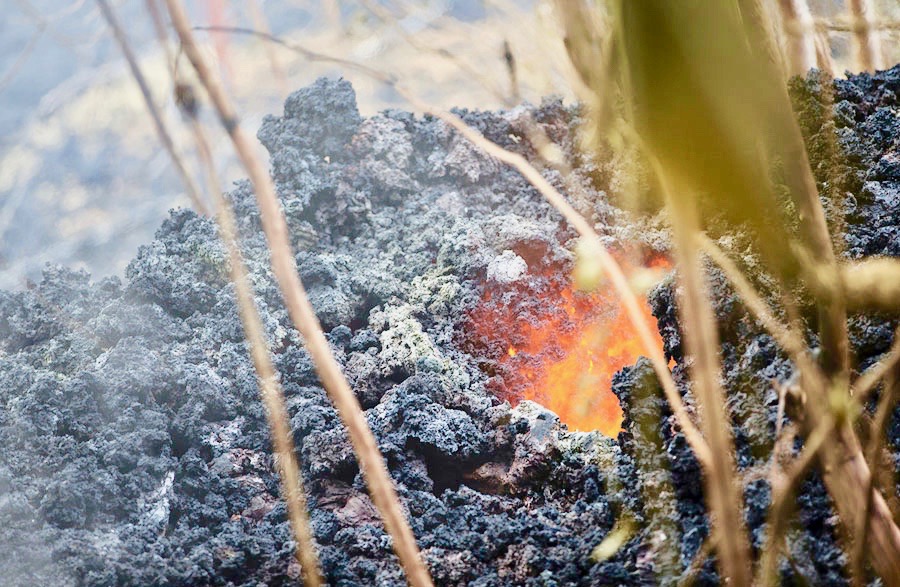 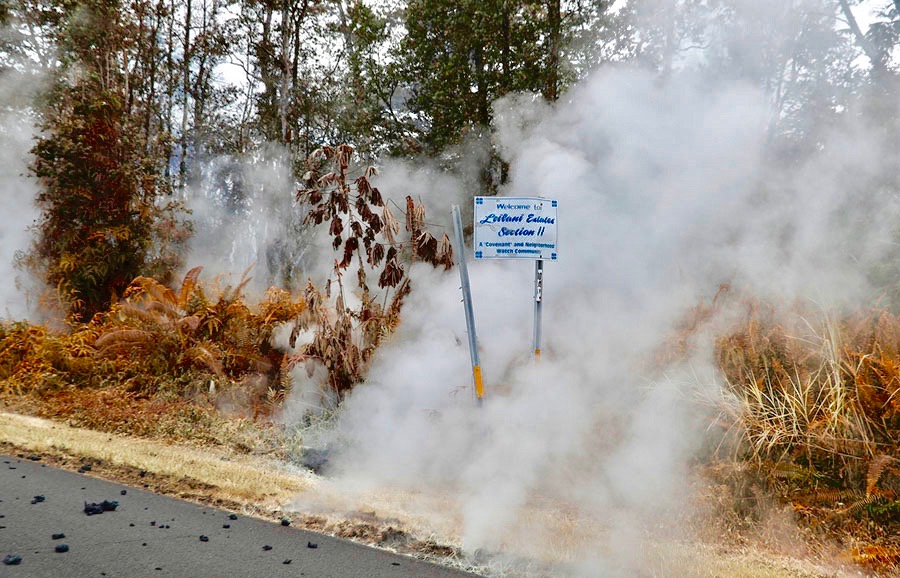 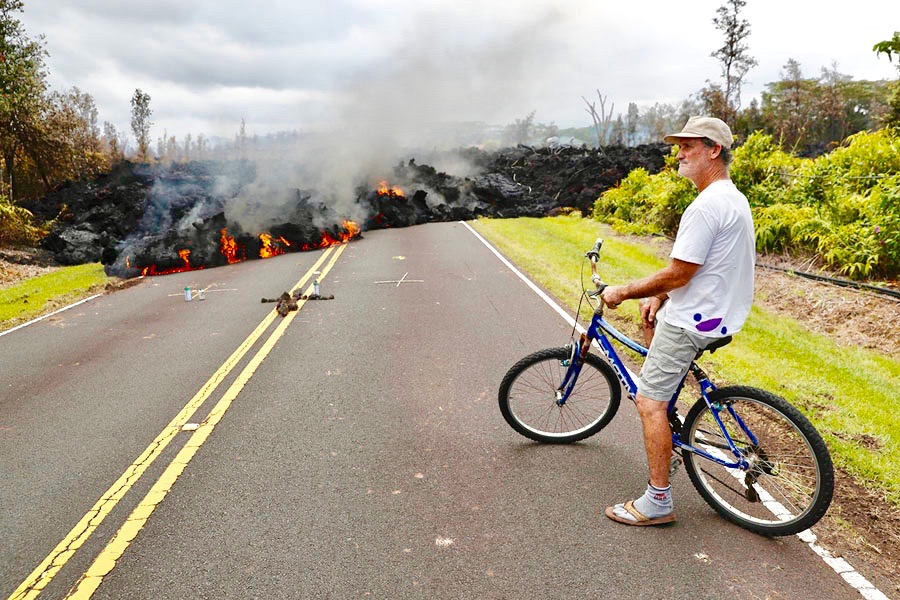 Leilani Estates resident Sam Knox watches the lava stretch across the road on May 5, 2018. Knox's home is less than a few hundred yards from the lava flow and he does not have any plans to evacuate. He said he was hopeful the lava will not take his home. 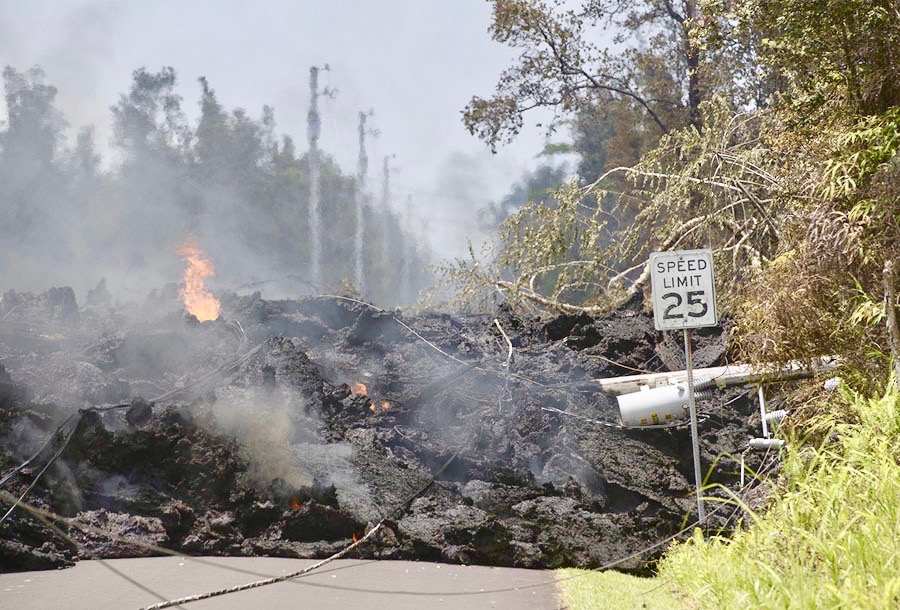 Power Lines are Pulled Down by Lava in Leilani Estates 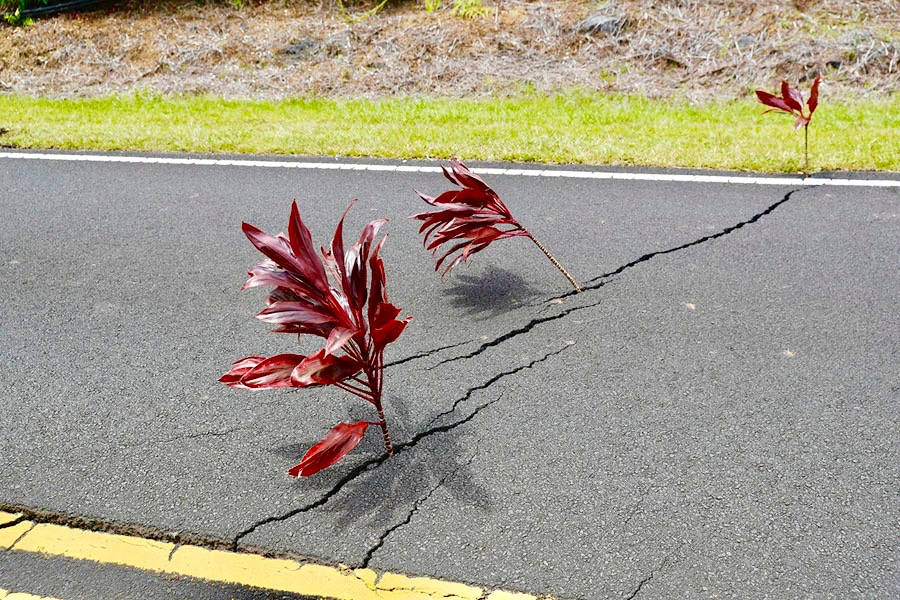 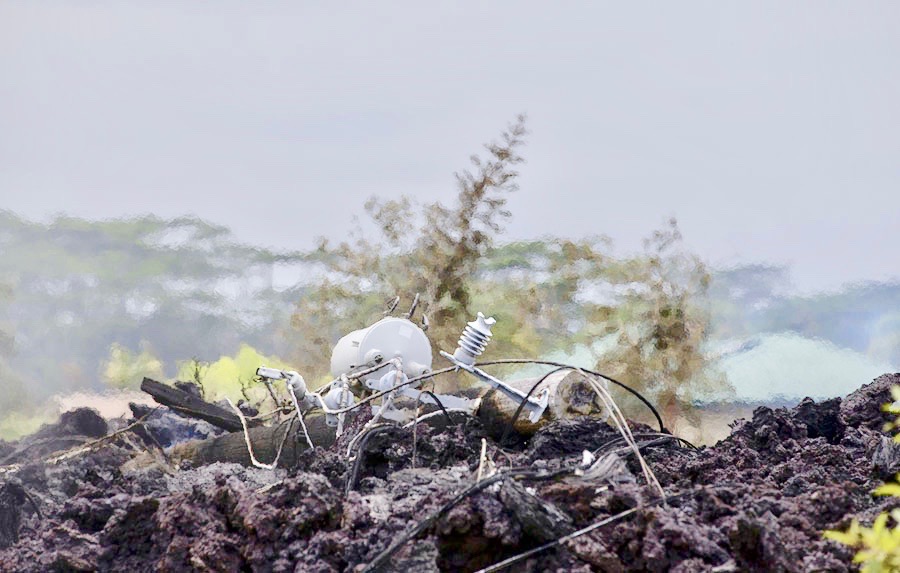 A Power Line and Transformer Lay on Top of a Lava Flow Near Pahoa, Hawaii 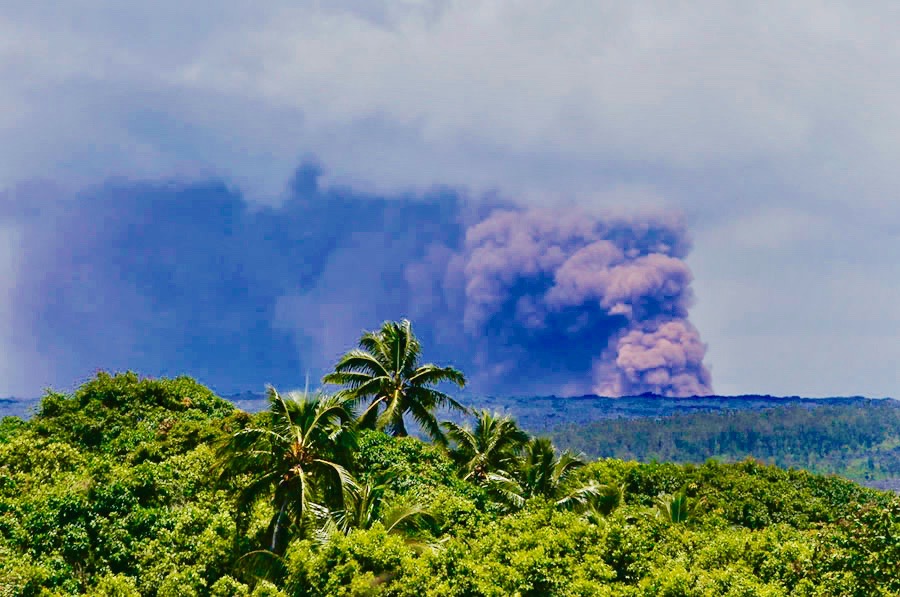 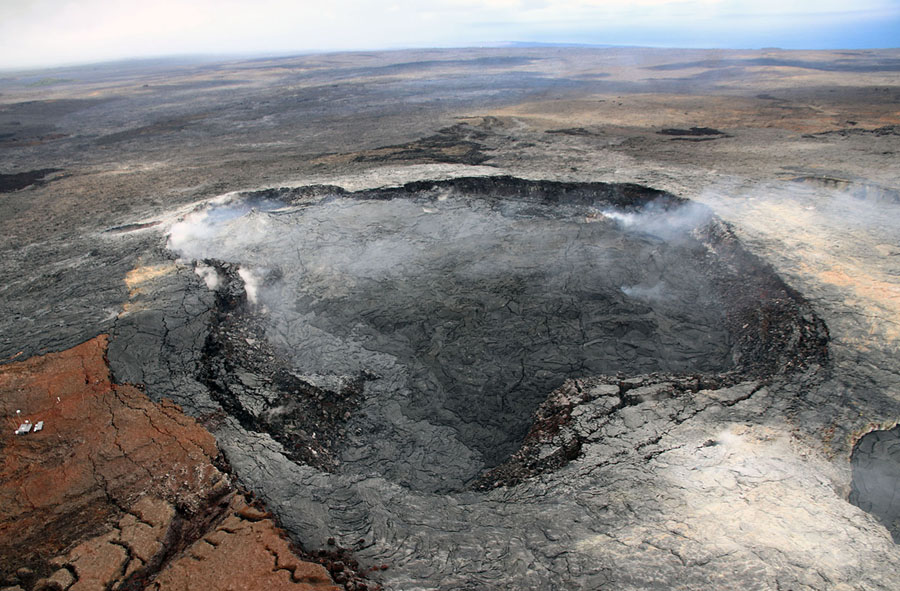 How Kilauea's 800-foot-wide Pu'u O'o crater appeared less than two weeks ago—completely full of lava, on April 23, 2018. For the previous month and a half, the crater floor of Pu'u O'o experienced ongoing uplift, which generated cracks on the crater floor. 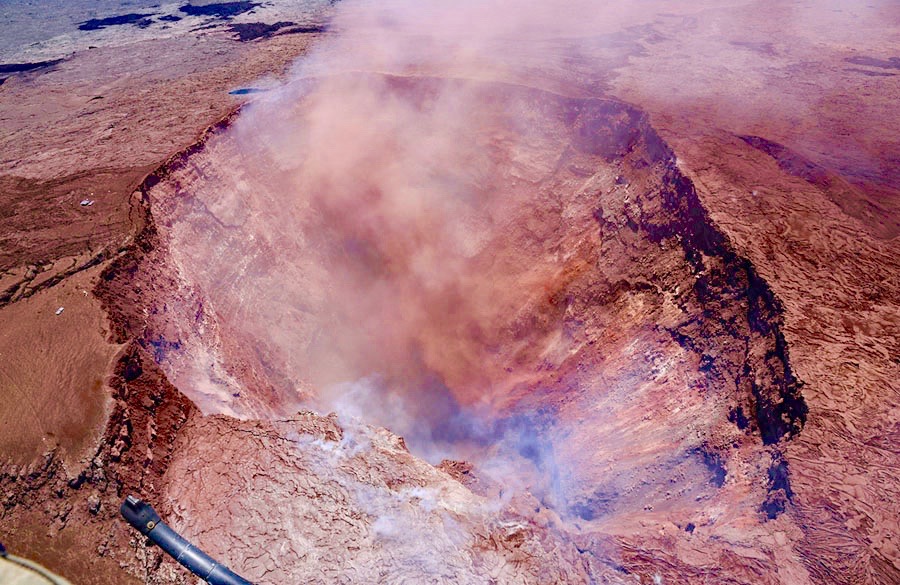 How Kilauea's Pu'u O'o crater appeared on May 3, 2018—completely drained of lava. In this photo released by U.S. Geological Survey, a plume of ash rises from the Pu'u O'o vent on Hawaii's Kilauea Volcano. 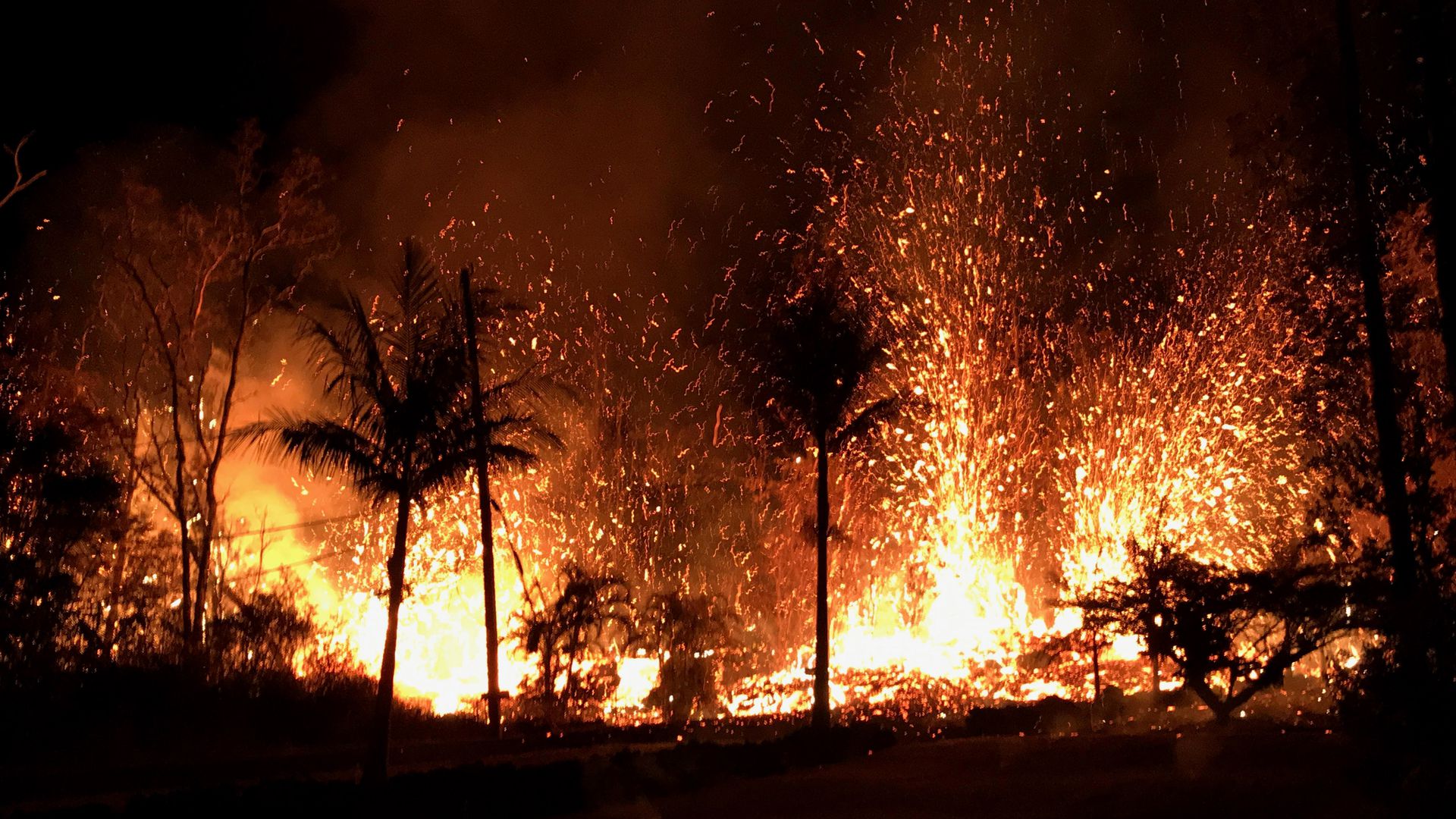 Lava Shoots Over 230 Feet in the Air 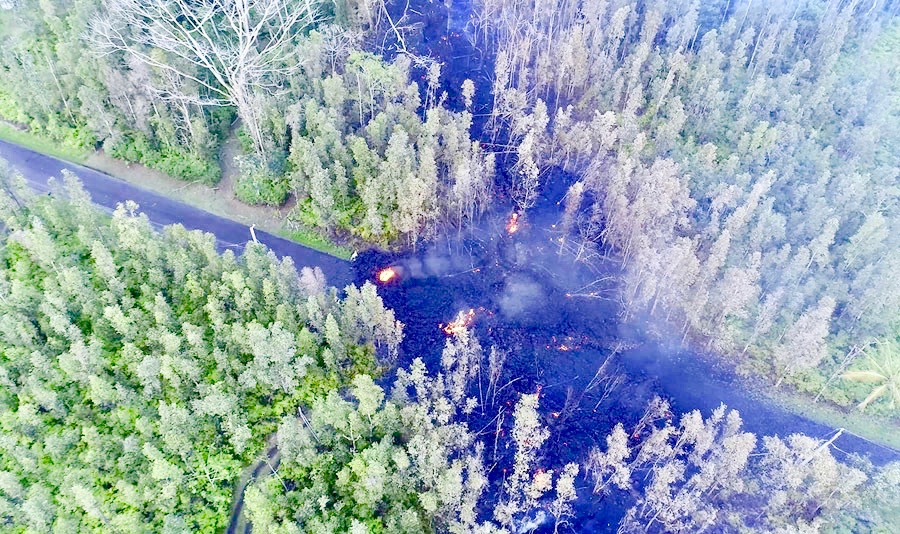 In this still frame taken from video, lava flows over a road in the Puna District as a result of the eruption from Kilauea Volcano on May 4, 2018. 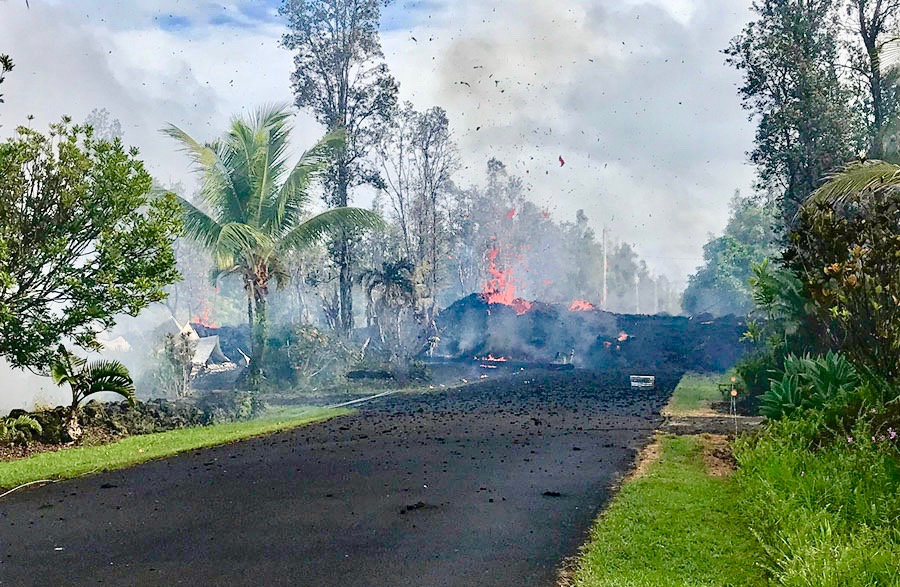 Fissure 3 at Leilani and Kaupili Streets in Leilani Estates on May 4, 2018. Lava on the road was approximately 2 meters thick. 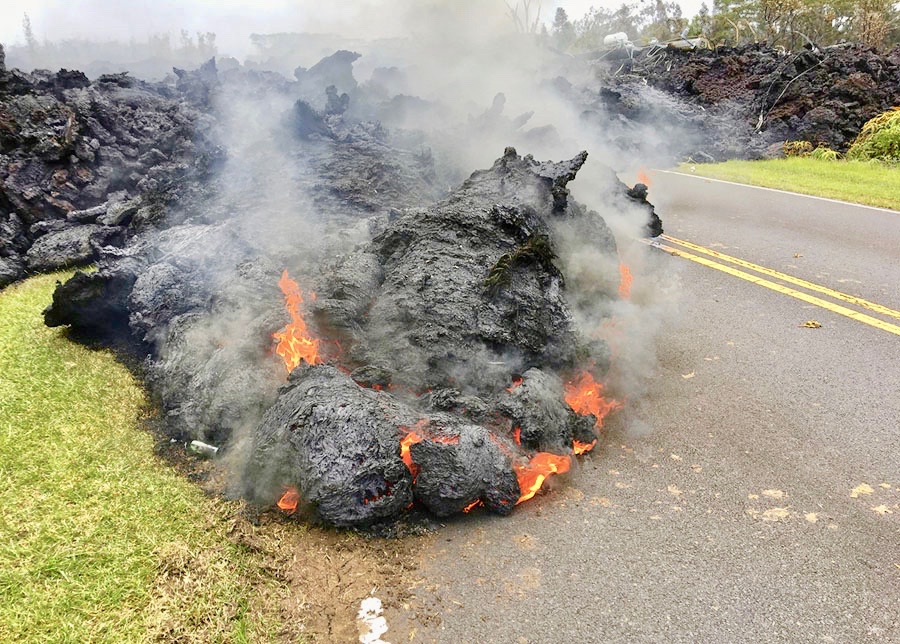 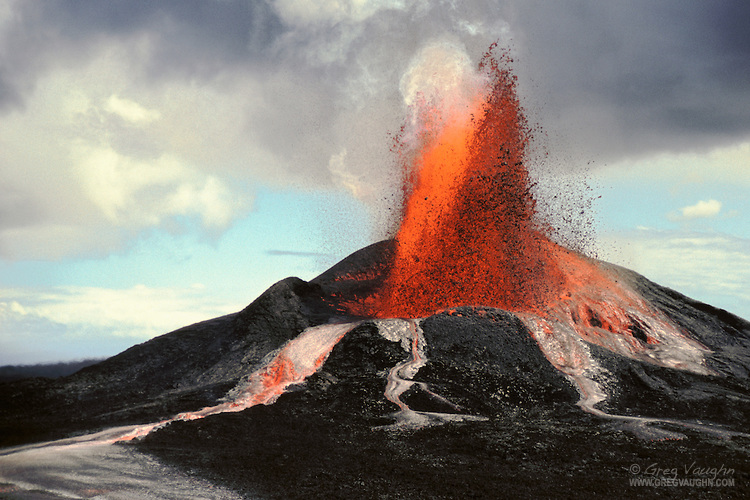 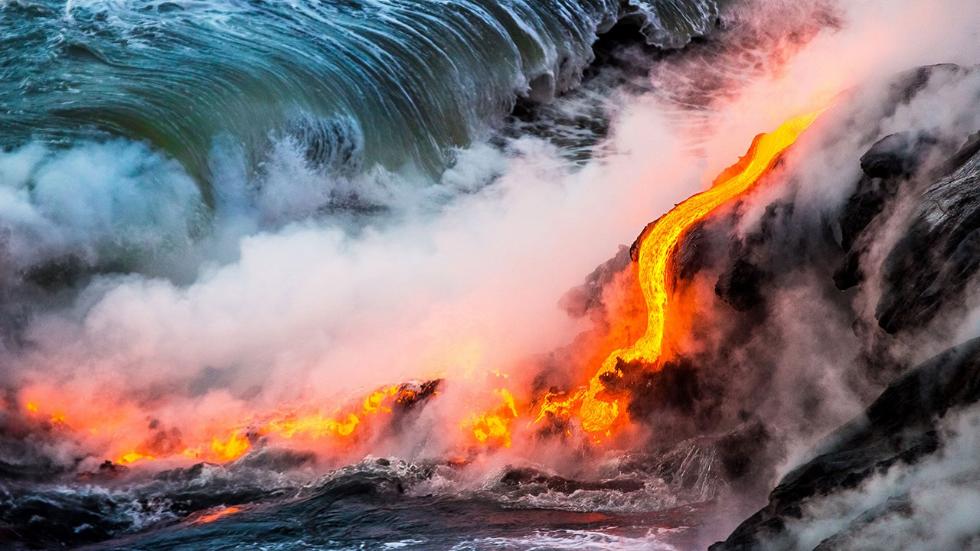