The National Memorial for Peace and Justice, located in Montgomery, Alabama is the nation’s first memorial dedicated to the legacy of enslaved black people, people terrorized by lynching, African Americans humiliated by racial segregation and Jim Crow, and people of color burdened with contemporary presumptions of guilt and police violence.

Work on the memorial began in 2010 when the Organization for Equal Justice Initiative (EJI) staff began investigating thousands of racial terror lynchings in the American South, many of which had never been documented. EJI was interested not only in lynching incidents, but in understanding the terror and trauma this sanctioned violence against the black community created. Six million black people fled the South as refugees and exiles as a result of these "racial terror lynchings."

This research ultimately produced "Lynching in America: Confronting the Legacy of Racial Terror" in 2015 which documented thousands of racial terror lynchings in twelve states. Since the report’s release, EJI has supplemented its original research by documenting racial terror lynchings in states outside the Deep South. EJI staff have also embarked on a project to memorialize this history by visiting hundreds of lynching sites, collecting soil, and erecting public markers, in an effort to reshape the cultural landscape with monuments and memorials that more truthfully and accurately reflect our history. 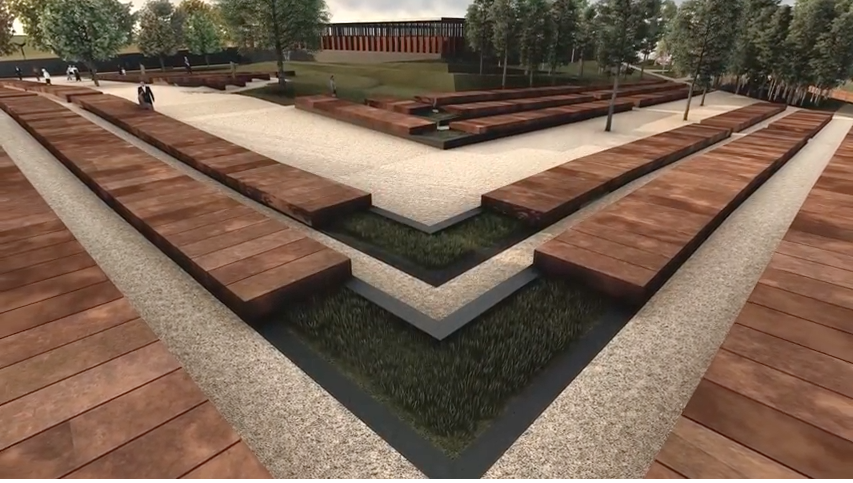 The Memorial for Peace and Justice was conceived with the hope of creating a sober, meaningful site where people can gather and reflect on America’s history of racial inequality. EJI partnered with artists like Kwame Akoto-Bamfo whose sculpture on slavery confronts visitors when they first enter the memorial. EJI then leads visitors on a journey from slavery, through lynching and racial terror, with text, narrative, and monuments to the lynching victims in America. 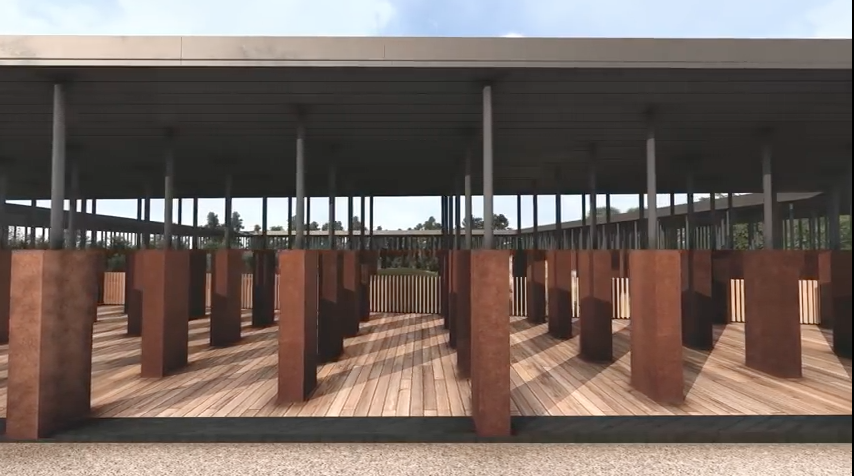 In the center of the site, visitors will encounter a memorial square, created with assistance from the Mass Design Group. The memorial experience continues through the civil rights era made visible with a sculpture by Dana King dedicated to the women who sustained the Montgomery Bus Boycott. Finally, the memorial journey ends with contemporary issues of police violence and racially biased criminal justice expressed in a final work created by Hank Willis Thomas. The memorial displays writing from Toni Morrison, words from Dr. Martin Luther King Jr., and a reflection space in honor of Ida B. Wells. 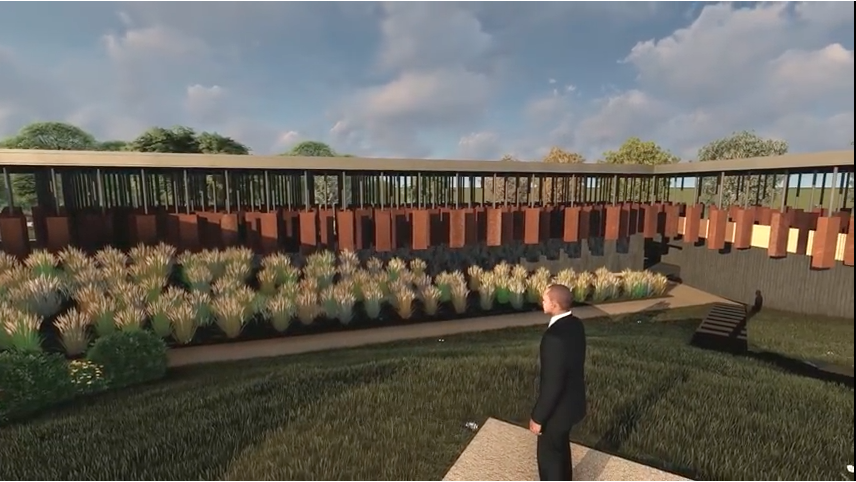 Set on a six-acre site, the memorial uses sculpture, art, and design to contextualize racial terror. The site includes a memorial square with 800 six-foot monuments to symbolize thousands of racial terror lynching victims in the United States and the counties and states where this terrorism took place. 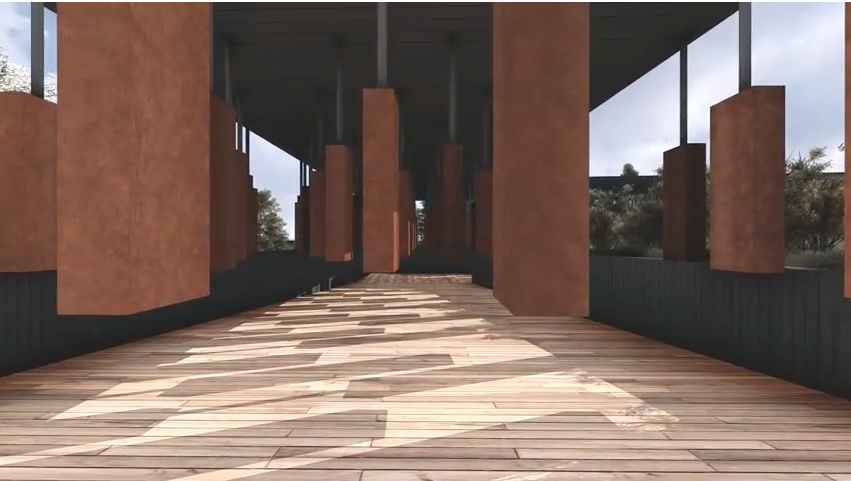 The memorial structure on the center of the site is constructed of over 800 corten steel monuments, one for each county in the United States where a racial terror lynching took place. The names of the lynching victims are engraved on the columns. The memorial is more than a static monument. In the six-acre park surrounding the memorial is a field of identical monuments, waiting to be claimed and installed in the counties they represent. Over time, the national memorial will serve as a report on which parts of the country have confronted the truth of this terror and which have not. 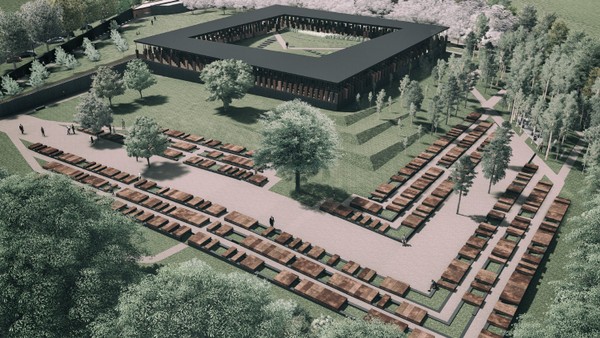 In the report, Lynching in America: Confronting the Legacy of Racial Terror , EJI documented more than 4400 lynchings of black people in the United States between 1877 and 1950. 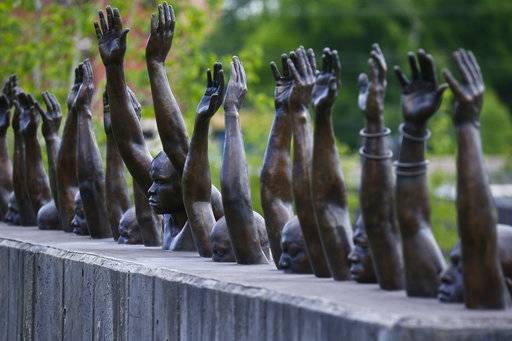 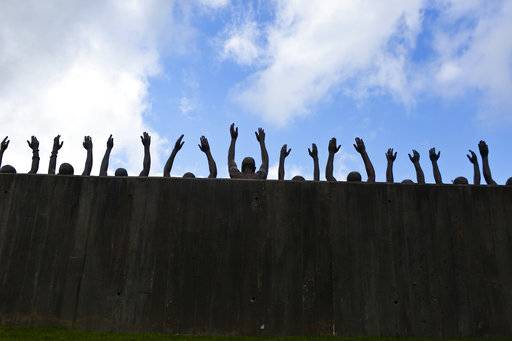 The photos above show a bronze statue called "Raise Up" as part of the display at the National Memorial for Peace and Justice, the new memorial to honor thousands of people killed in racist lynchings. 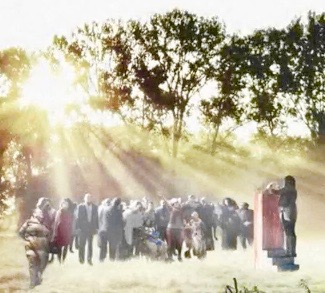 EJI identified 800 more lynchings than had previously been recognized. Racial terror lynchings were violent and public acts of torture that traumatized black people throughout the country and were largely tolerated by state and federal officials. Lynchings in the American South were not isolated hate crimes committed by rogue vigilantes. Lynching was targeted racial violence at the core of a systematic campaign of terror perpetuated in furtherance of an unjust social order. These lynchings were terrorism.

The lynching era left thousands dead; it significantly marginalized black people in the country's political, economic, and social systems; and it fueled a massive migration of black refugees out of the South. In addition, lynching - and other forms of racial terrorism - inflicted deep traumatic and psychological wounds on survivors, witnesses, family members, and the entire African American community.

Why Build a Memorial to Victims of Racial Terror? EJI believes that publicly confronting the truth about our history is the first step towards recovery and reconciliation. A history of racial injustice must be acknowledged, and mass atrocities and abuse must be recognized and remembered, before a society can recover from mass violence. Public commemoration plays a significant role in prompting community-wide reconciliation. The National Memorial for Peace and Justice provides a sacred space for truth-telling and reflection about racial terrorism and its legacy. 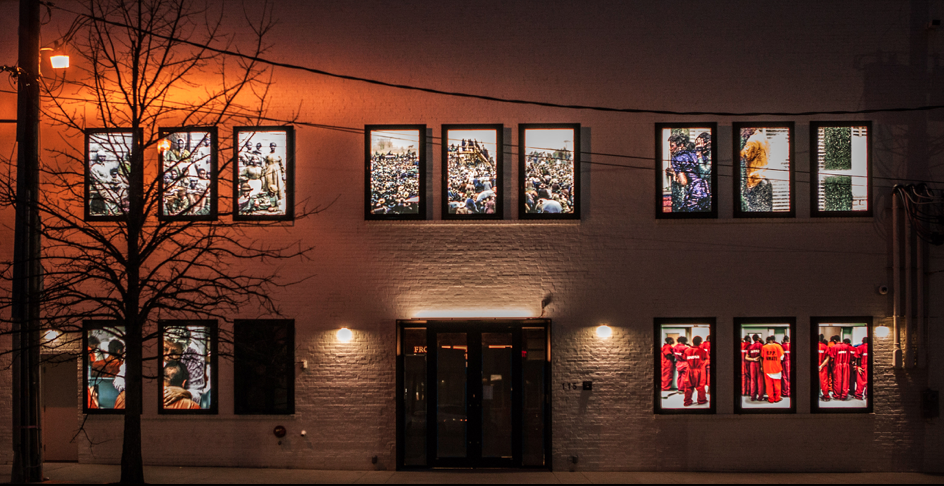 EJI's Community Remembrance Project is part of our campaign to recognize the victims of lynching by collecting soil from lynching sites, erecting historical markers, and creating a memorial that acknowledges the horrors of racial injustice.

Lynching profoundly impacted race relations in this country and shaped the geographic, political, social, and economic conditions of African Americans in ways that are still evident today. Terror lynchings fueled the mass migration of millions of black people from the South into urban ghettos in the North and West in the first half of the 20th century. Lynching created a fearful environment in which racial subordination and segregation were maintained with limited resistance for decades. Most critically, lynching reinforced a legacy of racial inequality that has never been adequately addressed in America.

Public acknowledgment of mass violence is essential not only for victims and survivors, but also for perpetrators and bystanders who suffer from trauma and damage related to their participation in systematic violence and dehumanization. Many of the communities where lynchings took place have gone to great lengths to erect markers and monuments that memorialize the Civil War, the Confederacy, and historical events during which local power was violently reclaimed by white Southerners. But there are very few monuments or memorials that address the history and legacy of lynching in particular or the struggle for racial equality more generally, and most of the victims of lynching have never been publicly acknowledged. 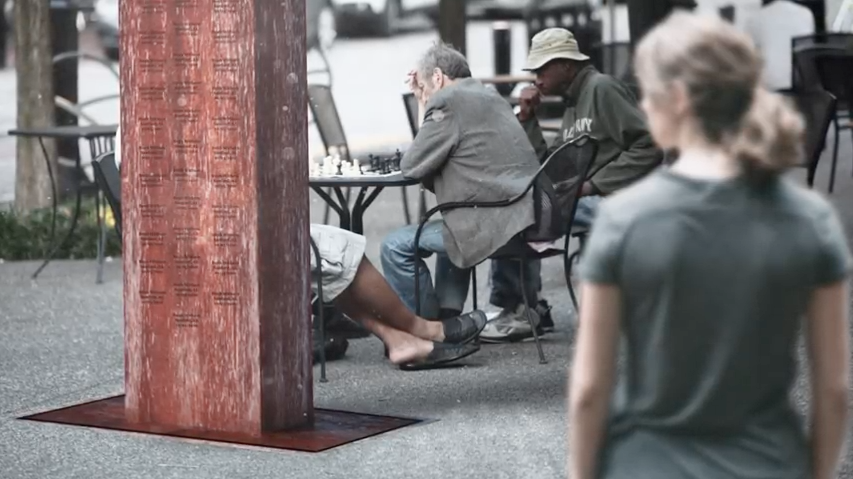 The museum and memorial are part of EJI’s work to advance truth and reconciliation around race in America and to more honestly confront the legacy of slavery, lynching, and segregation. “Our nation’s history of racial injustice casts a shadow across the American landscape,” EJI Director Bryan Stevenson explains. “This shadow cannot be lifted until we shine the light of truth on the destructive violence that shaped our nation, traumatized people of color, and compromised our commitment to the rule of law and to equal justice.” 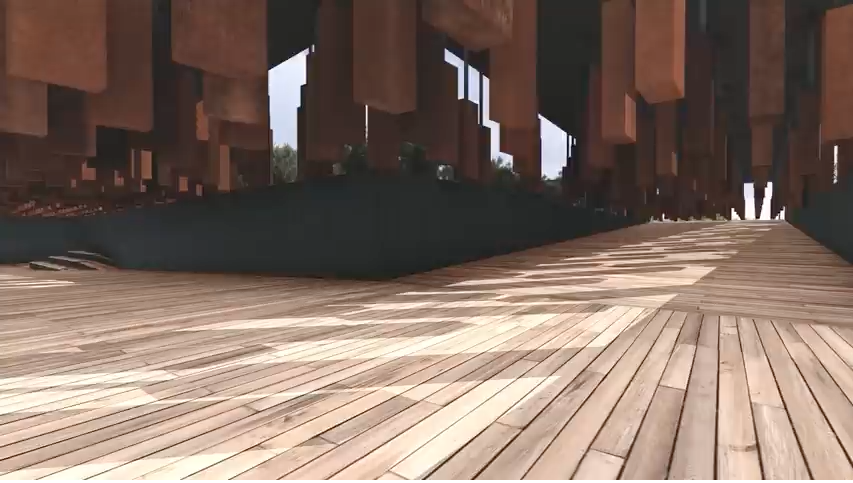 Modeled on important projects used to overcome difficult histories of genocide, apartheid, and horrific human rights abuses in other countries, EJI’s sites are designed to promote a more hopeful commitment to racial equality and just treatment of all people.